Reminder: Be careful with any new jack stand. 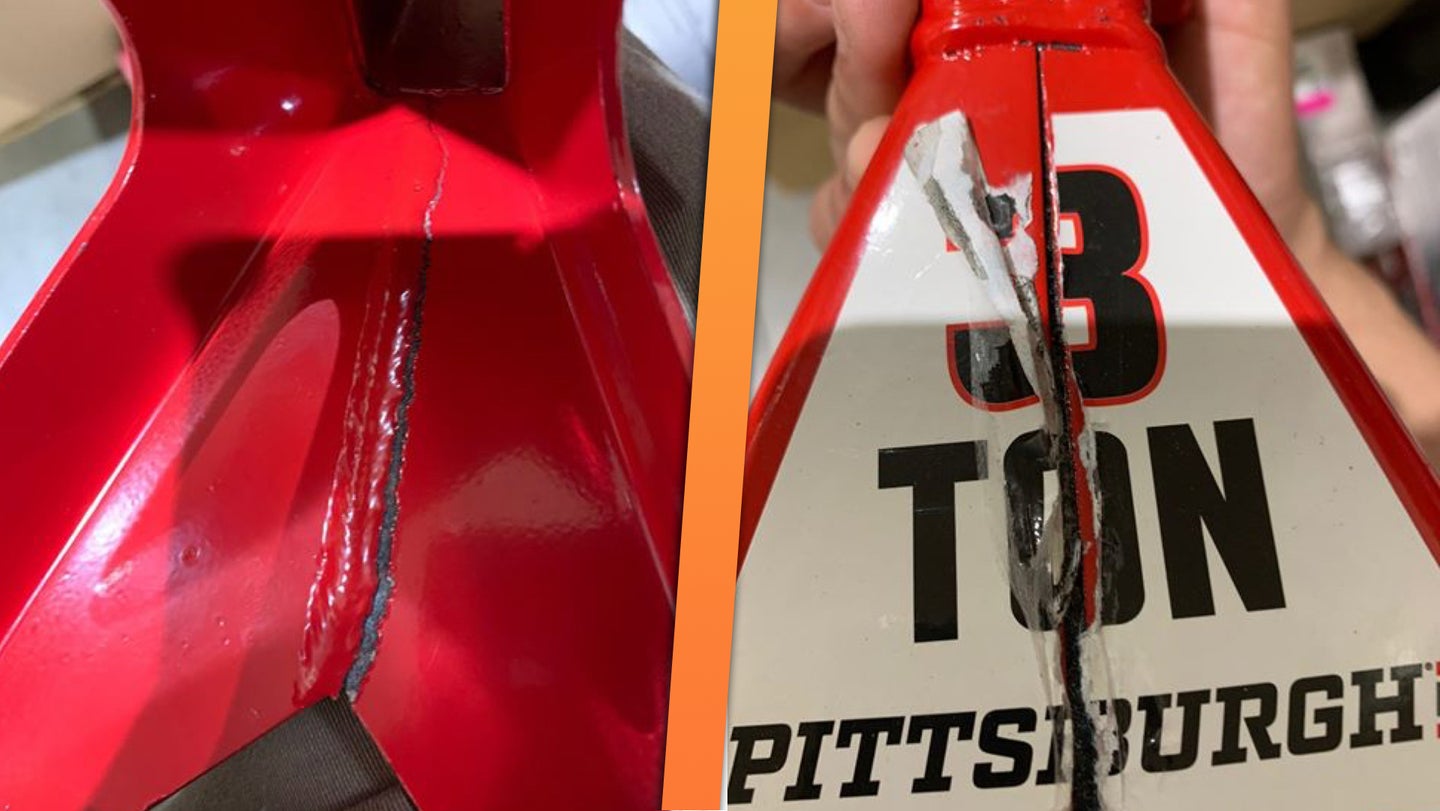 Jack stands are vital safety items for any work you do underneath your car, which is why the Harbor Freight Tools jack stand recall was such a big deal. Many of you may have their jack stands in your garage right now. Unfortunately for one Harbor Freight customer, a replacement for his warrantied-out three-ton jack stands failed, too

Mike Galli was about to do some maintenance work on his Volkswagen Golf using the replacements he got for his recalled Harbor Freight jack stands. As soon as the full weight of the car was lowered onto the stands, he heard a loud pop from the base of one jack stand splitting apart.

"Not too sure how a three-ton jack stand can’t handle the weight of a Volkswagen Golf," owner Mike Galli told The Drive.  "It was the first time using them as well after having swapped the previous recalled ones out."

Thankfully, Galli found the issue quickly and wasn't hurt. The stand, however, failed right at the weld holding the metal that was used for the base together.

"I’ve talked to most [of] the employees there and they said it’s the first one they’ve seen," Galli told The Drive.

It's unclear right now as to whether this is a one-off issue or something to watch out for on Harbor Freight's newer jack stands. Only a couple of commenters on 1320video.com's repost of Galli's photos at the time of this writing mentioned having similar issues with jack stands, one of whom confirmed that his issue also involved a weld failing on a Harbor Freight jack stand. We recommend paying close attention to the welds when you're shopping for jack stands, just to make sure it looks like these welds penetrate both sides of the seam well enough for a solid seal.

Harbor Freight is looking into the issue regardless, as a company spokesman noted in an email response to The Drive:

At Harbor Freight, the safety and well-being of our customers is of primary importance, as is the quality of our products. We take these matters very seriously and have already reached out to the customer to gather more information so that we may investigate this issue in depth.

Regardless of where you buy your jack stands and how solid they look, it's always a good idea to be extra cautious with new ones. Sliding a spare wheel or another chunky, solid item like a large piece of wood under your car is a good back-up in case there's an issue. Redundancy is always a good idea, too—consider using two or four jack stands instead of relying on only one.

(Psst: If you haven't checked your stands for the recall, you should do that now.)

Have you had any issues with your Harbor Freight replacement jack stands? If so, get in touch: tips@thedrive.com

This is all the metal that’s stopping thousands of pounds from falling on you.

The popular chain is contributing to the fight against coronavirus by supplying much-needed N95 masks and gloves.