They call come with labels advertising different weight ratings and such, but how much can they really take? 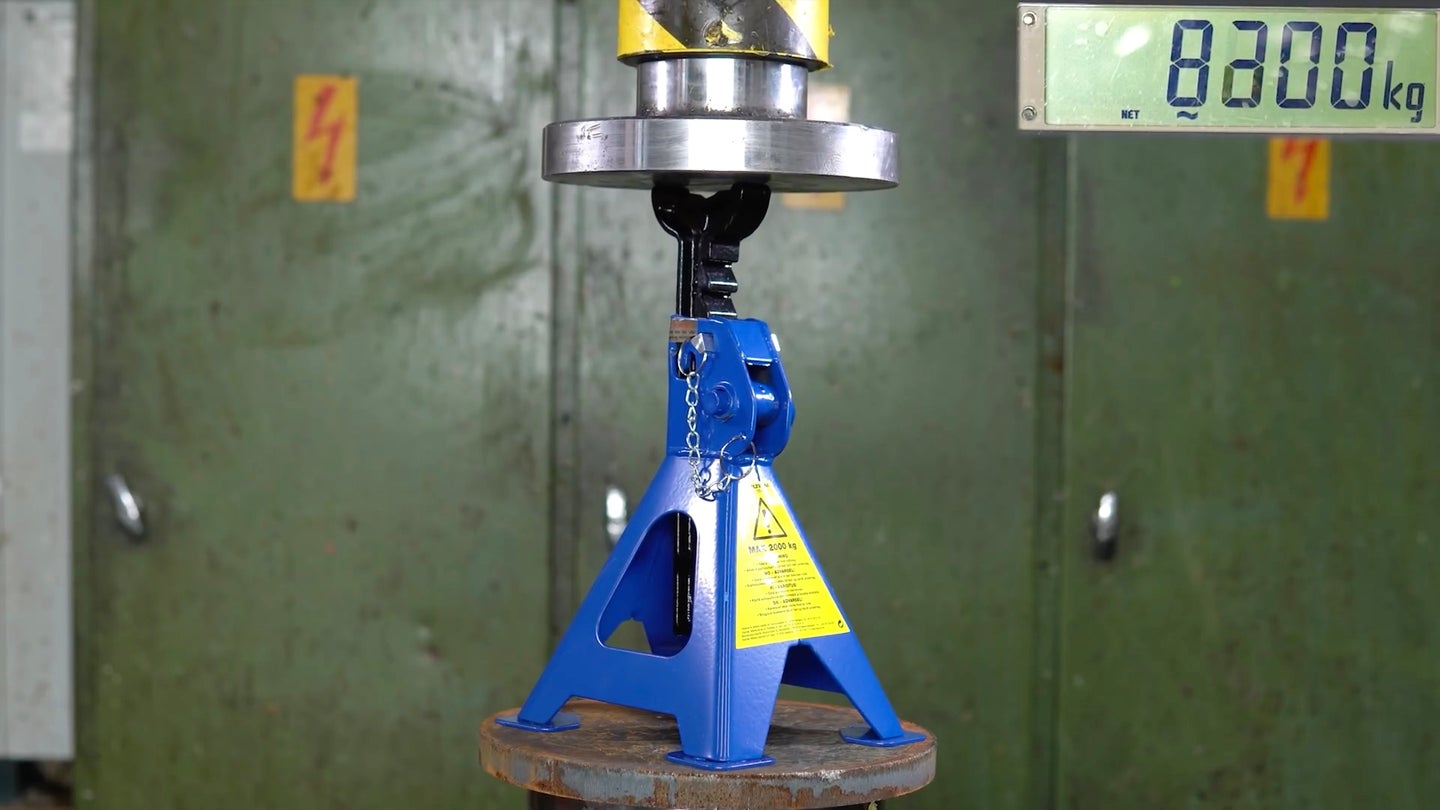 Nothing highlights the importance of trustworthy jack stands like Harbor Freight recalling nearly 500,000 badly manufactured examples, only to replace them under warranty with equally dangerous equipment. Safety just isn't one of those places where it's worth cutting corners, and if the aforementioned Harbor Freight debacle isn't enough to convince you thereof, allow a video by YouTube's Hydraulic Press Channel to do so.

Using its 150-ton hydraulic press and an appropriate force sensor, the channel's Finnish hosts found the limits of two varieties of jack stands and, just for fun, a scissor jack as well. A roughly pyramid-shaped style rated for roughly 4,400 pounds came first, making it a useful point of reference for anyone who either owns this type or has seen them on shelves of auto parts stores.

Tested first without a safety key in place, the stand withstood about 12,300 pounds before slowly buckling. Strangely, the stand failed more rapidly with the pin installed, though admittedly not before resisting some 18,600 pounds of force—more than 50 percent more than its pin-less brother.

A tube-style stand made from aluminum came next, with its three metric-ton rating surpassing the pyramid style by exactly half. Though being made from a lighter material, its design enabled it to resist around 27,500 pounds of force before beginning to collapse.

Last came a compact scissor jack like those often found in cars' emergency maintenance kits. These aren't truly stands, and are held in low esteem by mechanics as "widow makers" for reasons that quickly become obvious. Though it held 9,200 pounds before deforming despite being rated for a mere 3,300, its small footprint caused it to buckle diagonally rather than vertically. Because of this narrow contact patch with the ground, uneven surfaces (like roadsides) are known to make this style of jack unstable, and potentially make vehicles simply fall off them.

Note that all these tests were conducted using static forces, not with the dynamic forces a real vehicle can exert on a stand, and with perfectly flat opposing surfaces, rather than the often uneven (if not sloping) surfaces of many garages and driveways. Watching two-ton stand hold nine on the internet is not license to ignore your garage equipment's stated ratings, and should only be done by those wishing to win that most cynical of accolades known as the Darwin Award.

Half a million dollars buys you almost any supercar…or this.

Third time’s the charm, we suppose.