The 2.5-inch Smalltoe Is the Smallest Rideable Motorcycle in the World 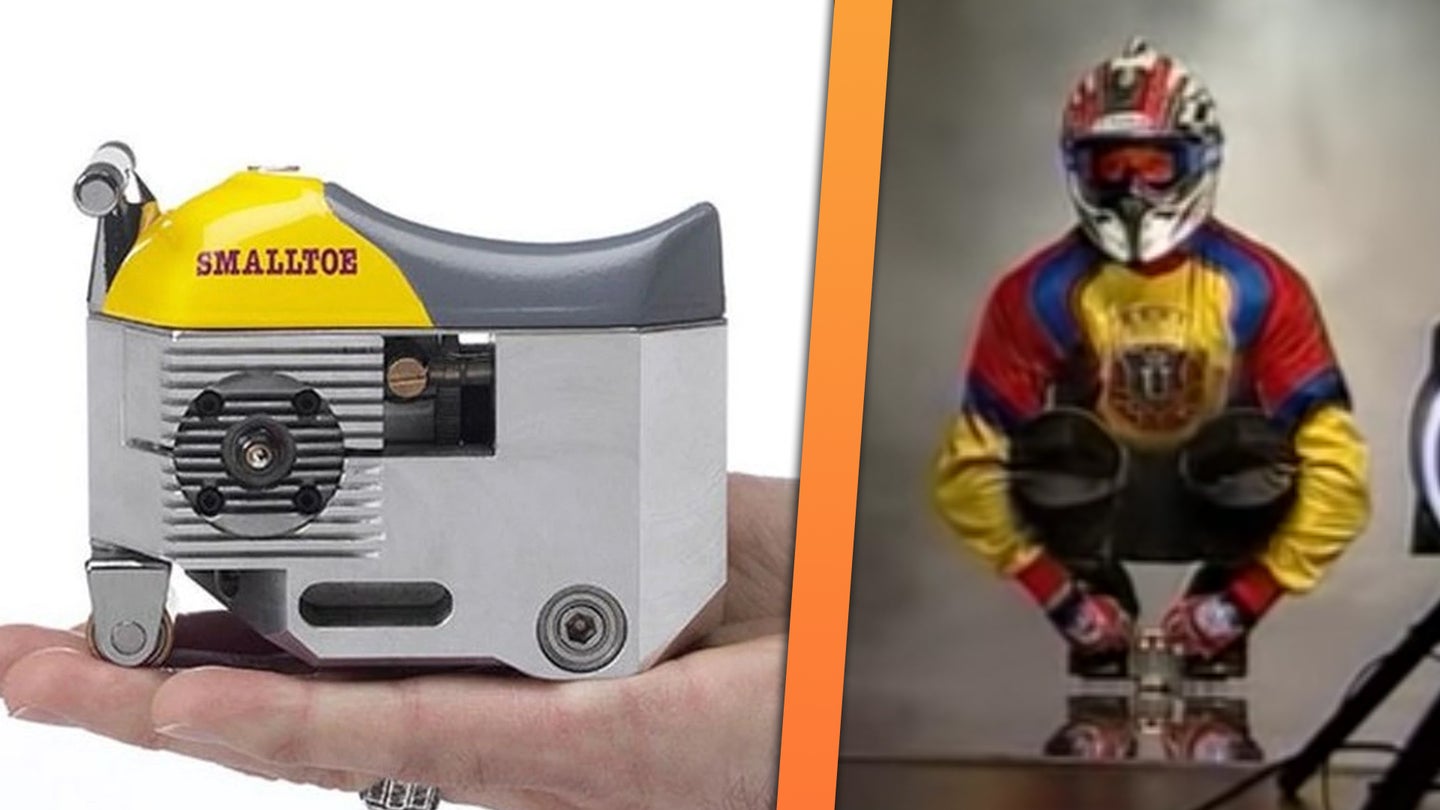 Everything eventually gets smaller, right? Cellphones got smaller, computers got smaller, Hell, even the EU got smaller this year. But thankfully motorcycles aren't part of that trend, unless you count those pint-size crotch rockets that used to terrorize neighborhoods everywhere (are those still a thing?). If they were shrinking by the year, logically you'd end up with something like this: the 2.5-inch-tall Smalltoe, the smallest rideable motorcycle in the world as certified by Guinness World Records.

The Smalltoe is the brainchild of Swedish inventor Tom Wiberg, who created it in 2003 after his record for the world's largest motorcycle (named Big Toe, of course) was broken. He may have assumed that the race towards ever-larger motorcycles could theoretically go on forever—has anybody tried using overland train wheels?—but he claims the sole motivation for creating the bike was to get in the Guinness Book of World Records for a second time, which he achieved.

Its dimensions are unbelievable for something that can support (let alone move) a rider: 2.55 inches tall, a 3.14-inch wheelbase and a 2.4-pound curb weight. The sub-one-inch wheels are more like flat rollers, and the entire thing looks like a chunk of steel with metal matchsticks for handlebars.

Power comes from a 0.3 horsepower, ethanol-fueled RC engine originally intended for model airplanes. This tiny single-cylinder motor sends its juice to the rear wheel via a direct gear drive. Thanks to what I'm assuming is a massive step down from the RPMs at the tiny crank, it's got enough grunt to push a person around at 1.2 mph.

Speaking of that person, the rider has to wear special shoes with integrated pegs in order to actually operate the miniature bike. The video below shows the record run back in 2003: a whopping 36 feet.

That lightweight and compact size would be convenient if the bike was actually ridable without custom made shoes and a few yoga lessons. Also, it doesn't look like the steering...works. Wilberg reportedly told the Associated Press at the time that he could've ridden even farther had a cabinet not gotten in the way. It also has no suspension or brakes, in case you were wondering.

Don't be looking for this bike at your local Harley dealer. Just one was made for the record-breaking attempt in 2003, and it isn't for sale as far as we know. We'll just have to live with larger two-wheeled transportation until this thing reaches mass production. I, for one, will be waiting patiently.