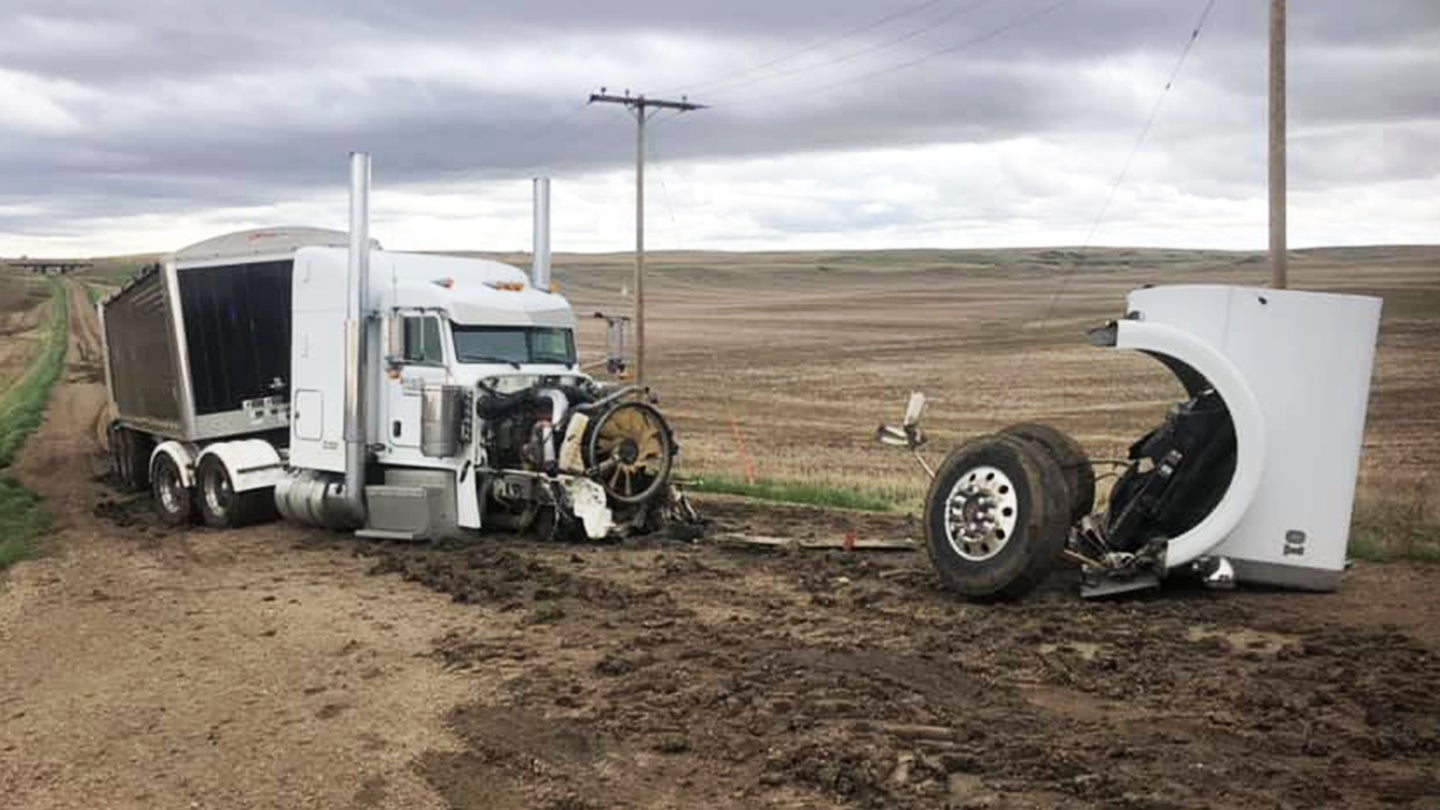 There's no way around it—no matter where it happens, getting stuck sucks. It's an embarrassing situation made all the more painful by the fees you'll incur from a professional tow service with the tools to safely extract your car from whatever mud hole or sand pit trapped it. But when there's heavy equipment involved, MacGyvering your own way out can easily end in disaster. A farming crew in Saskatchewan, Canada learned that last week when a tractor pulled the entire front end off a semi-truck that was stuck mere feet from solid pavement.

A local firm named Rosetown Towing was called in to retrieve what was left of the big rig and posted pictures of the aftermath on Facebook, where the admittedly engrossing scene has garnered lots of attention. The Drive spoke with Jamie Kemp, owner of the towing company, to find out exactly where the mistakes were made, so let’s try to unravel how this went so spectacularly wrong.

First, Kemp wants people to know that he didn't share these pictures to shame or poke fun at anyone. His goal is to prevent stuff like this from happening. He says it would have been a good idea to uncouple the truck and trailers to retrieve each part separately, because the load adds unnecessary weight behind the truck that then translates to extra force on the towing apparatus. Next, the damage indicates the tow strap was hooked to the front axle or another major suspension component instead of the frame.

Finally—and this is the biggie—using a farm tractor to yank the truck out of its muddy resting spot was a bad idea. As Kemp says, a proper towing rig has a winch whose pulling power is highly adjustable to allow for just the right amount of tension to get the job done. Even if an elastic strap was used, a farm implement doesn’t have that same level of finesse, instead relying on the initial jolt and brute force, which is how there ended up being two pieces of truck instead of one.

The moral of the story is to save this kind of thing for a professional towing company. Kemp said that the potential for even more property damage or physical harm runs high when this sort of thing is done incorrectly. If a chain breaks under the pressure of pulling, anyone nearby faces a high risk of fatal injury. He was emphatic when he said that he's seen all manner of broken windows and destroyed vehicles when an amateur towing job goes wrong. At that point, the least of your worries is being embarrassed about getting stuck in the mud.

…and immediately send it to 90 mph on the highway.

The internet thinks this trucker crushed his boss’s Ferrari over missed paychecks. The truth may be a lot more complicated.