The truck crashed into parked cars at 80 mph and flew into the air before flipping multiple times. 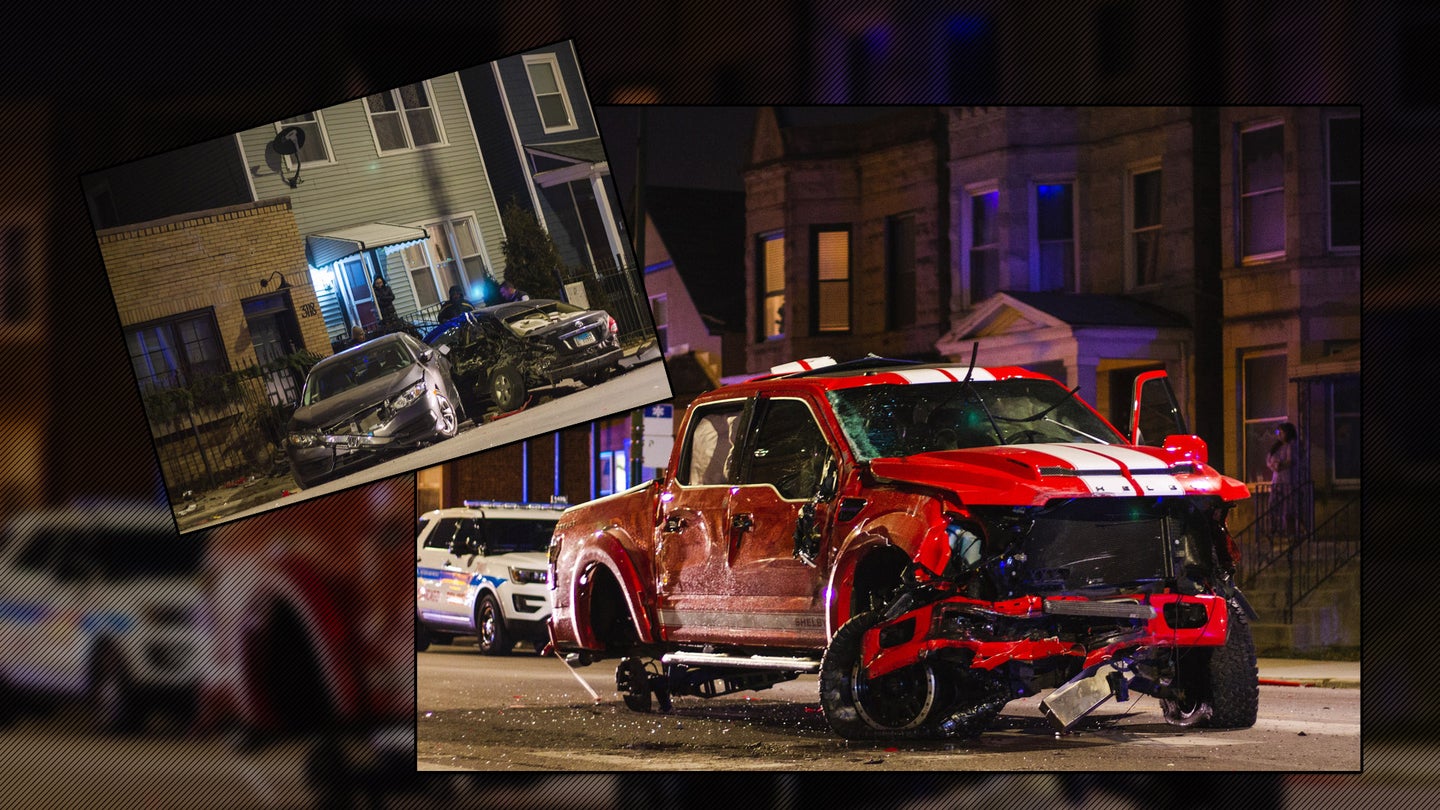 The driver of a Ford Shelby F-150 pickup truck learned that high-horsepower machinery and reckless driving don't mix well, especially when you add the slippery road conditions of a place like Chicago in the dead of winter.

According to the Chicago Police, the driver of the bright-red Shelby truck crashed last Thursday at approximately 8:30 p.m. in the 3100 block of West Diversey Avenue while driving at speeds upwards of 80 miles per hour. The force of the crash was so immense that it sent multiple cars flying into a fence upon impact, which by the looks of the photos provided to The Drive by nearby resident John-Rhys Garcia appear to be a Pontiac G6, Chevrolet Cruze, and Toyota Yaris.

The truck itself was allegedly catapulted into the air when it made contact with the parked cars, causing it to flip over before landing back on the ground. The photos show the destructive aftermath of the crash, with red pieces belonging to the truck scattered all over the intersection and cars blocking sidewalks and entrances to people's homes. A photograph even shows an entire wheel and brake assembly sitting in the middle of the road, giving un as an idea of how hard the initial impact must've been.

"It almost looked intentional when he hit the cars,” a witness told Block Club Chicago. “It was very shocking. It felt like a movie.”

The truck itself, which is most definitely a complete write-off, appears to have held up rather well given the magnitude of the crash. All airbags can be seen deployed and the bed of the truck and its tailgate completely broken/bent, but the cabin itself appears to have done its job of protecting the driver.

Speaking of the driver—who can consider himself lucky for walking away from the shunt—fled the scene shortly after the crash. It's unclear if he had ulterior motives to hide from the police (besides the fact that he had just destroyed an entire block), but unluckily for him, a subsequent call to the police for a home break-in allowed officers to catch up to him, place him under arrest, and throw him behind bars. It appears that behind the wheel or afoot, that guy was up to no good that particular night.

The havoc caused by the reckless driver is clearly considerable, especially as the majority of the damage was performed to innocent people who did nothing wrong but park their cars on a public street that given night.

There's no word on what kind of Shelby F-150 this particular unit was, but it was most likely a stock unit with a 5.0-liter V8 under the hood, which produces 395 horsepower when unmolested. Shelby also offers a high-performance Super Snake variant that produces a robust 755 horsepower courtesy of a supercharged V8. Overall, it's a bad week for Shelby-badged vehicles, as earlier this week a transporter carrying two brand-new Shelby Mustang GT500s suffered a rollover crash that resulted in one or two vehicles destined for members of the Ford family being totaled.