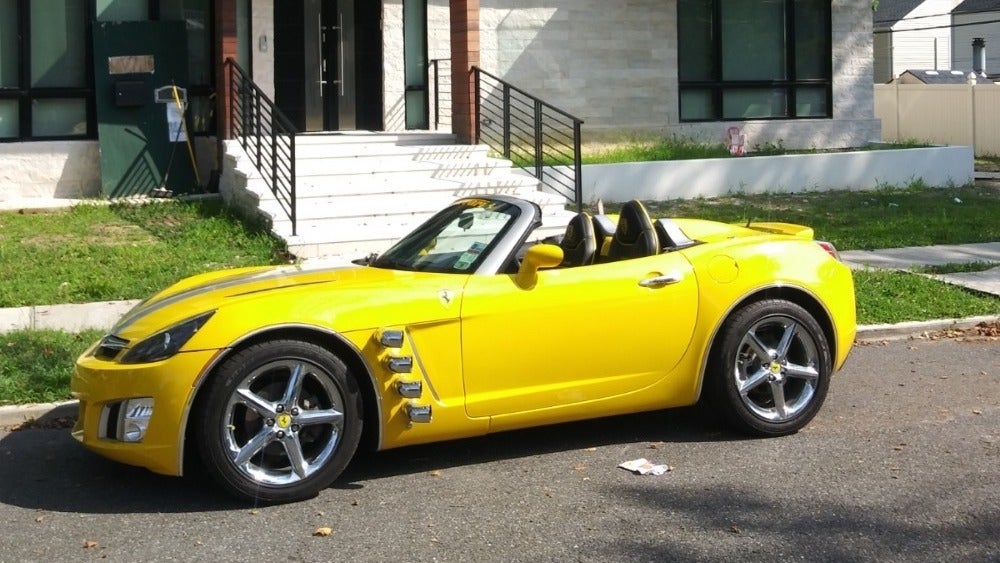 The Saturn Sky never really got the respect it deserved, ya know. It was the Cinderella to its sister the Pontiac Solstice—prettier and equally modifiable—but much less popular among General Motors diehards who considered Pontiac the superior brand. The Fairy Godmother that is time will one day deliver the Saturn Sky to collector car stardom, but not today, for the world isn't yet done wronging the Sky, as this example listed on Autotrader demonstrates.

At a curbside glance, this Sky looks like a great example of an under-loved sports car. It was ordered in a sunny yellow with the optional Redline package, which upgraded its engine to GM's highly tunable 2.0-liter EcoTec. It also has a mere 32,000 miles on the odometer, so that punchy engine should have plenty of life left in it. A closer look, however, reveals the horrors inflicted on this Sky by its owner, which starts with its exhaust. This quad-tipped, fender-exit system would be a unique-sounding setup if it were real, but as under-hood shots show, it isn't.

It gets worse when you begin noticing the numerous Ferrari badges slapped onto seemingly every flat surface. Assuming the owner applied the Prancing Horse and other Ferrari motifs symmetrically on both sides of the car, we count 14 such logos, which is 14 too many for a car engineered entirely by GM. Five of them can be found on the car's interior, which reveals another sad secret about this would-be Disney princess: it's an automatic.

So, it's a low-mile car, but those stick-on stripes and Ferrari badges will be tough to remove, and it has the wrong transmission. Given the effort it'd take to bring it back to stock, this is a $10,000 car at the very most. However, its owner calls the car a "one-of-a-kind customized show car." For their "Ferrari prototype," they want $34,900, which can instead net you a low-mile C6 Corvette Z06. Even to Saturn Sky stans like us, the choice between these two front-engined GM sports cars is easy.

Got a tip? Or photos of a stock Saturn Sky to take the taste out of our mouths? Send us a note: tips@thedrive.com