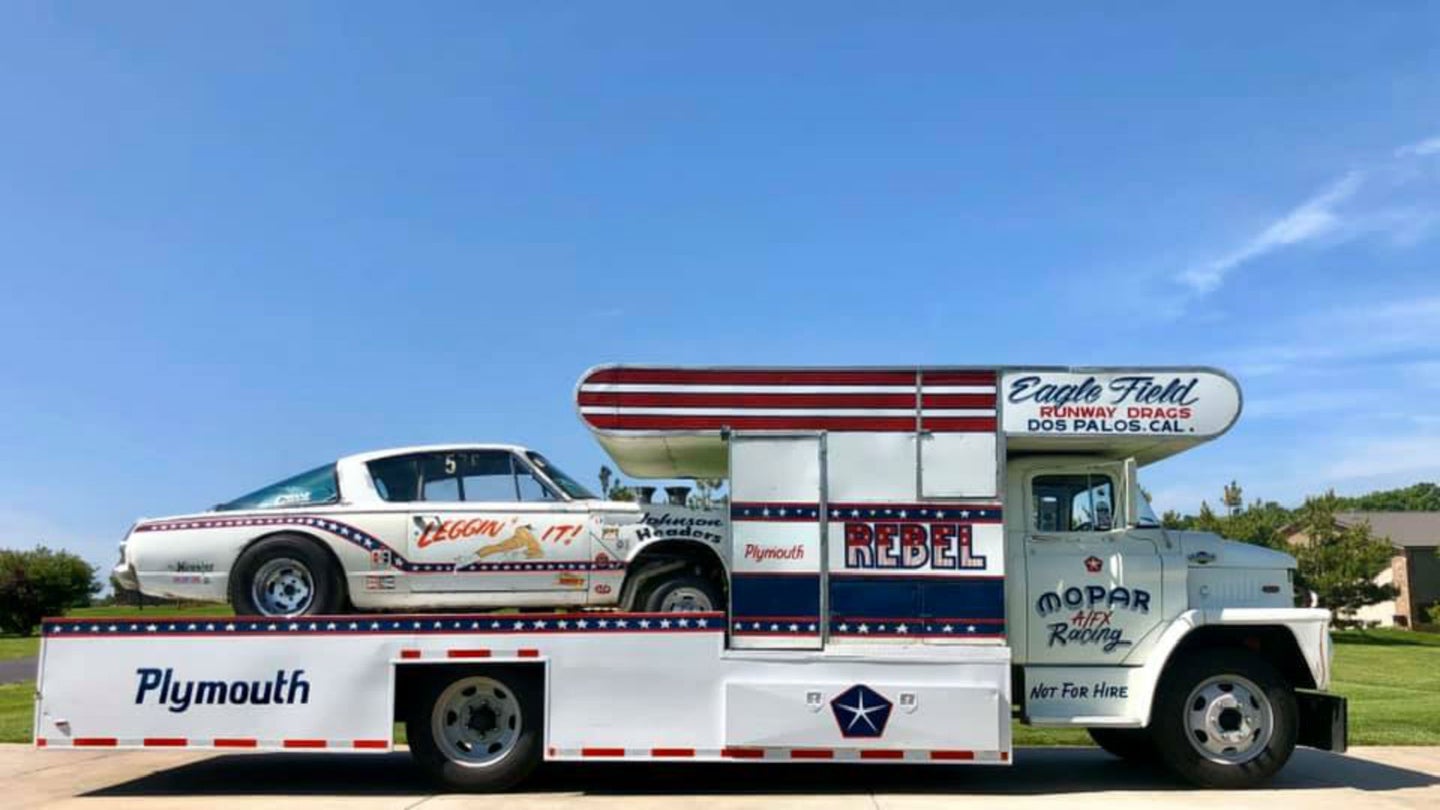 Hot-rodders treasure the period that their vehicles come from, using muscle cars as a sort of way to bring that era into the new age. They go through the trouble of sourcing original parts or seeking out aftermarket upgrades built by well-known names within the community, all to save their hobby's traditions. It can often take years to acquire a shop full of hoozits and wutzits, but right now, there's an opportunity to scoop up a hunk of drag racing nostalgia with this stellar 1960s Mopar gasser and hauler combo.

As it seems, this 1966 Plymouth Barracuda and 1965 Dodge C300 truck were made for each other. They both sport red, white, and blue liveries (with stars, of course) that've been worn and, to real racers, improved over time. Each features a Chrysler-built V8, although one's a bit more potent than the other, and the two are being offered for sale together for $42,000.

For starters, the commercial-grade Dodge hauler can carry a modest garage's worth of parts and tools as well as the '66 Cuda without a hitch. It's powered by a 318-cubic-inch engine, which then sends power to a four-speed manual transmission before ending up at the two-speed rear end out back. The seller claims this powertrain setup to be as bulletproof as they come, saying they drove it from California to its current home of Missouri—a 1,850-mile roundtrip—and it supposedly never skipped a beat.

There's also a sleeper cab fitted to the truck for those long-haul adventures, continuing the theme of comfort that's supported by a new power steering system and even a working heater.

The Plymouth Cuda, then, is a treasure in more ways than one. It wears its battle-scarred body with pride, paint chipped and rear quarter-panel slightly creased from one good time or another. Starring underneath the hood is a 383-cubic-inch big block with a 13.5:1 compression ratio and a solid lifter cam. Dual velocity stacks gouge out the top while the headers dump behind the front tires with enough noise to wake long-gone Mopar brethren from the grave.

Triple stick shifters highlight the otherwise spartan interior that's main aesthetic is bare metal and rivets. Memories are stickered throughout the Cuda's cabin and, if you look through the passenger window, you can even spot the car's original NHRA number. A roll cage envelops the space, as you'd expect and hope, aside from the quintet of gauges mounted on the dash, there's not much else to speak of, which is exactly how we like it.

Vintage lettering—from the car's "Leggin' It" moniker to the truck's stylized "Mopar Racing" sign on the driver's door—completes the look. This dynamic duo will turn heads wherever it goes, and it deserves an owner that'll take it from town to town and event to event with one intention: to have a blast.