What Americans love the most in the sub-$20,000 range among new cars. 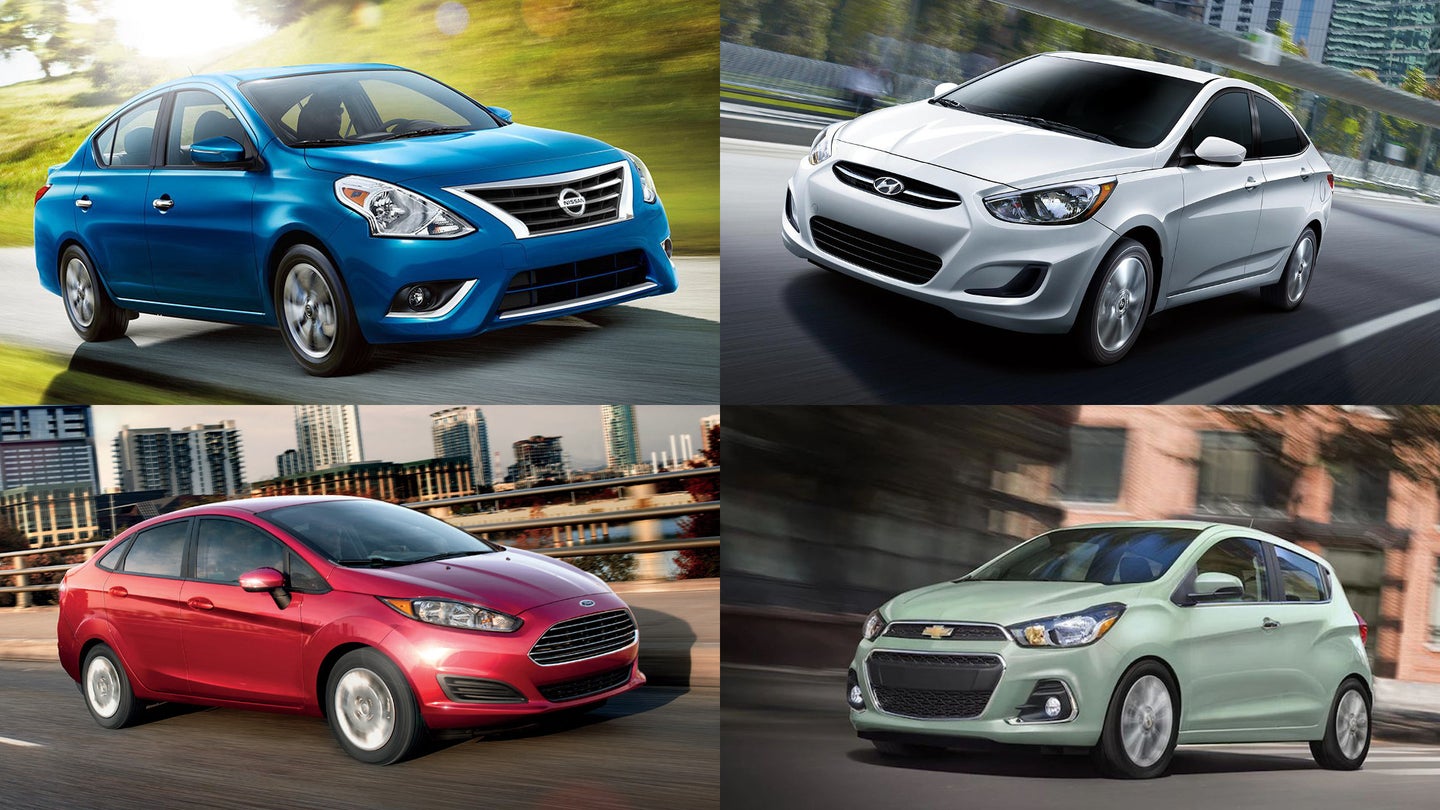 At around $35,000, it's no secret that the average price of a new car in the United States is just too damn high for a lot of people. Inflation plays a big role, but so do all the creature comforts, safety features, and technical refinements that consumers have come to except as standard in even the lowliest of econoboxes. Still, that's hardly a consolation to those who can barely afford a five-digit price point.

But even in this age where it seems like almost every brand will sell you something insanely expensive, there are still deals to be had—that is, if you can overcome the perception bias that spending under $20,000 on a new car automatically means you're getting something cheap and flimsy.

Starting with a list of the ten cheapest new cars (by base automatic transmission model) on sale in the country today, car-buying service Carjojo analyzed where exactly buyers were springing for these bargain specials the most from May 2016 to last month. They ranked the top twenty metro areas by the percentage of new car sales that counted as qualifying "cheap cars" in each one. Again, this wasn't by total volume, but rather market share.

With its low gas prices, reasonable cost of living, and practically zero need for all wheel drive—traits are shared by many in the top ten—Phoenix, Arizona came out the winner with cheap cars taking 3.6 percent of the market. Meanwhile it's the Motor City bringing up the rear, as Detroit's extensive used car market, harsh winters, and economic troubles meant cheap cars only accounted for 0.4 percent of new sales.

Once they established where these cars were selling, they dug into the numbers even more to figure out which of the top ten cheapest cars on sale all those buyers loved the most. A total of 75,818 of these ten cheapest cars were sold in the areas studied, and the rankings below represent the sales of each model and the percentage they comprised of the total cheap car sales. Price is also included.

The Smart ForTwo may be the smallest car on the list—which you'd think would be useful for parking in metro areas—but apparently buyers find the tiny proportions just too constraining, and possibly disconcerting on our crossover-clogged roads. It's never been a hot seller in this country, and as a result Smart is ending sales of the gas-powered ForTwo at the end of the year, replacing it with their electric model with the unfortunate suffix of ED.

The Kia Rio was actually redesigned for its fourth generation midway through the study period, but it doesn't look like that provided much of a boost. Even though it gained more attractive sheet metal and a few inches in size all around, losing 8 horsepower and 4 lb-ft of torque in the name of fuel efficiency probably didn't help sales much in the land of cheap gas.

We're not going to pull any punches here—the Mitsubishi Mirage is not a great car. Cheap cars don't have to feel cheap necessarily, as evidenced by all the cars higher up on the list, but the Mirage generally fits that description to a T. The CVT is pretty anemic, the interior materials are not quite of this decade, and the underside of the hood is covered in white primer with a hint of body-colored overspray.

Like all Toyotas, the Yaris enjoys a slight sales bump thanks to the brand's legendary reputation for quality—but that's probably it. Toyota memorably marketed the Yaris with a series of wink-wink commercials bearing the slogan, "It's a car." Yes, yes it is, and with its budget-motel interior and plodding acceleration, it's not much more than that.

The Fiat 500 has ridden its striking retro looks and Italian styling all the way to mediocre sales success. Not much has changed both on the outside and under the hood since the 500 first visited our shores in 2012, and while their strangely-sexual ad campaign didn't really seem to move the needle, buyers have regularly bought into the little car—so much so that it's been one of the few non-SUV bright spots for Fiat-Chrysler amid 2017's industry-wide sales slump.

Chevy opted to refresh the Sonic last year, adding a new interpretation of their current corporate fascia tweaking a few bits and bobs on the interior to create a pretty handsome-looking little package. The same-old-same-old 1.8-liter four-banger still putting out 138 horsepower, which is more than several of the other entries on this list. It's not quite a great car, but it's come a long way from General Motors' first attempt at a tiny cheap car in the lackluster Chevy Aveo.

The Spark is another car that's come a long way in a decade, and it's reflected in the little hatch's current popularity. It's certainly a small car—only 143 inches long and 63 inches wide—but Chevrolet has been wise to market its safety features, and apparently buyers have been paying attention. The Spark's current generation debuted at the end of 2015 and has been generally well-received by critics. Standard Apple CarPlay and Android Auto surely don't hurt either.

The Ford Fiesta ST has long been seen as one of the top hot-hatch values out there, but its regular-trunked sedan sibling has proven to be a decent hit among bargain shoppers. The little car handles well and features a interior that does a good job of blocking out wind and road noise. It's not as well-proportioned as the hatchback, but a small price drop from last year's model has keep the Fiesta moving off dealer lots with relative ease.

The Hyundai Accent is an extremely solid economy car—and we mean that in the best way. None of these cars are terribly well-equipped at the base model level, but the Accent doesn't pretend to be anything else. There are no options for navigation, leather seats, or even a sunroof available. Instead of spending money to add those features on the production line, Hyundai instead invested in creating a simple, honest car that carries the DNA of the econoboxes of yore without feeling flimsy.

While the prices didn't always line up the rankings here, the Nissan Versa is both America's cheapest new car and its most popular under $20,000. There's nothing particularly noteworthy about the Versa other than its price point. The CVT and underpowered engine make it uninspiring to drive, the interior feels every bit like a $14,000 car, and the standard features are very limited. Even though you'd probably be better off with a much nicer, gently-used car at the same price point, the idea of driving something factory-fresh under warranty for that cheap was enough to propel its sales head and shoulders above the competition.