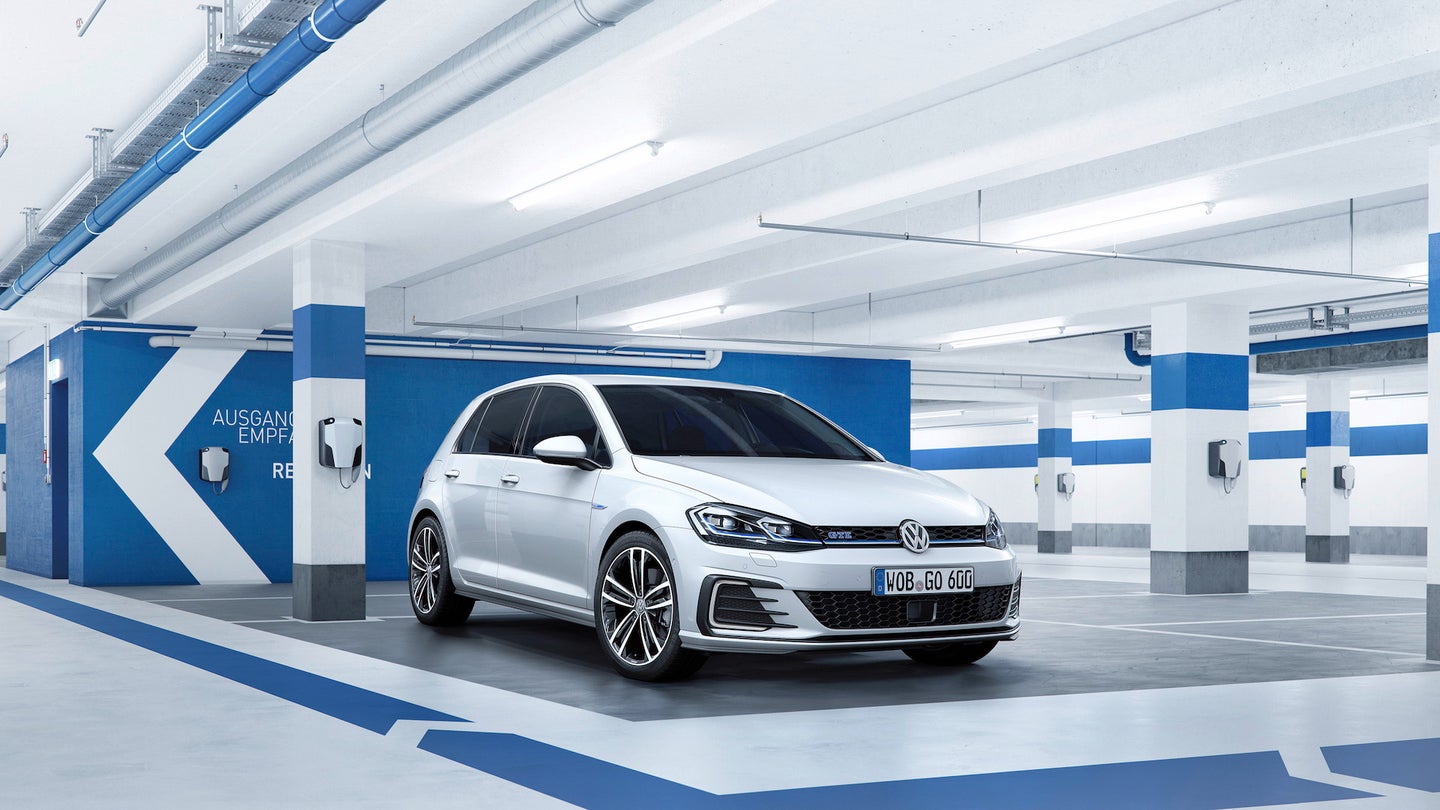 Electric cars are everywhere now. Despite their still relatively small market share, electric cars are impossible to miss. Supermarket parking lots, parking garages, and even gas stations are are filling up with EVs—for good reason.

With electric car development gaining speed across the industry, the cars are becoming more usable, more user-friendly, and more affordable—though EVs make up less than 1 percent of cars sold in the United States, subsidies and a marketing push by automakers are driving more consumers to buy these earth-saving vehicles. There are around 30 different electric car models to choose from now, and more OEMs than ever bringing electric or hybrid-electric cars to the market. So how do you actually choose which one would work well for you?

We can help. The Drive has put together a list of the best electric cars on the market right now. We've searched far and wide for the right options, road-tested them, and spent enough time with each car to figure out which would work as the best daily drivers for you, our reader.

The list we've put together is made up of both gas-electric hybrids and full-electric cars—all of which are already on the market can be bought. There's a range of affordable electric cars, luxurious EVs, and back-road friendly electrics as well. Basically, if you're interested in an EV, there's a good chance there's one for you on this list.

The Toyota Prius Prime is like a normal Prius that takes itself more seriously. It has plug-in charging capabilities, a bigger battery pack (and one less seat because of it), an extra electric motor, and even some carbon fiber sprinkled around. The car's lithium-ion battery allows the Prius Prime to travel an estimated 25 miles on electric power, and then once it's drained, the car is able to see 55 MPG city. In total, the car can manage a range of 640 miles, according to Toyota.

Though the Prime and the normal Prius don't differ massively in performance, the Prime delivers the sensation that you're on top of the EV curve more than the non-plug-in model. The Prime's Tesla-esque 11.6-inch infotainment screen helps with that.

At $27,100 before tax breaks, it's a solid, affordable option for those who aren't yet ready to make the jump to the world of full electric.

Though it hasn't been offered in America, one of our favorite electric cars in the world is the Volkswagen GTE. This German hatch is an electric-hybrid version of the five-door Golf that's packed with a 1.4-liter 148-horsepower gas engine and a 75-Kw electric motor. According to VW, that combined powertrain can make for a range of 514 miles or a full-electric range of 31 miles. Additionally, the car can do 0-60 in 7.6 seconds and has a top speed of 138 miles per hour.

The GTE is also offered with VW's Traffic Jam Assist semi-autonomous driving function that helps the driver pilot the car through traffic at speeds up to 37 MPH. As for interior gadgetry, GTEs can be fitted with 9.7-inch displays with gesture control.

The cool thing here is, it's still a Golf. Everything in it just works—well, except for when it doesn't. But now, with the help of some additional electricity, it has exceptional range.

The Hyundai Ioniq Electric pushes the boundaries of how much electric car you should be able to get for $29,500—even more so at $22,000 after tax incentives. Rated to have a full-electric range of 124 miles, the Ioniq Electric is a usable, easy-going electric car that won't confuse or distract recent EV adopters, but that doesn't mean it's tech-less.

The Ioniq Electric can be had with auto emergency braking and technology to detect pedestrians in the car's path, lane departure warning system, blind spot warning, a rear cross-traffic system, and a rearview camera. The car also has wireless smartphone charging and Apple CarPlay—so it's not really missing anything you'd expect it to have.

You just can't do better in the EV market for that price. Even if you're not the biggest Hyundai fan, the Ioniq Electric isn't a bad car to drive, and in fact, over time you might just start to enjoy it.

The Volvo XC90 is a fantastic rig. Its interior feels like quality, it's unreasonably safe, and with its plug-in hybrid powertrain, the SUV is good for 54 MPGe highway and 53 MPGe city. Though with a starting price of $67,800, it is a bit more than the base $47,50 car, the plug-in hybrid has an 87-HP motor.

That means that somehow, Volvo stuffed an inline-four motor that's turbocharged, supercharged, and also electric-boosted in the heart of its SUV. Who thinks of this stuff?

The good news with the XC90 is that it's just as good-looking as it is safe. Even though it's a mid-sized SUV, it doesn't look or feel bulky. It's just the right size, it's good at what it does, and it's a more-than decent looking car. If you can make sense of its price tag, this should be at the top of your list of SUV favorites.

It doesn't take much searching in Cadillac's model range to find a comfortable, attractive, and reasonably priced sedan. That's because the brand has cars like the CT6 and the CTS. Heck, even the ATS holds its own against its European competitors.

The thing is, though, some people—probably like those who are reading this post—want something that's more than just pretty and cozy, those people want a car that is also doing its part to save fuel and release fewer emissions. Those people would be interested in the CT6 Plug-in.

In total, the electrified CT6 puts out 335 HP through a turbocharged 2.0-liter four-cylinder engine and a dual-motor lithium-ion setup. According to Cadillac, the car has a range of 440 miles with both gas and electric power and it can also clock in 31 miles on one sole charge. With this powertrain, the CT6 launches from standstill to 60 in 5.2 seconds, according to Cadillac.

For many people, the Tesla Model 3 may seem like the obvious entry, but in reality, it only just made it on here. The list is compiled of the best EVs on the market, and according to Tesla CEO Elon Musk, the first Model 3s won't be delivered until Friday, July 28.

If you're unfamiliar with the Model 3, we'd be astounded since it's been across all EV news ever since it was unveiled in early 2016. This is Tesla's entry-level car. Starting at $35,000 before incentives, the car will be worthy of a five-star crash test rating (according to Tesla), and will have 215 miles of range on a full charge. It will also have access to the company's network of Superchargers. Additionally, the cars will be fitted with Tesla's Autopilot hardware and can be optioned with semi-autonomous driver assist functions.

The hopes are that the Model 3 will be a Model S on a budget. From what we've seen so far, that'll indeed be the case. Unfortunately, until we get our hands on one, we can't be too sure.

For about $37,500 before tax breaks, you can buy a fully-electric car with that's capable of driving an estimated 238 miles of range and can do 0-60 in less than 6.5 seconds. That car is the Chevy Bolt, and those performance capabilities make the Bolt a pretty damn good deal.

Priced similarly to the Tesla Model 3—a car that you'll also find this on the list—the Bolt beat the entry-level Tesla to the market with time to spare. It's also quick, nimble, and we've even seen it turn gas-only gearheads into EV lovers firsthand. It's almost magical.

One of our favorite features on the Bolt is the car's push-button "Regen On Demand" system. Holding the button slows the car down without pushing the brake pedal and allows the car to push energy back into the battery. That might sound weird from here, but when you try it in person, it's pretty sick.

The Tesla Model S feels like the pioneer, or even the grandpappy, of all electric cars, but it truly isn't—electric car development has been around since the late 1800s. But the reason why it feels that way is because it didn't truly catch on until the Model S. Average consumers didn't take EVs seriously until the Model S started to become a status symbol following its release in 2012.

There's a good reason why the Model S caught on, though—it's a pretty damn decent car. Though the Model S hasn't changed much on the outside since its grand entrance to the market in 2012, the car has been upgraded countless times—both minor upgrades (over the air) and major—and it remains one of the most high-tech cars on the market. It's disgustingly quick, it has about as much semi-self-driving tech that a car can legally have today, and it still hasn't really gone out of style. Right now, the Model S starts with the $69,500 75 kWh trim level that delivers 249 miles range and manages 0-60 in 4.3 seconds.

Nothing on the market can match the LC500h—at least not in looks. There's just something about it that feels unparalleled by everything else out there. To us, it's just a plus that it's available in hybrid form.

Speaking of hybrid form, the LC500h comes with a 295-HP, 3.5-liter V6 motor and two electric motors that bring the power output to 354 HP. There are also two transmissions—a CVT and a four-speed automatic. The dual transmission setup helps keep the car's shifts feeling conventional and in the direction of what most sports car drivers might be used to, but also allows the car to maintain an MPG rating of 30 combined.

And at 30 MPGs, what a stunning car this thing is.

At $156,000 starting, the Acura NSX is a bit of an outlier on this list. Unlike most of the cars on this list, the NSX is a 573-HP hybrid-electric supercar. Not a compact, not an SUV, not even a sports sedan—it's a supercar.

The NSX can do 0-60 in 2.7 seconds and has a top speed of 191 MPH. The thing is, unlike most other $160,000 sports cars, the NSX has a high-tech drivetrain that consists of a twin-turbocharged 3.5-liter V6 engine mated to a nine-speed DCT transmission in the back. In the front of the car, the NSX has twin-motor unit that sends power to both front wheels. Pretty trick.

Basically, the car performs just as well as it looks, and has all the hidden tech to back it up.