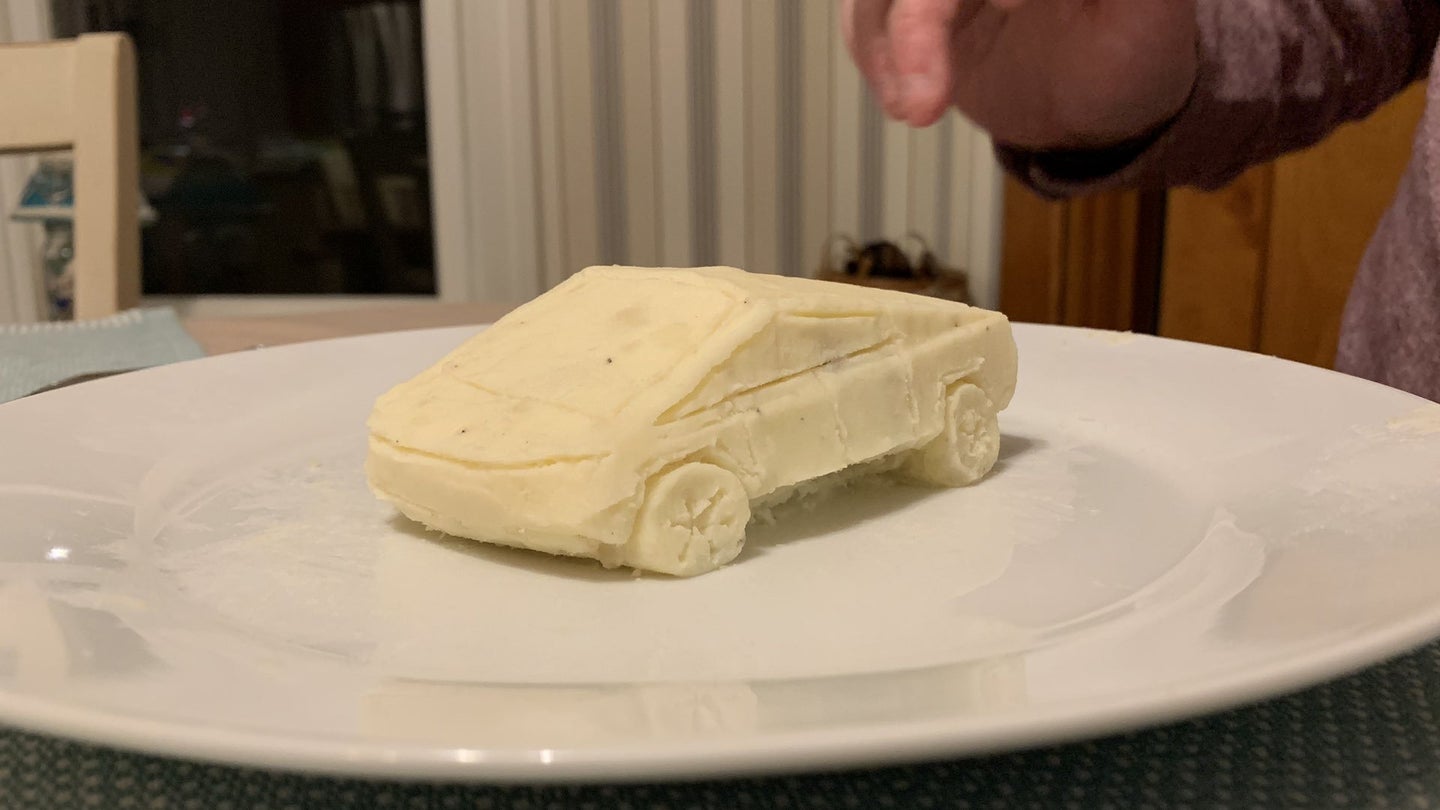 Once upon a time, your parents may have told you not to play with your food, especially during family dinners. Well, it appears that 30-year-old Greg Milano didn't get the memo, because he took it upon himself to carve a Tesla Cybertruck out of mashed potatoes during last week's Thanksgiving dinner. And for his admittedly awesome creation—we're naming him the king of Thanksgiving.

Milano's brother Dan live-tweeted Greg's tater masterpiece to the internet, and since the Bladerunner-inspired pickup was already in the news cycle from being announced just one week before Turkey Day, it was immediately eaten up by the masses. Since Saturday, the viral video of the potato Tesla has racked up an astounding 3.9 million views.

Using only a butter knife, the mashed potato Michelangelo carefully shaped his spuds into the boxy shape of the pickup and carved out the sharp body lines to match. He dug out the bed to hold a river of gravy to flow from the integrated tailgate ramp and intricately carved the web-like pattern of the wheels into the side. For maximum effect, Milano even smashed the windows to continue the running gag of the Cybertruck's biggest launch folly when lead designer Franz von Holzhausen accidentally broke the windows while attempting to show off their strength.

The result was a creation that even his parents would be proud of.

"I am just a big kid," Milano told CNN. "Pablo Picasso summed it up well: 'Every child is an artist. The problem is how to remain an artist once he grows up.'"

In case you were wondering, this isn't Milano's first mashed potato-themed rodeo. In fact, it's become an unofficial tradition for the food artist. Over the past years 20 years, his sculptures evolved from simple volcanoes to complex masterpieces—including the DeLorean time machine from Back to the Future, the White House, a Lego figurine's head, and even the Guggenheim museum. Milano mentioned that in recent years, he's pulled his inspiration from the news, so it's only natural that the Cybertruck became this year's focus.

And no, the food didn't go to waste. After it was completed and gravy flowed from its bed, Milano ate every bit of it.