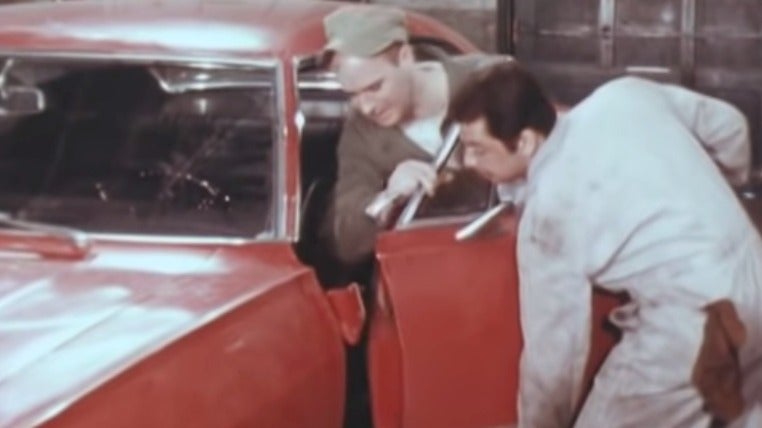 In the 1970s, car theft was a tremendous problem, reaching two or three times the rates that we see in the most crime-ridden areas today. Law enforcement was understandably determined to tackle the problem head-on, and had some period-correct trickery up its sleeves to do it. This FBI training film shows, in dramatic '70s fashion, how vehicles were snatched, “chopped," and then discovered by police in a time when eight-track players were considered high tech.

The film called “Examination of Stolen Cars" is way more entertaining than the title implies. If you're able to make it through the roughly 20-minute run time, you’ll witness a “theft” in action where a car is fake-stolen and has various parts swapped out to make it appear to be a legitimate vehicle. The thieves swap in VIN plates from a wrecked car and paint the whole thing a different color.

While the theft and subsequent “chop” were pretty smooth, the getaway wasn’t. After leaving the shop, the driver runs a red light and earns attention from the police. In the most typical '70s movie police chase ever, the thieves are able to evade the 5-0 and ditch the car to run away after getting a flat tire. The police arrive to find a normal-looking car with no signs that it has been stolen and given a makeover. At the impound lot, technicians fingerprint the car and poke around to find things like a swapped VIN plate, eventually finding out that the thieves swapped out entire body pieces to make the car look legit.

In light of today’s technology, the training film’s investigation techniques look downright primitive, especially when we consider that police can now run a VIN nearly instantaneously and research a vehicle’s status. Given the amount of time and effort it took just to find out that the car was stolen, it’s surprising that anyone was ever caught.

Vehicle security extends far beyond what’s inside the vehicle.

Invest in a motorcycle helmet lock made of high-quality, durable materials

The relay device is able to wirelessly capture the key fob’s signal and trick the Tesla into thinking the thieves have the keys.