Can is not the same thing as should. 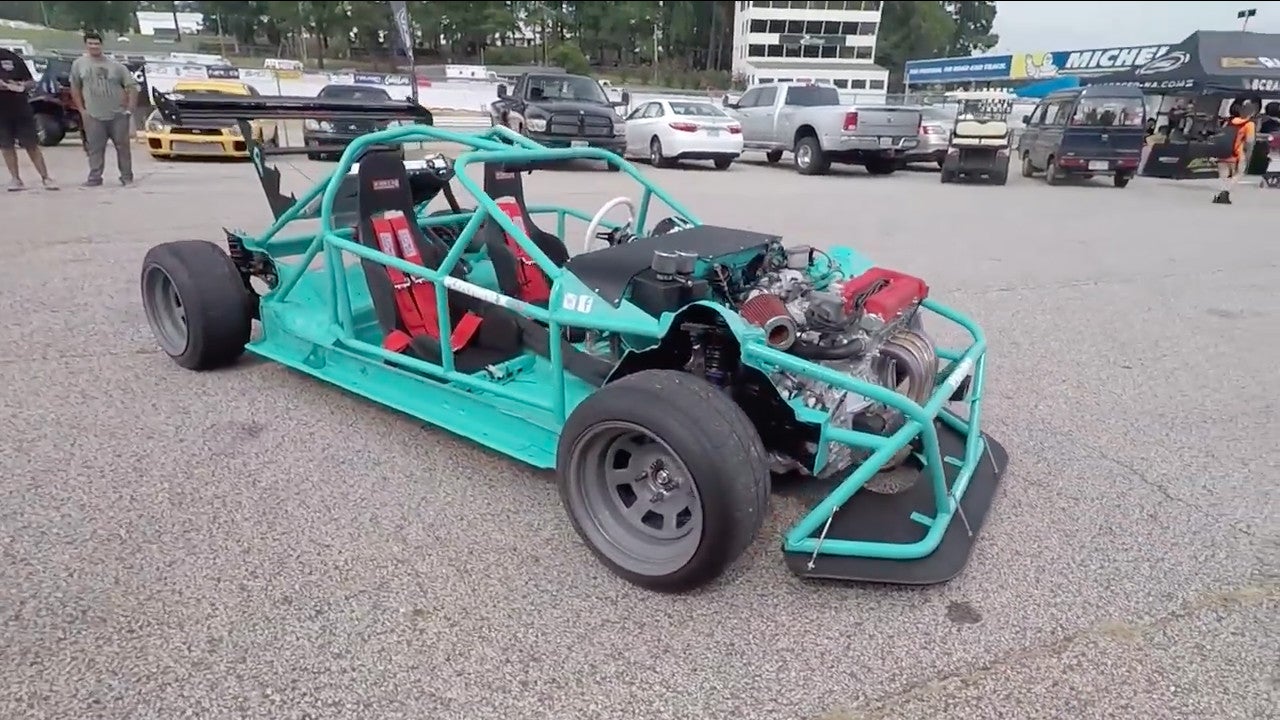 Starting with the Ariel Atom, the exoskeleton-styled weekend toy market has grown to include the Mazda Miata-based Exocet, and the Ariel Nomad. Following in this trend, Alabama-based Honda performance shop Krowrx (who built a similarly skeletal BMW) has built a similar vehicle, based on an Acura Integra. The Integra was stripped down to just its tub, drivetrain, and controls, before having a cage welded in over top, smaller, wider wheels fitted at each corner, bucket seats bolted in, and aero kit added front and back. Driven by Matt Farah, current host of /Drive on NBC Sports, on the magnificent Road Atlanta race track, it revealed itself to be... kind of bad.

It has been known to racers of the world for decades that less weight is better—just ask Colin "simplify and add lightness" Chapman of Lotus, or Gordon Murray, designer of the McLaren F1 and MP4/4.

In the pursuit of being lightweight, however, this X-Tegra loses two key elements important in a modern race car or track toy: Aerodynamic downforce, and structural rigidity. According to a comment on the driving experience left by Matt on Reddit, the front end started to get light at around 70 miles per hour, presumably due to the air rushing through what used to be an enclosed engine compartment, and into the firewall, where it has nowhere to go but down. Having a splitter up front to add frontal downforce isn't of much use when there is something that counteracts it immediately to its rear.

To add to the lack of faith in the car, the cage itself looks pretty, but poor design means it probably would have next to no strength in the event of a rollover or crash. Why? Long story short, look at the shapes used in the cage: It is almost entirely composed of flimsy squares and rectangles. There is next to no triangulation, a technique in engineering that breaks down large frames into repeating triangles, which have greater load bearing capabilities than quadrangle-based structures.

No comments are made on the subject, but we imagine the weight distribution to be nothing short of a nightmare, as the B18 engine that powers the X-Tegra weighs close to 400 pounds on its own, and at a weight below 1,300 pounds, that means that this car likely far in excess of 60 percent of its weight on the front wheels.

Other grievances, which include the car's habit of spitting debris into the driver's face, are not nearly as important as the fact that the car is both slow and unsafe. A full face helmet would negate the former problem, but not the latter.

If these problems are not enough to convince you not to turn your '90s econobox into a half-baked Ariel imitator, just skip ahead to 9:05, when Matt is forced to let a Nissan Juke tailing him play through. A Juke. If that doesn't bother you, do as you wish, but don't expect the result to be anything other than painfully slow, and maybe, painfully dangerous too.

That’s why they make filters, folks.