Amazon's 30-Cent Gas Stunt for The Marvelous Mrs. Maisel Was So Popular Police Shut It Down 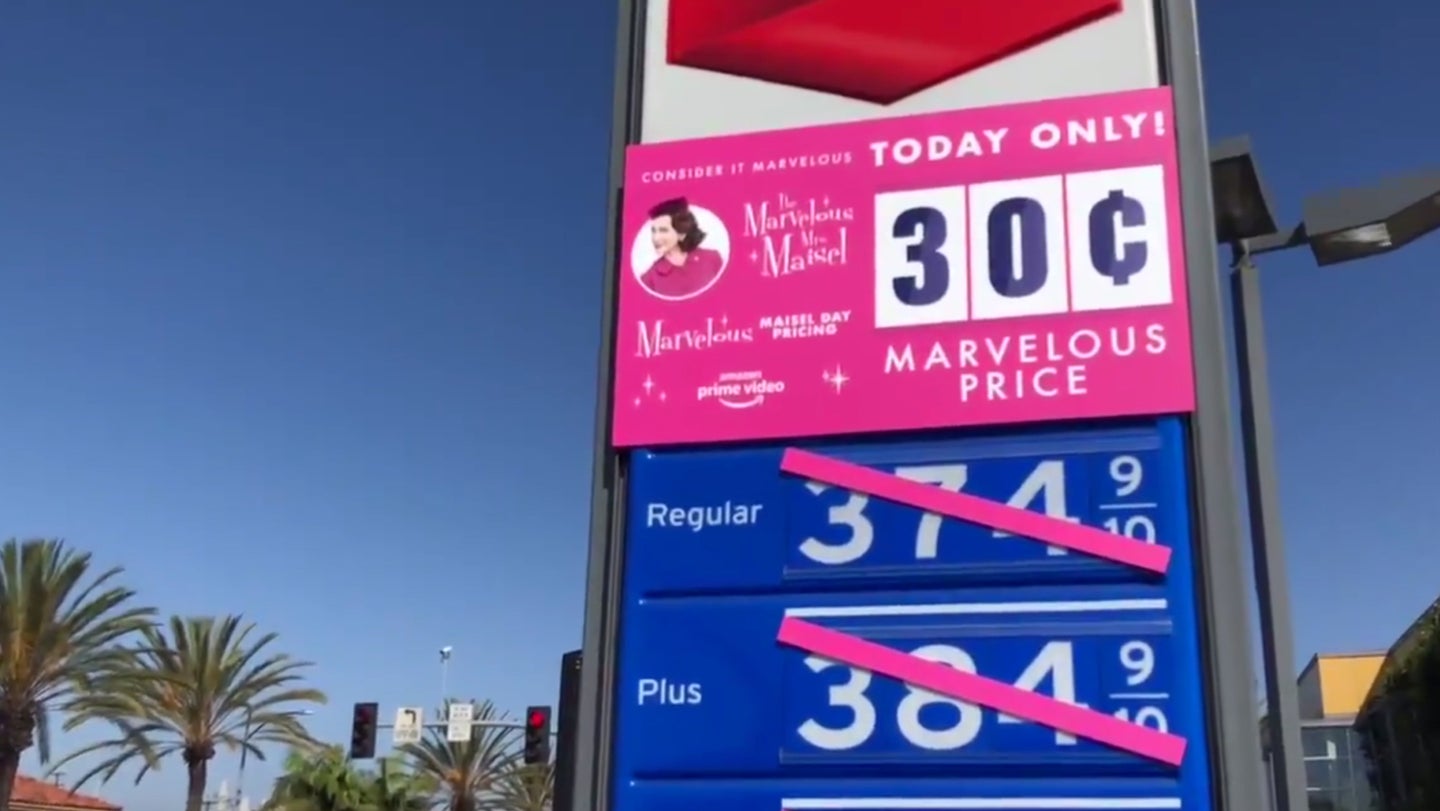 Few things are more appealing to drivers than cheap gas, especially in a place where fuel prices are notoriously high. So, when Amazon teamed up with a Chevron in Santa Monica, California, to offer up to 20 gallons of gas at 30 cents per gallon, it got so clogged that Santa Monica police had to shut the promotion down early.

The "marvelous" 30-cents-per-gallon price was a throwback to fifties-era pricing to promote Amazon's The Marvelous Mrs. Maisel show ahead of the Emmys, where it is nominated for 20 awards this year. It was part of a "Maisel Day" string of low promotional prices straight out of the show's era across the Los Angeles area, as the AV Club notes. This included such deals as 30-cent malts, $2.50 makeovers and $40 rooms, plus ‘50s-themed decor in certain locations.

The Chevron's normal prices started at $3.74 per gallon for regular gas, but those prices were crossed out with pink lines during the Mrs. Maisel promotion. Prices averaged over $4 per gallon earlier this year across California a few months ago for the first time since 2015, and currently average about $3.58 per gallon, according to Buzzfeed.

Amazon's cheap gas promotion ground traffic to a halt on Cloverfield Avenue and Interstate 10 for several hours Thursday, the Los Angeles Times reports. That's when the Santa Monica Police Department decided to call the promotion ahead of its scheduled 5 p.m. end time.

"It was supposed to be shut down at 1:30 p.m. and we decided to let it go an extra hour to 2:30," SMPD spokeswoman Lt. Candice Cobarrubias told the Los Angeles Times.

While that is a bit of a killjoy, it's also somewhat understandable for a region infamous for garbage traffic. If the 30-cent gas promo was bad enough to block the freeway in the middle of the day, letting it run through the start of rush hour seemed particularly unwise.

Complaints about the traffic caused by Amazon's cheap gas promo reportedly started coming in to the SMPD shortly after the cheap prices went into affect at around 9 a.m. Officers were on hand to direct traffic at the scene that morning, and only closed the promotion after traffic wasn't moving on Cloverfield Avenue, citing fire concerns.

"When we got out there and realized how big of a traffic issue it was, the sergeant on scene let the promoter know that we had to keep the flow of traffic on Cloverfield. When it got to the point that no one on Cloverfield was moving, we had to flush traffic," Cobarrubias explained to the Los Angeles Times.

Only one minor two-car collision happened in the area earlier in the day, per the California Highway Patrol. The CHP reported no injuries to the L.A. Times.

Perhaps the biggest problem was that only this one Chevron was in on the 30-cent gas deal. Surely Amazon, of all companies, could've afforded to run this promotion at several stations across the L.A. area, and thus, spread some of the chaos around.

Amazon acknowledged the over-popularity of its stunt on Twitter, claiming that it didn't expect to bring "Manhattan traffic" with them.