It can carry up to 250 passengers and travel up to 186 miles on a single charge. 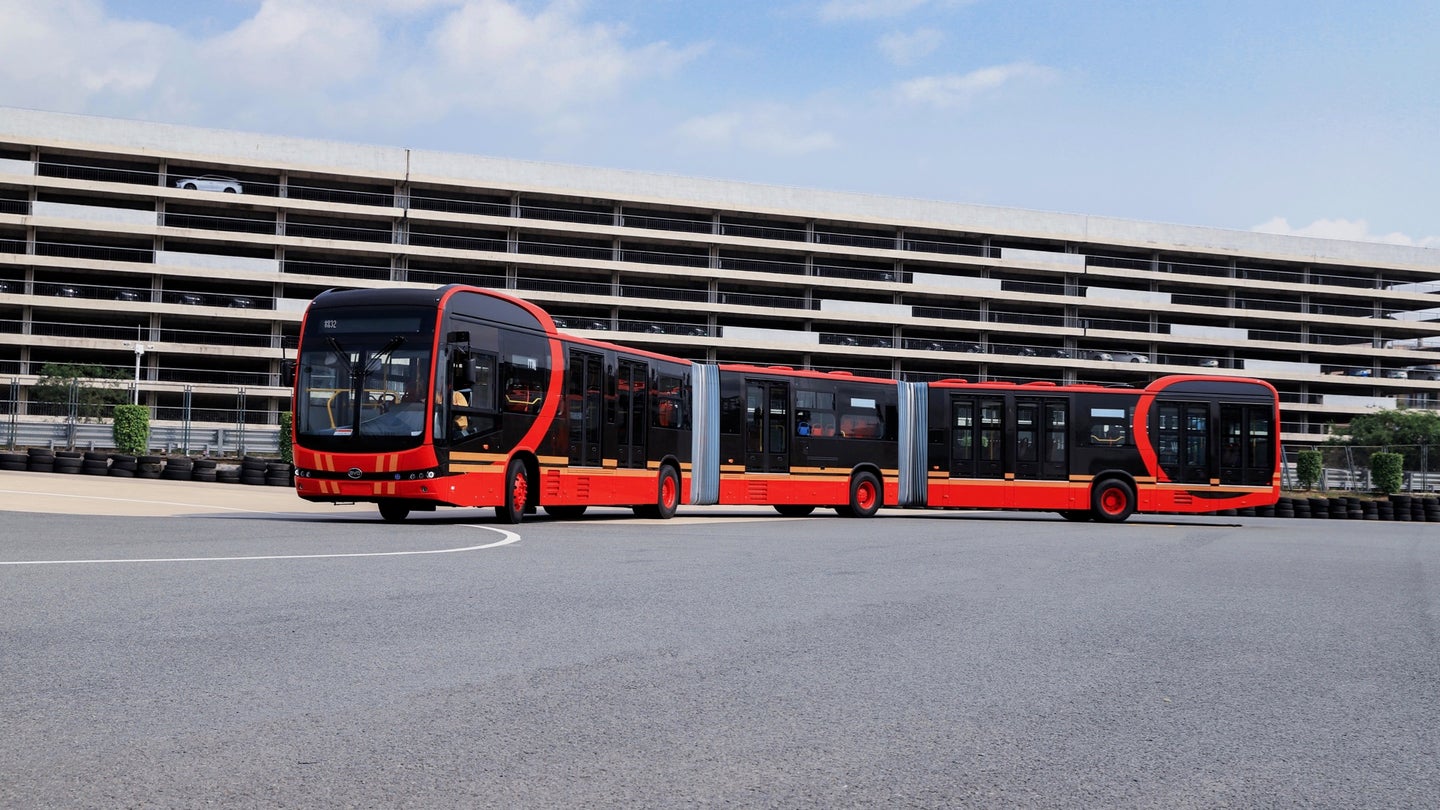 China's BYD claims to have built the world's longest electric bus. It's called the K12A, it stretches 88 feet long and requires accordion-hinged articulated sections in order to negotiate corners. It can carry up to 250 passengers, has a top speed of 40 miles per hour, and can travel up to 186 miles per single full charge, according to BYD.

The massive vehicle was built for Colombia's TransMilenio bus rapid transit system. Bus rapid transit places buses on dedicated rights of way, allowing them to avoid traffic and attain higher average speed. It's supposed to offer many of the advantages of traditional rail rapid-transit systems, such as subways or light rail, but at a comparatively lower cost.

In addition to making buses, BYD (short for "Build Your Dreams") is one of China's largest automakers. The company has failed so far to crack the United States market with its passenger cars, but it has sold electric buses Stateside. BYD has a factory north of Los Angeles, California which has built buses for a handful of U.S. transit agencies, as well as Stanford University and Facebook, according to the company.

That being said, BYD isn't the only company selling electric buses. In North America, it faces competition from New Flyer Industries and Proterra, which is partnering with Daimler's commercial vehicle division to grow its business. Volvo has tested electric buses in its home country of Sweden and recently exported two prototypes with autonomous-driving capabilities to Singapore. This increased interest in electric buses could lead to a major reduction in emissions.

According to the Union of Concerned Scientists (UCS), an electric bus will have lower overall carbon emissions than a diesel bus, regardless of where the electricity to charge it comes from. Those emissions will be reduced further as the electricity grid transitions from fossil fuels to renewable energy. While heavy-duty vehicles like buses only make up 5 percent of vehicles on U.S. roads, they account for 25 percent of transportation-related emissions, according to the UCS.

More electric buses are needed to have a real impact on emissions. Most U.S. buses still run on diesel, but that could change, as Los Angeles is aiming for an all-electric bus fleet by 2030, while New York City is testing electric buses for possible future public transit use.

Kumamoto University is bringing together auto manufacturers, government, and academia to electrify buses.