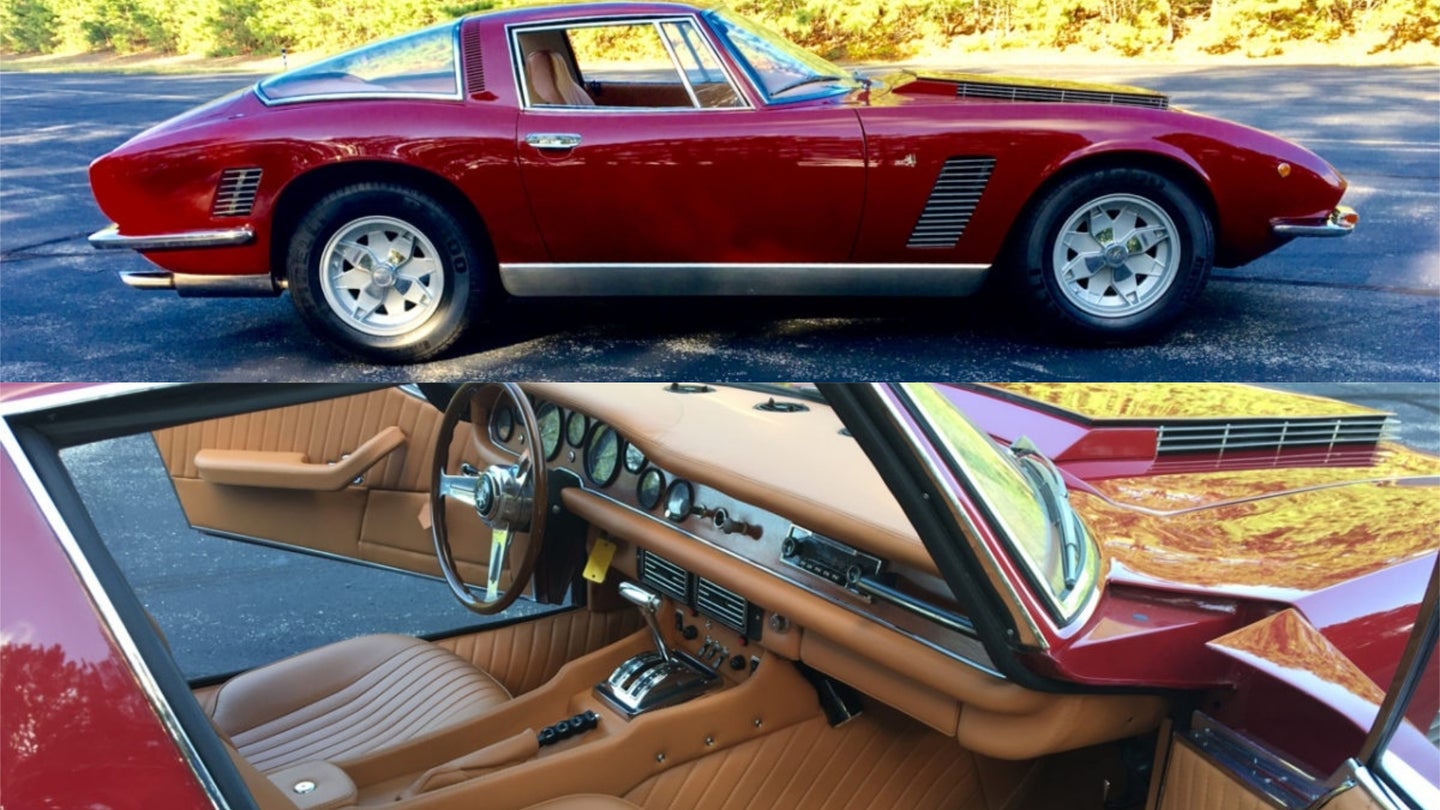 Iso was created by industrialist Renzo Rivolta, who made his fortune manufacturing refrigerators. Based in a suburb of Milan, Italy, the company manufactured scooters and the iconic Isetta three-wheeled bubble car that provided cash-strapped Europeans with transportation in the aftermath of World War II. BMW purchased the rights and tooling to the Isetta in 1954 and sold more than 160,000 of them through 1962.

The Giorgetto Giugiaro-designed Grifo is decidedly rarer than that; only 412 (some say 413) were produced between 1965 and 1974. The Grifo featured open headlights and Corvette engines for most of its run, but later models, like the one featured here, had semi-covered lights and Ford powerplants. The 351-cubic-inch Cleveland V8 puts out 350 horsepower in this Grifo, allowing for an impressive 160-mile-per-hour top speed. Some earlier Isos featuring giant 7.0-liter Chevy engines could approach 186 mph, which was almost unheard of at the time.

Decades-old Italian supercars aren't known for ease of maintenance, but basic upkeep on the Iso shouldn't be too bad, thanks to its stout muscle car heart. These were well-built and well-finished cars with strong steel frames, four-wheel disc brakes, and all-independent suspensions. Dependability, paired with a luxurious interior and large trunk made them reasonably practical for daily use. The Grifo even featured a vestigial back seat over its rear storage area suitable for the fancy pedigreed dogs of the upper class, or two of their lesser-loved children.

Finished in red with a light brown interior done in rich leather, this particular Grifo appears as-new. Its pronounced hood scoop features fine metal slats along the front and sides to let in air. The car is from the collection of designer and film producer Stuart Parr and is listed at $475,000 on the Classic Driver auction site. The seller notes the car has a new interior with Wilton carpeting, factory air conditioning, and power steering. The odometer shows 43,500 kilometers (27,029 miles).

Now, $475,000 may seem like a lot to ask, but not when you consider the stratospheric pricing achieved by contemporary competitors such as the Ferrari Daytona, of which more than 1,400 were sold. At press time, Hemmings had two Ferrari Daytonas listed for $675,000 each—a 42 percent price premium for a more "common" car.

See? The Grifo is practically a bargain.