Behind-the-scenes at Magnum Automotive, where the Chevy V8 for our Toyota FJ project is coming together nicely. 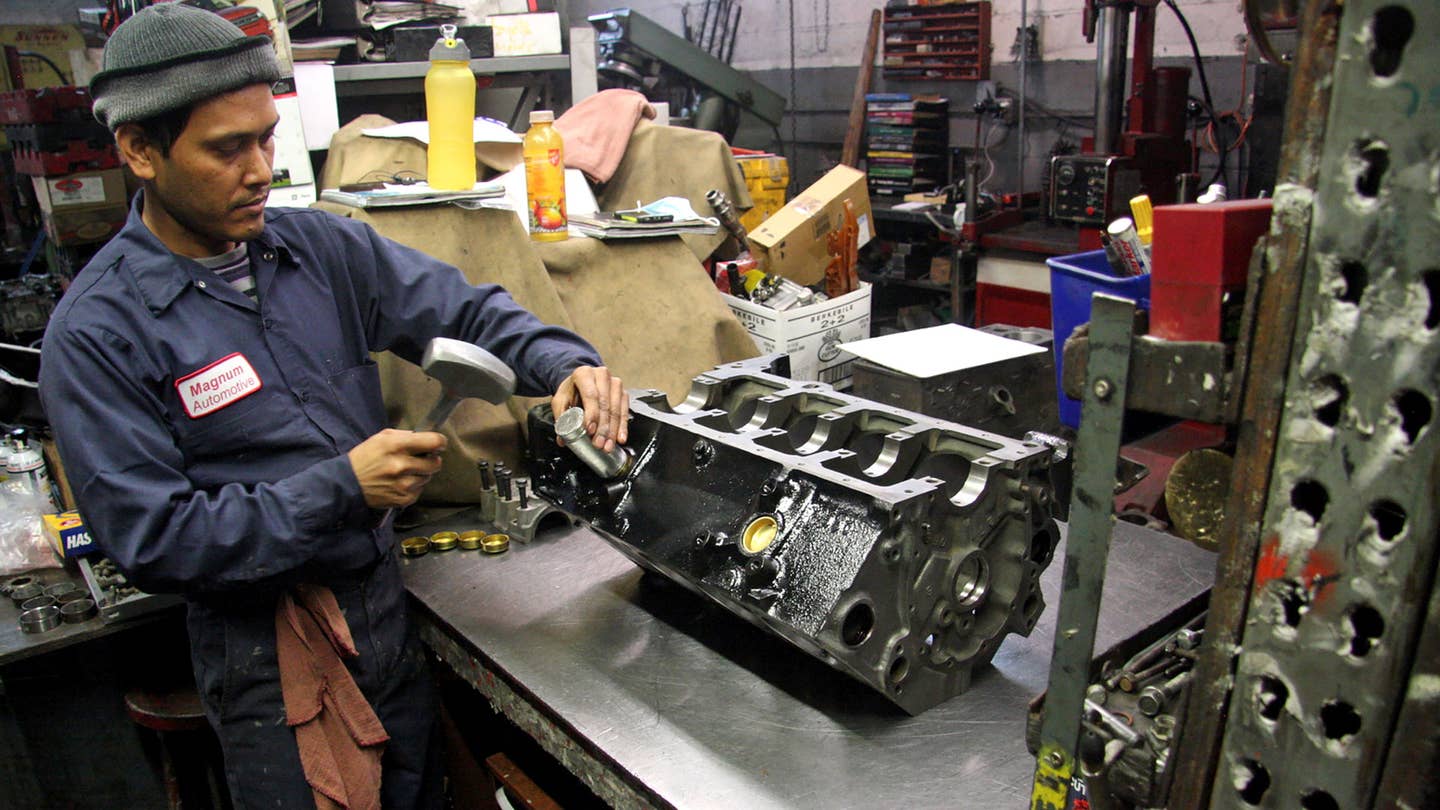 In the life of every gearhead, there comes a time when it's necessary to visit the machine shop. For most of us, it’s is a mysterious place. The machinists within solemnly and dutifully accept our battered engine parts, perform a few miracles on them on with big machines in some nebulous back room, and return them to you as a sparkling new engine.

When you pop in to see how the work is going, all that can be heard from the front office are vague whirring and hissing sounds. You think: What goes on back there? Craning for a peak as the door into the magic cave swings open, you breathe a sigh of disappointment as it swings shut again.

"Pay no attention to that man behind the curtain!" a voice seems to say.

Wait, did I just hear that? Couldn't be. Must be in my head. But conjured voices are no surprise. For those of us interested in how internal combustion engines work, the machine shop is a real, live fantasy world.

Lucky for us, Maurice Albanese—proprietor of Magnum Automotive, the machine shop in Queens where we're getting all of the engine work done for our Toyota Land Cruiser project—allowed me to spend a day in his shop observing the process. I got a chance to see engine blocks being bored out for larger cylinders; I saw our own block’s re-bored cylinders being honed (giving the cylinder walls the right surface); and I watched while the Chevy 350 we'll put into the Toyota was assembled.

I'm sure there are all sorts of machine shops out there. Maurice's certainly has its own character. The portal into that mystical land is a greasy door that swings back and forth with every draft that passes through the old building. Passing through it, you enter a dark forest of old engine blocks, a thick understory of cylinder heads and crankshafts in full bloom at your feet.

Down one path through the forest, there’s a big, steam-belching machine that cleans blocks, heads and other parts. In a few minutes, it does the work that hours of scrubbing with a wire brush and a bottle of Simple Green could never accomplish. Beholding the once-greasy-now-pristine parts that emerged from it, I instantly felt foolish for all the hours of my life I'd wasted with tedious scrubbing.

Another winding lane through parts old and new leads to a brightly lit area where cylinder heads are refinished. Next to it, the huge machine used to refinish cylinder bores. A little farther down is the honing machine. A row of engine blocks waiting to be refinished separates these machines from the assembly table, where I watched Nayon, who said he had been working in machine shops for most of his life, assemble our engine with the deft skill you’d expect from someone who had been doing it for so long.

Along little side trails in the parts maze, partially assembled engines waited for the final touches. In one corner, a rebuilt Ford 200ci inline-six from a Sixties Falcon, painted a factory-correct shade of blue. In another, the boxer four-cylinder from a Subaru. A 1946 Continental diesel engine—a four-cylinder—sat in another corner, wrapped in plastic and ready for customer pickup. There were Honda engines everywhere I looked.

The rest of the shop was stacked to the rafters with parts and tools. At first glance, it looked like an industrial version of The Burrow, the Weasley’s home from Harry Potter. Which is to say, a bit cluttered. But there was no disorder or confusion among its human inhabitants. Maurice’s employees glided back and forth between machines, completing various tasks as they shouted brief instructions at one another and cracked jokes in Spanish.

If the work seemed a bit tedious, it was only because they had to wait for the machines to do their thing. Every moment a machine wasn’t humming, someone was taking minute measurements with precision tools to make sure everything was perfect. Alberto, the man at the honing and boring machines, said there’s absolutely no room for error. Every measurement has to be spot on, or it could lead to engine problems later.

Magnum is a slice of Old World. There are no ones and zeroes flowing through it, only men breathing and machines hissing. Customers don’t send emails, they show up in person or call. Maurice always answers the phone, sometime holding calls on his flip phone to talk with someone on the landline.

“Jeez, this place is a mess,” he said, a Bill Murray-style expression of deadpan amusement etched on his face as he surveyed the block forest. “You really wanna take pictures of this?”

Occasionally, a cat popped out from a space on one of the shelves left vacant by a part that had been removed. He meowed his greeting. Thackery Binx, as I later found out he’s called, is in charge of rodent control. He also seemed to be a de facto dust mop, the white parts of his fur stained the same color gray as many of the old engines.

When Nayon finished assembling our engine, it was—like all the other fresh engines I saw waiting for pick-up—beautiful, perfect. How is it possible for an engine to be so lovely? Because I saw the level of care put into making sure everything about it was just right. A machine shop is no factory, where everything coming out of it is the same size and shape. The machines that come out of this place are more like people—different in every way.

“You know, in the end none of this matters,” Maurice said as he heated a connecting rod over a butane flame. He paused to show me some pictures of the wine-making setup he’d built in the garage of his home, also in Queens. Then, grinning, he said, “All that really matters is good wine.”

So what's left for us? Stay tuned as we take you through the assembly process on the Build. Then, later on, we'll show you how to install a bunch of cool performance parts that’ll turn our FJ62 Toyota Land Cruiser from the rusty fart-sound machine it was into a NASCAR-roaring urban offroader.

For now, though, I think we’ll enjoy a few glasses of wine.

Toyota Has Been Developing a New Twin-Turbo V8, According to These Patents

Yes, we mean an AWD Challenger and a modified McLaren 570GT.