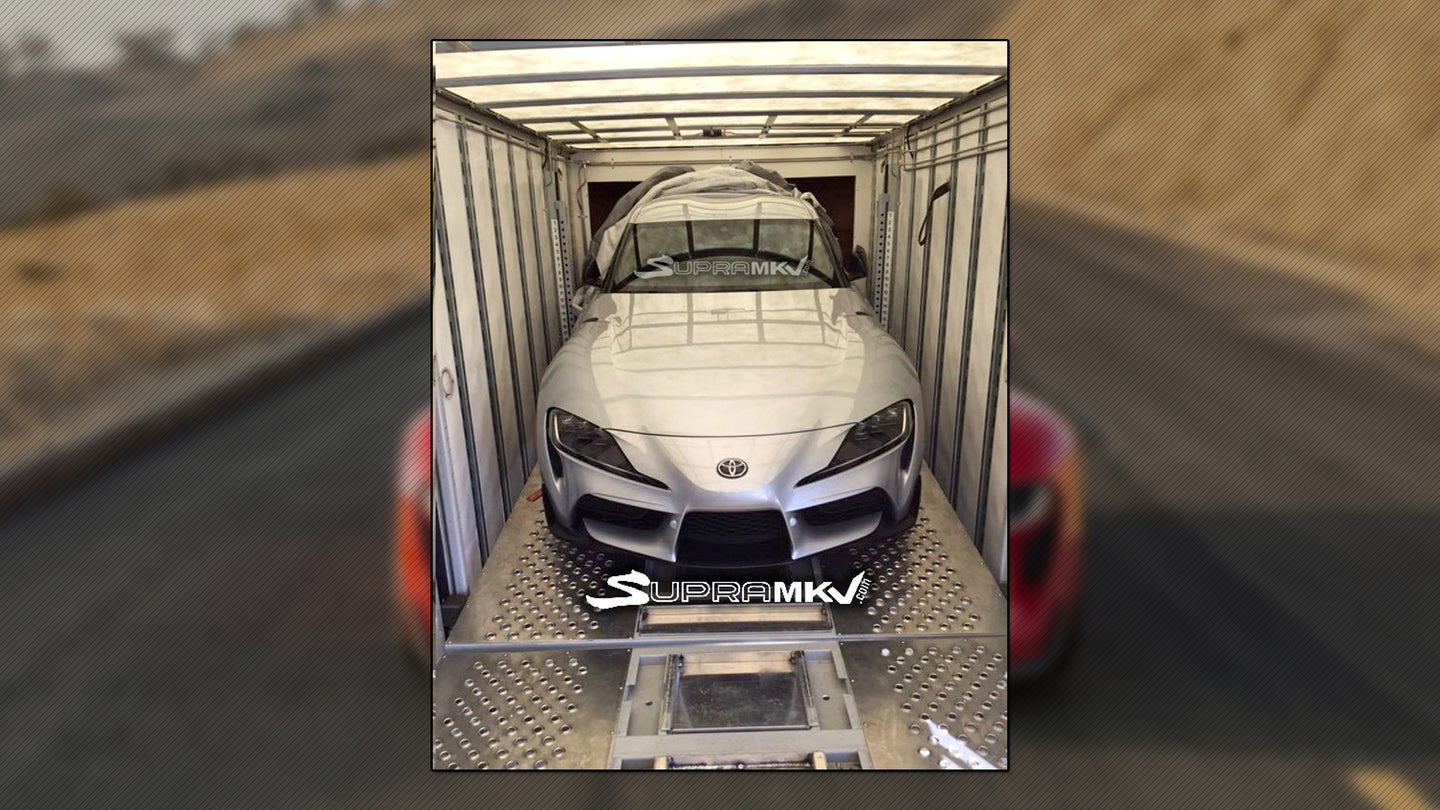 The long-awaited successor of the Toyota Supra has been heavily teased online for quite some time, being shown in every garb

except for the one that consumers will be able to buy when the car officially launches.

Exactly a month ahead of the Supra's expected reveal at the 2019 Detroit Auto Show, an image showing what appears to be a production version of the fifth-generation Supra has popped up on the SupraMKV forums, revealing the uncovered front-end way ahead of schedule.

We've seen the Supra clad in camouflage a few times, but this time it's different. The leaked photo shows a production-ready Supra resting in a car transport trailer, a cover peeled from its roof to reveal the automobile inside. The fresh look on the car helps to smooth out some visual obscurities previously hidden by flashy colors and graphics, as well as actualize the depth and form of the car's body panels.

When compared to Toyota's FT-1 concept car, front end styling remains fairly similar to its initial design, albeit a few changes in the name of modesty. Most notable is nose job that Toyota gave to road-going Supra, flattening the concept's pointy fascia and replacing it with an aerodynamic tunnel. The design and width of the other bumper cut-outs have also changed to be slightly less futuristic, and the lower valance tweaked to match the new styling.

Headlight design stays fairly true to the concept as well; the angle of the photo giving a reminiscence to its predecessor's unnaturally large housings. The once-curvaceous arches in the front also appear to have been watered down, transitioned into more of a flowing style that fourth-generation Supra fans may subtly recognize.

As for what remains from the concept, we can immediately point out the double-bubble roof, retro-modern side mirrors, and black A-pillars which help to give the car a dual-tonal appearance.

Toyota is expected to outfit the flagship trim of its upcoming Supra with a 3.0-liter inline-six that pumps out 335 ponies. A more economical version of the sports car is anticipated to feature a 261 horsepower 2.0-liter turbocharged four-cylinder.

Gearbox options are still a mystery. Engineers were still undecided on if the Supra would be given a manual transmission back in September, however, its co-developed BMW counterpart is likely to be offered in automatic only. Late last month, Klaus Frohlich, BMW's development chief, said that the automaker had no plans to develop a successor to the manual gearbox used in the 3 Series today.

We're not sure where the forum obtained the photo of the Supra, or who had access to the vehicle in a transport trailer, however, the timing of the leak is suspiciously close (exactly one month) from its official unveiling. Perhaps this is a company-endorsed teaser to keep the Supra hype in full force.