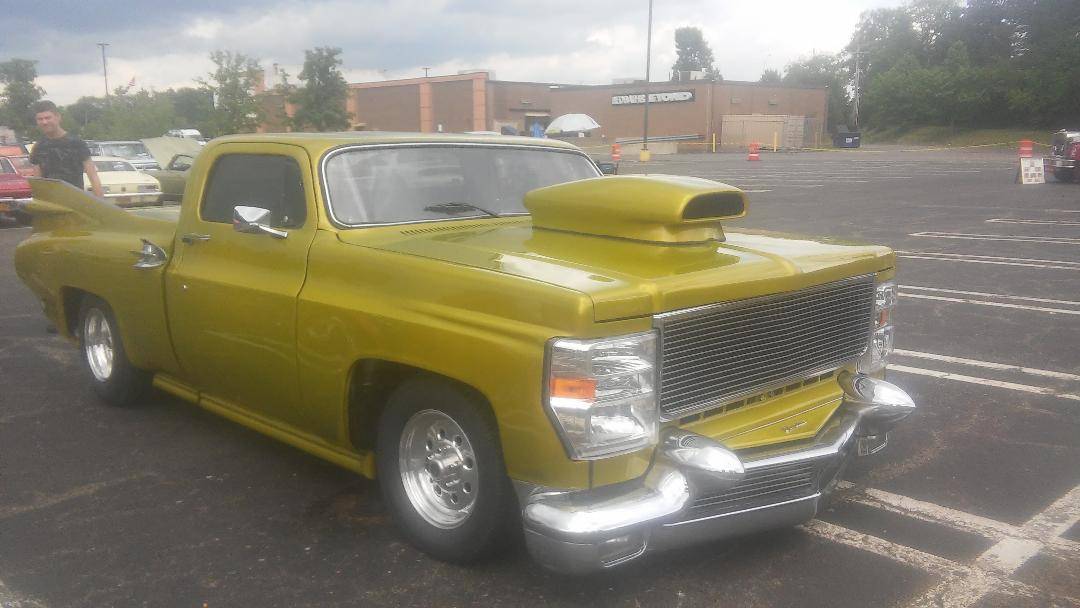 There are things we're told to do for our own good by our parents, like looking both ways before crossing the street. The same goes for things we're told not to do, like sticking forks into electrical outlets. Then there are things we aren't even warned against because they go beyond natural curiosity and into the realm of cruelty, such as putting the front end of a Ford F-series onto a Chevrolet C10.

Unfortunately, dear America, it's time we start teaching our children not to do that, because someone has.

Your eyes gaze upon a 1975 Chevrolet C10, reborn with a style of extreme, borderline-satirical retro Americana known to some simply as winga-dinga. Its owner and seller refers to it as "the One and Only (fact), 'FRANKY," perhaps referring to Frankenstein's monster.

This C10 has a 1956 Cadillac front bumper and 2011 Ford F-series pickup headlights grafted to its face and on its overwrought ram-air intake hood sits a 1956 Ford hood ornament. After the cab is a rear half largely from a 1959 Cadillac, and while we're pleased to see fins are coming back, putting this rear end on a C10 is like dressing your landlord in your grandmother's clothes.

Its bright, mustard-yellow paint comes from (and should have stayed on) BMW motorcycles. Fortunately, while the hood may posit the truck as a high-performance vehicle that its performance could never match, it won't embarrass itself in a race, as it does have a 5.7-liter Chevy V8 linked to a Turbo-Hydramatic 350 automatic transmission. Race winner? Probably not, but car show winner? If the trophies in the photos are any thing to go by, then yes.

Michael Chadwick Fry was involved in a fatal police shooting in 2012 and believes police are trying to kill him.