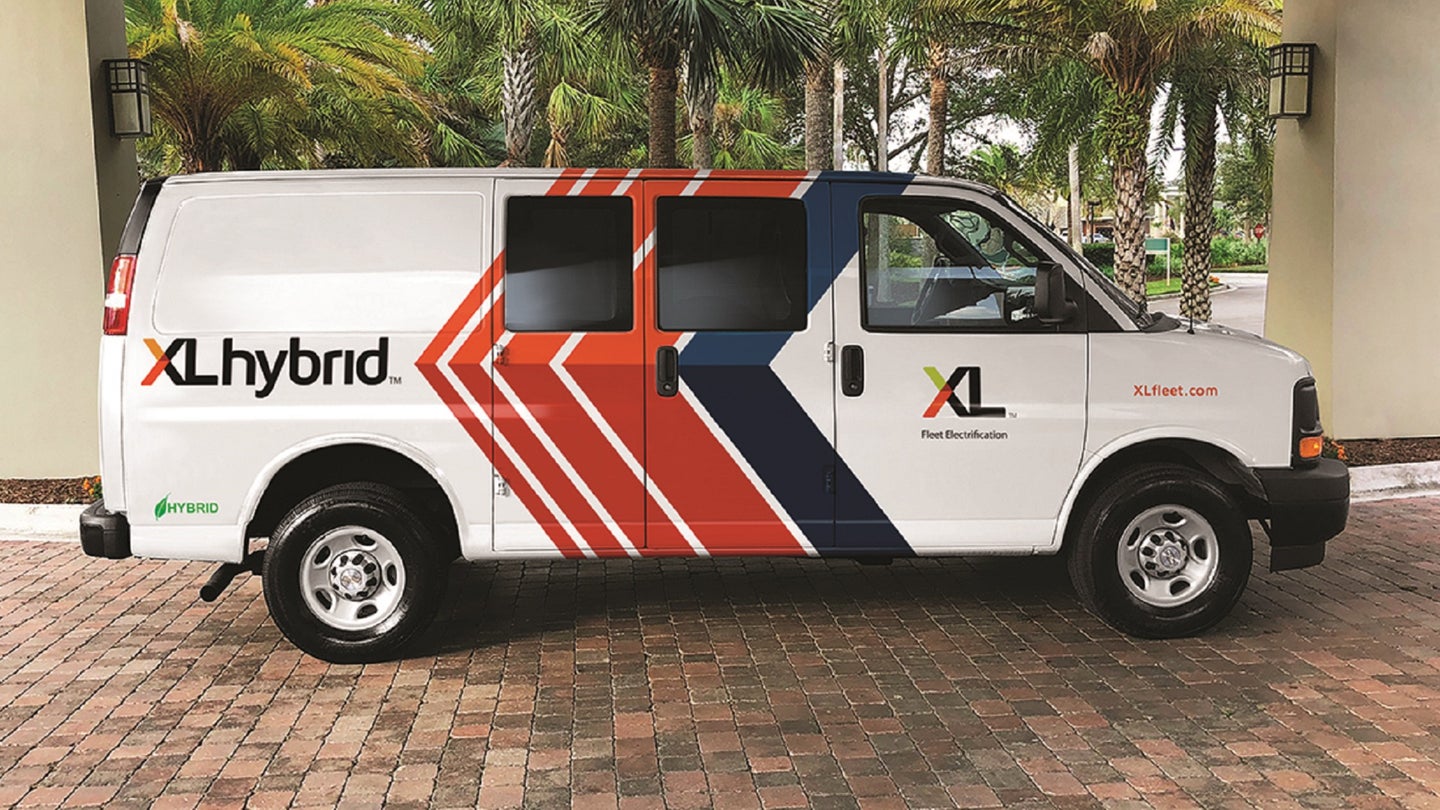 When most people think of a hybrid, they think of a Toyota Prius. When they think of a plug-in hybrid they think of a Honda Clarity, or maybe a Ford Fusion Energi. They certainly don't think of a Chevy Express, Ford Transit, or an Isuzu step van, because they're not built in hybrid versions. Massachusetts-based company XL is offering a unique twist on the standard hybrid formula for large commercial vehicles that aren't available with a hybrid system from the factory.

The consumer hybrid market is filled, Tod Hynes CEO of XL told The Drive. But the commercial market is wide open. Only now is Ford introducing a hybrid version of the F-150 pickup. Other trucks and vans have not yet seen the benefit of hybrid technology from the factory. Additionally, many such vehicles are used for inefficient stop-and-go urban driving. This is where the old-fashioned large V6 and V8 engines perform worst. But it's also what electric vehicles excel at, both in performance and fuel economy.

The XLH hybrid electric system is available for a wide variety of Ford, GM, and Isuzu trucks and vans. It replaces the factory driveshaft with an electric motor that attaches to the transmission, as well as a shorter driveshaft. Add batteries, a cooling system, wiring, and an electronic control unit, and the hybrid system provides an electric assist to the vehicle's existing gas or diesel engine, as well as regenerative braking to recharge the battery.

Honda's Integrated Motor Assist system introduced on the original Insight, which added an electric motor to an existing internal combustion drivetrain rather than Toyota's method of using the gas engine to keep an all-electric drivetrain charged is similar. XL also offers the XLP plug-in hybrid option for the Ford F-150, with similar systems for other trucks and vans currently in development.

The exact fuel economy improvement depends on many factors, such as the specific vehicle, the type of driving it is used for, and even particular driving styles. But generally speaking, XL claims that the XLH hybrid system can improve on a vehicle's EPA city estimate by about 25 percent.

Vehicles used exclusively in high-traffic city environments will see more improvement than those that do long highway hauls, where the advantages of electric drive are not as great. XL will work with companies to perform a fleet analysis to determine their needs and has no problem electrifying only part of the fleet if that's what makes the most sense in a certain situation. XL has worked together with Ford, GM, and Isuzu in designing these packages.

The original vehicle manufacturers are confident enough in the XL systems to honor the factory warranty even on vehicles using the XLH or XLP systems. If the original engine or transmission fail under warranty, they will still be covered despite the addition of the hybrid system.

Additionally, although XL's system is quite reliable, in a worst-case scenario where it fails completely the driver is left with an ordinary gas or diesel vehicle with no electric assist. Even a catastrophic failure in the XL hybrid system will not disable the vehicle. Plus the XL Link cloud-based analytics platform is available to help engineers diagnose and troubleshoot faulty hybrid modules remotely.

These factors no doubt put fleet managers' minds at ease when considering downtime and the costs of repair. Coca-Cola, PepsiCo, and FedEx are among the larger customers using XL's hybrid system. Many transportation, municipal, and utility fleets are also among XL's customers.

The strong demand from utility customers for an F-150 plug-in hybrid led to the F-150 becoming the first vehicle to receive such a system, which XL has wanted to produce since its inception in 2009. Until recently, high battery prices forced XL to look toward a more traditional hybrid system, but now that prices have come down the plug-in hybrid system is financially feasible.

Eventually, auto manufacturers may follow the lead of the Ford F-150 and introduce more economical electrified versions of their larger commercial vehicles. But until that happens, XL is ready to provide that solution today.