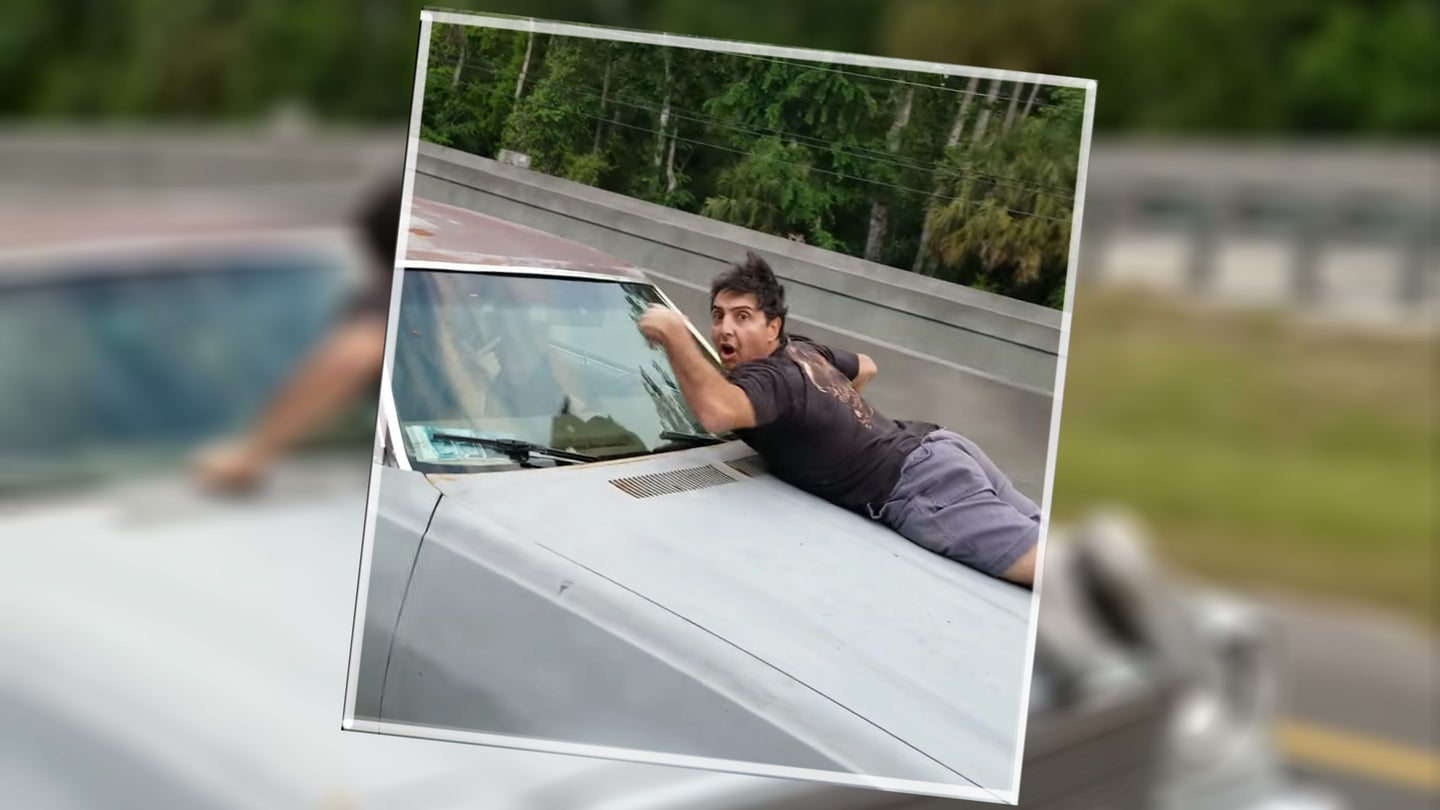 Hello, everyone, and welcome to another installment of the ever-expanding, always-entertaining saga known as: The Florida Man Files. In today's edition, we bring you to what is allegedly the highways of St. Augustine on the state's northeast coast, where a pickup truck driver recently spotted a man clinging to the hood of a Chevrolet Chevelle as the person behind the wheel drove on down the road.

The video—annoyingly filed in portrait mode, but otherwise captured in impeccable high-definition quality—shows the battered third-gen Chevelle with Colorado plates passing the camera at a speed that seems slow for the highway, but awfully rapid by the standards of a man in a T-shirt and shorts who could tumble onto the pavement at any second. (Based on the brief, unfocused shot of the truck's speedometer at the end, our crack team of video analysts here at The Drive estimate the Chevy is doing about 30 miles per hour.)

"Call the cops!" the hood rider screams to the person filming, before repeatedly yelling a phrase that's somewhat lost in the wind, but sounds an awful lot like, "That bitch stole my car!" And then, just as quickly as he came into our lives, Florida Man is gone again, as the Chevelle pulls ahead of the truck and the video ends. It's 37 seconds of pure viral video perfection—which, no doubt, explains how it's already been scooped up by the likes of video distributor ViralHog and internet content regurgitator Digg.

The video is just the latest in Florida's long, proud history of stupid people doing stupid things in proximity to automobiles; witness such examples as the Florida Man who allegedly went on a cocaine-fueled 100-mph blast in a Corvette, the Florida Man who apparently thought a Bank of America drive-thru was a Taco Bell, the Florida Man who tried to get out of a speeding ticket by telling the cops he was racing to have sex, and the Florida Man who thought (erroneously) he could jump his Toyota Corolla over a canal. And that's just since last August. Most babies conceived on the day of that Corvette driver's arrest haven't been born yet.

(Want more proof of the Sunshine State's insanity? A quick search of YouTube sorted by date reveals the subject of this post isn't even the only video of a Florida Man clinging to a hood of a moving car to hit the web in the past week.)

So here's to you, Florida Man. May your poor judgement continue to educate and amuse the rest of us for years to come.