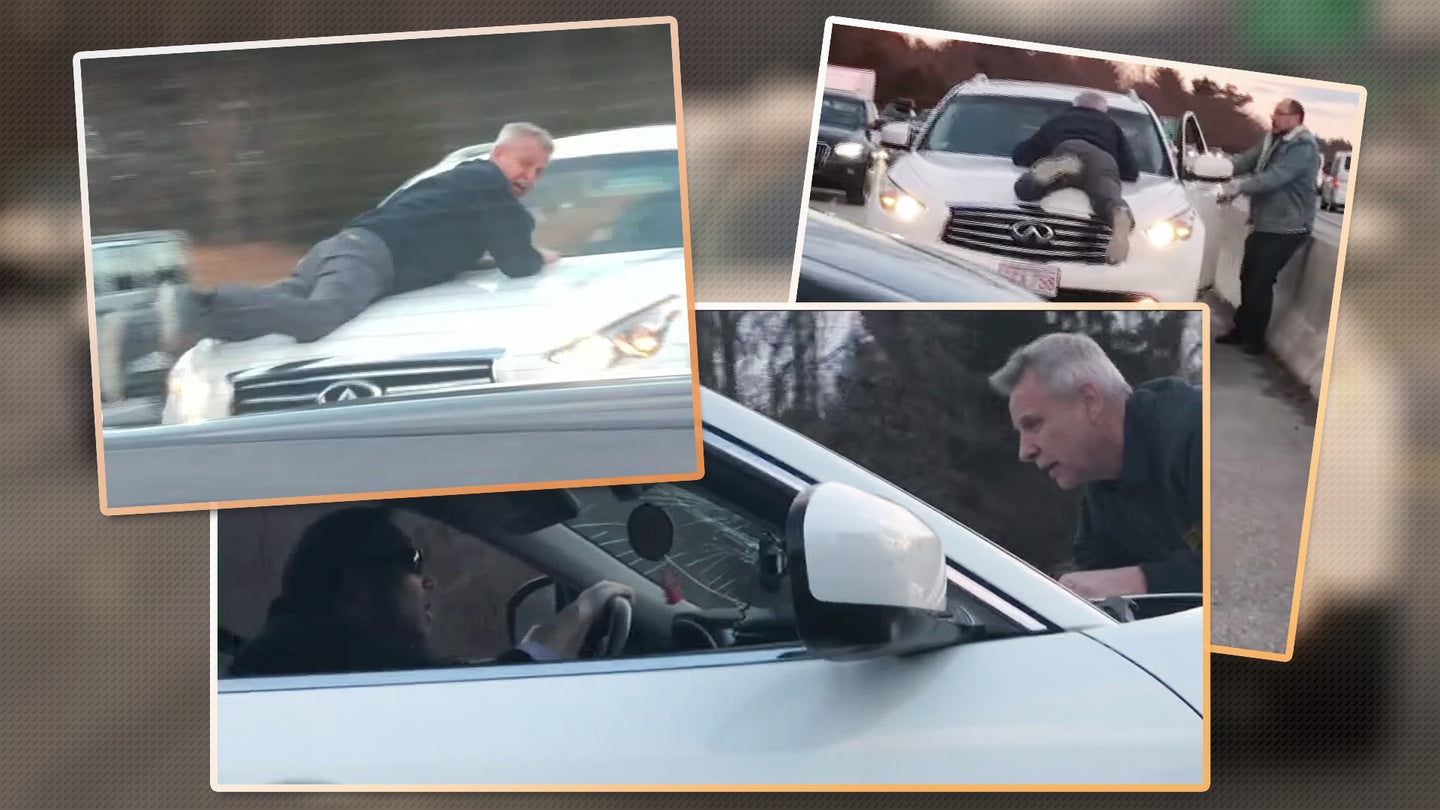 In a vibrant portrait of the all-American pastime of road rage, a Massachusetts man has been charged with assault after fleeing a confrontation with the other driver clinging to the hood of his car, reaching speeds of 70 mph on the highway before being boxed in by traffic and stopped by a gun-wielding Good Samaritan—all while shocked commuters caught the whole thing on camera.

According to CBS Boston, the dramatic scene unfolded during rush hour on Friday afternoon on the Mass Pike in the town of Weston. The Mass Pike doubles as the tail end of the nation-spanning I-90; it's also the main east-west artery in the state and sees heavy traffic daily. All this to say it's an unsurprising place for something like this to go down, and that's before you factor in Massachusetts drivers' less-than-stellar reputation.

Police say 37-year-old Mark Fitzgerald and 65-year-old Richard Kamrowski were both driving west around 4:30 pm when they were involved in a "minor, side-swipe collision." Kamrowski reportedly stopped in the left lane—a big no-no for safety and traffic reasons—and got out to talk to Fitzgerald, who was still in the driver's seat of his Infiniti QX70.

Things quickly got heated; Fitzgerald's lawyer claims the older man was being aggressive, while Kamrowski told reporters he thought Fitzgerald was going to flee. In any case, the report says Kamrowski grabbed a metal water bottle out of the Infiniti "before taking a position in front of that vehicle." Fitzgerald called his bluff and hit the gas, Kamrowski leapt onto the hood, and they were off to the races. The full video must be seen.

For over two miles, Fitzgerald drove down the Mass Pike with Kamrowski doing his best Zoe Bell impression, alternating between 70-mph sprints and slow crawls in what Kamrowski described as an attempt to shake him off. Kamrowski also began smashing the Infiniti's windshield with the purloined water bottle in a bid to get Fitzgerald to stop. All the while, fellow drivers were calling 911 to report the wild scene.

"I just kept telling him to 'stop the car, stop the car' and he wouldn’t stop," Kamrowski told CBS Boston.

Before troopers could respond, though, several cars helped box in the Infiniti before the aforementioned armed (and licensed) stranger forced Fitzgerald out of the car at gunpoint. Thankfully, no one was injured. Police soon arrived and arrested both Fitzgerald and Kamrowsk—all that over a fender-bender.

Appearing in court this week, Fitzgerald was charged with assault, leaving the scene of an accident, and negligent operation of a motor vehicle. His driver's license was also suspended. His lawyer Michael Chinman argued that Kamrowski, who was charged with disorderly conduct and malicious damage to a motor vehicle, deserves at least some of the blame.

"Fortunately the encounter ended with the car coming to a stop with other people present, including the police, and there was no opportunity for further attack by the man on the hood," Chinman said, according to the Boston Herald. "I just don’t think the evidence is there that Mr. Fitzgerald was a bad man."

Kamrowski's lawyer has a different interpretation of the video showing his client desperately clinging to the hood of a car at highway speeds.

"Mr. Kamrowski ended up on the hood. He did not throw any punches, did not attempt to do anything except exchange insurance information... It was an incredibly scary experience. I mean, he can’t really talk about it right now without shaking," attorney Joseph Comenzo said.