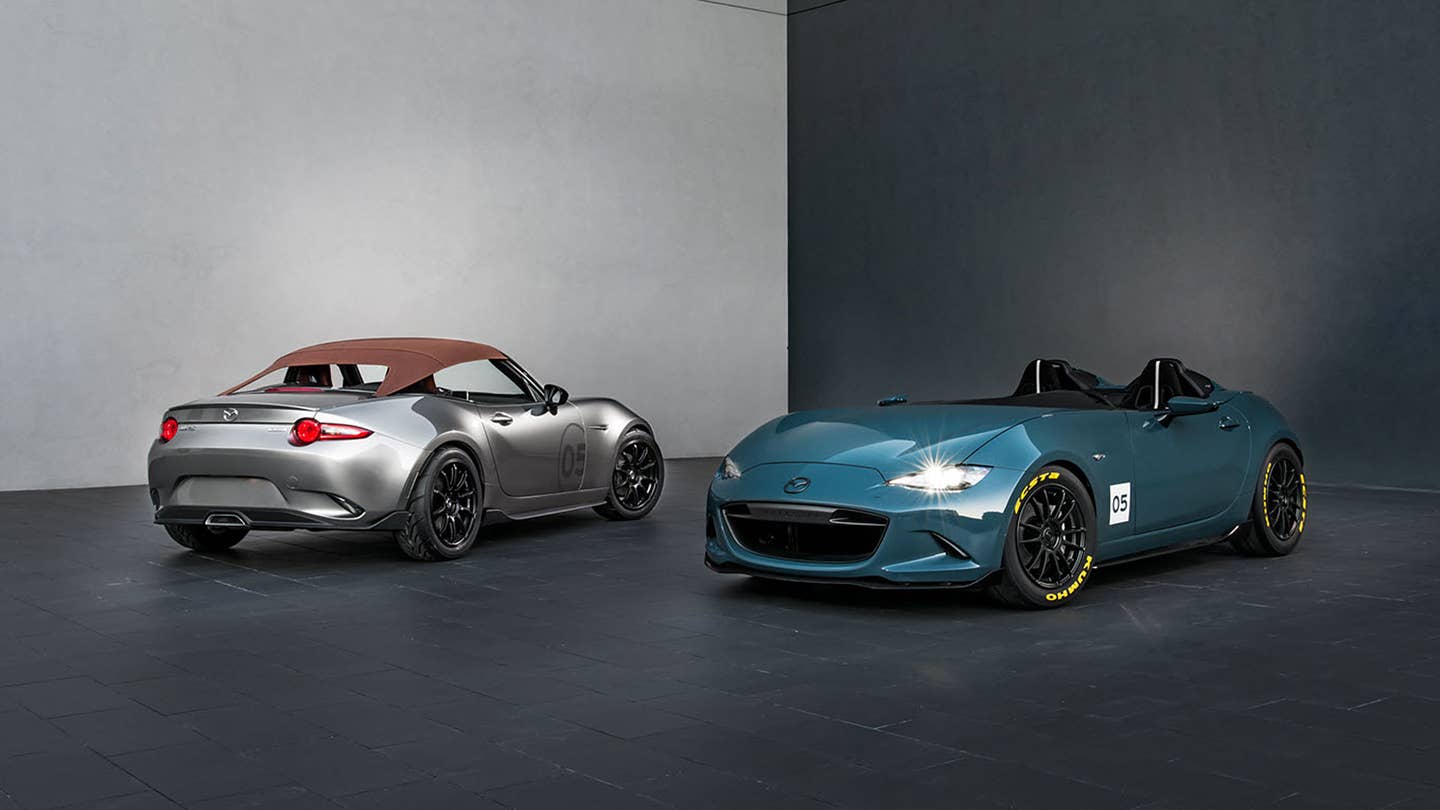 If there’s a more elemental sub-$30K sports car on sale than the new Mazda Miata, it’s probably a used Mazda Miata. The car’s grip on The Drive’s collective imagination has left indents just above our temples. But, as our chief auto critic Lawrence Ulrich opines in his review, the Miata could use some tightening: suspension, steering, more responsive brakes. (Speak for yourself, Lawrence - Ed.) Mazda has a compelling response—two of them, actually, a pair of concepts set to debut at SEMA this week, the MX-5 Spyder and MX-5 Speedster. Both take divergent approaches to the same end goal: Focus.

The Spyder starts with uprated four-piston Brembo brakes and Yokohama racing tires, then swaps the Miata’s folding top for a bikini-like swatch of taut fabric that anchors at two points just forward of the trunk hinge. The Speedster is a more SEMA-appropriate fanboy fever dream: Brembos, Custom RAYS 57 Extreme Gram Lights wheels, Kumho racing slicks, a Blue Ether paint job and Alcantara-trimmed carbon-fiber racing seats. Oh, and no windshield. In sum, Mazda found 250 lbs of bloat on the already bantamweight Miata to delete for this concept. No extra power for either car, but cutting out weight unburdens the Skyactiv 2-liter engine. Translation: more speed.

With such distilled visions for the Miata, an idle mind invariably turns to Mazdaspeed, the brand’s dormant line of performance variants. Don’t go reading the SEMA tea leaves for clues about a Mazdaspeed Miata, though.

“We haven’t even announced a Mazdaspeed version of the Miata, so of course I cannot say whether the Speedster or the Spyder will inform such a model,” says Mazda North America spokesman and gonzo race-car driver Jeremy Barnes. “But if you look historically at the Mazdaspeed line, you see that they appear a couple years behind their standard cars, and we continue to push and improve.”

The Speedster and Spyder do hint, however, at Mazda’s continued commitment to fighting bloat. Says Barnes: “Lightweighting is a key aspect to how we approach performance.” So were we to see a Mazdaspeed Miata, it’s fair to assume a lower body mass index. Beyond that, the Speedster and Spyder can merely be appreciated for what they are: show cars worthy of your chin drool.