Your Burning Questions About the 2021 Toyota GR Yaris, Answered

You can’t have it, but you want it soooo bad! It’s okay, you can live vicariously through me. 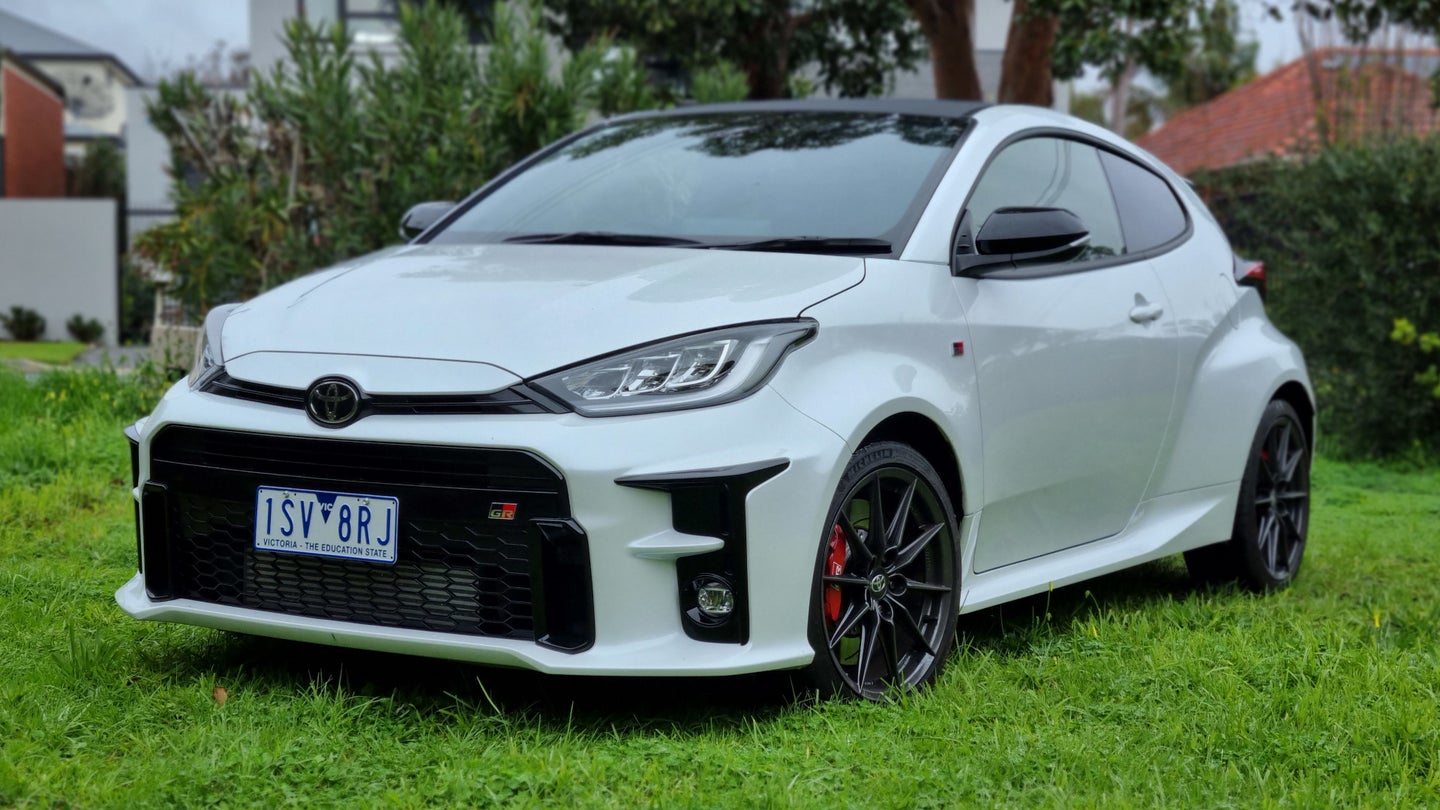 As a citizen of the Antipodes, I was uniquely placed to drive that most forbidden of modern JDM fruit, the 2021 Toyota GR Yaris. In fact, Toyota Australia blessed me with the top-of-the-range Rallye spec, complete with its limited-slip differentials and circuit-tuned suspension. It was a hoot. Duh.

The little rally-bred monster was mighty fun to punt around the hills, but to get the full goss on that, you'll need to read my review. (And also this take on it while you're at it!) But I haven't forgotten you, fine readers. You asked me some really great questions about the GR Yaris last month. Let's get to answering!

Can you sit up straight, or does your head hit the roof? — Up-In-Smoke

The GR Yaris does have quite a high, upright seating position. I’m five-eleven and not a liar, so I had plenty of headroom. Wearing a helmet would not be a problem, either. The wheel was telescopic, too, which helped as I have long legs and a shorter torso. Those significantly taller than me may struggle, but it doesn’t feel like a particularly small car inside, front or rear.

What’s its ability to use as a daily or jump in for a longer boring journey? — Brew W

I would have no hesitation in road-tripping this for eight hours a day, even with one or more other adults in the car. There’s plenty of legroom front and rear and it’s comfortable inside. The radar cruise and lane-keeping assist aren’t super great on crowded suburban roads, but out on the open highway, they’re likely to perform much better. I’d still probably disable the lane-keeping and just run the radar cruise alone, which you can indeed do by holding down a button on the steering wheel.

How smooth does that 3-cylinder engine feel? — Chris H

It sounds a bit rough and ready at times but there’s no real vibration felt in the car or any other issue. If anything, I enjoyed the rugged, rough sound. Made it feel purposeful, you know?

Whereabouts in Aus are you? — Bumpoh

What do you think of the drivetrain? If you put knobs on the corners would it be robust enough for some back roads womp rat hunting? — 58 Welsh

It puts power down well and makes the car feel like it’s on rails. Top stuff. Not sure what the following question means precisely, but… the ride height and suspension control is good enough that you can fang it with abandon through rougher country roads. It’s great.

I would love to know your take on the 3 cylinder engine, and how it compares to bigger performance engines with 4 and 5 cylinders. Does it feel like it’s a bit pushed for power? — AFondoConFe

I never felt like it was lacking in power. At any point, I could just roll onto the throttle and quickly break the urban speed limits if I wanted to. While the horsepower number is lower than cars like the Golf R, the GR Yaris is also much lighter. On a horsepower-focused track, you might wish for more, but as a backroad warrior, much less so. If you’re accustomed to high horsepower though, your take may differ.

How comfortable would the GR Yaris be rippin' up logging roads?  Boost, manual, and AWD says "rally car", but the tire choice doesn't seem to fit the idea of leaving pavement. — RIRFIB

I think it would probably be awesome if you weren’t worried about rock chips. You’d want to change the tires ASAP, though. Also, the large brakes may stop you from fitting smaller wheels easily if you wanted something with more sidewall. I’m not a rally expert, but a touch more ground clearance wouldn’t hurt if you were really going ham.

What is it like for a 6'5" human to fit into and drive such a tiny toy car? Can they actually drive it or simply pose for photos. — Edsel

I’m not six-five so I don’t know for sure, but I suspect some people that tall could fit, depending on torso/leg length ratios and other factors.

It definitely feels connected, far more so than any power-steering equipped car I’ve driven before. Within an hour I felt at one with the steering and really enjoyed carving up the backroads.

How good is the transmission? — QuikThink

It’s good! The clutch feels great and the shifter is nice to use. I wasn’t able to easily heel-toe in the short period of time I had due to lockdowns, but I think it would be doable. There’s also the iMT system to help which, again, I didn’t really get to test well. It’s not the greatest, most snickedy-shift car I’ve ever driven, but it’s good.

When you're on your third year of ownership, the shine has worn off, and you're tired and maybe a little bit hungover, and you just want to get to work so you can plop your butt in a chair and stare haggardly into the middle distance while contemplating the choices that have brought your life to this point, will buying a GR Yaris Rallye seem like a good choice, or a bad one? — Halftrack El-Camino

If this was my daily, I would have no problem driving this car to work hungover with a splitting headache and regrets swimming in my brain. Stay out of the throttle and it’s as drivable as any regular Yaris. It won't pet your hair or tell you everything's going to be okay, no. Nor will it tell Alex from upstairs to get off your back about those overdue reports. But it will get you to work—on time, I might add—without drawing attention to your disheveled state in the parking lot.

Got a tip? Email me at lewin@thedrive.com