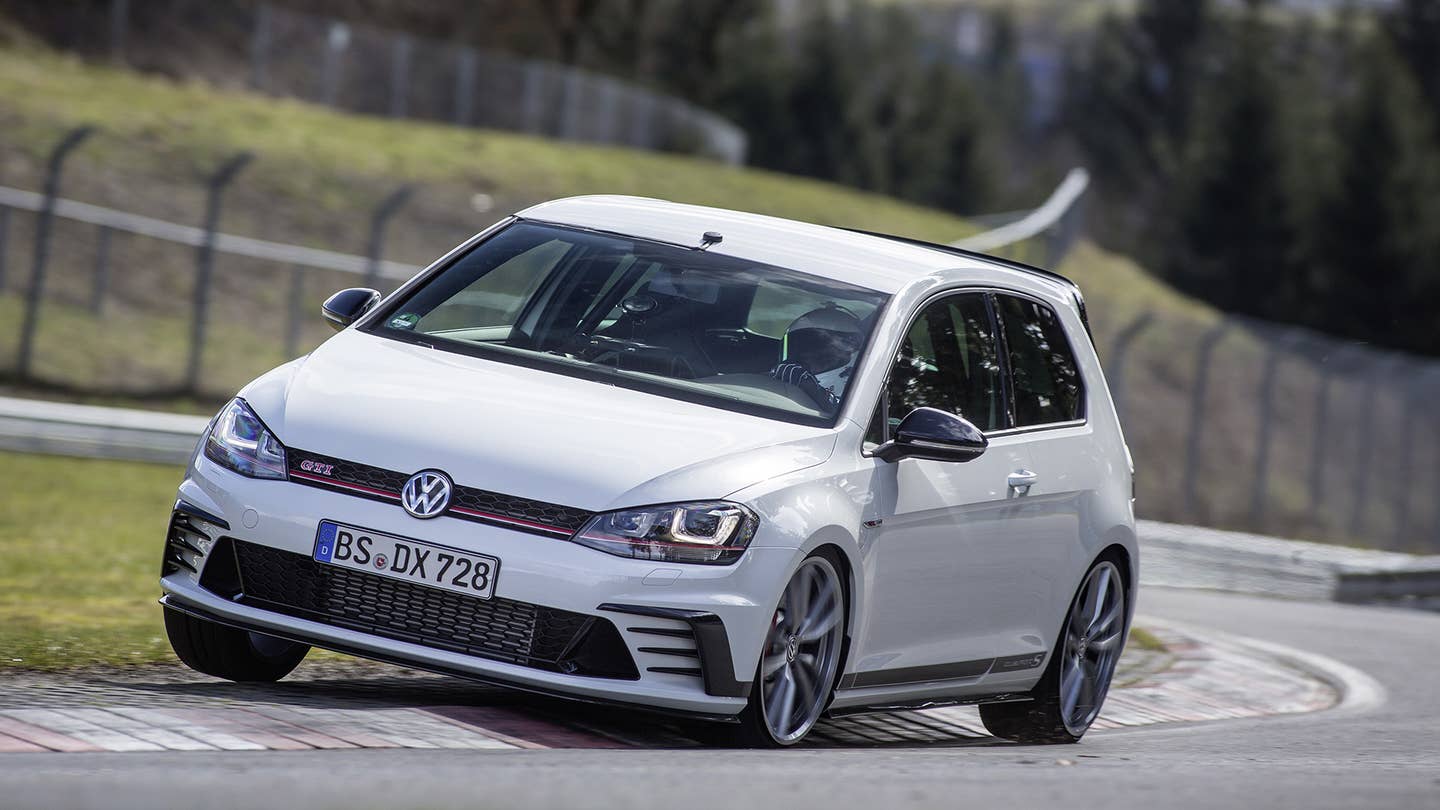 As of this week, the Golf GTI Clubsport S is the world's mightiest front-wheel drive car, lapping Germany's most famous track in 07:49.21. Rock on, beautiful box.

In the world of hot-rodded economy cars, many think of the bulbous, French, mantis-eyed V6 Renault Megane as the world's reigning hatch. In fact, as measured by Nürburgring lap times, that title has long been held by the Honda Civic Type R, a Europe-only special with over 300 turbocharged horsepower and wing that could elevate a turkey vulture. Now, its 07:50 lap is yesterday's carrion.

Though it's unavailable to us, the GTI Clubsport has been a bruiser in the European econobox wars for a couple of years, providing much of the Golf R's power without its nannying all-wheel drive. This latest version, the Clubsport S, ratchets things to tighter tensions by jettisoning its rear seats (auf weidersehen, famous GTI practicality!) and pumping up the boost—resulting in 305 hp—and donning semi-slick tires over 19-inch wheels. Adding lightness and power applying extra stick to the rims: all classic race car tricks that have turned the Golf into a legitimate bruiser. With weight as just over 2,800 pounds, the Clubsport S gets to 60 mph in 5.8 seconds and continues up to 164 mph. Two liters never felt so strong.

Per tradition, Volkswagen undertook a bit of computing trickery in the form of four chassis settings. Comfort, Normal, and Race are all standard fare; "Nurburgring" keeps throttle response hot, steering tight, and the 65mm tailpipes on full howl in combination with the softest suspension setting, which accommodates for the Nordschleife's notoriously lumpy surface. Some might call that "teaching to the test," but results are results.

For now and probably for always, the GTI Clubsport S remains forbidden fruit, though our hearts don't ache too much. Like us, you'd rather take four friends on a whirlwind 155-mph sprint than one loser on a 164-mph loop, right?

The New Volkswagen GTI TCR Racecar Is Already Sold Out

The racing hot hatch of your dreams is already out of reach. But VW has a consolation prize.

Because your college backpack is no longer cutting it.