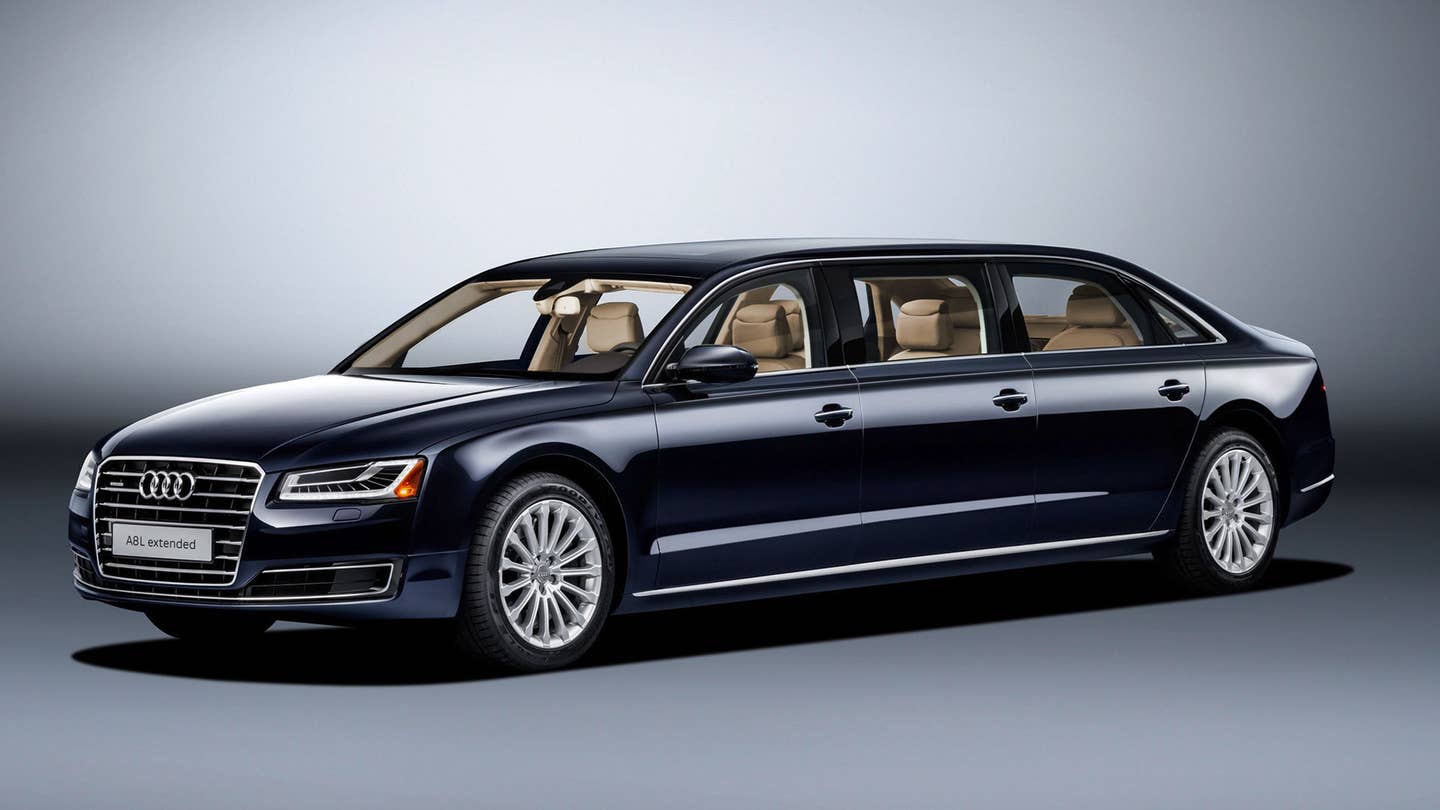 Though hotrodding can be a hugely complex undertaking, there's usually a simple formula at its center: Little car, big motor. Chopped-and-lightened Ford Model with a 7-liter whatever? Perfect. A (probably beige) '97 Mercedes C-Class and a 4.3-liter AMG V8? Wunderbar. With its latest one-off, the Audi A8L Extended, Audi has decided to take the opposite path: adding 3.6 feet to the already long A8L while maintaining the model's teeniest engine, a six-cylinder. If not "hot," maybe Ingolstadt's going for "low and slow"?

To match the rest of the car's advanced aluminum frame and cladding, Audi engineers worked for over a year to create an elongated body that would maintain the model's rigidity without adding unnecessary weight. That means—despite the length, reinforcing beams and added thrones—the 6-seat Audi A8L Extended weighs "just" 5,331 pounds, or a full 600 pounds less than the four-seat Bentley Mulsanne Speed. That allows the Audi's relatively puny 3.0-liter six-cylinder (in comparison, the Mulsanne sports a 6.75-liter V8) to motivate the limousine to 60 mph in an entirely-acceptable 7.1 seconds. (In the Seventies, Mercedes' 6.9-liter 450SEL "hot rod" took 7.5.) In concert with 15+ inch brakes cribbed from the S8, this grand 'n' gaudy Audi should perform just as serenely as the standard car.

The seating arrangement is anything but standard, however: Audi swapped the classic face-to-face arrangement of the Lincoln Limo for what we can only call a "bus" arrangement; in other words, three pairs of forward-facing seats. While the layout is surely less nausea-inducing, we can't help but wonder how inter-row communication will suffer. An important suit in the second row cranes his neck backward towards the important suit in row three:

"Small sandwiches will be served at the meeting, Chancellor."

Audi hasn't revealed who commissioned the Aluminumousine, but that small-displacement engine points to China and its strict road taxes. Goodbye, beautiful whale.

Arriving in a stretched Town Car is passé. Let’s get weird.

For Prom Night in the Mojave, a Jeep Wagoneer Limousine