The Best Black Friday Tool Deals for 2020: Gifts for the Gearhead

Tools make a great holiday gift; here are some fantastic deals you shouldn't pass up 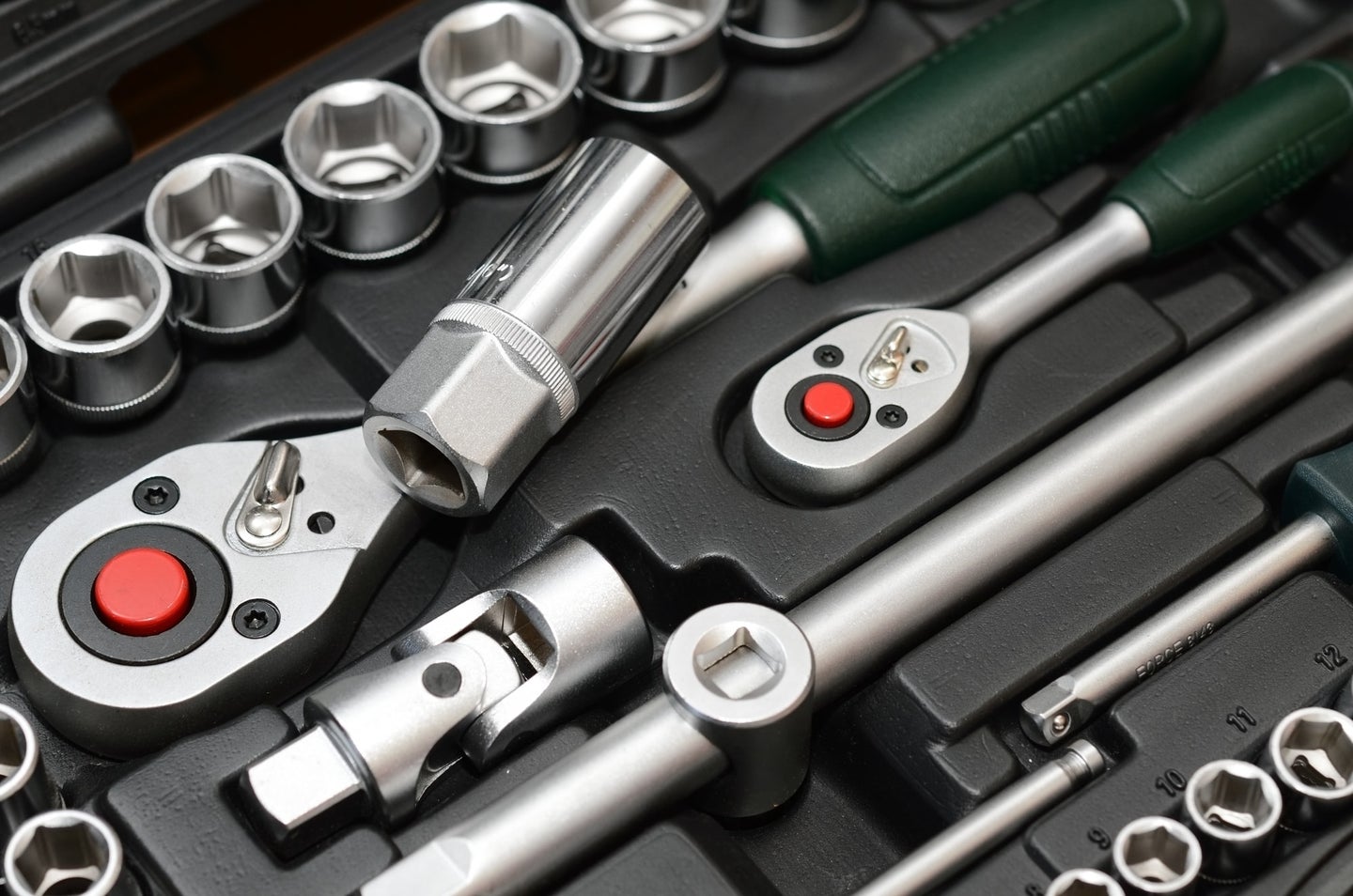 This story was updated on November 24, 2020 with new products and fresh deals.

It’s that time of year again: Black Friday sales on TVs, gaming consoles, and toys are enough to make most go nuts. But if you’re in the market this holiday season for deals on gifts for the car geek, garage rat, or gearhead in your life, it can be hard to separate the chaff from the heavy metal. Some of the best Black Friday tools sales and deals are going on right now. You just have to know where to find them.

Even though it's early, many retailers are already putting out some killer deals. And the best part? Most of them are available online, so you don’t even have to leave the house to shop for holiday gifts.

We're highlighting what we feel to be some of the best Black Friday tool deals for working men and women. Being that it's early in the game, this list is subject to change. That means if you find anything down below appealing, you're going to want to act fast before the deal is gone for good.

And keep checking back, because we’ll be updating this list on the best Black Friday deals on tools as deals go live. (Editor’s Note: Prices were valid at press time, but prices can change and deals expire.) 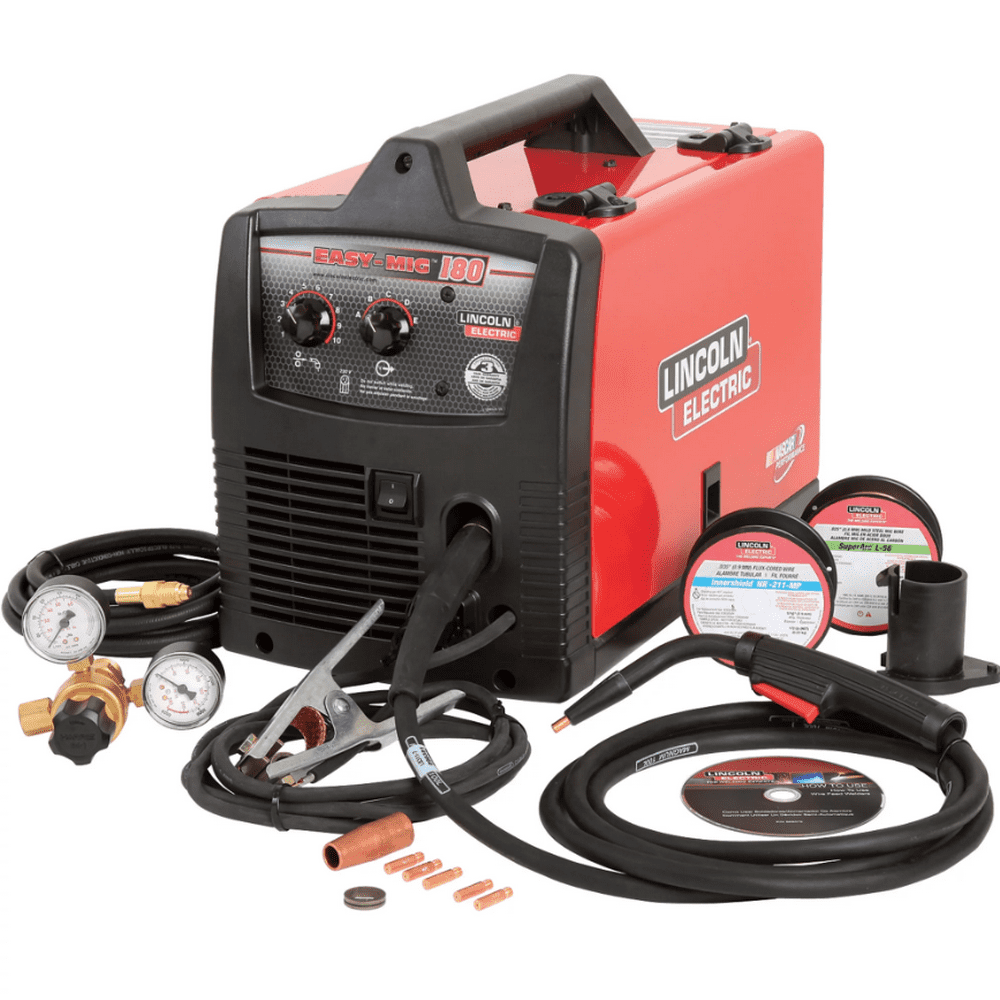 Every handyman needs a good welder, but high-quality ones typically list for premium price tags. That leaves most hobbyists and do-it-yourselfers with a machine that might limit their horizons. But right now, you can scoop up a welder that’ll knock that sweetheart of yours right off their feet. Walmart is offering the Lincoln Easy MIG 180 for more than half off the list price. This Lincoln welder is capable of welding 18-gauge sheet metal up to 1/2-inch-thick plate. That means they can use it for welding up body panels on their car to building structural framing for benches, and more. Being a MIG welder, they can use it with gas or with flux-core wire. This feature makes it perfect for indoor and outdoor welding so long as there is 208/230v power. 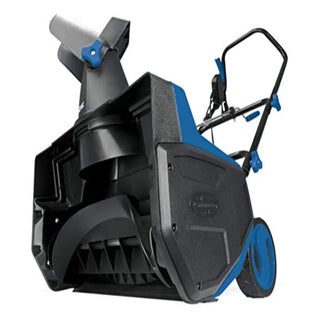 What’s great about this snowthrower is that it will make life more enjoyable for anyone who lives with the person who gets it as a holiday gift. Rather than spending hours shoveling the driveway and sidewalk, one can blast through it in minutes. That does mean you’ll be able to safely leave home much quicker, but ultimately the person removing snow will be a lot less miserable about it. This particular model also has the advantage of running on electrical power rather than a gas engine. There’s no having to let it warm up or spend money on fuel. And don’t worry, it has plenty of power on account of the 12-amp motor. So, if you’re on the hunt for a snow-removal tool, you’re going to want to snag this one.

You Save: $70
BEST BUY
25% off YI Technology Nightscape Dash Cam You might be wondering how a dashcam counts as a tool. Well, it’s an essential device in the case of an accident because it holds proof of what took place and who is at fault. This is a scenario none of us like to think about, but there really isn’t another device that can aid in such a situation. But, if you’re looking for a more heartwarming take, think about all the adventures your loved one goes on. The things they see and the memories they make can fade with time. A dashcam is a great way to share and relive those moments spent behind the wheel. Honestly, it is the kind of thing any gearhead will love. So, head over to Best Buy and pick the Nightscape Dash Cam because the price will be tough to beat when looking for a quality unit. 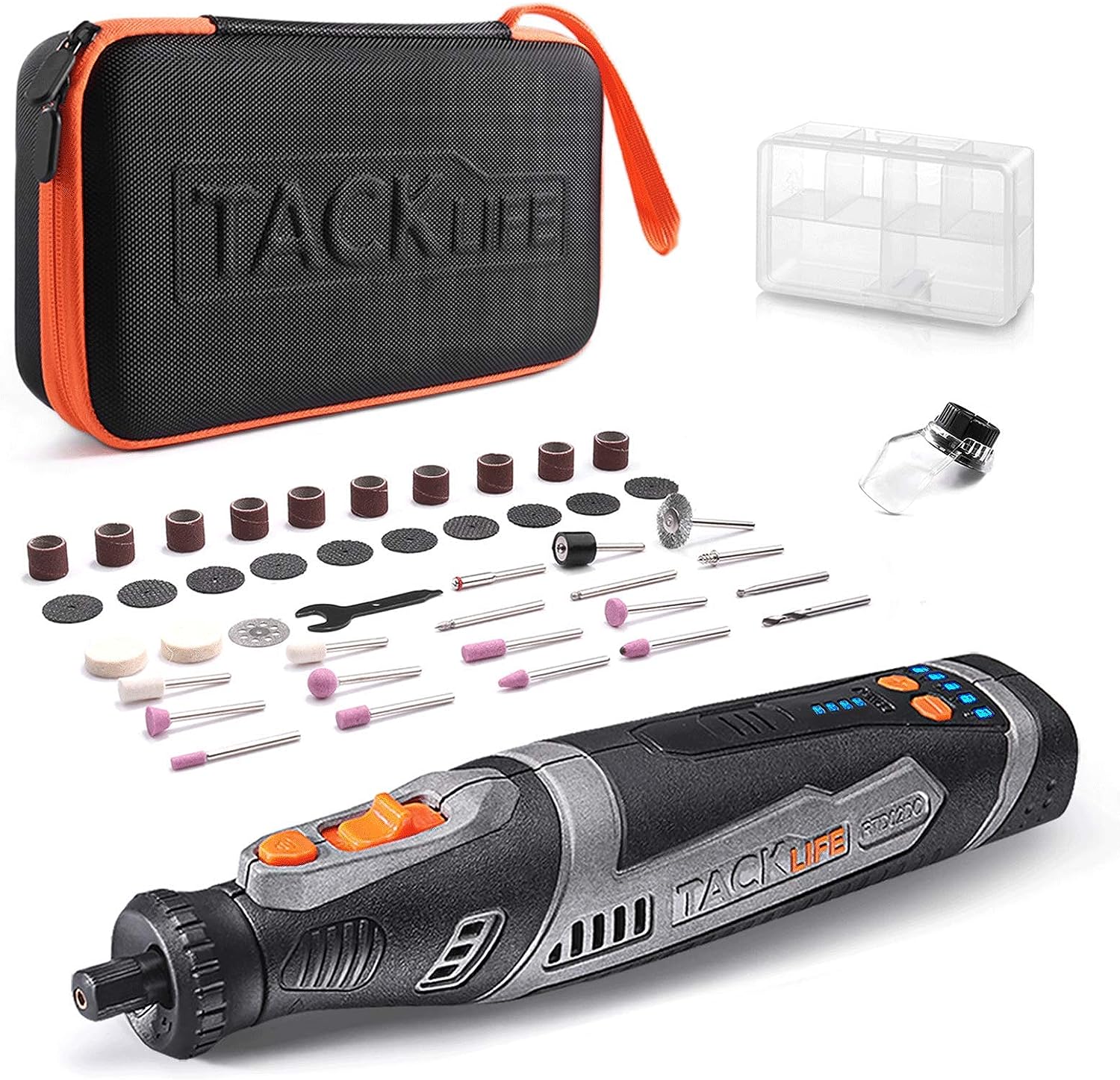 A rotary tool is the kind of device that opens up the door to a whole new world of possibilities. It either speeds up performing mundane tasks or allows one to do things they could never have. It’s also the kind of tool many folks want to add to their collection but don’t end up doing so for many years. That said, you can really impress your loved one by gifting them with this handy little rotary tool from Tacklife. It might not be a top-of-the-line offering, but it performs great, comes with 43 accessories, and is perfect for beginners. What’s so unique about this model is that it’s cordless. There’s no power cord to monkey with as you work, and in the early stages of learning how to handle a rotary tool, this can make a significant difference. It also comes with a nice carrying case and a variety of accessories to get moving.

You Save: $16 after Digital Coupon & Promo Code 5I6CYOFT 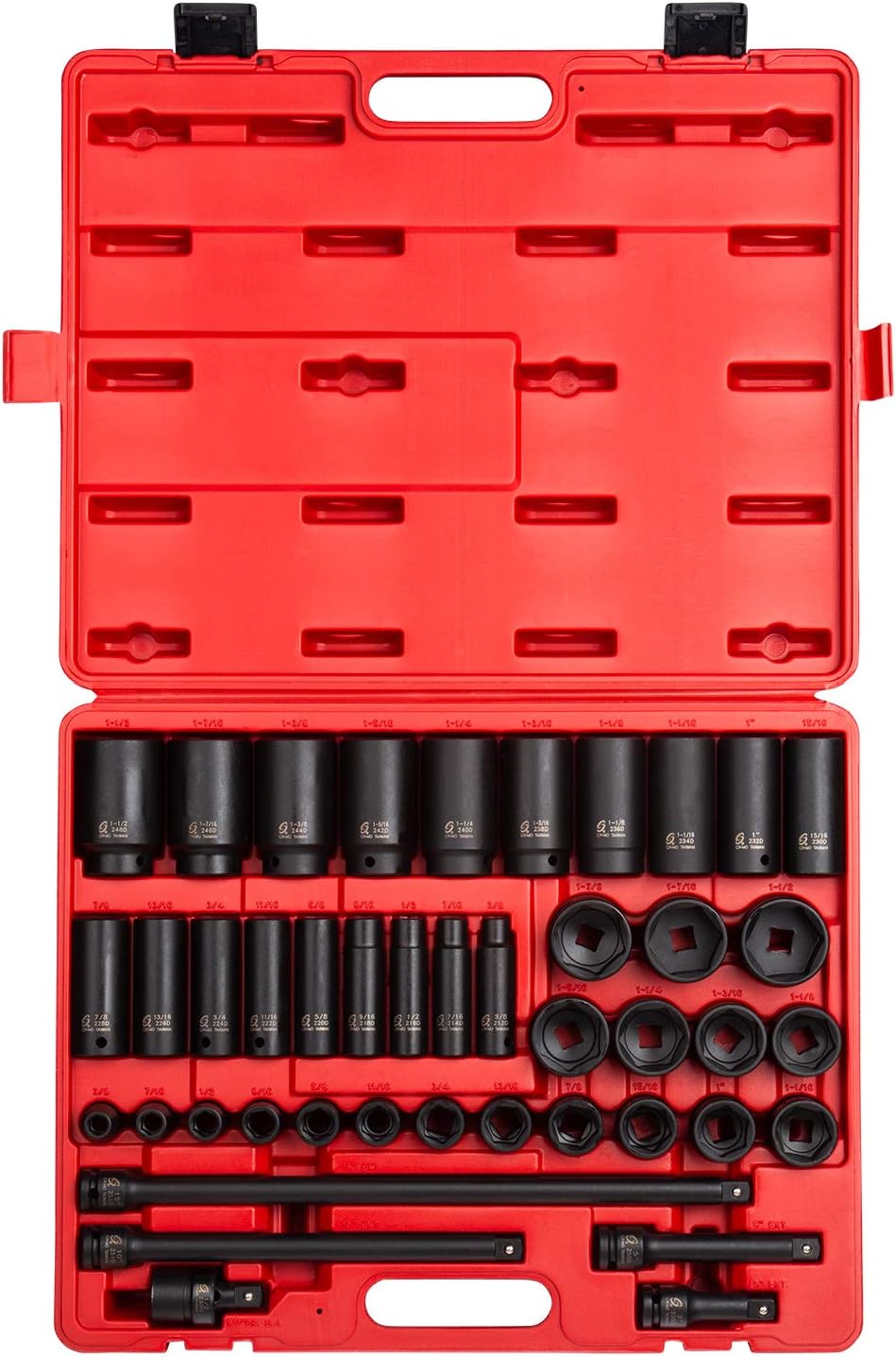 For a lot of professional auto mechanics, Sunnex is the go-to company for impact sockets. The quality and reliability simply outworks the competition. But with premium quality comes a premium price, and that’s why you should take advantage of this phenomenal Pre-Black Friday deal. It’s really unheard-of. Sunnex tools rarely go on sale, so over 50 percent off is an undeniably great price on a gift the handyman or car nut in your life will truly appreciate—and use—for years to come.

This set includes 38 1/2-inch drive impact sockets for pretty much any automotive project that features SAE sizes, making it perfect for those who work on classic cars. It has a wide range of deep and shallow sockets, which only amplifies its usefulness. It also comes with extensions and an adapter to protect delicate chrome surfaces—making it ideal for auto restorers. And of course, Sunnex hooks it up with a blow-molded case to help prevent losing any of the pieces. If you’re stumped about what to get the car geek in your life this holiday season, this is a top-flight gift idea for Black Friday 2020. And you can get it right now.

You Save: $180.71
Home Depot
BOGO on Select Milwaukee Power Tools 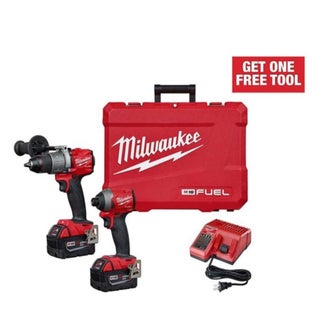 Right now, Home Depot is running a deal that allows you to add up to two Milwaukee power tools to your purchase free—when you buy one of three Milwaukee tool kits. You can go all out and walk away with an entire collection when you choose the M18 FUEL 18-Volt 4-Tool Kit. Or you can snag their M18 18-Volt 2-Battery kit, and they'll throw in something for those batteries to power. We should mention that these kits are pre-made, and Milwaukee decides what tools come with the kit you purchase. Still, there is a wide variety of pre-packaged deals to select from, meaning you can walk away with the right gift for your gearhead.

Sale Price: Buy One, Get One Free with Select Kits 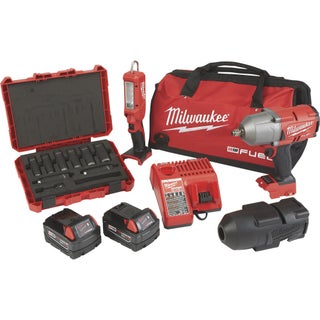 If you know that gearhead in your life loves Milwaukee tools, but you’re not sure what to get them, you need to check out this deal at Northern Tool. Every garage needs a good impact but the hand at work no longer needs to rely on corded or air power to get the job done. The Milwaukee M18 FUEL impact in this kit can deliver 1000 ft-lbs of fastening torque and can rip stubborn bolts loose with 1400 ft-lbs of removal torque. There’s literally nothing on that prized hot rod or truck that this monster can’t deal with.

To sweeten the pot, when you take advantage of this offer you’ll be hooking them up with an LED light, two batteries, and a charger, along with an impact socket set. When you purchase this setup you can also snag an M12 FUEL ratchet and battery for free. That means you can stack on another $228 in savings. Whether you give this gift is a starter set or to upgrade a current tool collection, it's hard to pass up this 215-piece Mechanic's Tool Kit. It features a wide variety of sockets, drivers, and even some Allen keys that sets you up to tackle pretty much any job. But, what you may find surprising is the fact that this kit includes three 90-tooth ratchets. That higher-tooth count really puts this kit ahead of others in its price range because it can speed up the process in tight spaces. It might not be a professional-quality set for use on the job. But for the DIY warrior? It's a steal at less than $100. 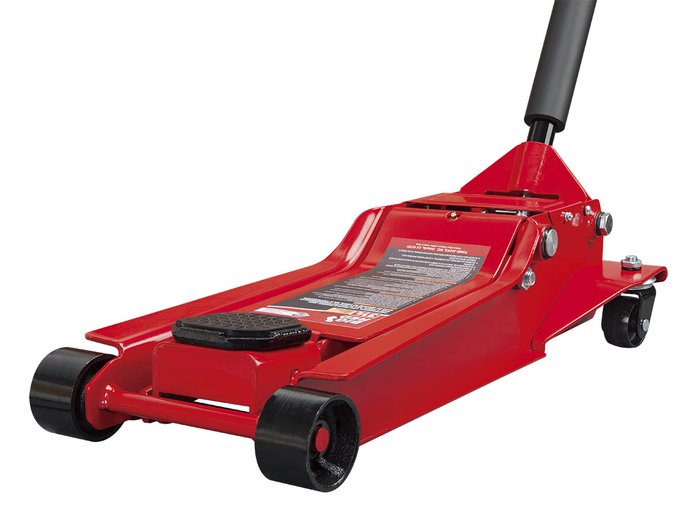 You can never have too many floor jacks. Unless space is limited in the shop, that gearhead in your life can certainly put a new jack to work. This jack is perfect for someone working with trucks and off-road vehicles. For one, it can lift up to 7,000 pounds, which is far more than they’ll need for an average truck or Jeep. Second, it has a lift height of up to 21-1/16 inches. That means they can use it on vehicles wearing lift kits and oversize tires. Yes, they may already have a jack, but they can always use this as a backup or for removing items such as the axle assembly during those massive projects. Even those without a lifted truck can put it to work on pretty much anything. The collapsed height of just under four inches means you can slide it under just about any vehicle with a factory ride height. 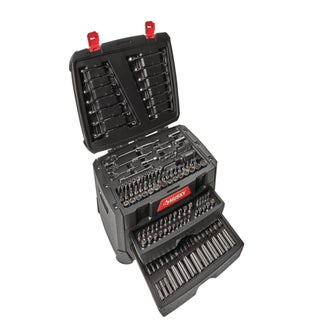 Husky Tools may not be the alpha for professionals, but they're perfect for hobbyists and home tool kits—especially when they're selling for nearly half price. This 270-piece tool kit comes with pretty much anything you'll ever need for working on cars or around the house. 148 sockets, 105 accessories, 14 wrenches, and three ratchets are more than enough for most projects. Husky has been going above and beyond to improve their brand by tailoring its brand to working hands. They take abuse, feel good in the hand, and feature designs that aim to increase proficiency. Furthermore, this set is backed by a lifetime warranty. 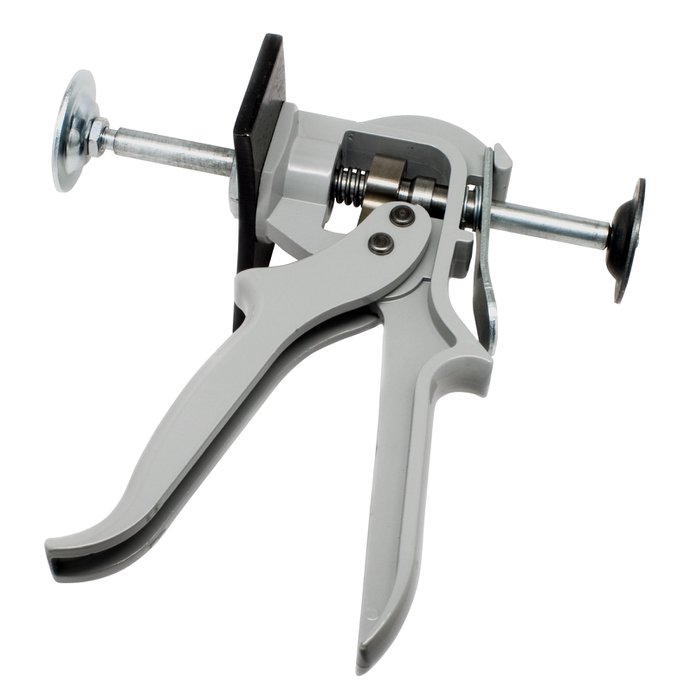 Doing brake jobs on your vehicle is a great way to save time and money, so long as you have the right tools on hand. And while it's not that big of a problem to use traditional clamp style caliper tools, it's still not particularly fun. This tool's design does away with any issues one may have with other devices by allowing them to compress pistons with a simple trigger mechanism. Not only does this mitigate any discomfort, one may feel when twisting knobs, but it can get the job done much more quickly.

The good news for you is that it's not all that expensive in the first place, and Pep Boys is knocking 15 percent right off the top. And though it's inexpensive, it will undoubtedly make a lasting impression and possibly even inspire your boo to finally replace those squeaky brakes you've been dealing with.

You Save: $9
Pep Boys
15% off Actron Enhanced Scan Tool 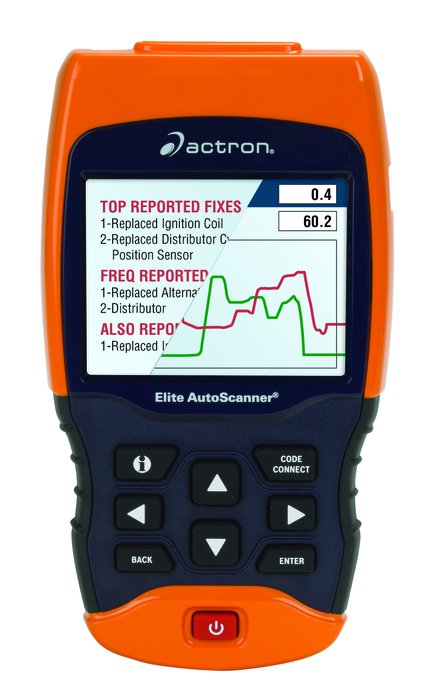 Every do-it-yourself car geek needs an OBD diagnostic scan tool in their collection. This one is a little more costly than others but offers the advantage of working with OBD-I and OBD-II systems. It will work with the pre-1996 model year Ford, GM, Chrysler, Toyota vehicles, and any vehicle from '96-current. Basically, all that means is it’s a perfect tool for someone who tinkers with cars of all year ranges. Of course, it wouldn’t make the list if it wasn’t a great deal. Right now, you can save nearly $40 when you nab this bad boy from the Pep Boys website.