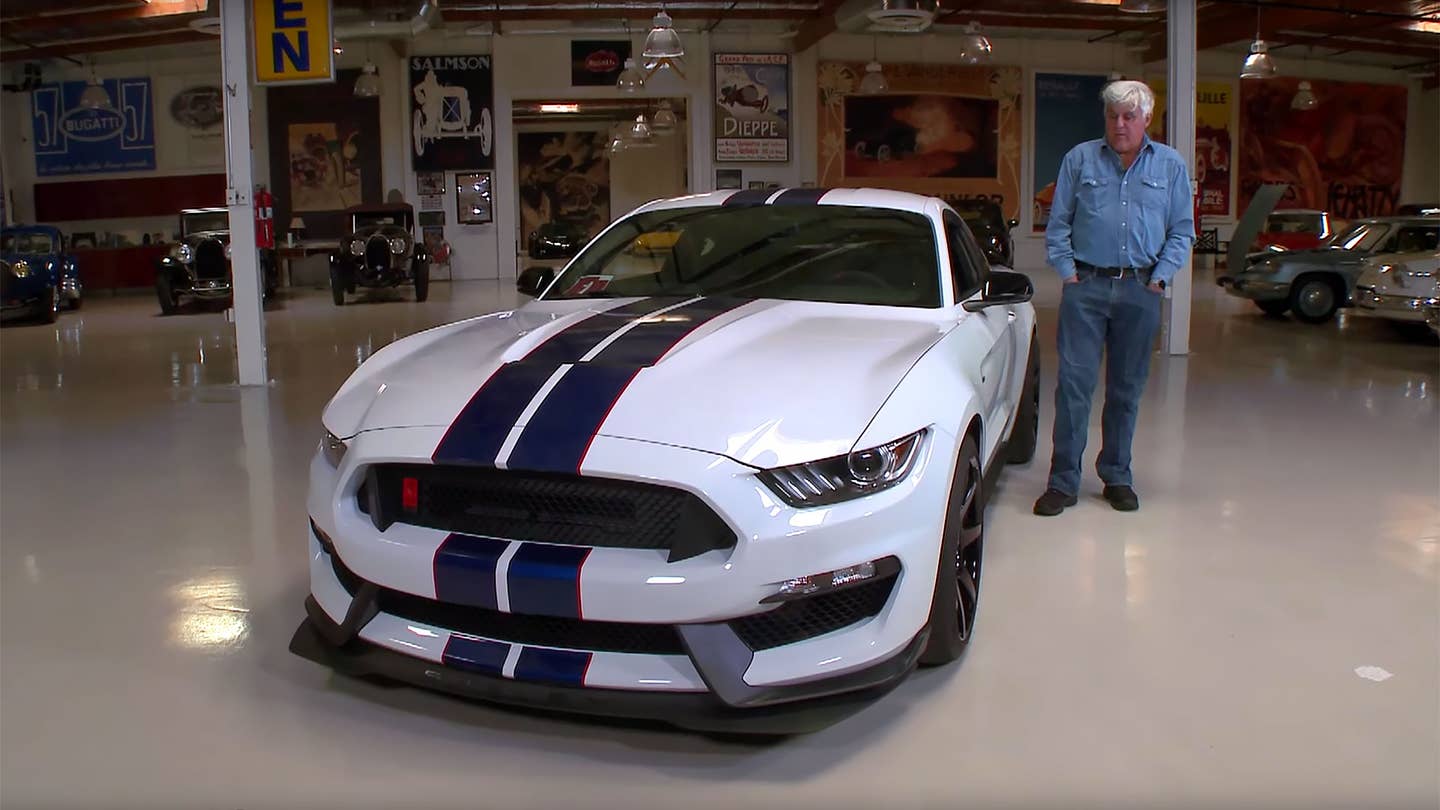 The first 30 seconds of this week’s installment of Jay Leno’s Garage are solely the dulcet exhaust notes of his 2015 Ford Mustang GT350R. The naturally aspirated V8’s throaty growl— as Leno works through the powerband, all the way up to that absurdly high redline (8250 rpm)—is sublime. If the remainder of the 28-minute video was all snarling Shelby plowing through the revs, we’d be fine with that. But Jamal Hameedi, Ford’s Global Performance Vehicle Chief Engineer, flew in from Motor City to talk with Leno about what makes this limited-edition bullet so special. So let’s break that down.

Ford made only 37 R models of the Shelby GT350, in a nod to the 37 racing models that were produced with Carroll’s help 50 years earlier. If we’ve learned anything from the breathing bolt of denim that is Jay Leno, it’s this: Whenever a car comes in limited numbers, he will be the first in line with his checkbook. Leno was pleased that, in another salute to its grandfather, this 350R is the same color as the original ’65, which the comedian also owns (cue jealousy in the form of hatred in the comments). The powerplant is a V8, 5.2-liter four-cammer with a flat-plane crank. It puts out 526 horsepower and 429 lb.-ft. of torque. And get this: It’s 13 lb. lighter than the V8 of a Ferrari 458 Italia. Hameedi knows this because Ford bought a Ferrari 458 V8 and took it apart to benchmark it. Then beat it.

The GT350R is the only Ford to receive this engine, one of the few normally aspirated 500-plus- horsepower engines left on the planet. While it’s not available in any other Ford platform, Hameedi briefly considered it for the new GT but ultimately chose the EcoBoost V6. The flat-plane crankshaft helps the engine breathe better and produce better power, particularly at high rpm. Traditionally, flat-planes have been used on smaller displacement V8s, and the vast majority of American V8s are larger. At 305 cubic inches, the 2015 GT350R’s V8 is not much bigger than the original GT350R 289 engine.

The unique tweaks to Leno’s GT350R aren’t all under the hood. After you get hauling, you’ll need to stop adequately, so custom Brembo brakes were employed. There’s a special two-piece rotor in which the center aluminum section is pinned to the steel rotor, meaning the brake is lighter and affords superior cooling. And while the rear seats have been deleted, Leno swapped out the stock Recaro buckets for Ford GT seats, which he finds more comfortable.

As for the bodywork, it’s all new from the A-pillar forward. To reduce drag, the wide hood has been dropped 60 millimeters in spots, which means its significantly lower than that of a regular Mustang GT. There’s a new splitter to help with downforce; it’s plastic, not carbon fiber, which means it won’t cost a whole new car to replace should it crack. This front splitter is complemented by a carbon-fiber rear wing and sticky Michelin Pilot Cup tires.

The ride height of Leno’s GT350R has been lowered, and Jay can get very granular with stiffness of the suspension system, thanks to MagneRide dampers. The more electrical current sent through the magnetorheological fluid, the stiffer the ride. It’s infinitely variable, for increased control and better handling on the track. Finally, there’s that loud and proud exhaust, which heralds your arrival from miles away. The stainless steel quad tips are mounted to the fascia, not to the pipes, which provides a nice air gap. If you look closely, you’ll see holes visible in the tips. Hameedi says these were necessary because the gummy Michelins which were depositing piles of rocks into the exhaust tips, and this road debris needed to be drained.

Hameedi says Ford sought to create a balanced car in which no one aspect overshadows any any other, or the sum of the bits. Leno thinks Ford has nailed it, calling the GT350R the pinnacle of Mustang development. The episode concludes with 10 minutes of Leno pounding the asphalt, accompanied by a sweet symphony from the tailpipes. More, please.