Is he a blues guitar legend? A muscle car maniac? He’s both, goddammit, and he’s got fine taste in road tunes. 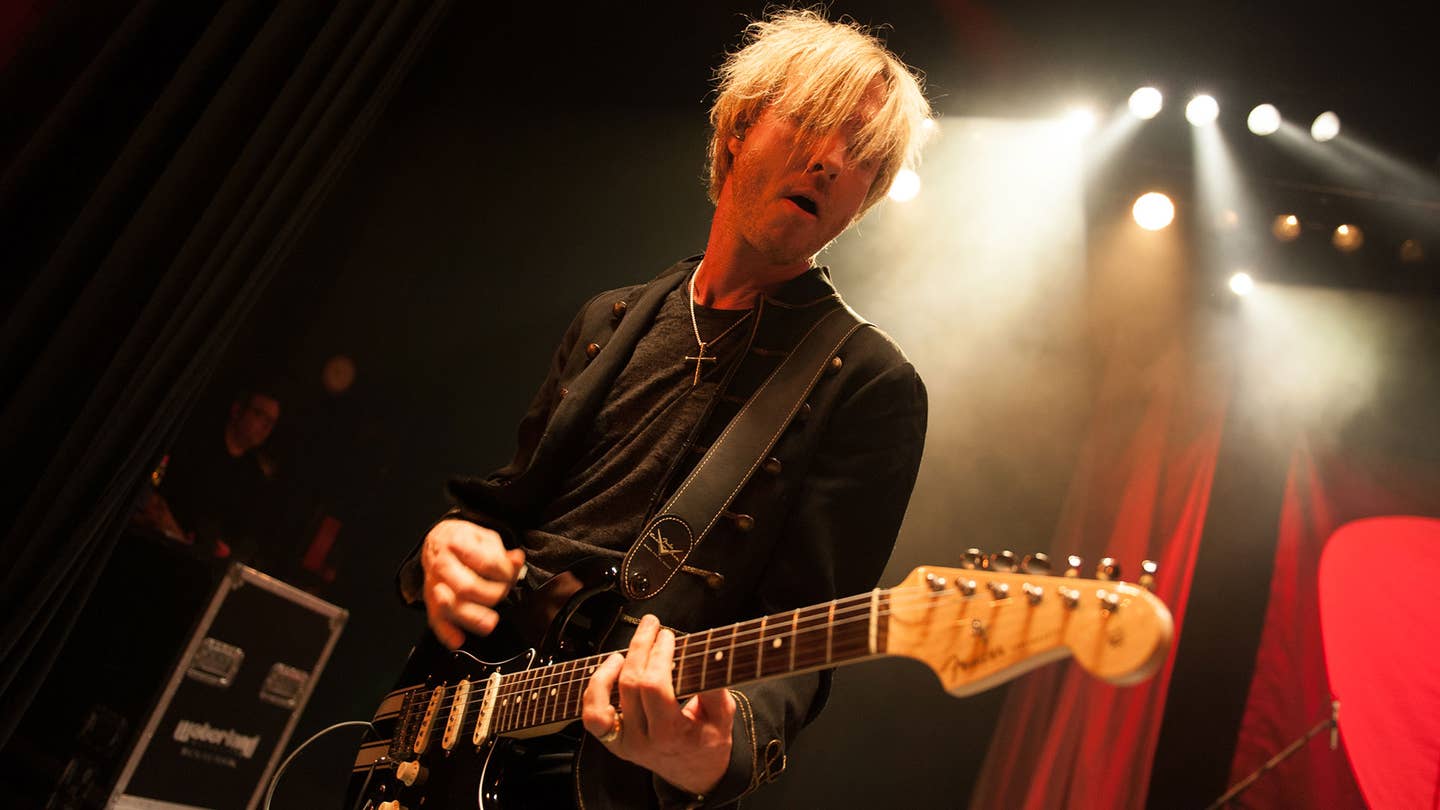 Kenny Wayne Shepherd is a guitar god. The Louisiana-born axe man has sold millions of albums, toured with the Stones and Van Halen, and jammed with Joe Walsh. He’s released albums that’ve hit No. 1 on the charts, and he boasts five Grammy nominations. This year, he’s celebrating the 20th anniversary of his first album: Ledbetter Heights. And he’s only 38. In short, he’s an animal.

All that is almost as impressive as what’s in his garage. The motor head has a 1972 Dodge Charger with a 392 Hemi mated to a Viper six-speed tranny. A 1970 Plymouth Duster with a 406, custom two-tone paint and Foose Nitrous II wheels. Arguably the piece-de-resistance is a 1969 Xtreme Lee, which is a General Lee replica built out of an old Charger that Shepherd bought from an old lady for $11,000. It’s a spitting image of the General—down to the horn that whistles “Dixie,” only it has 600 horsepower and the same carpets used in Rolls-Royces.

The man spends a lot of time on the road. So we asked him for his favorite driving tunes. Stick these in your iCloud and smoke ‘em.

Track No. 2 off the Top’s sixth record, Degüello, is straight-up Texas blues with mean picking and a great horn section. “I just love the groove of this song and the picture painted by the lyrics,” says Shepherd. “Listening to this song really makes you wish you were the guy Billy Gibbons is singing about.” The song’s about a guy with a hot car, who’s hot for a hot girl. The lady wants nothing to do with him, but she wants to drive that car. Maybe they can make a trade? Well she don’t care if I’m stoned or sloppy drunk/Long as she got the keys and there’s a spare wheel in her trunk.

This tune—featured prominently in the film Easy Rider—is one of those songs you’ve heard a million times, and yet you never grow bored of. Some have called it the first hard rock song. (It’s perhaps the first song ever to employ the term “heavy metal thunder.”) “I can’t think of a song more synonymous with driving,” says Shepherd. “The first verse makes you literally want to get in the car and floor it.”

“Love Jimi Hendrix and love this song,” says Shepherd. “The way his lyrics combine the driving experience with his desire for the woman in the song is masterful.” For the record (ahem), the song is track No. 3 on Electric Ladyland, the third and last studio album from Jimi’s band, the Experience.

Time to slow things down (the music, not the driving). “This one is for when you have a few hundred miles left to go and you want to listen to a song that helps you forget about the destination,” says Shepherd. The deepest pathos in this song comes not from the lyrics or the depth of Redding’s soulful croon. It’s the fact that the singer/songwriter—who co-wrote the tune while sitting on a houseboat in Sausalito, Calif.—died soon after recording it, in a plane crash. The single hit No. 1, but Redding didn’t live to know it.

Not only is “One Way Out” one of this Florida band’s most famed singles, it’s also the title of the New York Times Best Selling book about the band that came out in 2014 (a solid read). The Allmans recorded the song live—four minutes and 58 seconds of hard-driving classic blues rock—for the Eat a Peach album. “A great southern rock song that makes you feel like you’ve got a someplace important to go and you gotta get there quick!” says Shepherd.

This isn’t just great classic driving music, it’s rock mythology. On Feb. 19, 1980, AC/DC singer Bon Scott was found dead (vomit asphyxiation after a full night of drinking). You’d think this band would have faded into history’s attic, right? Wrong. Before the year was out, the band put out Back In Black with a new singer, Brian Johnson. It’s still one of the best-selling albums of all time that also happens to be one of the best driving songs. “Huge guitars,” says Shepherd, “that will make anyone get a speeding ticket.”

“I love Edgar’s work,” says Shepherd, “but this song really communicates joy. You can’t be behind the wheel listening to this song and not have a good drive.” You can still catch Edgar (the bro of the late Johnny Winter, another Texas blues master) on the road. See his upcoming 2016 tour dates here.

If you can’t listen to this song without thinking of the opening sequence of the first Cheech & Chong movie, you’re not alone. It’s also impossible to hear this tune while driving without drumming your fingers on the steering wheel. “The lyrics are sparse but the band carries you along on the journey,” says Shepherd. Best enjoyed while driving… you guessed it… a lowrider.

Some would say that the record 1984 was Van Halen’s peak. “Panama,” “Jump” and “Hot For Teacher” are all classics (though truth be told, “Jump” may feature the worst lyrics ever featured in a great rock ‘n roll song). “I love the way this song opens up with drums,” says Shepherd of “Hot For Teacher.” “[Drummer] Alex Van Halen is playing a pattern that sounds like a big block engine with a lopey cam and when cranked up you almost feel like you’re inside of an engine.”

Wanna see Shepherd jam this tune live? Catch it here on Letterman (he’s only 20 years old here!). “You know I had to throw in one of my own songs,” says the axe man. “This one is from my second album and is perfect for a long stretch of highway where you can really open up your motor and let it breathe. And no, it’s not the Foghat song of the same name.”