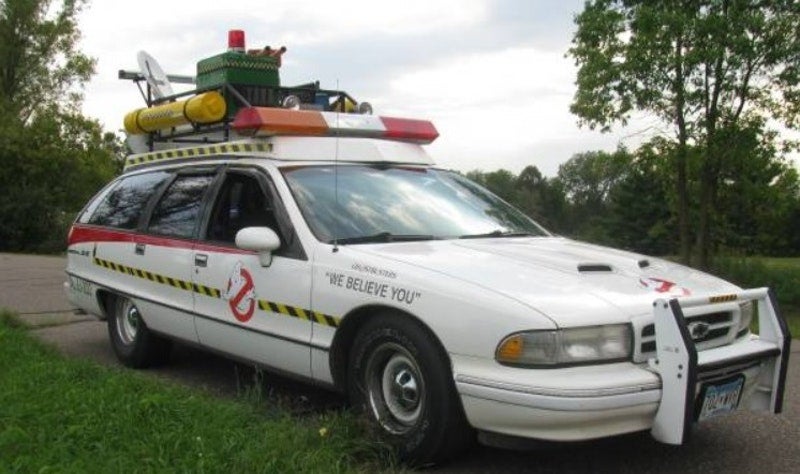 You probably remember the original Ghostbusters cruising around in the Ecto-1 based on a 1959 Cadillac professional chassis wagon or, more recently, a 1980’s Cadillac Fleetwood wagon in the 2016 reboot of the film. The Ecto-1 replica that was for sale in Stillwater, Minnesota is neither of those cars, but Dave, the owner, used quite a respectable candidate for his replica.

It’s a 1991 Chevrolet Caprice wagon. This is the final generation for the beloved GM B-Body, one of the longest-running, best-selling automotive platforms of all time. A car that’s built like a truck, this Chevy is a big, old-fashioned, body-on-frame family hauler with either a 5.0-liter L03 V8, or a 5.7-liter L05 V8 up-front powering the rear wheels. Unfortunately, this was built before Chevy started putting the venerable 5.7-liter LT1 V8 in these cars in 1994.

We were unable to reach Dave for comment because this car was already sold by the time we found it on City Pages. However, in Dave’s own words according to City Pages, this Caprice is “generally awesome.”

"Halloween is almost here and this is the perfect addition/prop for your Ghostbuster party, this car is definitely unique and gets lots of looks,” said the Craigslist ad. “Park it as a prop or fix it or part it out or demolition derby it, the possibilities are endless."

So, why would anyone want this Chevy-based Ecto-1 rather than the original Cadillac for bustin’ duty? Because you could beat the crap out of this car and not really care. Its asking price was just $950 which is about right for a non-Ecto-1 Caprice of this vintage and condition. “Lots of stuff doesn’t work or is generally sketchy,” according to the ad which further justifies the low price. It’s a car you can simply use as a costume rather than obsessively preserving and paying out the nose for like you would be for a more authentic replica.

We can only hope a gang dressing up as the Ghostbusters bought this thing to arrive in style wherever they go this Halloween.