The WienerDrone will deliver hot-dogs to the town of Weiner, Arkansas for a July 4th celebration of the company's newer, healthier brand of sausage. 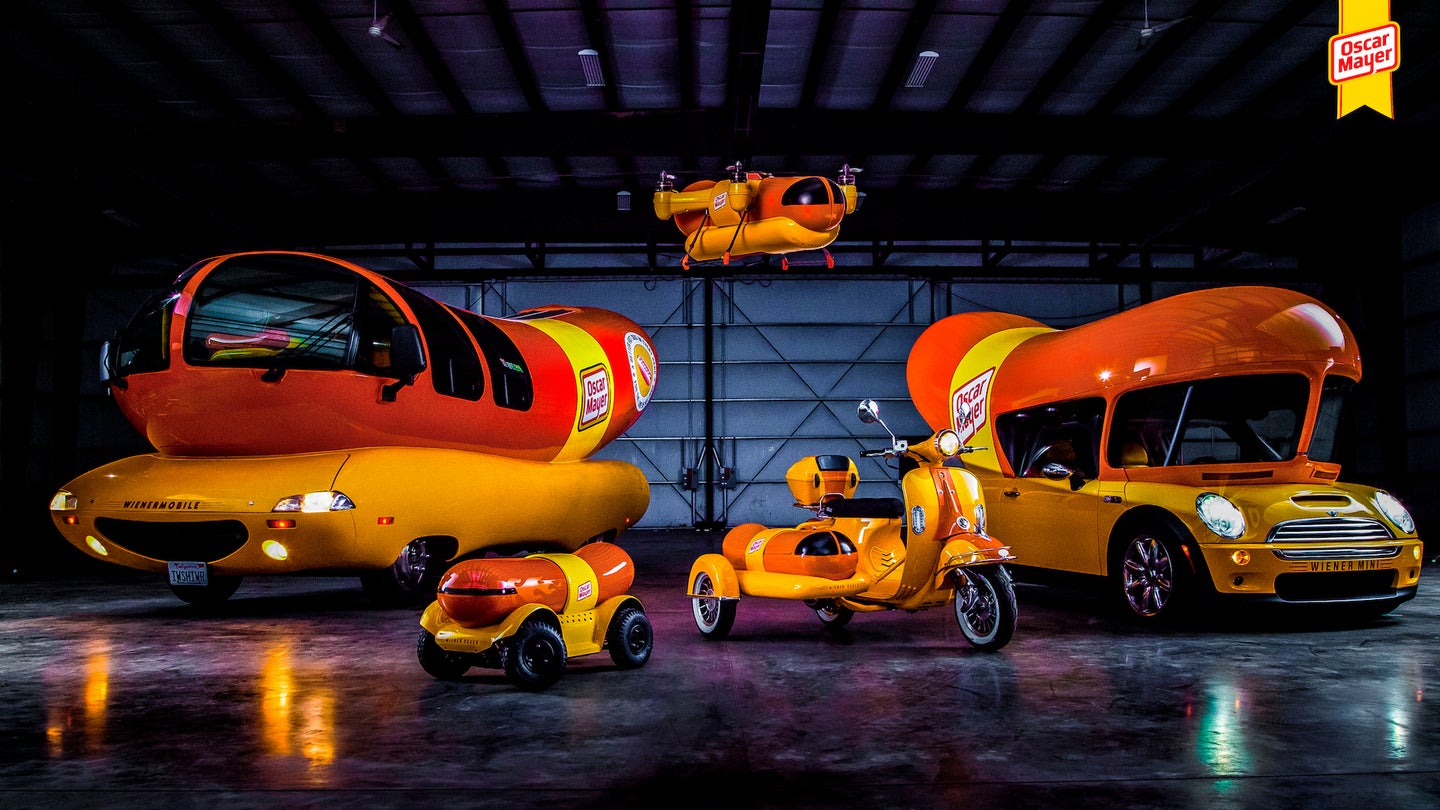 What do sausages and drones have in common? Well, this upcoming weekend will certainly clear that up for the people of Weiner, Arkansas. To celebrate a positive change in direction with its hot dog products and to capitalize on marketing opportunities, Oscar Mayer is using a drone (among other vehicles) to bring the people of Weiner, Arkansas all the hot dogs they can eat for July 4.

The company's "WienerFleet" has been comprised of three vehicles that bring hot dogs to the people—up until now. This time around, Oscar Mayer will not only be delivering a purportedly much healthier variety of their product, but is adding a drone and a motorcycle to its fleet. The "WienerDrone" and "WienerCycle" will be joining the fleet's "WienerMobile", "WienerRover", and "WienerMini" in handing out the new line of sausages to the town of Weiner, Arkansas in partnership with Hands Across America. While the WienerDrone can carry one hot dog per delivery, the WienerCycle has a sidecar which serves as a warming compartment for the sausages.

The fleet additions are part of Oscar Mayer celebrating it now being the first American brand to remove all nitrates and nitrites from its line of classic hot dog sausages, without changing its price point by a single cent, according to a press release.

It's always great to see huge corporations such as Oscar Mayer make positive changes in their product, such as removing any byproducts or added preservatives. It's even more exciting when those changes fuse together with the world of drones.

The "WienerDrone" is the first hot-dog delivering drone of its kind, and is joining a fleet of other vehicles designed to do the same, albeit for different scenarios. While the WienerMobile is suited for long-distance deliveries, the WienerCycle more well-equipped for narrow, inner-city deliveries—the WienerDrone can complete short-distance aerial deliveries that are inaccessible to other members of the fleet, before returning to its hub when finished.

Take a look at this promotional WienerFleet video from Oscar Mayer, which should give you a clearer look at what each of these vehicles can do.

Greg Guidotti, head of marketing at Oscar Mayer, expounds upon the possibilities of delivery, using these kinds of vehicles to achieve transportation that traditional delivery can not. "As the most iconic brand, we’re going where other hot dogs can’t. We’re committed to getting our new hot dog in everyone’s hands – and going to great lengths to do this. We knew that was a job for more than just our existing Wienermobile... So, we’ve expanded our Oscar Mayer fleet, ensuring every American can taste the new recipe because we believe everyone deserves a better hot dog."

For those of us unlucky enough to miss out on seeing Oscar Mayer's WienerFleet in action when its vehicles barrel into Weiner, Arkansas, do not despair. You can follow the fleet on Twitter at @WienerMobile for live updates and footage. For now, take a look at the WienerDrone in-flight.

Make sure to catch the WienerFleet this upcoming July 4th if you're anywhere near the town of Weiner, Arkansas, and don't miss out on the aforementioned chance to win a pitstop near you by entering Oscar Mayer's competition.