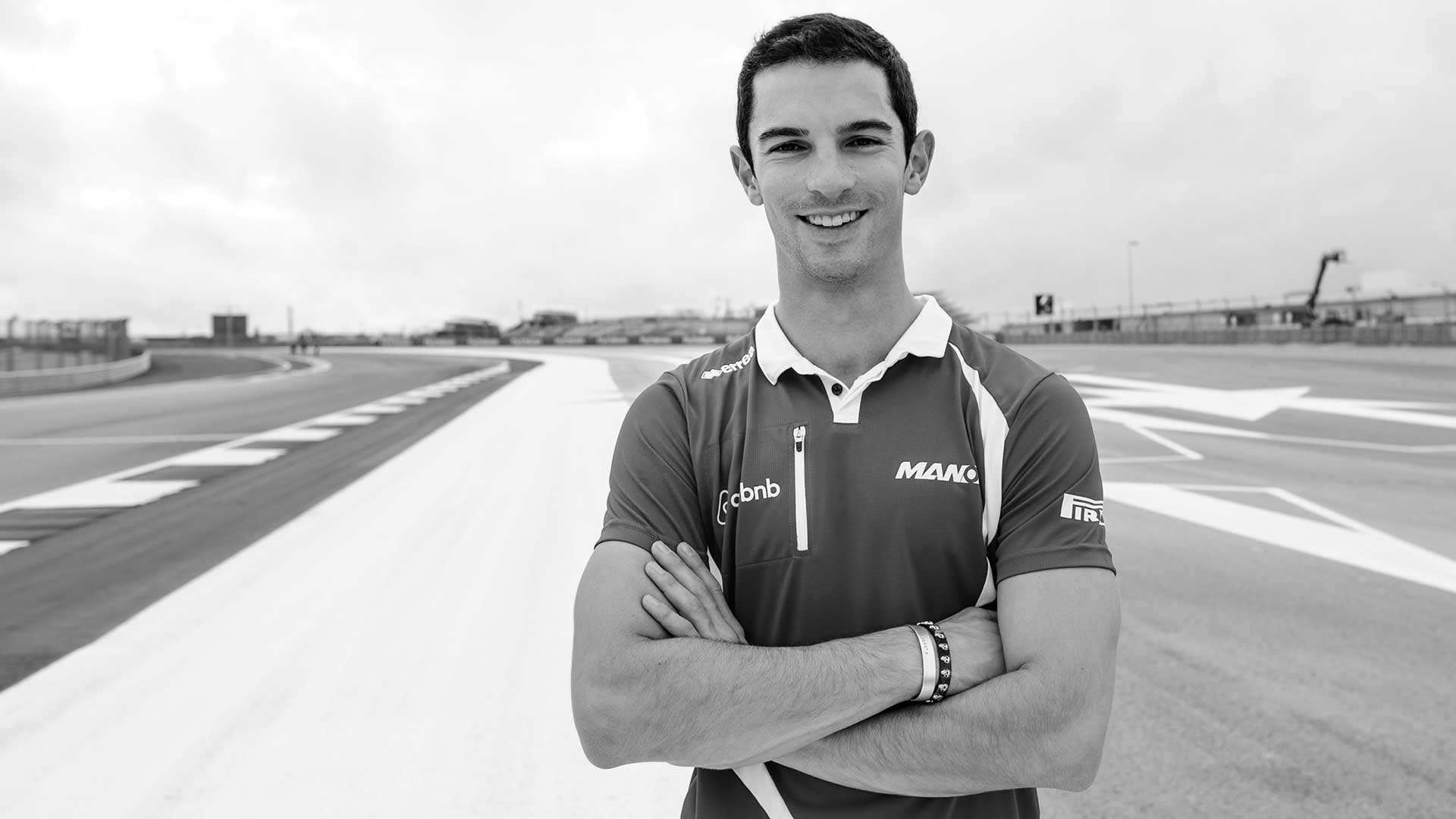 Meet Alexander Rossi. Rossi has been competing in GP2 for the last few seasons, most recently with great success with Spanish team Racing Engineering. Rossi was signed by Manor F1 in mid-Sept. to run five of the remaining F1 races, making him the first U.S. driver since 2007 to compete in an F1 race.Jamey Price 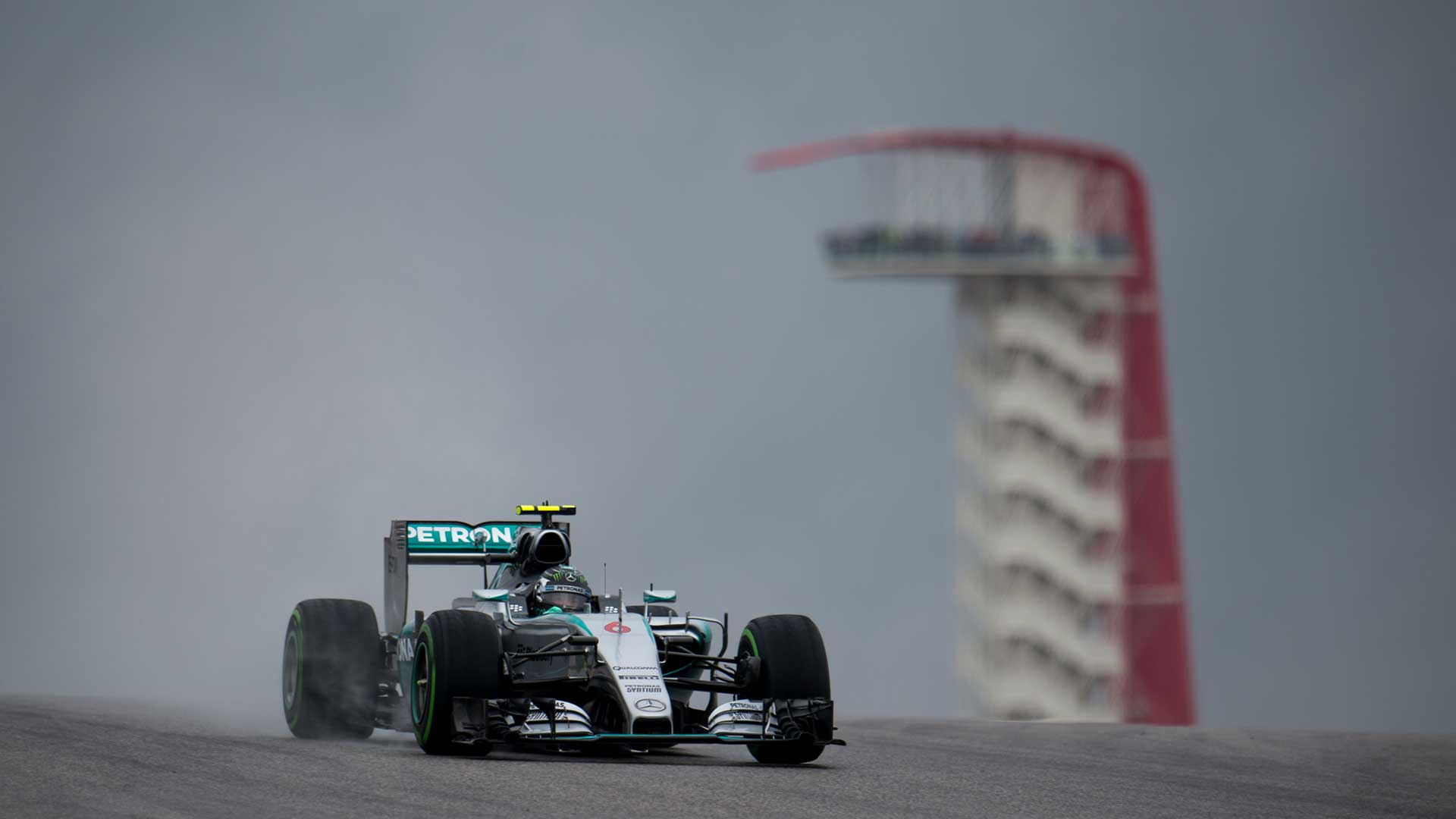 Circuit of the Americas’ iconic tower makes for a nice backdrop as the cars crest the hill and barrel down toward the long back straight. Here, Nico Rosberg negotiates the wet in practice on Oct. 23.Jamey Price 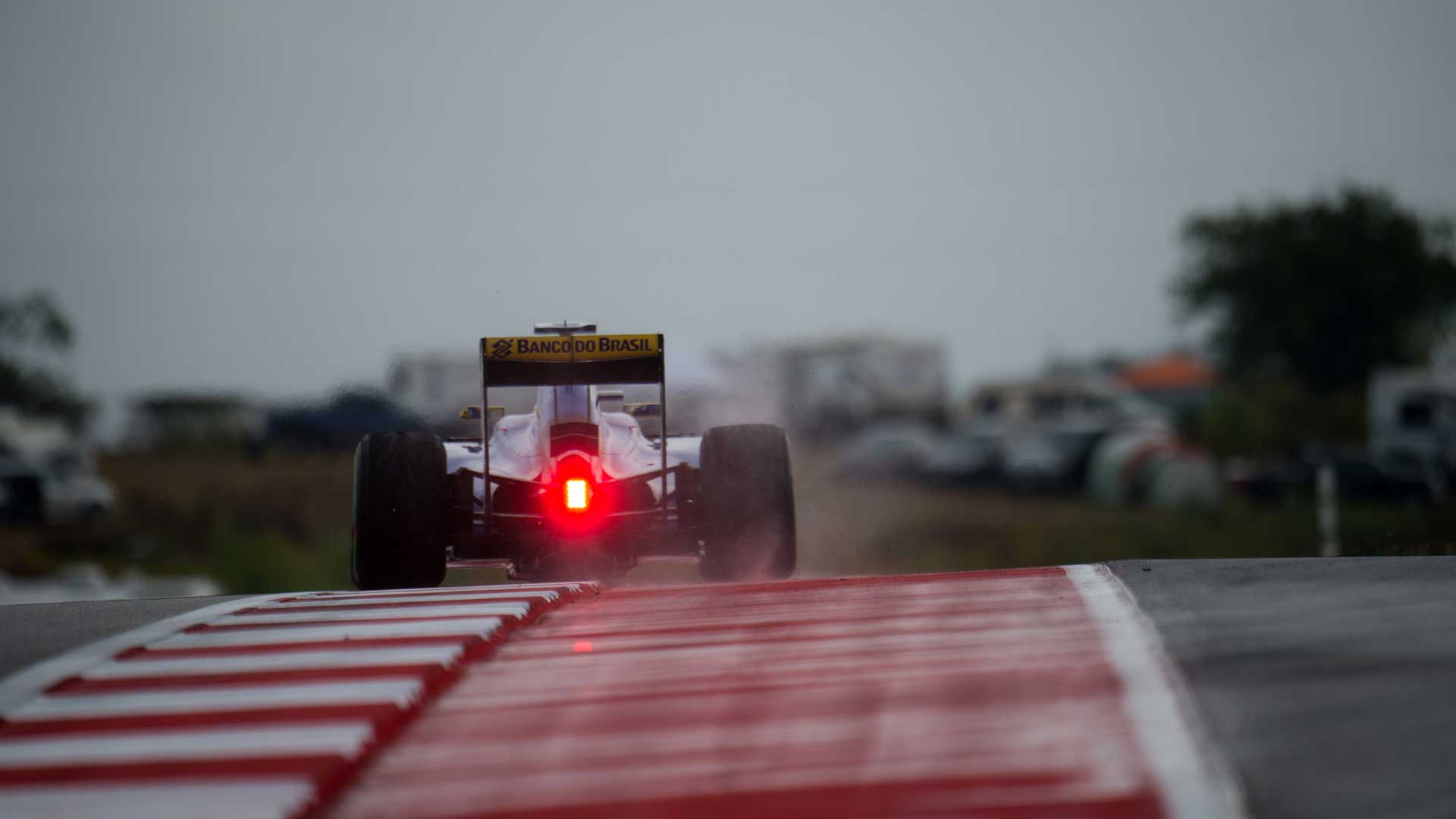 I love the rear of a modern Formula 1 car. The lines and curves make for interesting photos.Jamey Price 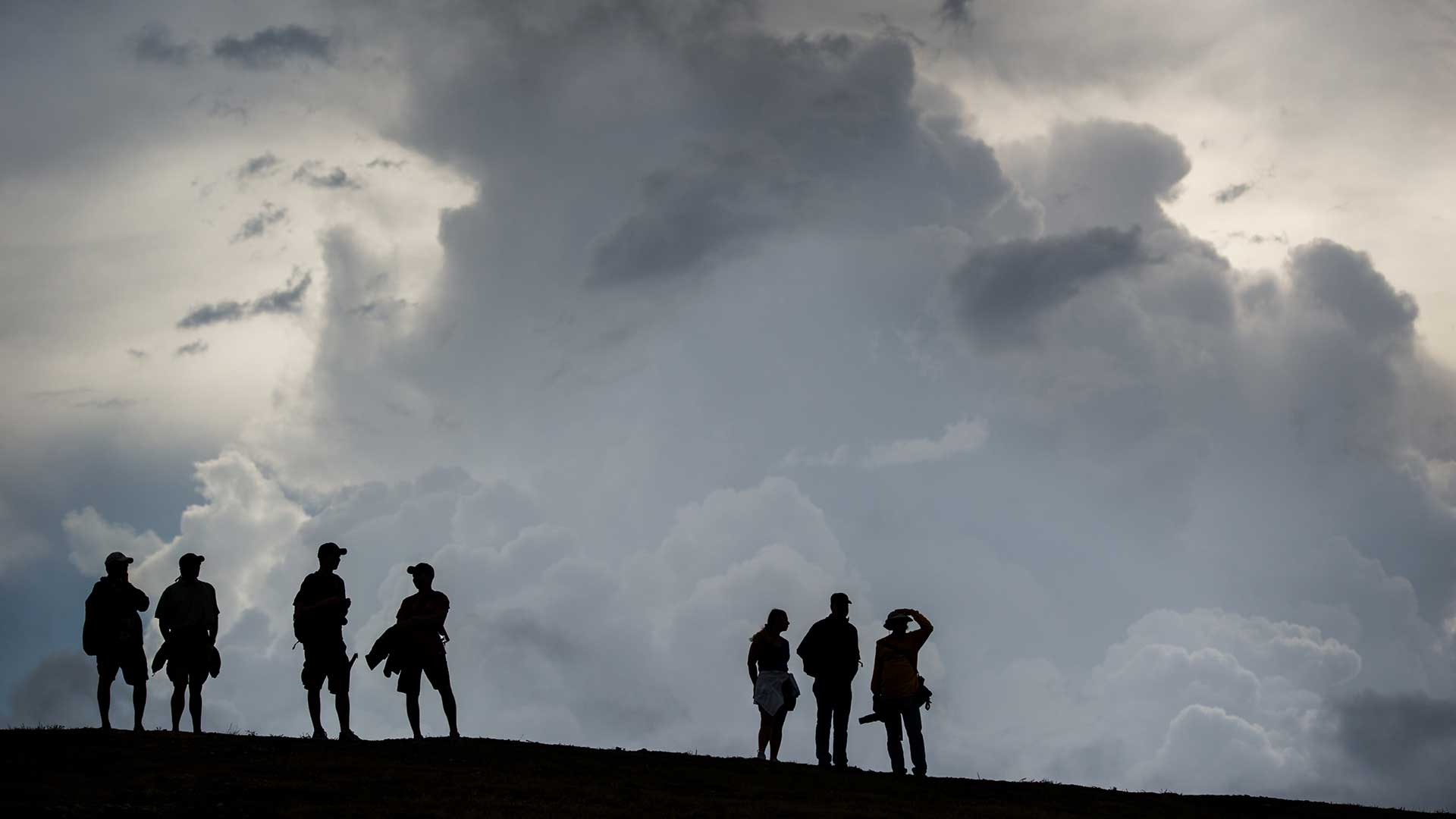 Friday practice isn’t known for bringing out droves of fans. But the few that did come saw most of the drama in the sky, with big, billowing clouds showing the far outer band of Hurricane Patricia.Jamey Price 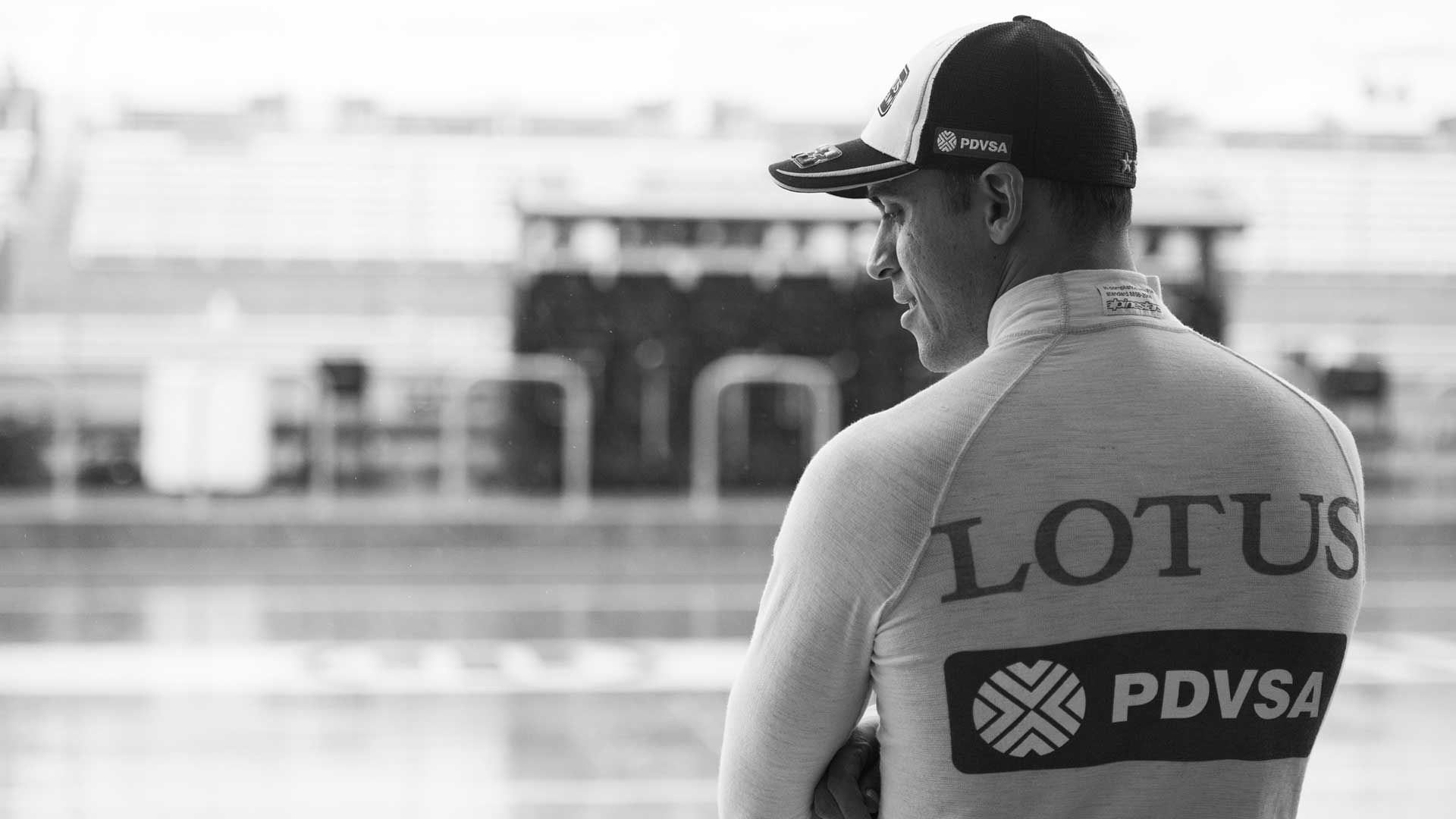 Lotus F1’s Pastor Maldonado stares out at pit lane during Friday’s free practice 2. The session was delayed and ultimately cancelled because of deteriorating conditions. F1 cars can run in the rain, but lightning and heavy rain made things a little too hairy.Jamey Price 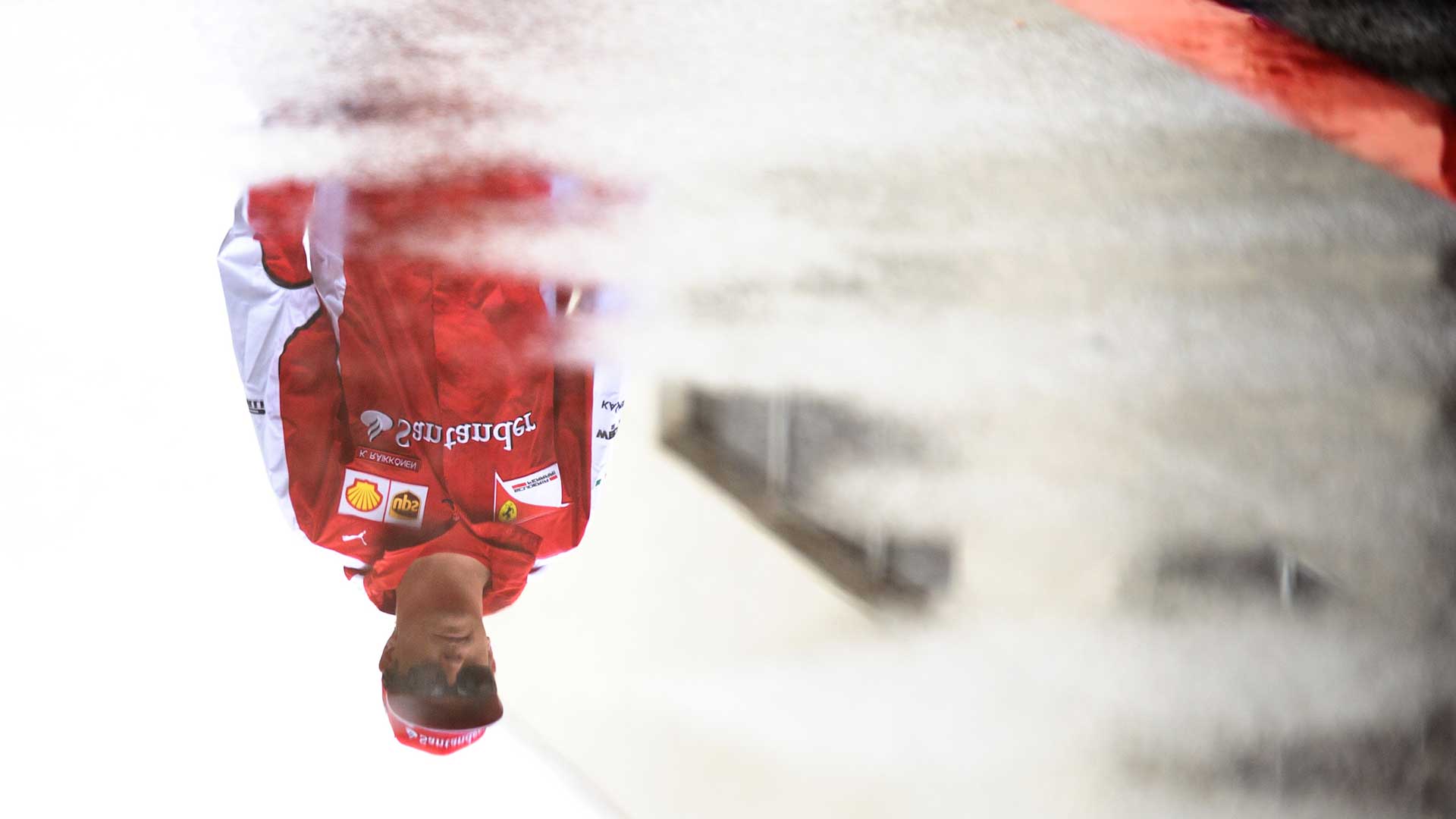 Kimi “The Iceman” Raikkonen, after the driver’s meeting on Friday afternoon. The lack of Friday action worked to the photography corps’ artistic advantage.Jamey Price 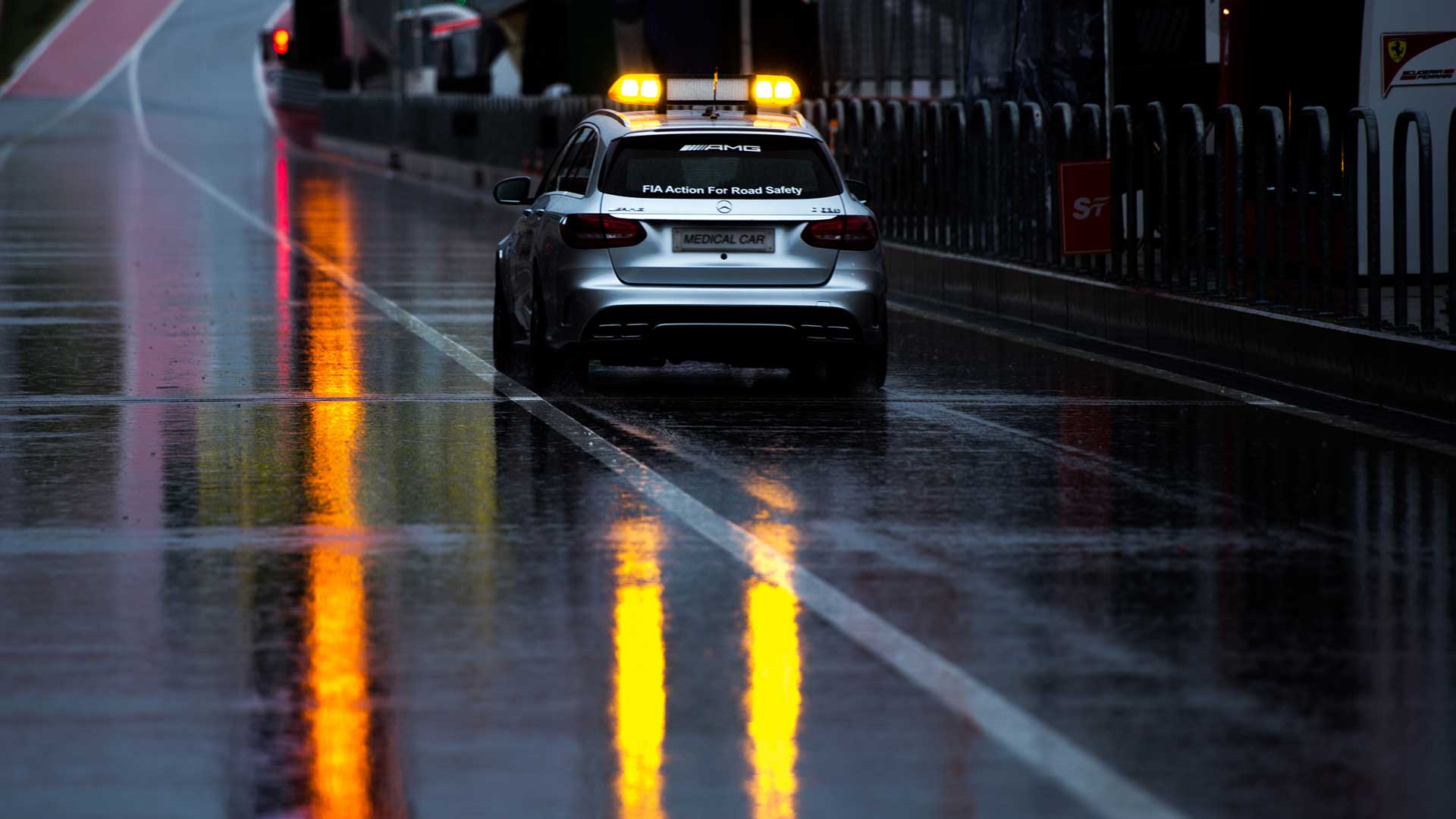 The FIA medical car heads out on track for a reconnaissance lap on Saturday morning before practice 3. The rain had been steadily falling for 24 hours, and the waterlogged track was borderline unsafe.Jamey Price 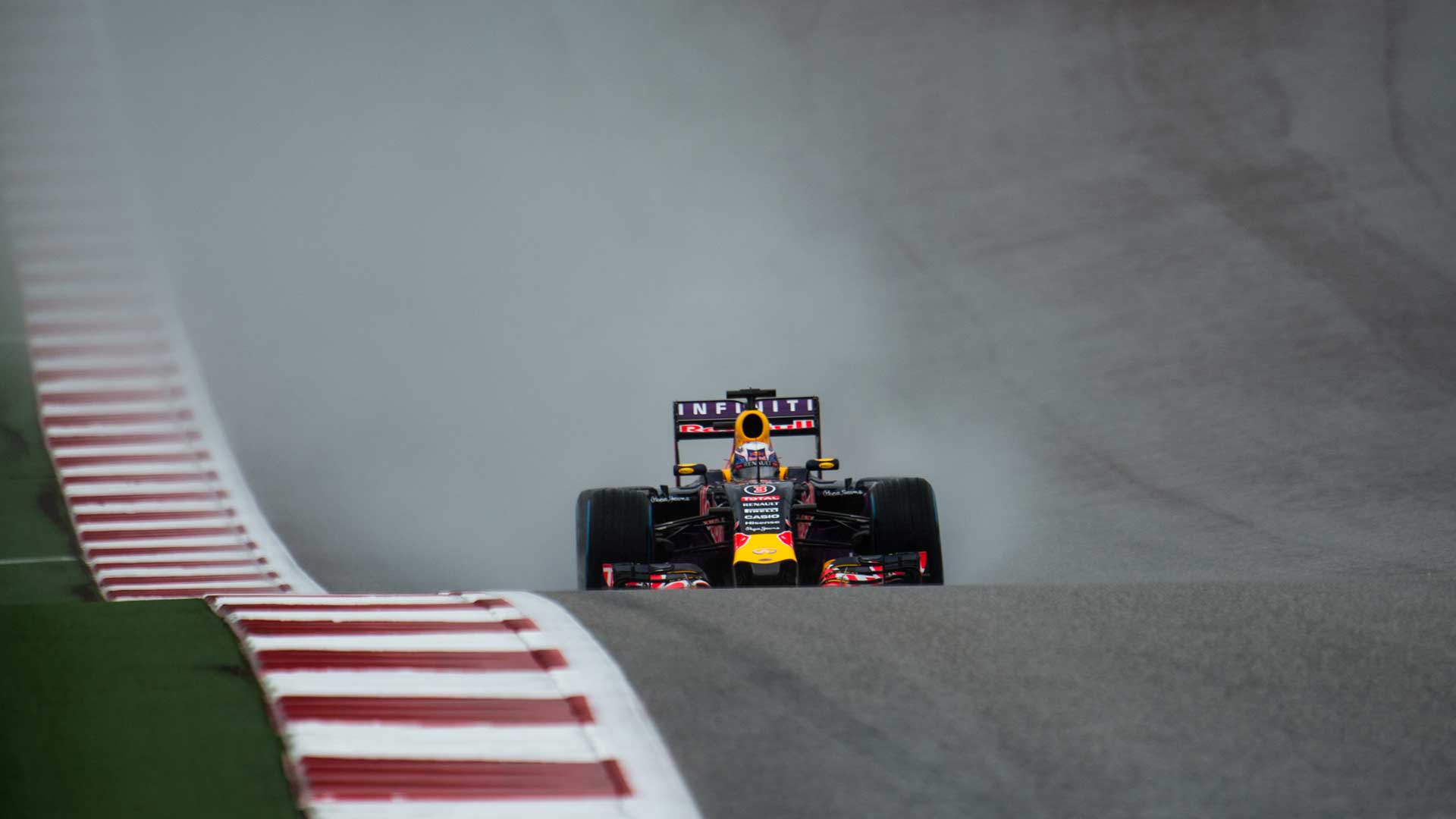 Daniel Ricciardo’s Renault-powered Red Bull was near the top of the timesheets during a wet practice 3. Standing on top of the Turn 1 photo tower, I resisted the high winds and driving rain to capture the Aussie climbing the steep hill to start his lap.Jamey Price 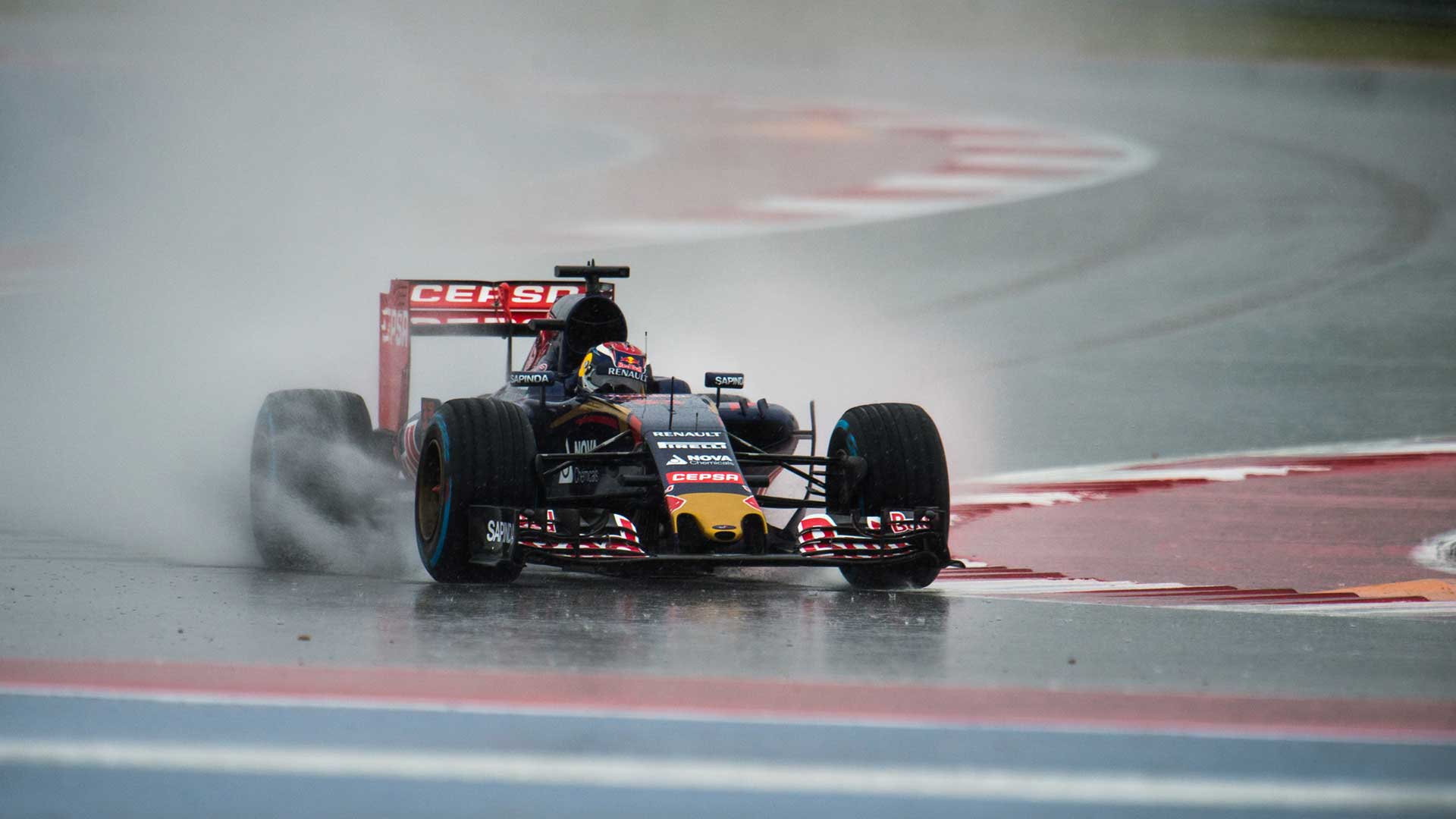 Red Bull’s development team Toro Rosso has two drivers who will certainly become big stars in the future. I have keenly followed 18-year-old Max Verstappen’s career. When everyone else was in the garages, the Dutch driver was pounding around in the torrential rain, his car control unbelievable in horrid conditions.Jamey Price 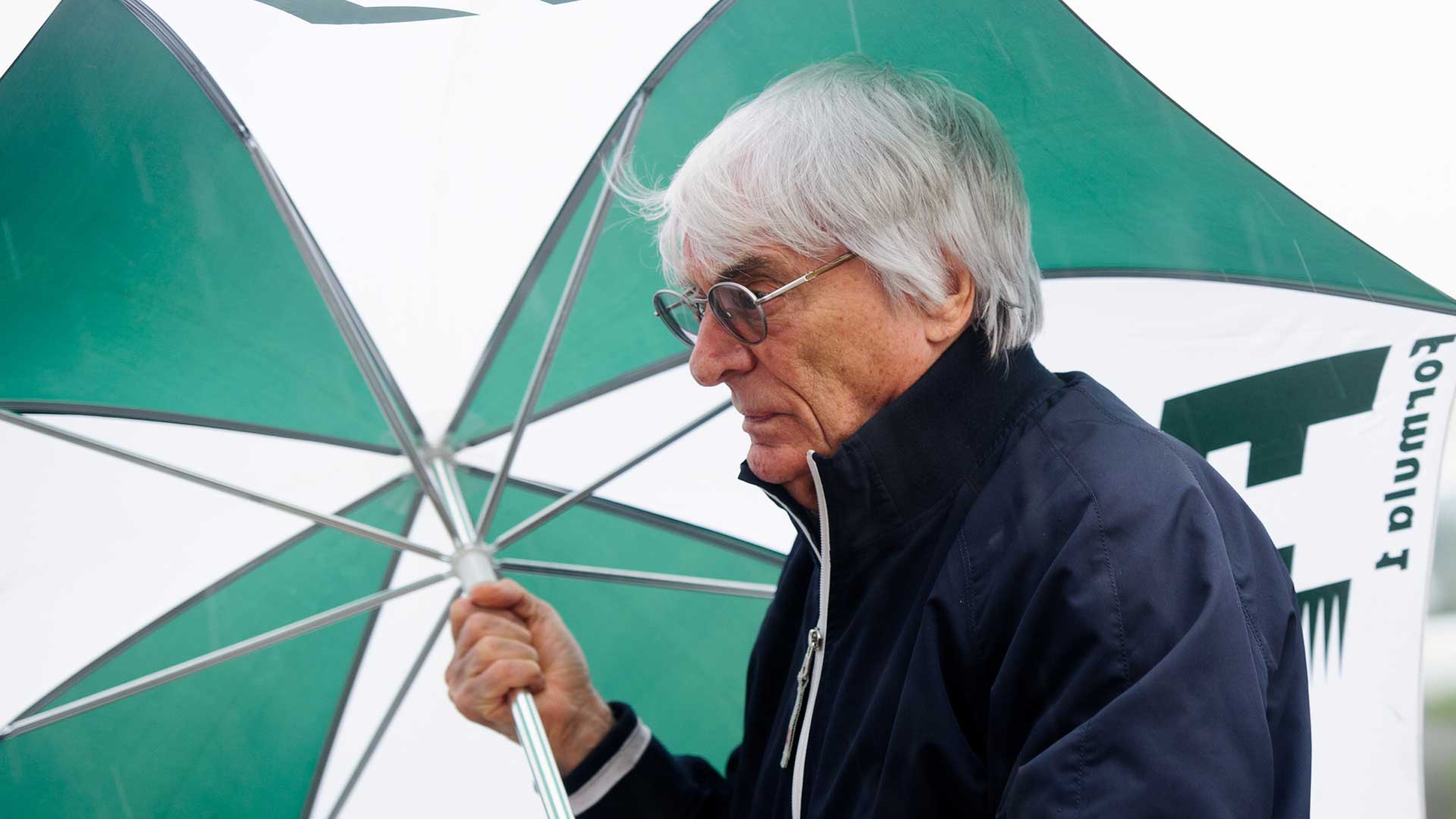 A reminder that the world’s most powerful men—in this case, the majority owner of Formula 1, Bernie Ecclestone—are not immune to the inconvenience of a hurricane-drenched F1 paddock.Jamey Price 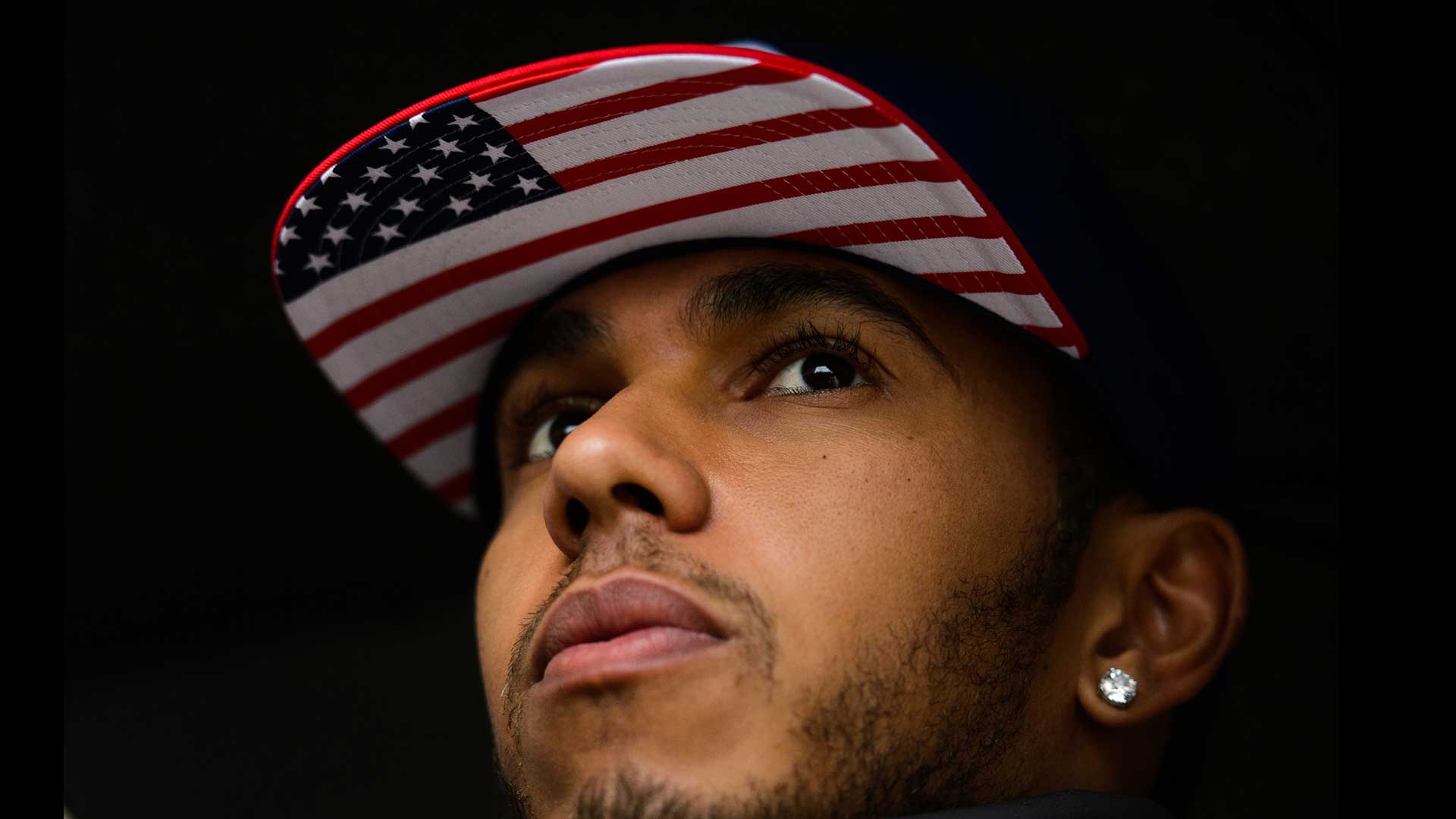 Mercedes-AMG’s Lewis Hamilton waits out the rain before qualifying on Saturday afternoon. The double world champion had the chance to clinch the driver’s title on Sunday, and could equal F1’s greatest names by becoming a triple world champion. His one-off Mercedes U.S. GP hat shows his love for the race’s host nation.Jamey Price 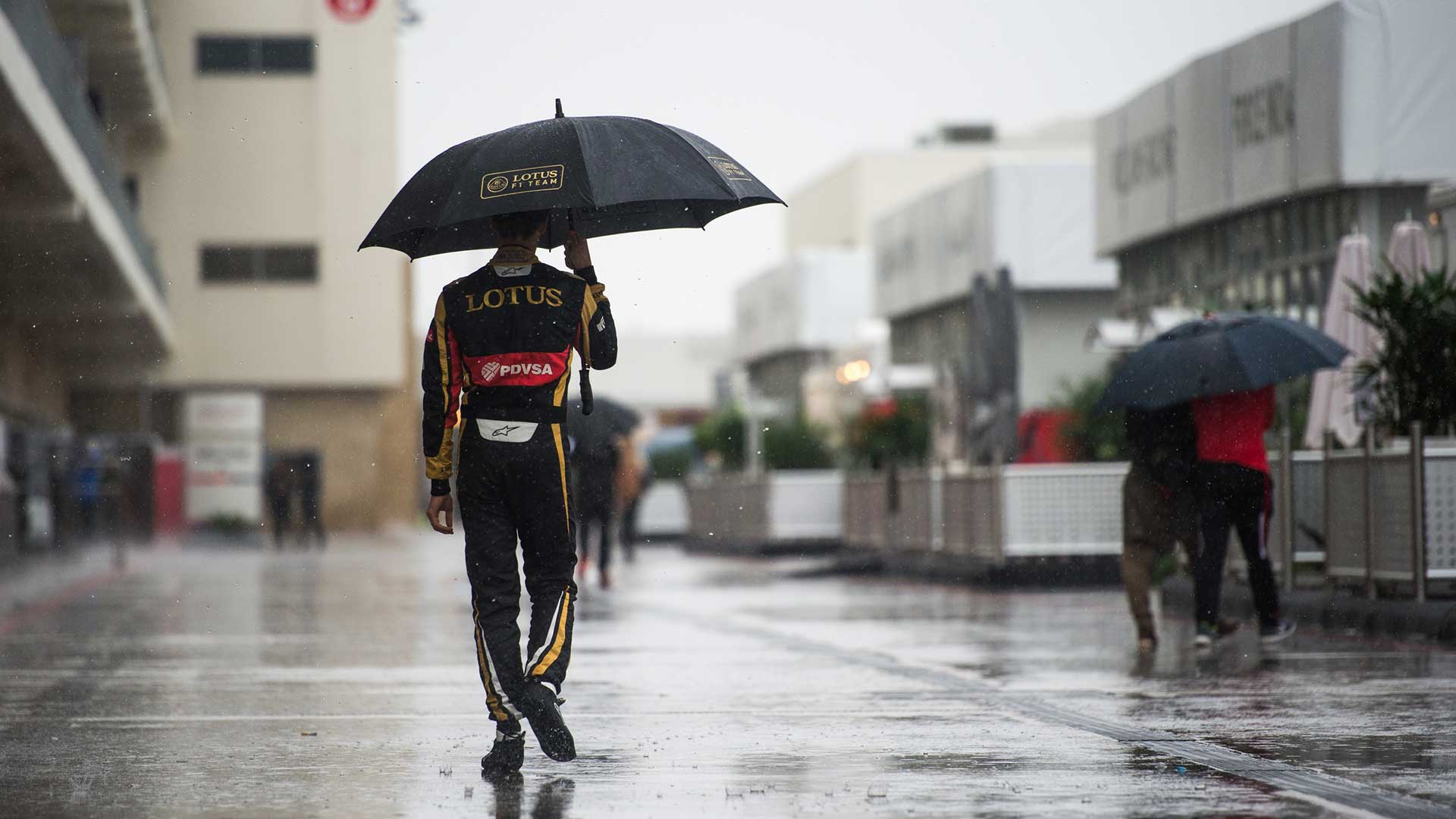 After qualifying was cancelled, Lotus Driver Romain Grosjean walks back to hospitality. The relentless rain became the story of the weekend. With one practice cancelled completely, and qualifying moved to a time slot on Sunday morning, everyone in the paddock was waterlogged and weary.Jamey Price 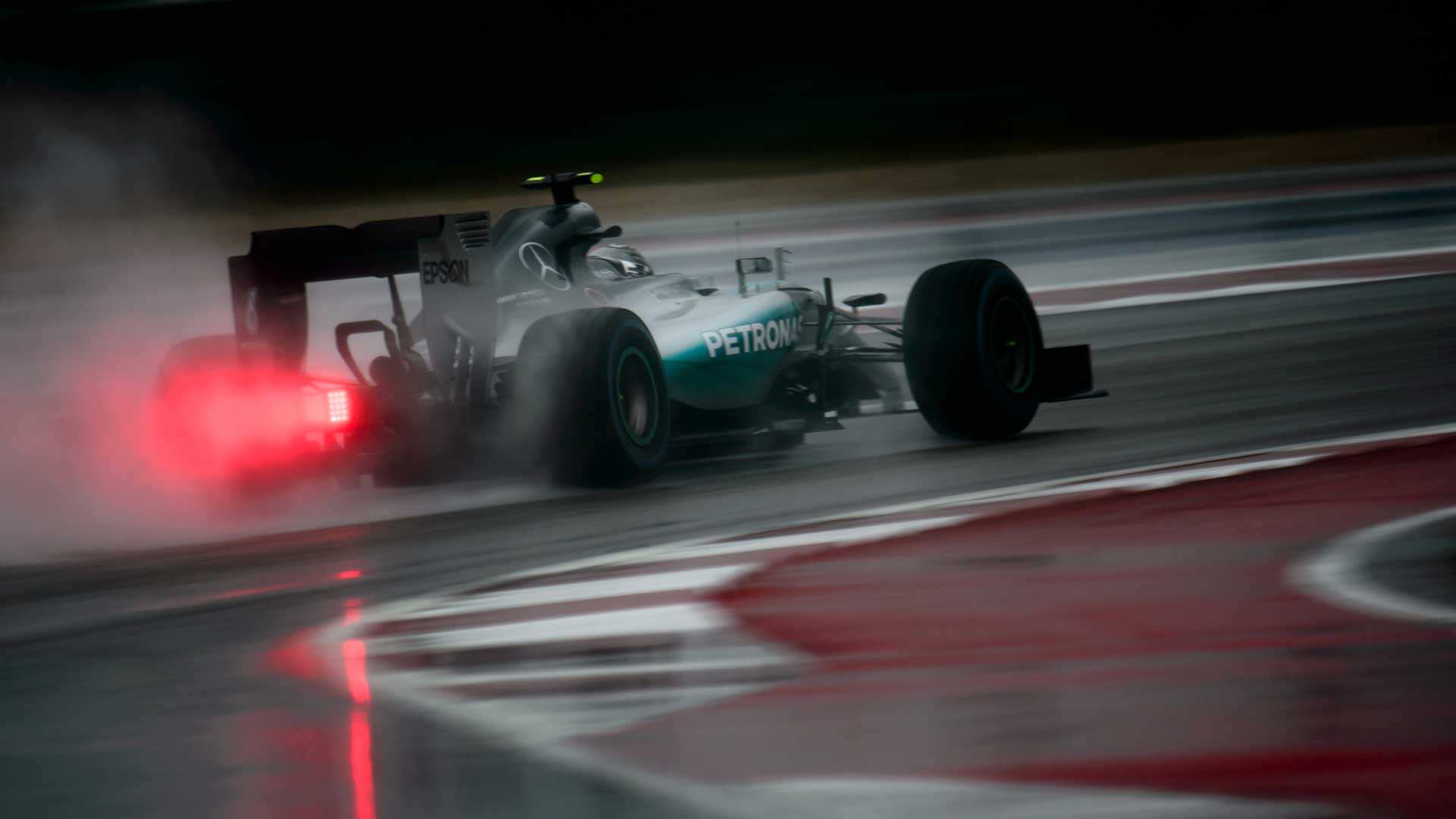 Despite lacking any title hope for 2015, Rosberg was flying in his Mercedes-AMG car during a rain-soaked qualifying session. It was dark, wet and cold. But everyone, including the photographers, did their jobs as best they could.Jamey Price 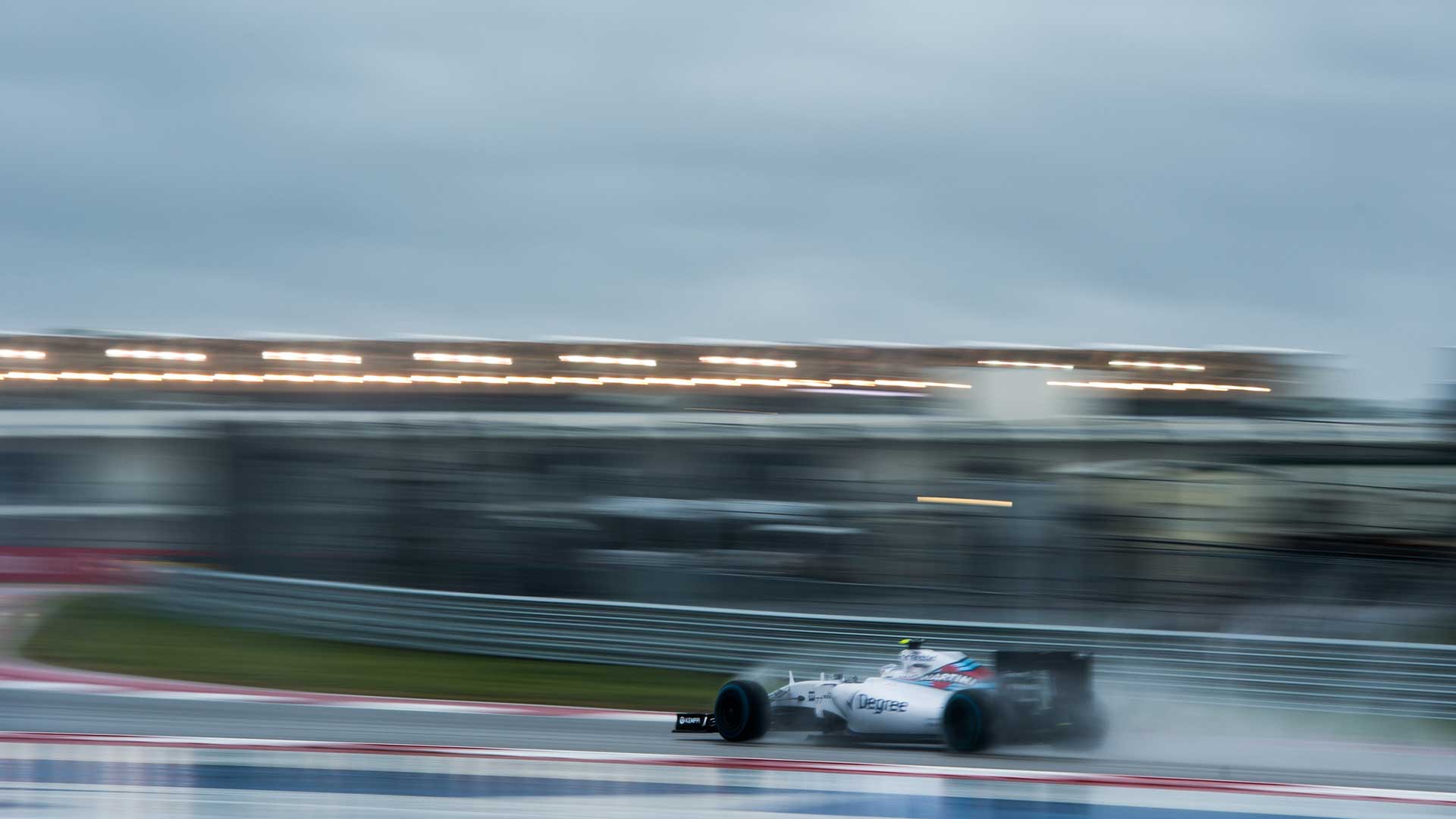 Valtteri Bottas tiptoed his Mercedes-powered Williams F1 car round the circuit’s fast right-hander, one of the defining features of CotA.Jamey Price 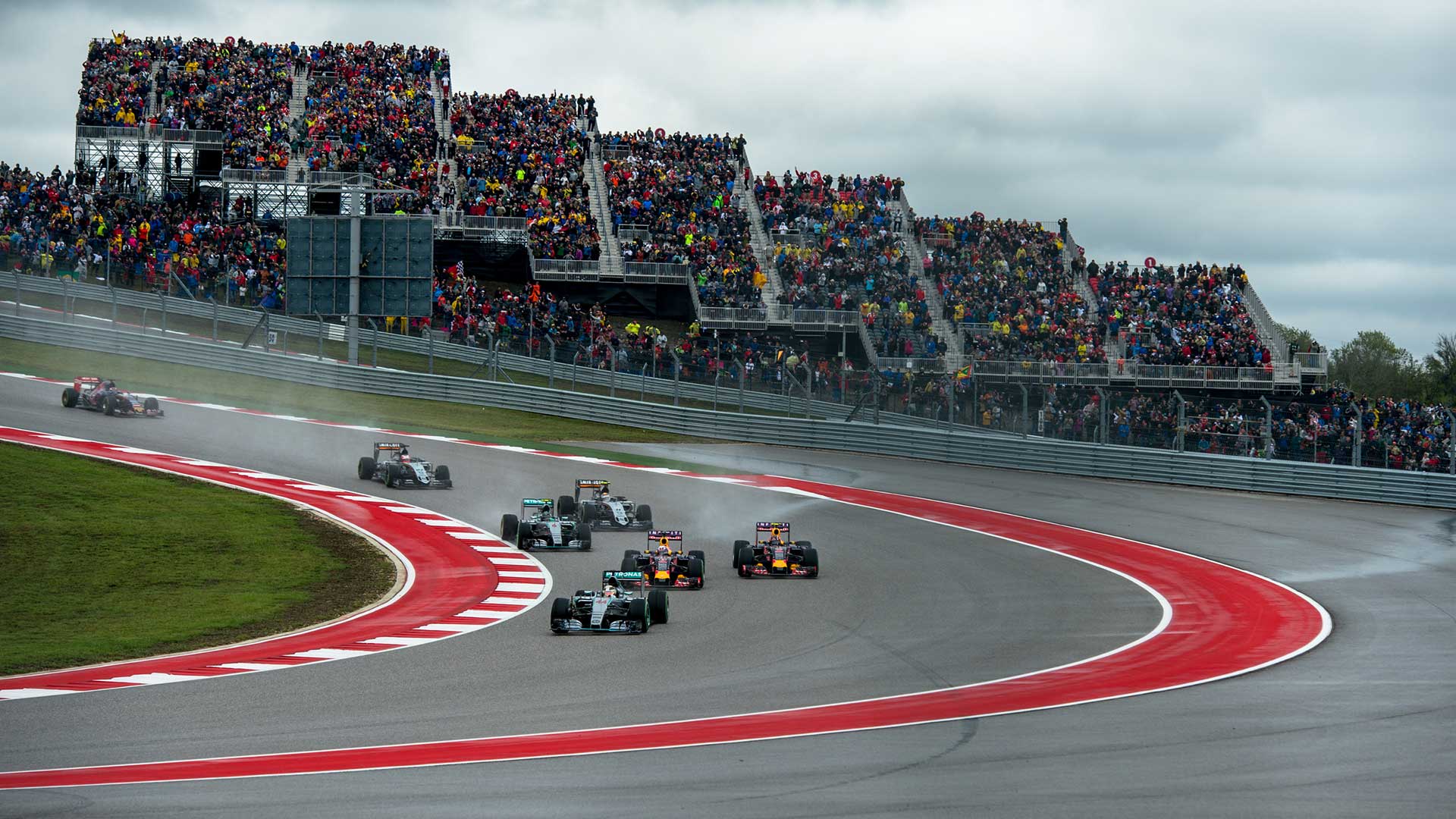 Green flag! Finally, with a break in the weather, the race got underway. It was by no means dry, mind. Lewis Hamilton made a Turn 1 move on teammate Rosberg, and took the lead down the hill with packed grandstands in the background.Jamey Price 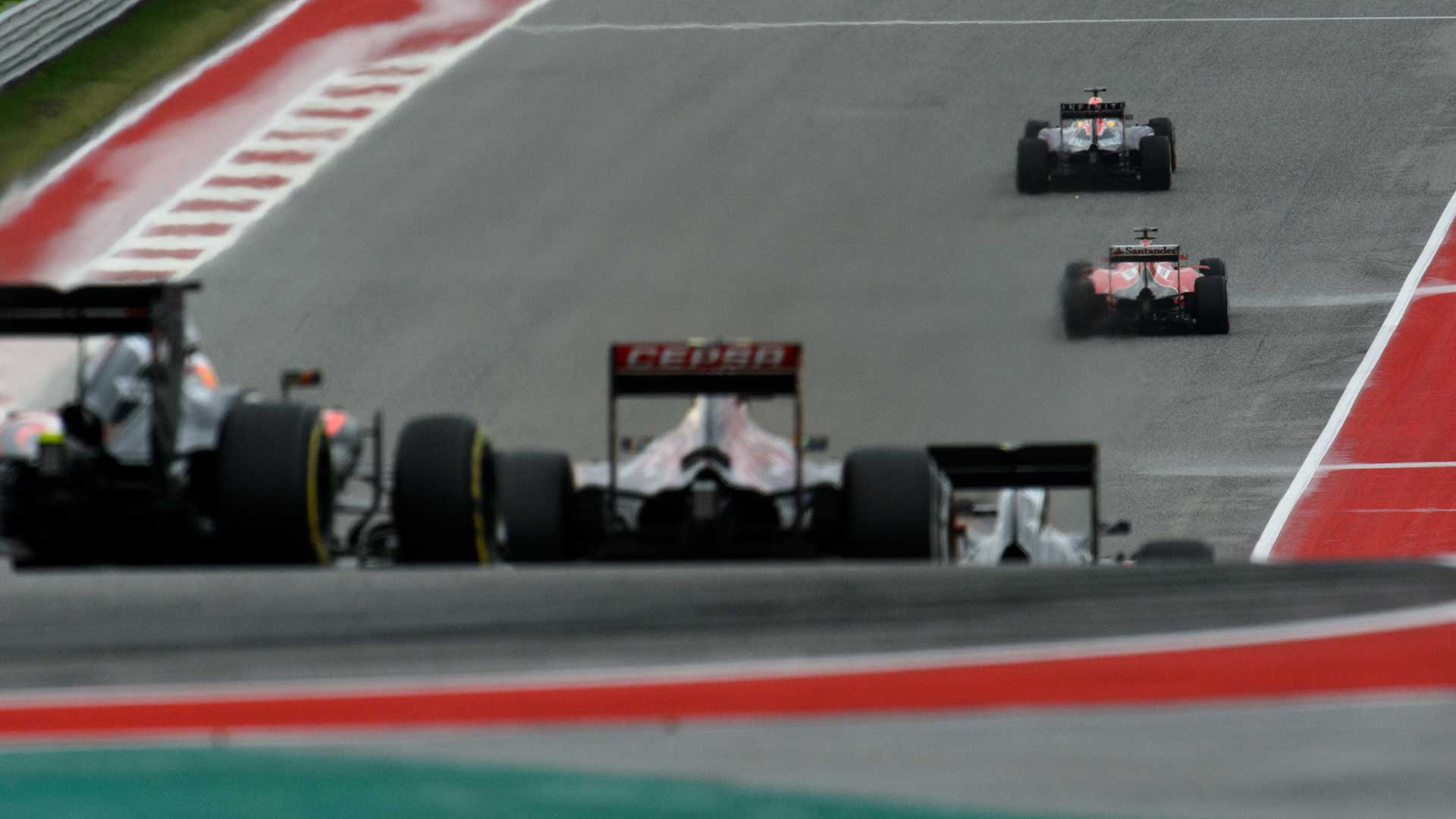 Racing action at CotA. The long back straight provides one of the best chances for overtaking on the circuit. The undulating nature makes for an interesting photo as well.Jamey Price 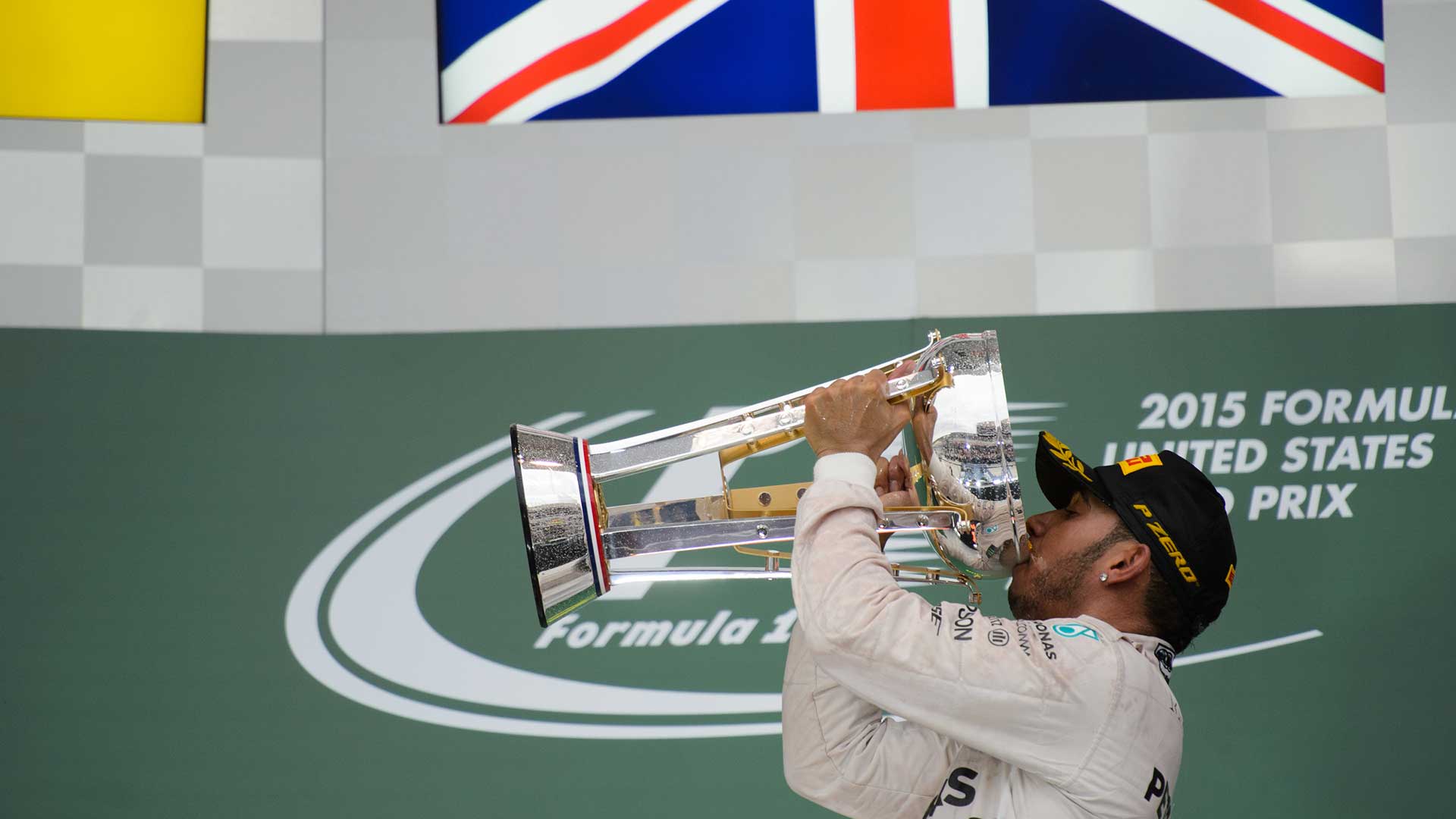 In the end, all the cards fell into place. Hamilton needed to win, and second-overall Seb Vettel to be second or worse to clinch the championship. Rosberg made a critical mistake, which allowed Hamilton to seize control with only a few laps remaining. Later, having filled his trophy with champagne, the champion took a big swig to savor the moment. It must’ve tasted terrible, as he quickly spat it out.Jamey Price 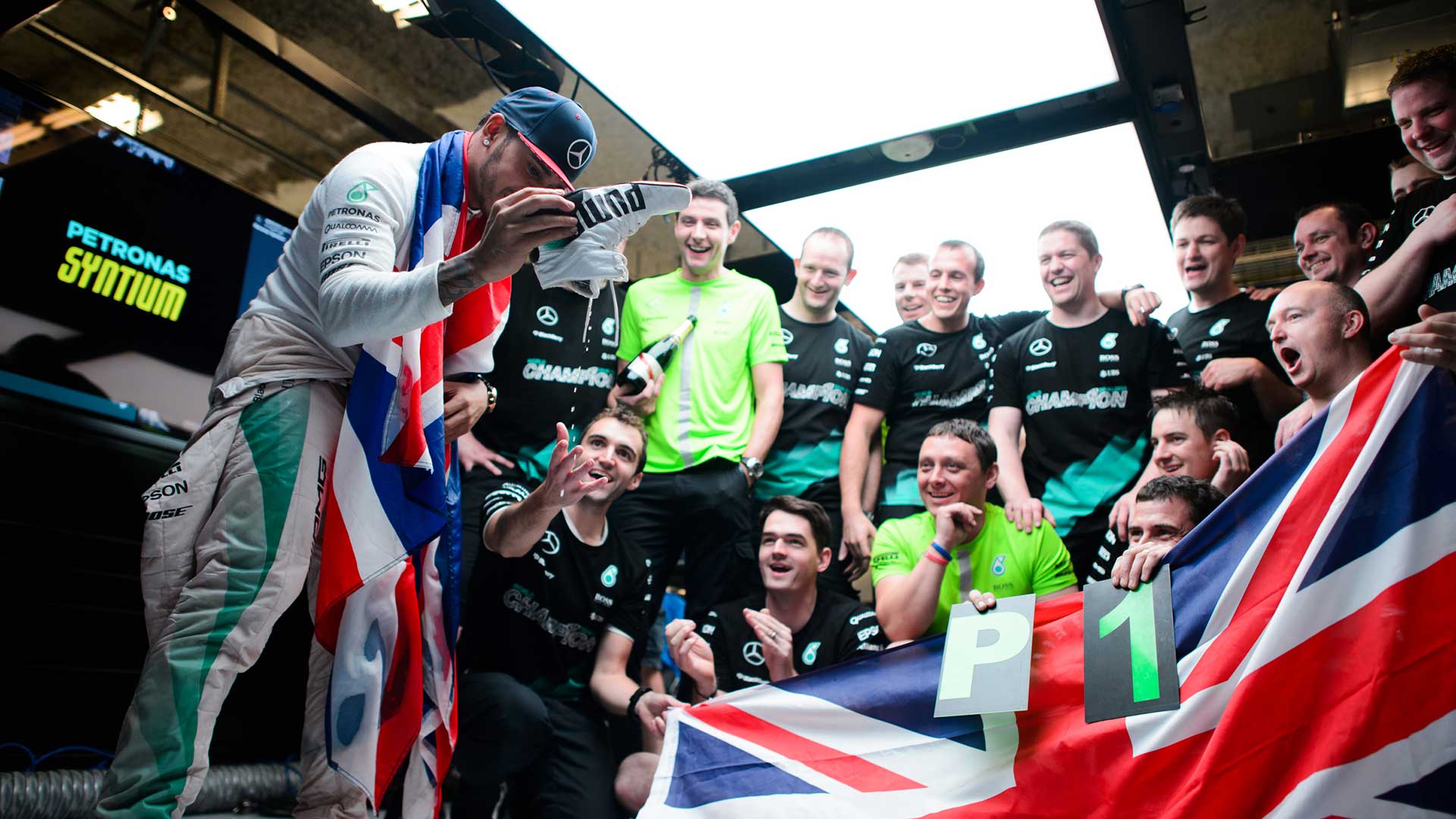 Much to the delight of his team, the newly crowned Lewis Hamilton empties his racing boot of champagne before taking a group photo with his Mercedes mechanics.Jamey Price
MORE TO READ