Eleven-Second Quarter Mile for $2,000? Must Be the GRM Challenge

We can’t guarantee a Miata Zamboni, but we’ve seen one there before. 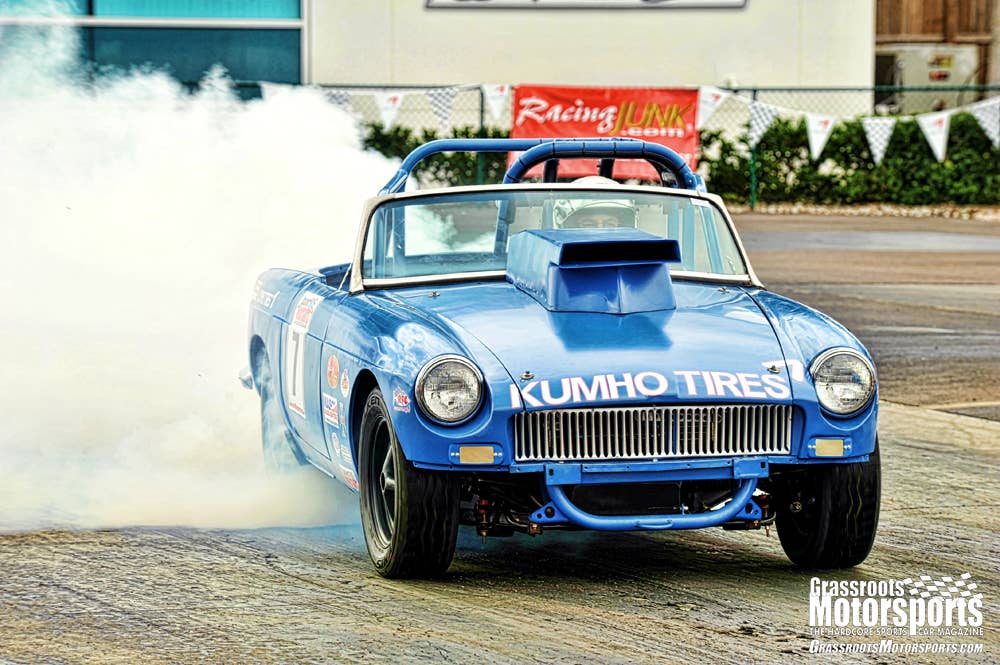 Next Friday and Saturday at Gainesville Raceway, the NHRA-owned drag strip in Florida, the most interesting automotive competition you never heard of takes place. In the neighborhood? Admission is free.

It’s the Grassroots Motorsports $2016 Challenge, an annual event which technically started in 1999, but in its current form dates back to 2001, with the $2001 Challenge.

The idea: Your budget is whatever year it is – $2001 for that first one. And within that budget, you have to field a vehicle that you will drag race, autocross, and show in a concours setting to be judged. Combine the three scores, and the winner, you know, wins.

As with the Chumpcar- and LeMons-type of endurance races that came (long) after the Challenge, you look at the field and think, “No way that came in under the budget.” But at some level of creative accounting, it did.

Example: Up to a certain dollar figure, you are able to recoup money by, according to the GRM rules: “Buy an engine for $100, use the heads on your Challenge car, then resell the rest of the engine for $80, you may recoup $80, assuming your build has not already hit the recoup limit.” The limit this year is $1,008, half the total budget.

There also seem to be a remarkable number of prime parts “laying around.” Otherwise, there’s some ambitious junkyard-scouring, eBay-chasing, and general horse trading, in at least one case involving an actual horse.

Plenty, perhaps most, of the cars are junk, but a startling number are, well, startling. Like the 1984 Chevrolet Corvette “sucker” car built by a team of engineers: They took a sad old C4 Corvette, fashioned a semi-flexible skirt around the bottom, and mounted a gas-powered snowmobile engine where the passenger seat was.

It was attached to a fan that worked like a vacuum cleaner, and “sucked” the car to the ground, less delicately but just as effectively as Jim Hall’s Chaparral 2J CanAm car. It allowed the Corvette to tour the autocross track at nearly full throttle, spewing sand and gravel out the top, causing corner workers to run for their lives.

And there was the year that David Wallens, editor of the Grassroots Motorsports magazine that started it all, tossed in, without thinking, a line in the rules that prohibited Zambonis. So, of course, a vintage, running Zamboni shows up, which is remarkable in itself, but far more remarkable is that it was actually powered by a Miata underneath, essentially shedding the Zamboni like a turtle shell.

Consistently, some of the most amazing cars have come from drag racer Andrew Nelson and his family. Nelson first showed up with a butt-ugly four-door Chevrolet Nova, maybe a 1974 model, which did poorly on the autocross, even worse in the concours. But then Nelson lit it up on the drag strip, making a sub-11-second run, something a 707-horsepower Dodge Challenger Hellcat can’t manage, and Nelson’s Nova happened more than 10 years ago.

Since then, Nelson has been back with cars that are always fast in the quarter-mile, but began scoring higher and higher in the autocross and concours. In 2015, he won the whole thing. With a Volkswagen Beetle. V8.

I was one of the four or five concours judges for a decade or so, until a closed online discussion got testy, and then personal, as more than one competitor insisted I scored the concours in favor of my friends, and against them, though I didn’t know who my “friends” were, and wouldn’t know “them” if they walked through the door right now. Eventually it emerged that some contestants who were really good at drag racing and autocrossing, but maybe thought “matte finish black” and “flat black primer” were the same thing, resented the concours part altogether, at which point I uninvited myself, and now just read about it in the magazine.

But I can tell you that some of the hardware we saw is rivaled only in motorsports by the vehicles you see at the Bonneville Salt Flats, where some grandpaw shows up with a truck he built in his barn with a tugboat motor that goes a zillion miles an hour. One year, for instance, we were inundated by Mazda RX-7s, first and second generation. I think it was the fifth one that I lifted the hood and yelled to the other judges: “Hey! This one has a rotary!” At least a half-dozen that year had Ford or Chevy V8s, and at least one Ford 2.3-liter turbo four-cylinder.

Some years, entries hit close to 100, but now are more in the manageable range of 50 or so. There are also actual sponsors now: General Tire, CRC and Miller Electric. This year’s entry list includes a Fiat X1/9, Merkur XR4Ti, a Buick Roadmaster, a Toyota Tercel, a BMW 2800CS, a Triumph Stag, a Ford F350 Crew Cab, and as always, a bunch of Miatas, and some Chevrolet Camaros and Ford Mustangs. And multiple minivans.