The Meyer Shank Acura took the overall win at Daytona after a raging GTD Pro class battle spun off track right in front of it. 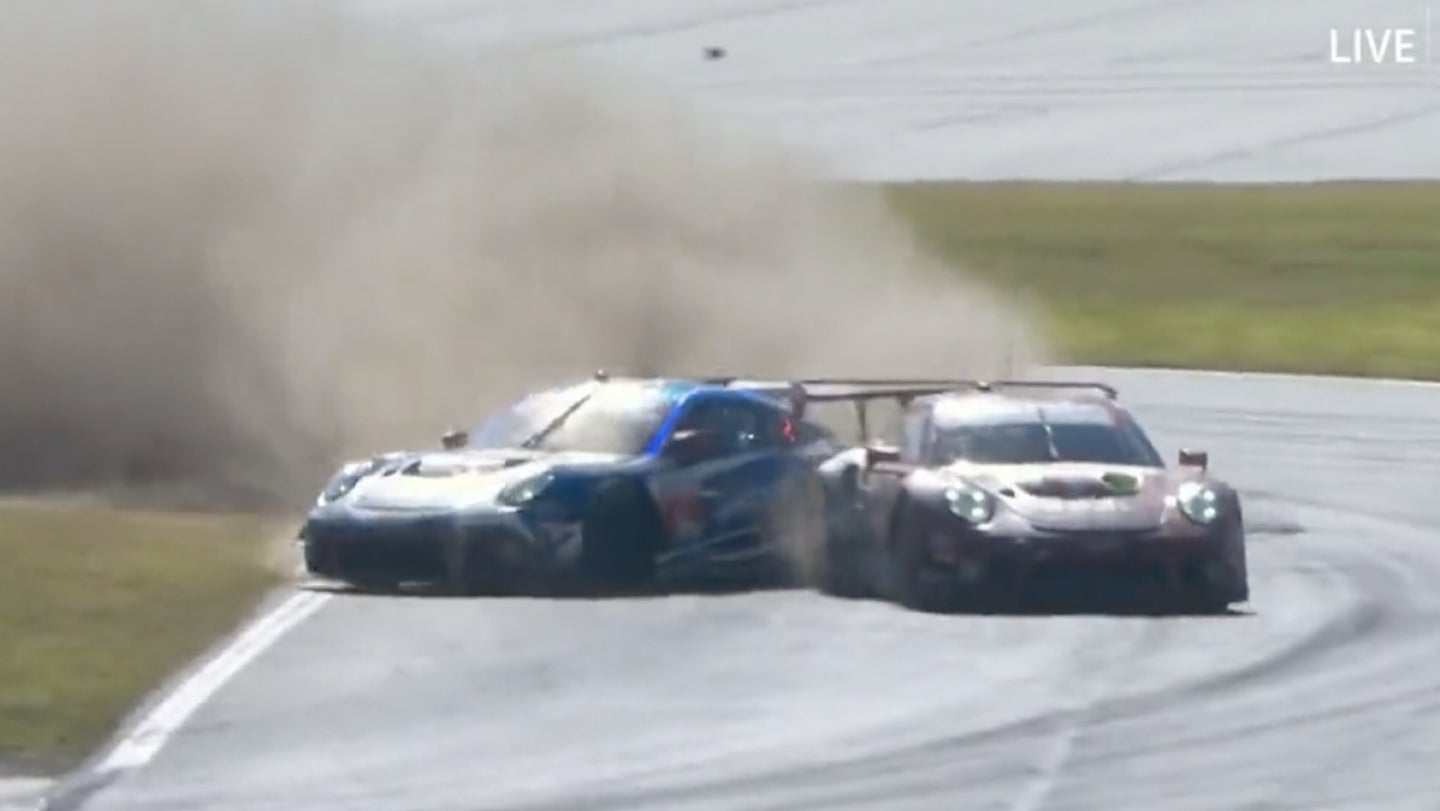 If there's one thing the 24 Hours of Daytona is great for, it's delivering some wild action in the last moments of the race. This year, we had an an all-out war between two Porsche 911 GT3Rs for the GTD Pro class win that ended with a spin right in front of the overall race-winning Acura.

It looked like the GTD Pro class was set for a Porsche 1-2 finish right before the last hour of the race, with Mathieu Jaminet in the No. 9 Pfaff Motorsports Porsche leading Laurens Vanthoor in the No. 2 KCMG Porsche. Of course, no one wants to finish second when the first-place car is right in front of them, so this battle got extra spicy.

A lengthy full-course yellow in the last hour bunched the field back up, ensuring maximum drama when the race went back to green. The Porsche battle just got closer and closer from there, with a bump-filled swap of the class lead with less than five minutes to go. The No. 9 car dropped two wheels off track as Vanthoor tried to maintain his lead, but the No. 2 was firmly on the pavement and snuck on by.

That still didn't get the No. 2 out of the No. 9's bumpin' range, as these two 911 GT3Rs were the perfect match for each other, like watching the highest-level of spec racing break out in the middle of a multi-class endurance race. The lead swapped back to Jaminet with a relatively clean pass at the start of the last lap, but even then, you knew it was going to be close.

On the very last lap of the race, all that Porsche-on-Porsche aggression finally came to a head. Vanthoor and Jaminet got side-by-side again, this time with Vanthoor on the inside of the turn. Both cars cut into the dirt this time, with Vanthoor's No. 2 going full off-road and spinning mid-track, and Jaminet recovering to speed off for the lead—and at the end of the lap, the GTD Pro-class win.

The No. 62 Risi Competizione Ferrari passed the No. 2 Porsche in the madness, killing Porsche fans' hopes of a 1-2 win. Vanthoor's No. 2 KCMG Porsche took third in its class, so that team at least got a podium finish for their efforts.

There was one more reason why fans were breathless when this big Porsche wipeout happened. Cutting through the dust cloud was the overall race leader, the No. 60 Acura ARX-05 DPi of Meyer Shank Racing, driven by Helio Castroneves. The No. 60 drove through it to take the overall win, but had that wipeout been just a tad further back towards Castroneves' prototype, we might have seen another class result shaken up on the final lap.

Helio and his team climbing the fence to greet fans after his win is a moment so wholesome that I'm glad the race played out as it did, though. This is the second year in a row Castroneves has won the Rolex 24 overall after he won last year with Wayne Taylor Racing. Castroneves is also the defending Indy 500 champ, so we'll have to wait to see if he follows up that win with another later this year.

You can find the full race results for every class here.

Acura, Wayne Taylor Racing on Pole for This Weekend’s Rolex 24 at Daytona

Come Sunday, Acura will be starting the famous endurance race on the right foot.