The 10-hour endurance race was heated throughout but came down to the final minute as the frontrunner ran out of fuel with two turns to go. 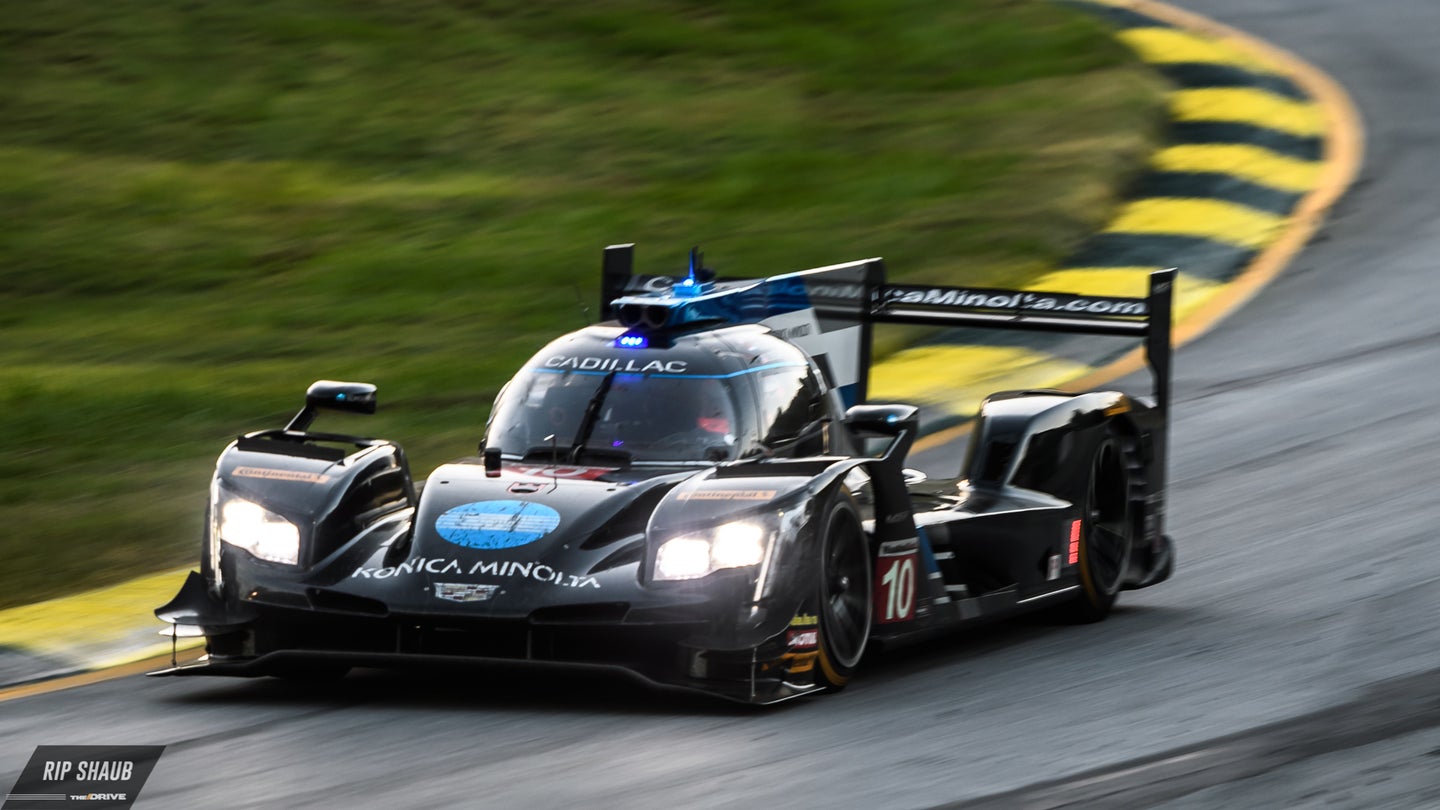 Saturday's 21st annual Petit Le Mans at Road Atlanta provided the thrilling antics we've come to expect from the race but even then, no one could've predicted the outcome as each class win was decided in the closing moments of the 10-hour enduro. In all, it was the trio of Ryan Hunter-Reay, Jordan Taylor, and Renger van der Zande who took the overall victory in their Wayne Taylor Racing Cadillac, passing the No. 5 Mustang Sampling car as it heartbreakingly exited the track with two turns to go after miscalculating its strategy and running out of fuel.

Many of the expected frontrunners faced trouble early on in the Prototype class, some making mistakes that they were able to recover from while others were forced to retire without a shot at making good on their winning intentions.

Polesitter Pipo Derani was showing impressive pace but just 26 minutes into the contest, his No. 22 Tequila Patron ESM DPi suffered a painstaking rear left puncture. He was able to limp it back to the pits, but the team's woes weren't over as the No. 2 sister entry faced a hub problem on the front left, resulting in more lost time for the crew who won Petit in 2017. Acura Team Penske's No. 6 ARX-05 was the biggest shock as driver Juan Pablo Montoya offed the car before the downhill esses, causing significant body and rear damage. The car was retired before the end of Hour 2 as a result.

Meanwhile, both Team Action Express Racing Cadillacs were mixing it up and the No. 31 Whelen Engineering crew was demonstrating the performance it needed to clinch the overall Prototype championship. Challengers CORE autosport in the No. 54 Oreca 07 Gibson fell two laps down but stellar fuel saving and a heroic stint from driver Colin Braun put them back in the conversation. 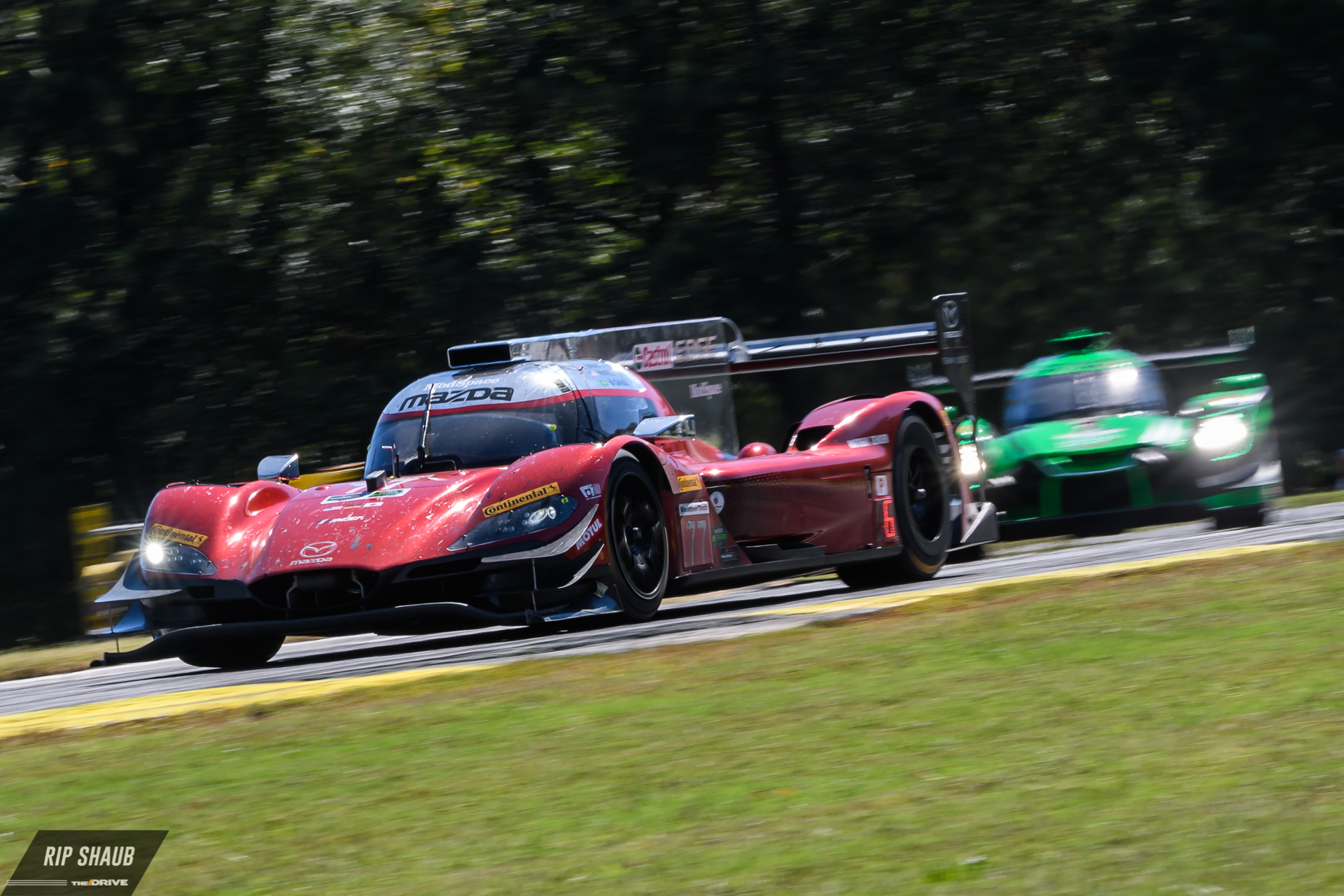 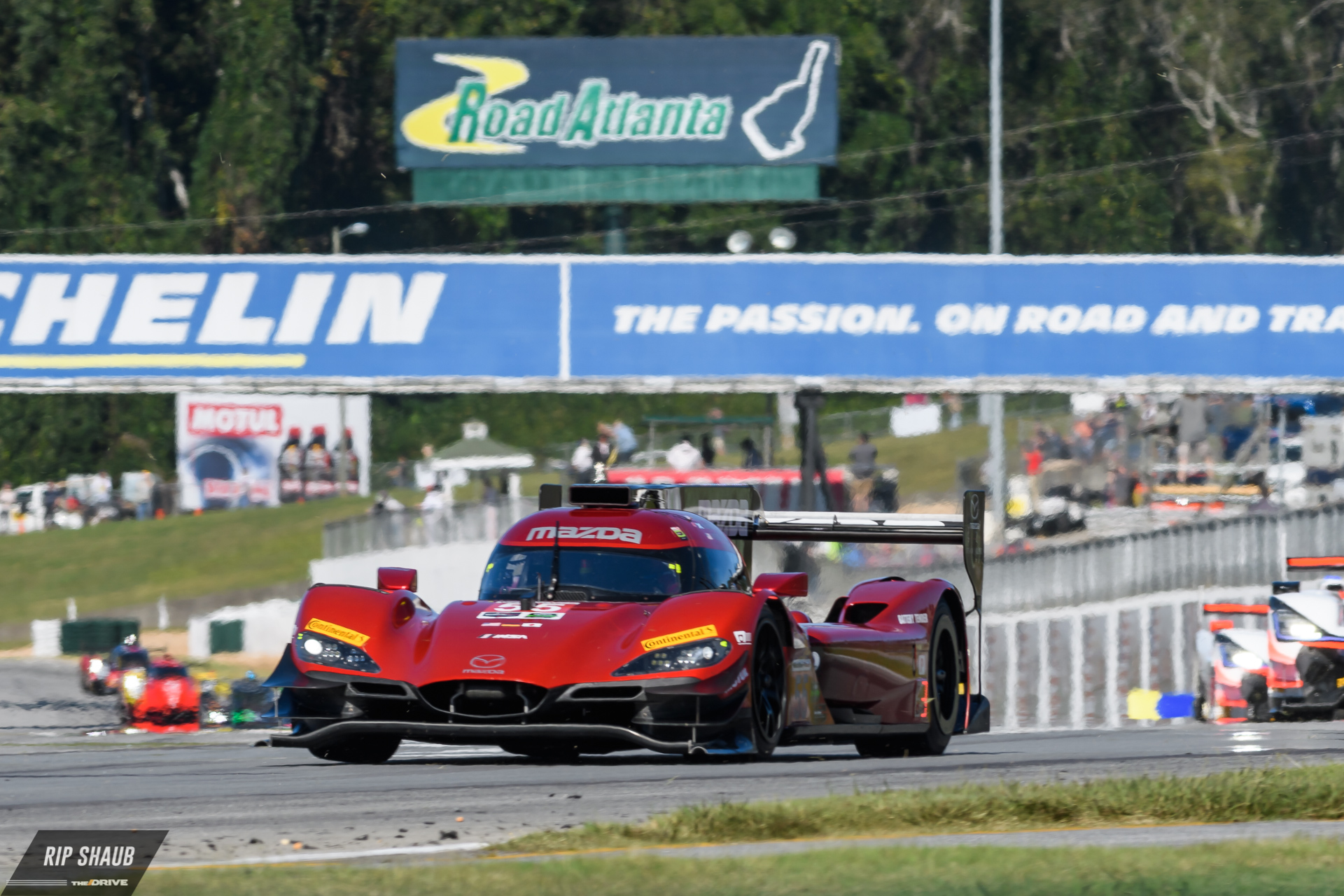 Mazda Team Joest was making good on its two-three qualifying result and transferred that speed over to Saturday's race. The No. 77 RT24-P ran without much issue while the No. 55 suffered contact with another car and had to retreat to the pits for repairs. The Multimatic-built DPi was treated to a new nose and rear bodywork but fell off the lead lap in the process, eventually regaining it in the seventh hour. The two cars would eventually score a double podium with the No. 77 finishing ahead of the No. 55 by just two seconds.

“I am super happy to have been a part of this race with Mazda, my first IMSA race, and to have been with them to achieve the best result of the year for Mazda with Oliver and Tristan," said third driver Lucas Di Grassi on the finish. "I’m super proud of the team, they did an amazing job. We all fought very hard, for ten hours, to have a good race on a very difficult track. With a double podium, I think we did the job. It’s an unbelievable success. So, I’m super proud of everyone—the team, the car, the mechanics and my fellow drivers.”

Moving forward to the finish, Wayne Taylor Racing was eagerly hunting Filipe Albuquerque in his No. 5 Mustang Sampling Caddy who had undercut the field and pitted early for fuel. The move appeared as if it would pay off but odds and a heavy foot worked against Team AXR, relinquishing the car to the side of the track as it resultantly fell from grace and the podium.

"It was a never-give-up strategy today. It was 10 hours and one of the toughest Petit Le Mans races there's been in a long time, especially in the Prototype class," Jordan Taylor exclaimed. "...We were making up positions on every pit stop, which kept us up front for track position. And for the last two hours, Renger was saving fuel. If we wouldn't have stuck to that strategy like we did, we would've ended up like the 5 car. We were pushing him every lap to save fuel and hit his numbers, and he was still able to keep the pressure on and it worked, passing for the win with two corners to go. To go through 10 hours of racing is unbelievable."

Team AXR did receive some comfort as the No. 31 Whelen Engineering Cadillac took home the season championship thanks to a P8 result.

Porsche Closes 2018 on a High Note in GTLM

Going into the race at Road Atlanta, focus was on Corvette Racing's No. 3 C7.R and the No. 67 Chip Ganassi Ford GT. The two battled against each other for season-long glory, them being the only remaining entries who had a shot at the GT Le Mans class championship. While this duel created its fair share of drama, yet again late in the race, it was Porsche's No. 911 RSR that claimed victory at race's end.

Antonio Garcia was making up ground in the first hour behind the wheel of his No. 3 'Vette, overtaking polesitter John Edwards in the No. 24 BMW M8 GTE. The No. 4 C7.R also picked up a few places early on and would work to support its stablemate in pursuit of the title.

This tandem offensive strategy would be put to work and was complemented by the crew's pit efficiency which helped keep their position on multiple occasions. A positive result was looking likely for the No. 3 but as dusk fell, so did the crew's momentum when the frontrunning Corvette spun off-course going up the hill after Turn 1.

"It probably went from one of my best races of my career to the most embarrassing moment of my career," Garcia lamented.

Despite that, the No. 67 Ford would not finish far enough ahead of the Corvette Racing team to commandeer the championship. The Ganassi car would conclusively find itself in P5, three places clear of the No. 3 'Vette but still in second place for the title.

“I thought that was the end of it," Garcia continued. "But the team did a fantastic job repairing the car and then all I could do was pass the Ferrari for eighth place, hope for some yellows and trust the guys in the No. 4 car to put pressure on the No. 67.  That’s exactly what they did. It was a classic case of Corvette teamwork.”

Patrick Pilet, who was accompanied by Nick Tandy and Fred Mackowiecki in the No. 911 Porsche, was elated to have taken the GTLM victory after he once thought it impossible.

“We stole the race. We knew we had a good car but we didn’t expect that,” Pilet confessed. 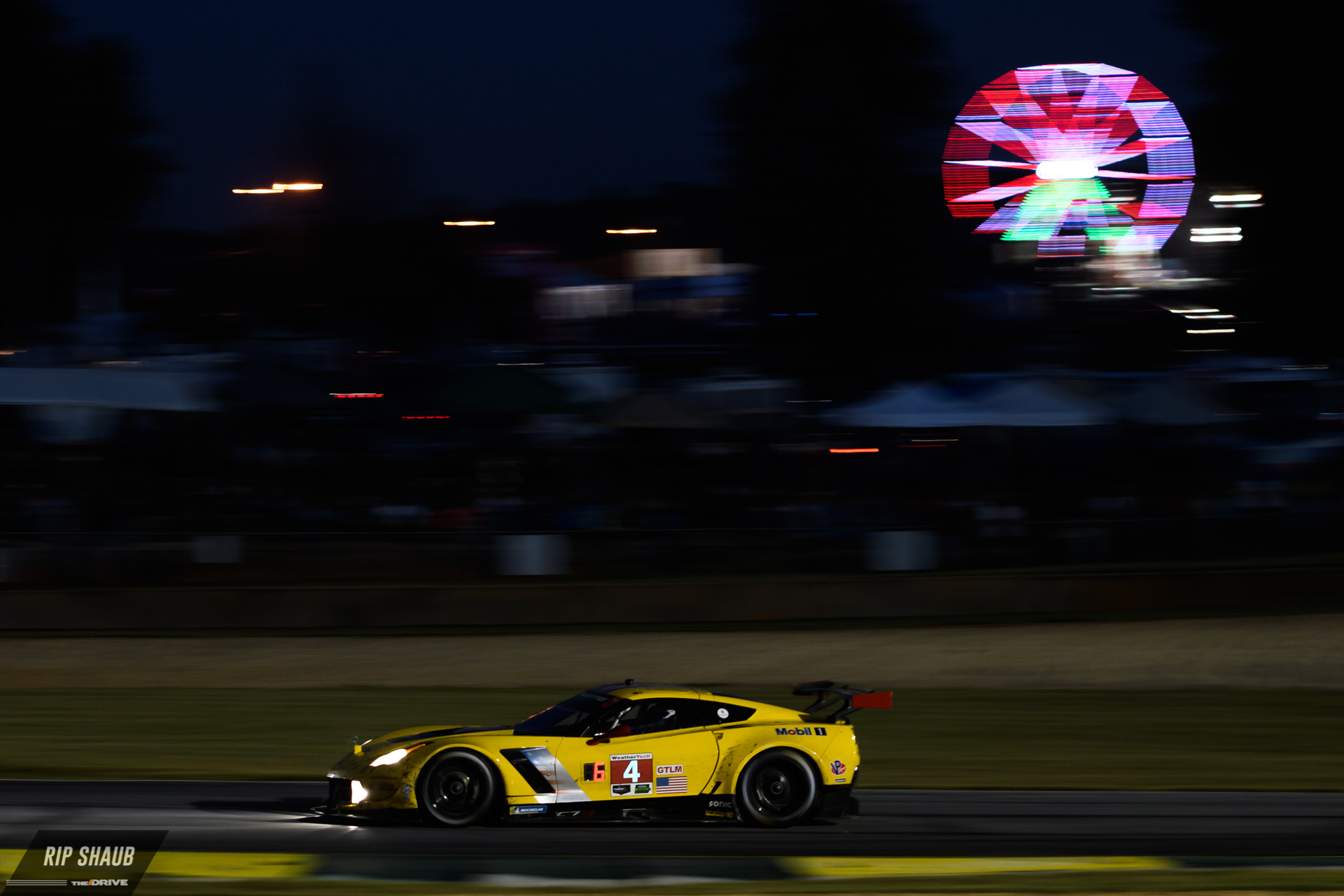 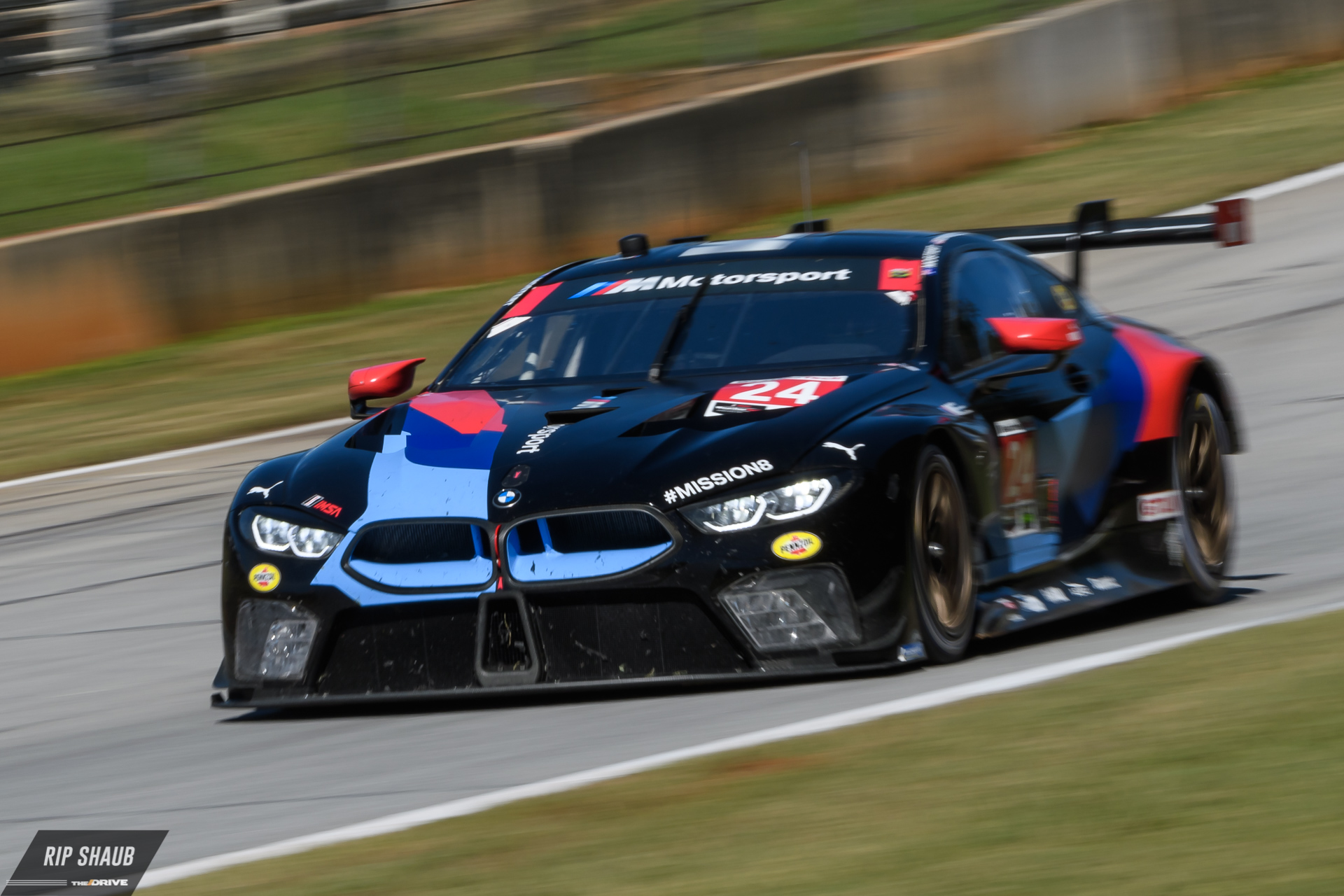 Corvette Racing's No 4 team joined Porsche on the podium, as did BMW Team RLL's No. 24 car piloted by John Edwares, Jesse Krohn, and Chaz Mostert.

In a race that was largely anticipated to lock in on Meyer Shank Racing and PMR, Scuderia Corsa gained its own notoriety by winning the GT Daytona class from pole. 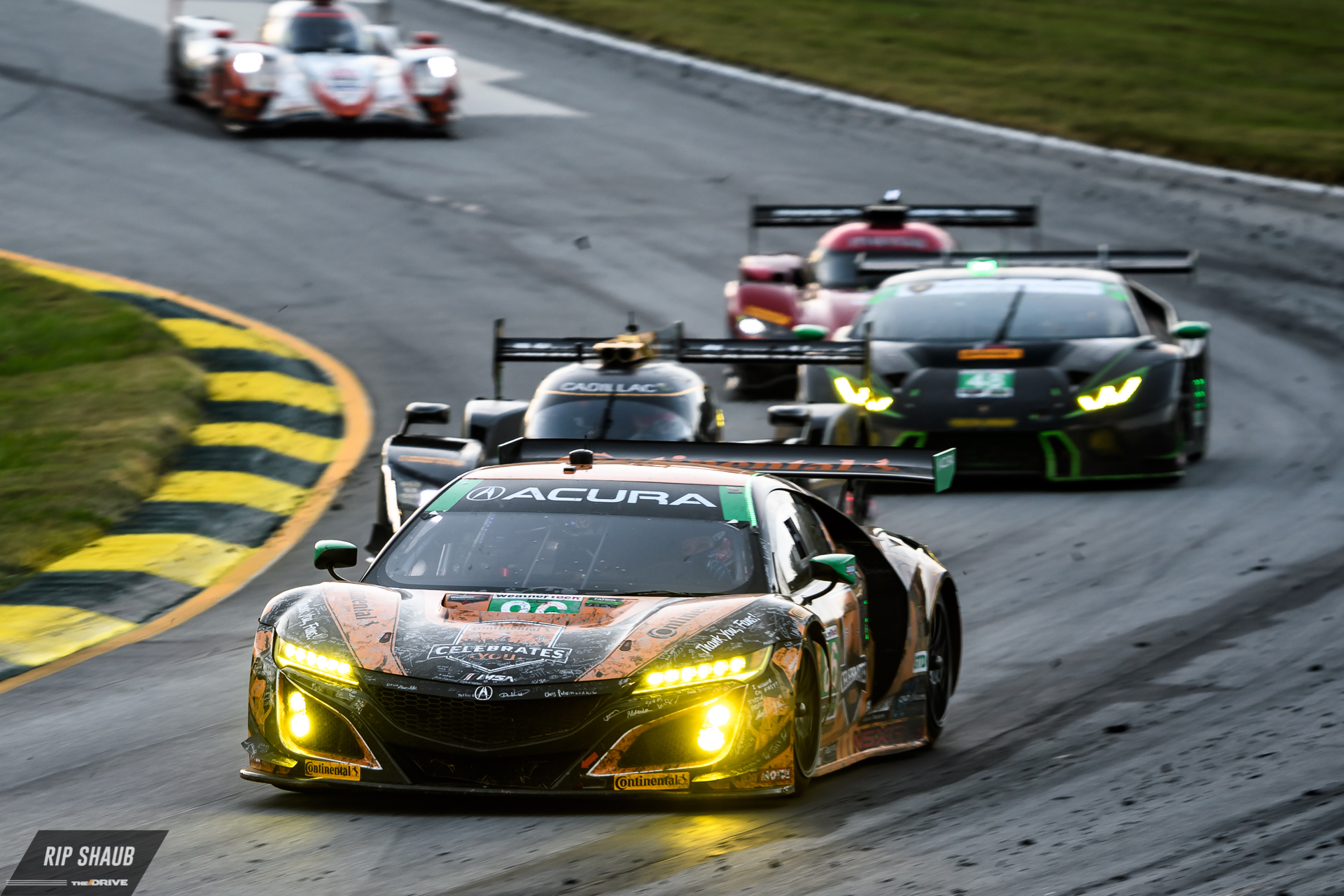 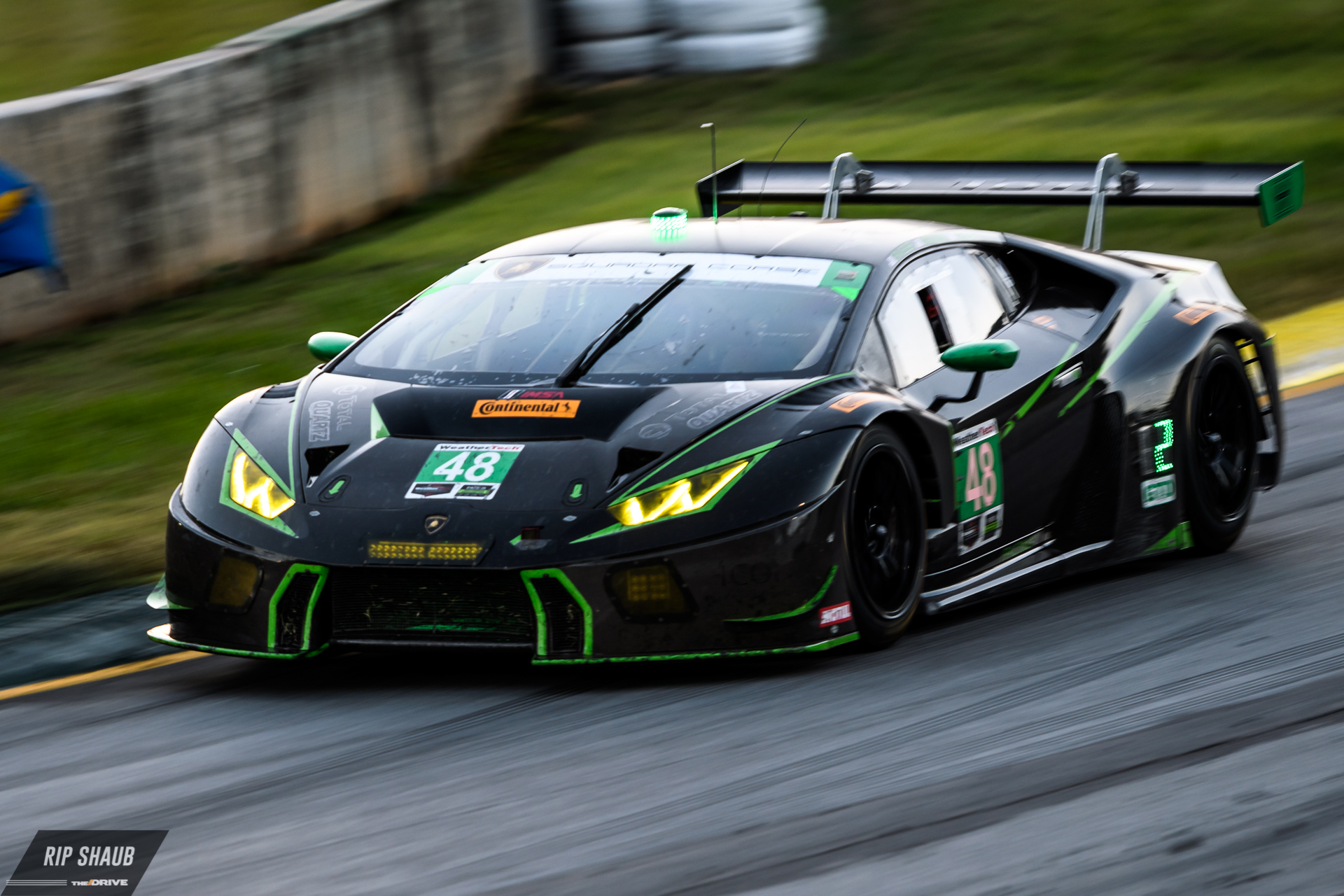 The action peaked in the final 90 minutes when the top-three competitors were separated by less than two seconds. A full-course yellow bunched them together and each was gunning for victory, two of the teams vying for bragging rights and the GTD championship. Paul Miller Racing's Bryan Sellers ran in first up until the final pit stop with 53 minutes remaining, relinquishing the lead and forcing a decision from MSR. The Acura-running team opted to place driver Alvaro Parente in control but he was held up at the end of pit row behind the No. 4 Corvette, burning through seconds of essential track time.

Parente seemed unphased, however, as he thundered past the No. 48 PMR Lamborghini Huracan and vyed to challenge Scuderia Corsa's No. 63 Ferrari 488 GT3. His teammate's championship hopes in the balance, Parente worked until the checkered flag to catch up but ultimately could not, resulting in a race win for Cooper Macneil, Gunnar Jeannette, and Daniel Serra—plus a title victory for Paul Miller Racing.

“I’m very, very happy—his is the first time I’ve finished Petit, and my first win,” Serra said. “The team did a great job, a perfect 10 hours. It was perfectly executed, perfect pit stops and no mistakes on the track.” 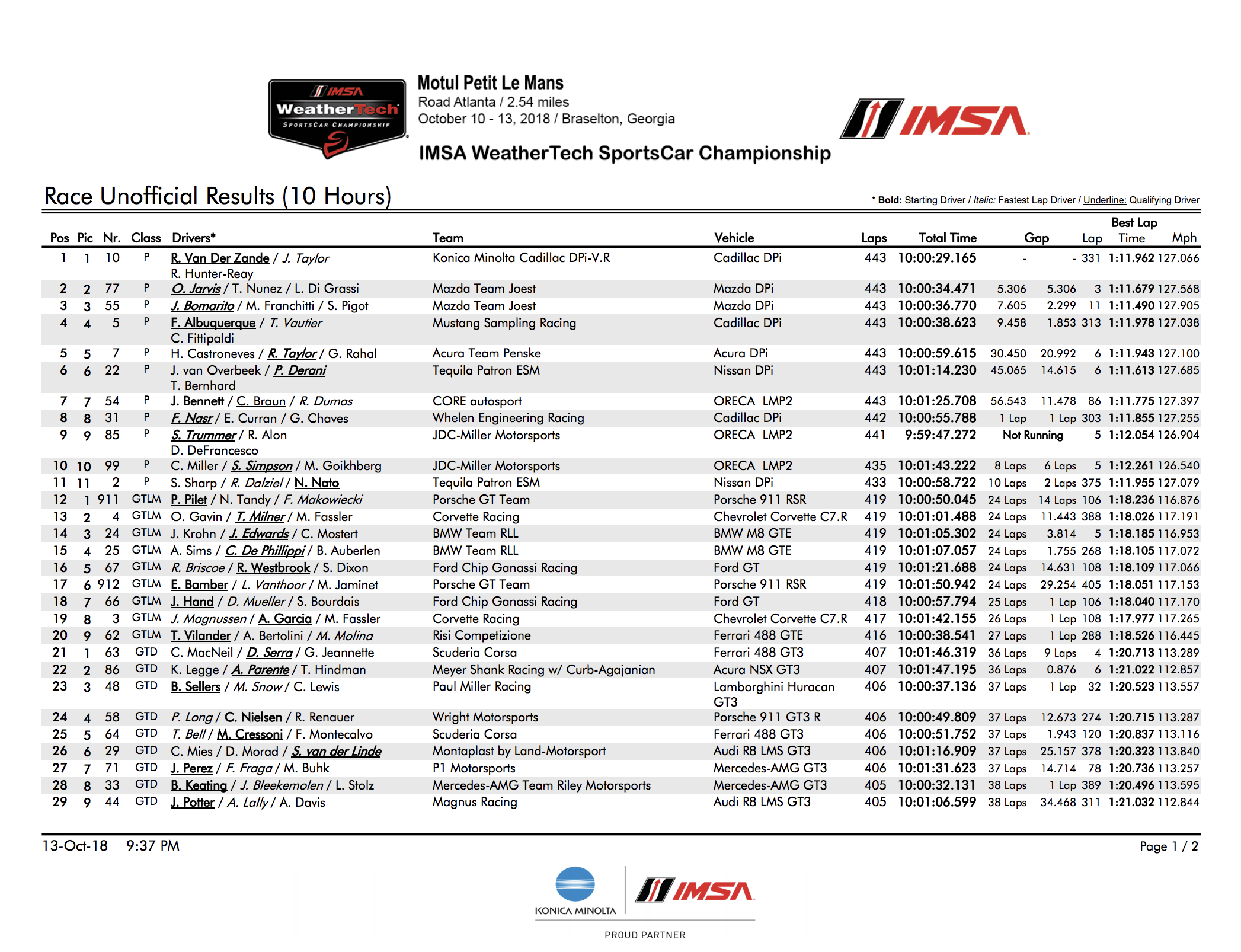 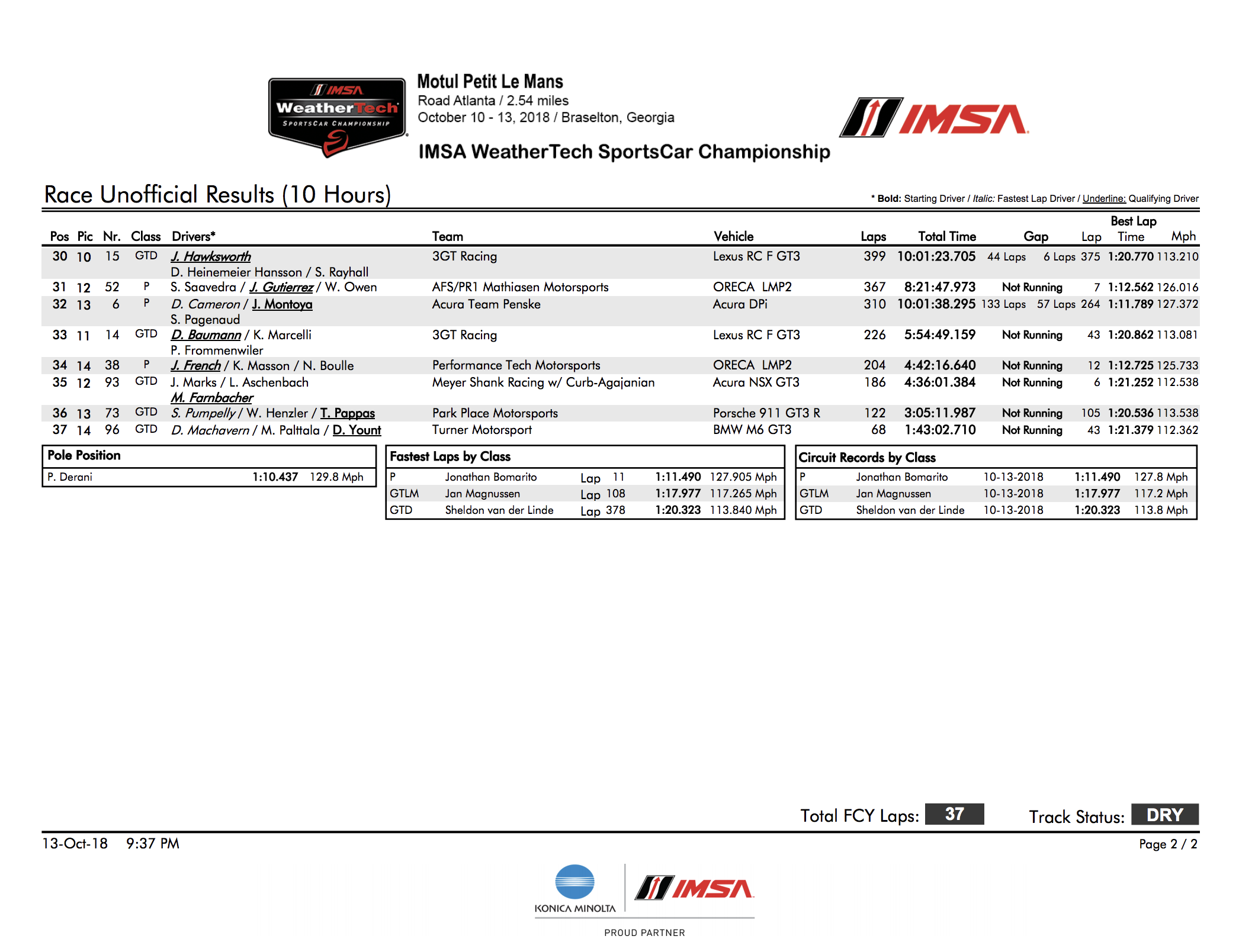