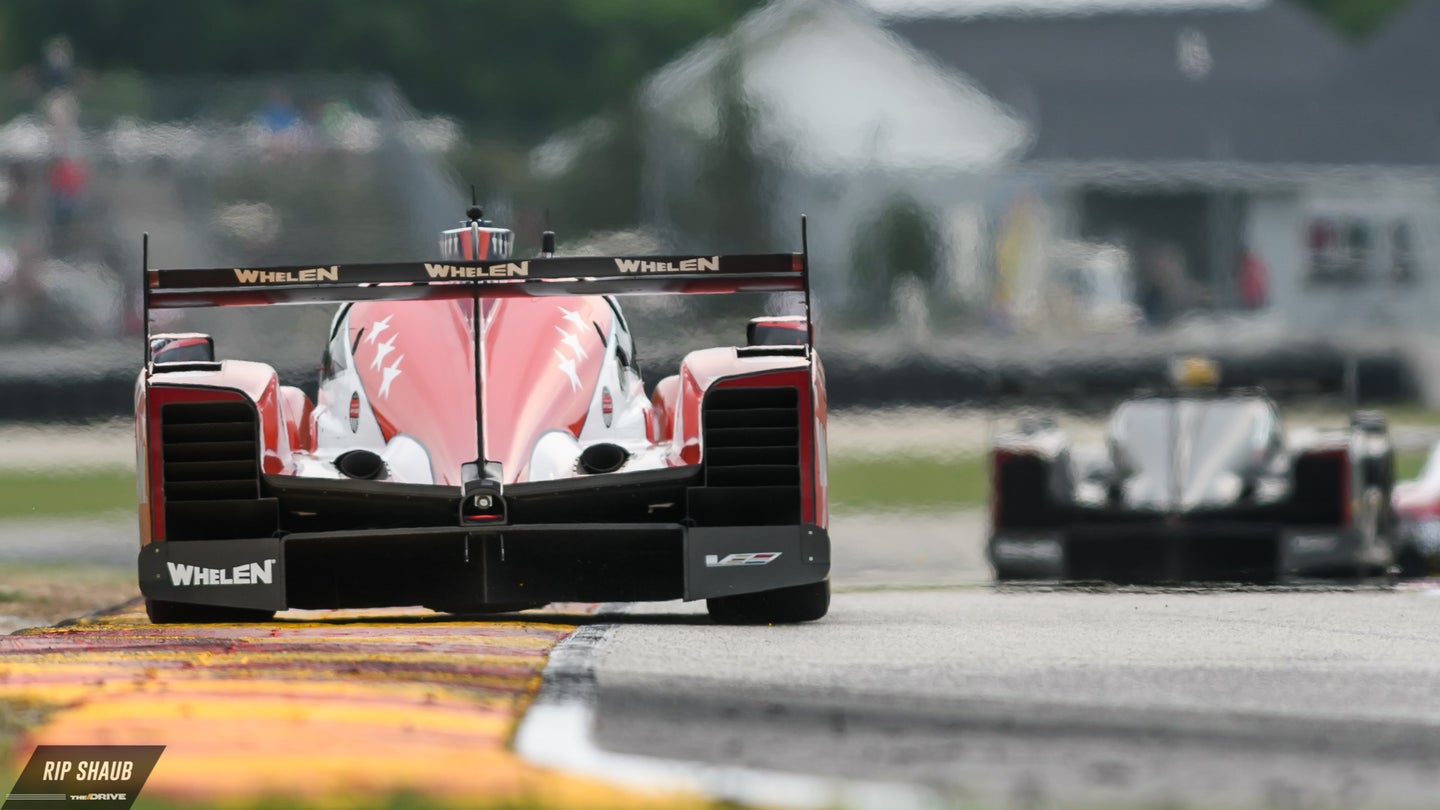 Such tight circumstances mean that Saturday's 10-hour endurance race will breed even more drama to pair nicely with the anticipated spectacle that's inherently featured at the event. For background, The Drive has created a breakdown of each class title fight including what it will take for the remaining contenders to take home the 2018 season hardware.

IMSA's top-level Prototype category is being fought over by two teams who've had vastly different seasons but sit just four points apart from each other (254-250) heading into Petit this weekend.

The current points leader, Team Action Express in the No. 31 Whelen Engineering entry, has displayed nothing if not consistency throughout the year. One victory at Belle Isle in June did boost the team's position in the standings, but aside from that, it's been a steady flow of podiums and top-fives that have helped drivers Felipe Nasr and Eric Curran maintain their spot atop the championship.

“If we can execute on everything, hopefully, we will be in a position to take the IMSA championship and the Tequila Patron Endurance Cup, which we’ve never done with the Whelen car, and go out with a win," Curran, the 2016 IMSA Prototype champion, said. "What a way that would be to close out 2018."

The season's second half, however, has belonged to CORE Autosport with its No. 54 Oreca 07 Gibson. Headed by team co-owner Jon Bennett and ace pilot Colin Braun, the Pro-Am squad has gone on a tear which includes a pair of victories at Mosport and Road America. Add an equal number of pole positions to the mix and you have the most successful LMP2-running team in the field.

“Being successful at Petit will be less about ultimate pace and more about having a clean race, being smart in traffic and being able to adjust your strategy as things change. It’s a long, tough race with a lot of traffic," Braun explained.

In order to snatch the Prototype Drivers' and Team championship away from AXR, CORE will need to distance itself up front at the checkered flag. Even if the No. 54 car wins, the Whelen Engineering crew will have to finish third or lower to surrender its title. Furthermore, if CORE claims second-place, the No. 31 will have to finish fourth or lower in order for the final standings to flip-flop.

The Manufacturers' championship will automatically be awarded to Cadillac upon taking the race start.

Despite not winning a round yet this season, the No. 3 Corvette Racing C7.R driven by Jan Magnussen and Antonio Garcia is in command of the GTLM championship. They'll look to capitalize on that advantage at Road Atlanta, where they'll share the driver seat with Marcel Fassler, to defeat second-place Chip Ganassi Racing's No. 67 Ford GT team.

Historically, Corvette Racing is the most successful team at Petit Le Mans. Since the race's origin in 1998, the American outfit has won its class nine times with Oliver Gavin, co-driver of the No. 4 entry, boasting the most wins as an individual with four. If the No. 3 were to recreate that success on Saturday, Corvette would earn its third-consecutive GTLM title thanks to an existing nine-point gap (299-290) to its nearest rival, the No. 67 CGR Ford.

“There’s always pressure when you go to Road Atlanta, especially when you are fighting for a championship," Garcia noted. "We were in a perfect scenario last season where we only needed to start to clinch. It won’t be like that this year. I really like this track and the event itself. It’s very challenging. Hopefully, we have a good chance to win the championship by scoring a good result."

The Ford boys, meanwhile, remain hopeful that they can recover from the deficit. Drivers Ryan Briscoe and Richard Westbrook have three wins to their names in 2018—the most of any GTLM entry—but have faced mixed results in other cases.

“I don’t think anyone at Ford CGR is giving up the fight quite yet,” said Ford Performance Motorsports Global Director Mark Rushbrook. “It’s been quite a season for the Ford GT and the team and all of our partners, and we’re looking forward to seeing the conclusion.

Plenty will have to fall in CGR's favor to win the Drivers' and Team titles, though the cliche of "anything can happen" rings true at the season-ender. If the No. 67 car wins, Corvette's leading entry will need to finish fourth or higher to retain its lead. In an instance where the Ford finishes second, the No. 3 'Vette will need to drop to eighth or lower to give up the title.

Ford, like Cadillac in the Prototype class, will take the Manufacturers' Championship upon taking the initial green flag.

The GTD title fight is considered by many to be the most entertaining of 2018 thanks to continuously strong showings from Paul Miller Racing and a stellar underdog story featuring Meyer Shank Racing's Katherine Legge. The former set the tone by taking class victory at the season-opening Daytona 24 and repeating with a win at Sebring in March. Being forced to claw from an early gap, Legge has inched her way to a six-point deficit (303-297) and hopes to complete the comeback during Saturday's endurance round.

PMR has maintained its initial momentum throughout the year, putting its Lamborghini Huracan GT3 in the top-five at every race save for one.

"This has been an incredible season with some great team efforts. You work the entire year to get to this final point, and hope in the end you have a chance at the championship," said PMR driver Bryan Sellers. "We have had some great battles with the 86 and it seems appropriate that it is coming down to the final race for the championship. They are a great team and have brought everything they have to every race and will do the same until the very end. It will be on us to do the same; To try and execute to the best of our ability and try to finish the job we started in January."

Speaking of the No. 86, Legge is coming in hot off a win at Laguna Seca, the most recent race leading up to Petit. There, she and co-driver Alvaro Parente maneuvered their way past Park Place Motorsports and Mercedes-AMG Team Riley while Paul Miller Racing watched from outside the podium. Originally scheduled for North American Endurance Cup rounds only, Legge has held her own with varying teammates to put herself solely in position to take the class championship.

“Katherine and Meyer Shank Racing have kept themselves and the Acura NSX GT3 in title contention from their podium finish at the Rolex 24 to winning from the pole last month at Laguna Seca,” said Art St. Cyr, president of Honda Performance Development and Acura Motorsports. “It’s been an intense battle all season long, and we expect this weekend’s season finale to be no different."

Odds lie with PMR on the surface as it can clinch the Drivers' and Team title sby placing its car in first, second, or third, regardless of where Legge finishes. If Legge wins in her No. 86 Acura NSX GT3, then PMR would need to finish fourth or lower to relinquish its potential crown.

Lamborghini will take the GTD Manufacturers' Championship if a Huracan GT3 finishes in P7 or better. In order for Acura to take the honors, the make would have to win and see the best finishing Lamborghini fall to eighth or worse.

The cars will navigate a lap of Road Atlanta as a tribute to Don Panoz, the racing and technology pioneer who passed away in September.