Being LGBTQ+ in Racing: ‘It’s a Very Old Mentality to Think Sponsors Wouldn’t Support You’

Rokit Venturi Racing’s Chloe Bearman on being an out woman in motorsport, and how greater diversity benefits everyone. 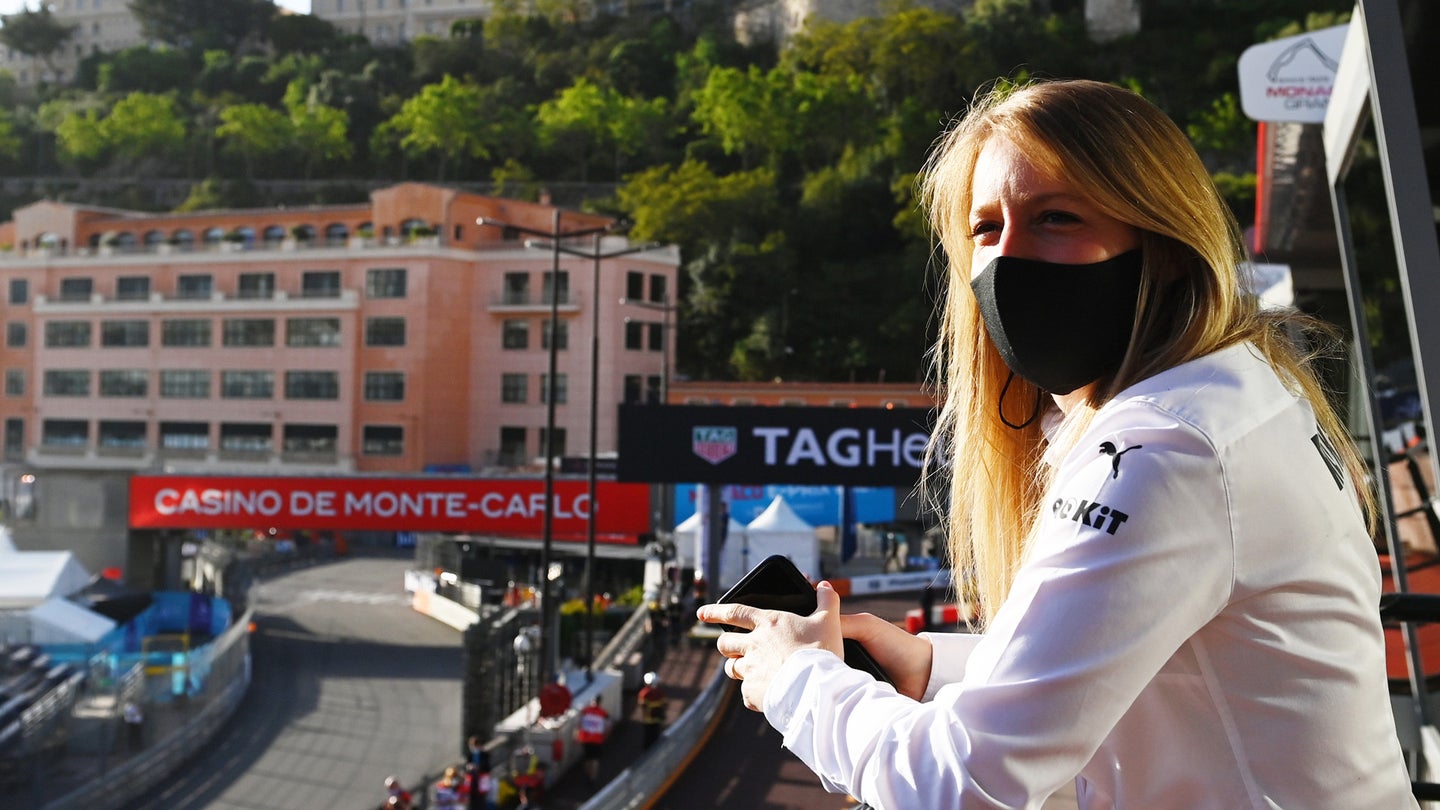 In racing, doing things that other teams don’t think about doing is the absolute tactical sweet spot. Sometimes that means working out some clever way of warming your tires or finagling a diffuser so that it’s just within the rules but gets you a speed advantage on your rivals. Sometimes, however, it's an approach that's completely different.

Much of the art of racing is being brave enough to do things—on or off the track. Socially, the machismo-fueled world of motorsport can seem deeply conservative or even completely at odds with the 21st century, but things have been changing. From Aston Martin’s F1 team running Racing Pride’s logo at the French Grand Prix to Sarah Moore becoming the first openly LGBTQ+ person to stand on the podium during an F1 weekend a few days ago, there’s been a lot more visibility across paddocks.

Over in Formula E, Rokit Venturi Racing added the Pride flag on its car for the Puebla Eprix. Driver Edoardo Mortara took it to the podium twice there—once on the top step—but Venturi’s head of partnerships, Chloe Bearman, also made headlines by penning a heartfelt piece for the team's blog about why it was doing so, and what it meant for her personally, as a gay woman.

As one of a handful of out motorsport journalists myself, it was a privilege for me to sit down with Bearman for a chat about why she chose to do this now, and what it had changed. She started by telling me that the response to her initial Pride story had been overwhelmingly positive.

“Honestly, the outpouring of support and the messages that I've got made me quite emotional because when [Venturi’s head of communications Liz Brooks] first suggested it, I was like, great, but I was also nervous," Bearman said.

“I've been working in motorsport for a long time and I've never seen any sort of representation of my community," she said. "Now we see more, especially in Formula One, but in my early days, I didn’t see any sort of representation. So when I was given the opportunity to speak up I was like 'OK, let's do this.' I felt a strong sense of responsibility to use the platform the team has to do good."

“It is quite scary to put yourself out there," she added. "But then the amount of messages I've got from people I know, and people I don't know, just coming to me and saying ‘thank you’ was incredible. It was just crazy to think it can have such an impact but that’s also a reminder of why being open in this way was so important.”

Bearman’s role on the team makes her a particularly interesting person to speak to about being LGBTQ+ in motorsport. As Head of Partnership Activations, she looks after sponsors in countless ways, from making sure their logos are on the cars in the right places to keeping them happy and well-aligned with the team, ensuring they renew their contracts and that everyone’s getting the most out of their association with Venturi.

The thing that’s allegedly stood in the way all these years and kept people in motorsport from coming out, had always been “the sponsors.” You can’t have an openly gay driver because the sponsors would leave. You can’t talk about LGBTQ+ people in a team, because what would the sponsors think?

It's shorthand for making one's identity controversial when it should not be; translated, it's the same as hearing "Oh, you can't shock your grandmother like that" when you want to bring your own partner home for the holidays.

And yet in the world of top-flight motorsport sponsorship, there's an extra element of hypocrisy at work. These are big, international companies; the exact same ones, in a lot of cases, that sponsor corporate-friendly floats at pride marches. Needless to say, none of Venturi’s sponsors have questioned the team's embrace of Bearman and Pride writ large. quite the opposite, as they were fully in favor and they got plenty more eyes on their logos, even.

“Maybe LGBTQ+ people in the past have felt uneasy coming out in sports environments,” Bearman said. “The first-ever guy from the NFL, ever, has come out as gay. It's just not statistically possible that he is the first [NFL player] to be gay. But if you go against the grain and say ‘oh, but actually I am gay,’ I think it's a very old-fashioned and outdated mentality to think that the sponsors and partners won’t support you."

“We have the most amazing partners on board, she added. "Hewlett Packard Enterprise, for instance, activated so much over Pride Month, and they know that there's strength and creativity in diversity. And most brands see that now and celebrate that—I can't imagine that in this day and age that any brand that sponsors drivers or a team would be wholly against celebrating Pride.”

Unfortunately, that can happen. In the U.S., Ryan Hunter-Reay of Andretti Autosport was the only racer in the IndyCar field with some sort of LGBTQ+ representation via his DHL sponsorship. Even then, the move was met with criticism online and social media from some of IndyCar's fans, leading Racer.com to turn comments off on its piece about it. That's where my job comes in, of course, in calling out not just companies or people that threaten to pull their stickers off a car, but also schemes like F1’s We Race As One, where it used a not-quite-a-logo to not-quite-mean anything last year.

Bearman said it had to be much more than a sticker on Venturi’s car. “It fits really well with our core values as a team but we also wanted to do something more than just put the flag on our car. We wanted to use this as an opportunity to open up our team to fans and showcase our diversity and in doing so, hopefully, make others realize that inclusivity in motorsport is possible. We've seen a lot of brands just change the logo for Pride Month, but what are they doing to actively and authentically promote and support this community?”

Bearman said that, prior to talking about her experiences this month, she’d avoided a lot of prejudice. “I come from a place of privilege in that a lot of people don't know that I'm gay unless I tell them, so I’ve had that choice," she said. "I've worked in motorsport for 10 years now and I haven't faced any kind of prejudice but that’s likely because the majority of people didn’t know that I'm gay.”

She said that had led to its own awkward situations over the years which, y’know, none of us love having to find explanations for not being straight. But fortunately, the Formula E paddock is, at least, more welcoming. As should be fitting with its environmental message, the series has generally been more open, diverse and more progressive than other forms of motorsport.

“We are the most gender-diverse team in the paddock,” Bearman said about Venturi, which is more than 30 percent staffed by women. “We have created a culture where we actively support and promote diversity. So my experience since joining the team has been great. I've always felt supported and I haven't experienced any sort of negativity."

“But that's not to say that that doesn't exist, it does and that's why initiatives like Racing Pride are so important, because there are people in this community who have shared stories where they have felt uneasy, discriminated against, and not welcome. So what they're doing now and what the team has done is to actively say, you're welcome. Diversity is welcome and celebrated: this sport is not for one type of person.”

A study published at the start of this Pride month showed that children benefitted in an environment where positive messages about LGBTQ+ people were regularly shown, whether those kids were LGBTQ+ or not. A more inclusive environment can help anyone in having more freedom to be themselves and reducing anxiety. That can be true anywhere, especially in a world that people daydream about being part of, like motorsport.

Bearman said she’d been moved by the amount of support she has received in speaking openly about being LGBTQ+. “My experience, especially over this past week; the number of messages I’ve had and the outpouring of support, it's been incredible. I would say [to anyone LGBT who wants to work in motorsport] that you are welcome and don't think that you won't be accepted—your gender, race, religion, sexuality should have no bearing on your ability to do your job.”

She wanted to make it clear that the choice to talk about yourself is up to the individual, but making it so that people are able to be something everyone could make a difference in.

“It’s so personal but it's down to the wider community to support the individual," Bearman explained. "There are plenty of studies that show people just need one supportive adult in their lives, that can make them feel supported enough to come out. If everyone can support one another, a more inclusive and productive working environment will be the result. Because the problem isn't with the LGBTQ+ community, it's not a problem that I am a gay woman—the problem is one of wider societal discrimination and bias.”

Formula E's next race is the New York Eprix on July 10-11 in Red Hook, Brooklyn.