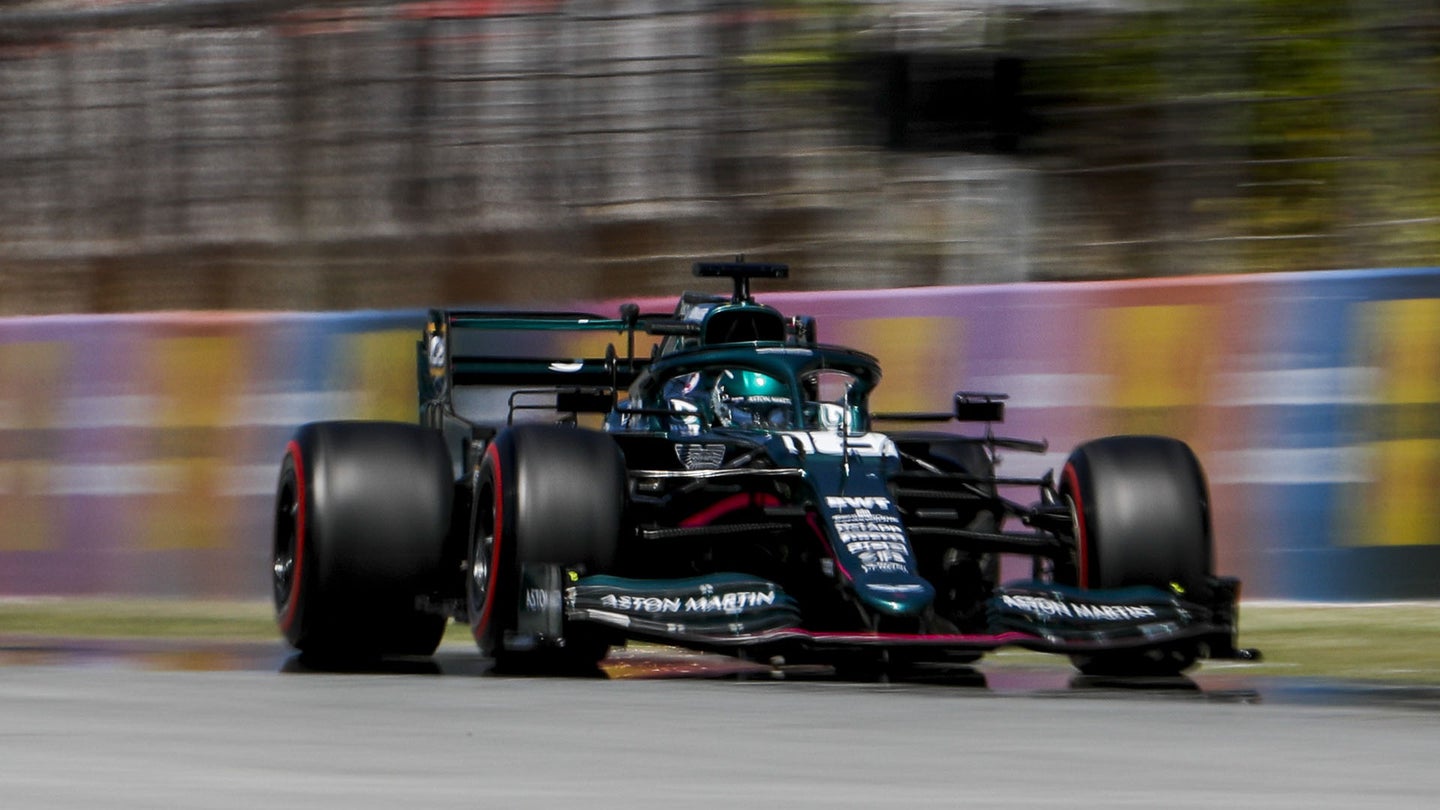 Aston Martin's F1 team has announced a partnership with LGBTQ+ representation organization Racing Pride, to put its logo on the teams' cars for the French Grand Prix in celebration of Pride Month. It's not the first time that the pride rainbow has been featured during a Grand Prix weekend (Holden Commodore ran it as a livery in a support race back in 2017), but it is the first time on an actual F1 car and an extremely welcome sight in explicit support of LGBTQ+ people in motorsport and around the world.

F1, as a series, has sent seriously mixed messages about pride. Last year, it made a 'We Race As One' rainbow allegedly to show the collective efforts of teams to support key workers fighting COVID-19; it was a melange of team colours, rather than the pride rainbow. It was a mess of a diversity initiative, going as far as saying that it's not representing LGBTQ+ people. McLaren took it a step further, however, by putting a neon version of the proper pride rainbow on its cars (and drivers), but there was still a bit of mumbling about it being for healthcare workers rather than, y'know, what it has meant for decades to a group woefully under-represented in motorsport. McLaren kept the rainbow on its race suits but the series as a whole has retired its awkward repurposing, making way for Racing Pride's logo to show what it actually means.

So it's extremely important that Aston Martin's partnership with Racing Pride is explicitly about LGBTQ+ representation. No mincing words, it's not just a logo, this is the team coming out and saying they support LGBTQ+ equality and are working with Racing Pride to promote more inclusion and diversity within their organization.

The team's communication director, Matt Bishop, is openly gay and wrote last year that, when he was first working in F1, a driver called him a "fat f*ggot." Although Bishop recounts it with characteristic humour and frankness, it's now very good to see Aston Martin's drivers quoted in specific, open support of LGBTQ+ people.

"I want to help highlight the positivity around the message of inclusion and acceptance," said Four-time F1 champion Sebastian Vettel in a release. "I congratulate the people who have pushed the discussion that has led to wider inclusion; but, equally, I’m aware that more needs to be done to change attitudes and remove much of the remaining negativity."

"It is great to see Aston Martin giving this issue support – there is a long road ahead, but I’m really pleased we can play a positive role," Vettel added.

There's only been one, known gay male driver in Formula One; Mike Beuttler, who competed in the early '70s and tragically became one of the victims of the AIDS crisis in 1988. F1's only female driver to score (half) a point, Lella Lombardi, was a lesbian but there have been no openly out drivers since Beuttler and Lombardi, who both stopped racing more than 40 years ago.

There's a lot of wrong thinking about it; that an openly LGBTQ+ racer would lose sponsors, for instance, as though the scale of global brands seen in F1 could get away with dropping someone for being gay or trans. The motorsport media has to take a degree of responsibility for the hostile environment to LGBTQ+ people but it's also true that it's just been more comfortable for the majority of people in F1 to not need to think about inclusion, reassured that the mythical meritocracy the sport's alleged to run on will be doing its work.

F1 races in several countries (Russia, Saudi Arabia) where being gay is illegal and others (the UK, where most teams are based and Azerbaijan, where this weekend's Grand Prix will be held) where LGBTQ+ rights have seen serious challenges in recent years. Unquestionably, there are LGBTQ+ people who work in the sport; Bishop is marvellous, prominent proof of that and Aston Martin's latest driver signing, Jessica Hawkins, is in an extremely "life goals" relationship with fellow racer Abbie Eaton. But it's rare for that to be talked about with genuine pride, beyond the small openly LGBTQ+ motorsport community.

So it's very cool that this isn't just a sticker—Aston Martin will be publishing stuff celebrating the LGBTQ+ motorsport community all month and will be undertaking inclusivity workshops and reviews with Racing Pride. And it's going to put it right there on the cars, on a Grand Prix track, so that people like me don't have to hide in the sport.

Celebrating pride month on your race car? Mail me on hazel@thedrive.com