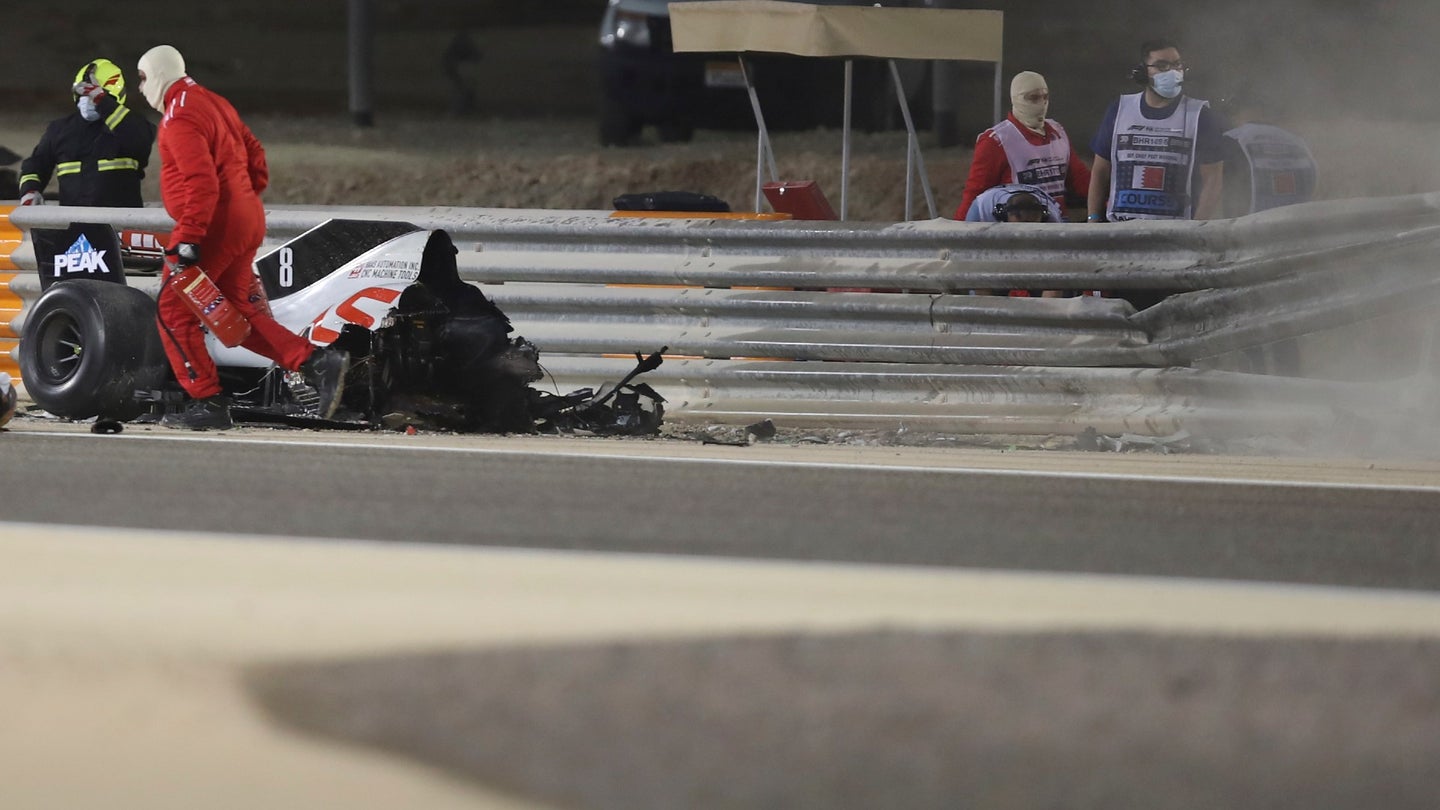 The FIA has finished its investigation into Romain Grosjean's horrifying crash at the 2020 Bahrain Grand Prix. The initial conclusions describe what happened during the crash, including the speed of travel at the point Grosjean's car pierced a corrugated iron barrier. The force of impact was revealed, as was how the high voltage energy recovery system broke apart, igniting contents of the fuel safety bladder to create the fireball that severely burned Grosjean as he escaped the mangled remains of the car.

The report says, "Grosjean’s car impacted the triple guardrail barrier behind the run-off area at 192 km/h (119 mph) and at an angle of 29 degrees, with an estimated yaw of 22 degrees to the direction of travel and a resultant peak force equivalent to 67g." The impact was so enormous that the car's survival cell destroyed the middle part of the barrier, traveling through and causing further damage to the top and bottom barriers, while the car itself broke apart with the majority of the hybrid powertrain separating completely from the front of the car.

The fuel that ignited during the crash, although extremely dangerous, was not the majority onboard the car. It fortunately came from a smaller "safety bladder" that feeds into the engine, rather than the whole kevlar fuel cell rupturing with close to 100 kilograms of fuel at the start of a Grand Prix. It concludes, "The fuel tank inspection hatch on the left-hand side of the chassis was dislodged and the engine fuel supply connection was torn from the fuel tank 'safety bladder'; both providing primary paths for the escape of fuel from the tank."

The report concludes that the survival cell and all driver safety equipment functioned as they should, although Grosjean's foot was initially trapped in the car before he was able to pull it free of his racing boot to escape. It says it took Grosjean 27 seconds to free himself, including having to move the headrest and steering wheel, both of which had been moved by the crash, before being met with the on-track medical team as he leaped over the barriers.

FIA safety director Adam Baker said, "Incidents involving fire of this scale are thankfully rare, so it is very important to learn what we can, including the interaction with the high voltage system. The efforts of those involved were heroic and have quite rightly been the subject of much praise.”

Grosjean's incident, in addition to being assessed on its own, was analyzed with 18 other crashes that will feed into future safety plans across 22 areas. The list of subjects for review includes five investigations specifically into the fuel safety bladder and its design, a review of the structural geometry at the front of cars' survival cells, and an analysis of power unit mounting and mount failures. They'll also review the headrest assembly, the steering column mounting, the process for circuit homologation and risk assessment software, and existing circuit barrier installations. Finally, they'll look into the heat resistance of drivers' gloves and visor opening systems as well as five additional items for national motorsport associations with regards to training marshals.

There will be four investigations into a potential proximity warning system for drivers and possible better visibility options using electronic features (like video wing mirrors) as well as barrier systems and trackside fire safety equipment.

Got a tip about motorsports? Mail me at: hazel@thedrive.com