All of the deceased, plus the three injured, were either Marine veterans or military families. 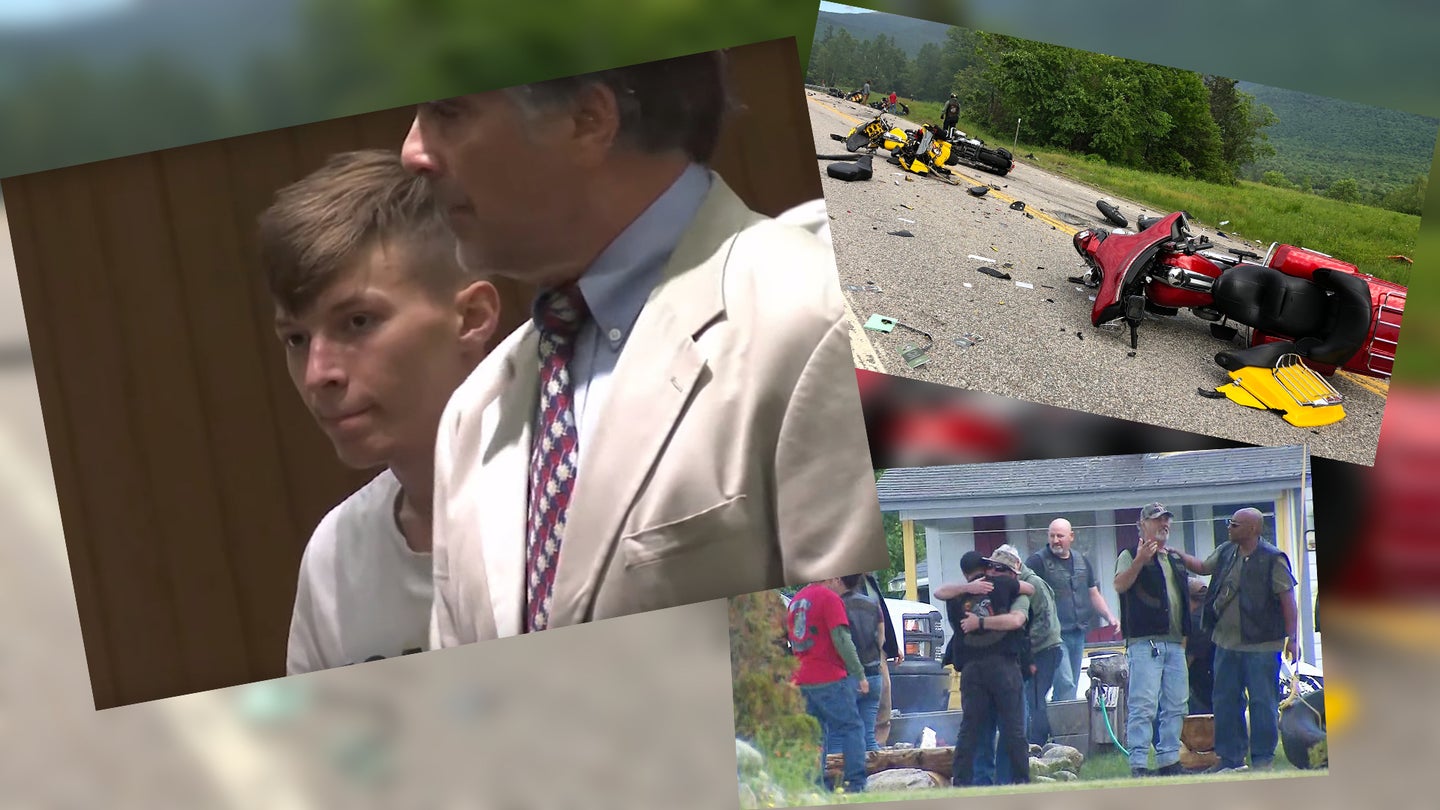 Last Friday, tragedy struck the motorcycle and military veteran community after a pickup truck collided with a group of motorcyclists in Randolph, New Hampshire, killing seven and injuring another three. New Hampshire police and attorney general’s office report that 23-year-old Volodymyr Zhukovskyy from West Springfield, Massachusetts was arrested and charged on seven counts of negligent homicide on Monday.

Police originally questioned Zhukovskyy on the scene but was allowed to return to his home in Massachusetts, according to the National Transportation Safety Board. On Monday morning, a man reportedly answered the phone at his residence and identified himself as his brother-in-law, saying his family was “in shock” and feeling as pained as everyone else, reports the New York Post. However, he didn’t disclose where or not he believed if Volodymyr was guilty.

Zhukovsky reportedly has a long history of alcohol-related offenses, including an arrest for driving under the influence in Westfield, Massachusetts in 2013. From that offense, his license was suspended for 210 days with a probation period of one year, according to The Westfield News. Then just last month, the 23-year-old experienced a run-in with the law after police officers in East Windsor, Connecticut responded to complaints of a man “revving his truck” and acting erratically outside his vehicle in a Walmart parking lot.

When Zhukovsky was arraigned in a court in New Hampshire, he reportedly appeared visibly remorseful, looking down at his feet as he was led through the courtroom in cuffs. The investigation is still ongoing.

"This is one of the worst tragic incidents that we have investigated here in the state," New Hampshire State Police Col. Chris Wagner told The Los Angeles Times on Saturday. "It's going to be a very lengthy investigation."

The 10 victims involved in the crash were either supporters or members of the Marine JarHeads motorcycle group based in New England. It’s a group that mainly consists of Marine veterans and their spouses aged 42 to 62, according to CBS local affiliate, WBNS.

A GoFundMe page was set up to help the victims, their families, and the biker’s club. A candlelight vigil involving fellow motorcyclists and others within the community was held on Sunday, which attracted over 400 motorcyclists in a rally. A second fundraiser and vigil are planned for Wednesday.

New Hampshire Governor Chris Sununu ordered flags to be flown at half-mast on Monday to pay tribute to the victims.

"Everyone's suffering so much," George Loring, a member of the JarHeads motorcycle group who witnessed the accident told reporters. "It's so sad for the brothers and sisters who died. You can be angry at him, you can be whatever. I don't know. I'm glad he's been arrested."

The president of JarHeads, Manny Ribeiro, who was involved and survived the crash, told reporters that the group just finished dinner and was en route to a fundraiser at the American Legion post in Gorham just a short ride away. There were a total of 15 motorcycles and 21 riders in the caravan on the way to the post. Ribiero also said he remembers seeing Zhukovsky “screaming and running” around before being apprehended by authorities. Others were supposedly yelling at Zhukovsky, exclaiming whether he was aware of what had just occurred.

"It was just an explosion ... with parts and everything flying through the air," Ribiero told reporters. "He turned hard left into us and took out pretty much everyone behind me. The truck and trailer stayed attached and that is why it was so devastating ... because the trailer was attached and it was such a big trailer, it was like a whip. It just cleaned us out."

"I saw Al [motorcyclist]. I knew he was gone right away," continued Ribiero. "At that point, we just tried to figure out who needed help and got to work. There was debris everywhere and the truck was on fire. I was just looking for survivors, familiar faces and trying to find out who I had lost and ... trying to help the living."

“When something like this happens, we all feel it,” said Cat Wilson, an organizer for a charity event in Massachusetts. Wilson was also a friend of one of the victims. “There is no tighter community than our biker community.”