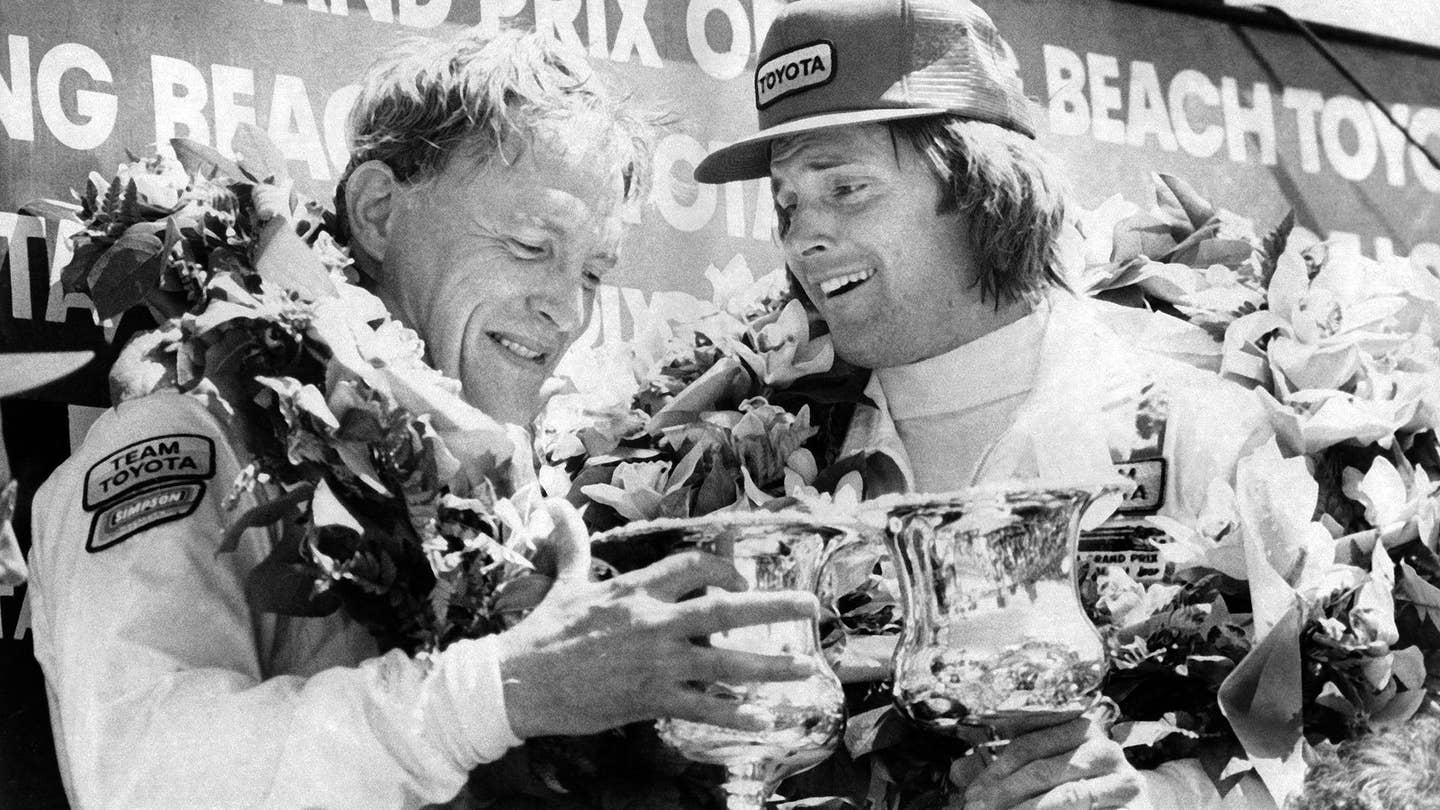 Wherever you stand on gender politics, you have to admit that the Caitlyn Jenner saga is mind-boggling. Nothing like it has ever happened in American history. Bruce was an Olympic champion, Wheaties cereal box hero, ubiquitous metaphor for #winning, husband to Kris Kardashian and—oh hell, you know the rest. But the media has ignored one of the saga's most interesting narrative threads, certainly for car nerds: Caitlyn Jenner the speed freak. Yes, she was a professional racing driver, with a remarkable story that was most definitely legit.

The 1976 Summer Olympics in Montreal made 25-year-old Bruce Jenner an instant American hero. Jenner won a gold medal in the decathlon, but that just kick-started his fame. He had the looks. He had the charisma. And, he had beaten the Russians! He was invited to the White House, and got his mug on Wheaties boxes. He signed endorsement deals for shoes, clothes, bicycles, weight-lifting equipment, and Minolta cameras. In short, he became rich. “I’m very fortunate,” he told People magazine in 1980. “I now no longer have to do things I don’t want to do.”

So what did he want to do? Ride his jet ski, sail his boat, fly his six-passenger airplane. In April 1979, Jenner got invited to compete in a celebrity motor race, as a prelude to the Formula 1 Long Beach Grand Prix. He took the lead from Fred Dryer (6’6” defense end for the Los Angeles Rams) in the second lap of a short race on the street circuit, and went on to win, defeating Clint Eastwood and actress Jayne Kennedy (who had small parts on “Wonder Woman” and “Trapper John, M.D.,” among other roles). Jenner was “scared to death,” he said afterwards. But he was also hooked. The Gods of velocity had spoken to him.

This is where the story becomes remarkable.

Jenner studied the craft, and went out to Riverside in California to test with a pro team, headed by Jim Busby. As Busby said, he had to “determine whether or not [Jenner] actually was a racing car driver.” It turns out, Jenner had some talent, and he took instruction well. He made his debut as a professional in Busby’s mid-engine BMW M1 at the 24 Hours of Daytona just 10 months after that first celebrity race (the team placed 56th).

Ever watched the 24 Hours of Daytona? It's not an arena for amateurs. It is the sort of real professional racing where people who can’t hack it can get killed. According to Busby, Jenner was cracking 200 mph in the March M1. “He looked very smooth,” said Busby. “We wanted him to run at a two-minute pace, and you could have set your watch by his consistency. I was quite impressed. He took to it like a veteran.”

Here’s some in-car and out-of-car footage from Jenner’s second professional outing, a month later at the 12 Hours of Sebring.

Jenner went on to compete professionally for much of the 1980s. He teamed with serious hot-shoes, from Scott Pruett to Arie Luyendyk to Scott Goodyear, with a total of 57 starts, according to racingsportscars.com. The thing is, he was never fast enough to leave his celebrity behind; at the racetrack, he was considered a star first and a driver second. “It is because of my name and the amount of media coverage I can bring to Ford and 7-Eleven…that it is much easier for me to get good equipment,” he was quoted in a 1985 Los Angeles Times story called “The Vote Is Still Out on Jenner as a Driver.”

“Bruce was a gentleman,” says Randy Lanier, a champion sports car driver in the 1980s who remembers meeting Jenner in the early days. “He was polite, he was respectful, and he was respected on the track.” He didn’t win much, but, as Lanier says, “If you want to be a winner in racing, you got to eat, drink, talk, sleepracing.” Still, you have to hand it to Jenner: It took balls to compete professionally. What no one knew at the time was that Jenner was already working on transitioning, even back in the 1980s.

Scott Pruett recently described Jenner in his racing days as a “studly jock.” “I wish him well with whatever makes him happy,” Pruett told the New York Daily News in February. “He’s always been nothing but supportive and helpful to me and I wish the same back to him.”

These days, Jenner is rarely, if ever, spotted on racetracks. And while it's a stretch to imagine one of the Kardashian women racing cars, Caitlyn's son Burt races professionally in the Stadium Super Truck series—he even won the support race for IndyCar’s Belle Isle Grand Prix in Detroit last year. And then there’s this interesting footage, of a track-package Lamborghini with a “Jenner Racing” logo.

Could there be a Jenner comeback? Bring the speed, Caitlyn.