Ford GTs Are Good, But They Need To Be Great. Quick.

All four Ford GT race cars were on the track this weekend. 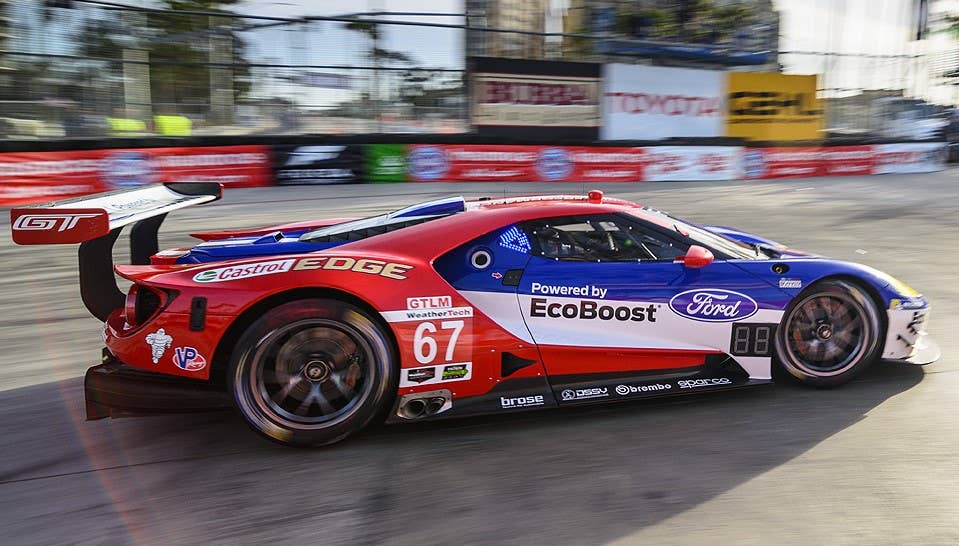 Edsel Ford is calling the Ford GT campaign to win the 24 Hours of Le Mans, on the 50th anniversary of the GT sweep at Le Mans, “an assault,” and that’s what it is: Four fully factory-backed cars, 12 drivers, near-unlimited resources.

So far, so good, but “good” isn’t good enough. This weekend, for the first time, all four cars were on the track, the two U.S.-based GTs at the Bubba Burger Sports Car Championship at the Grand Prix of Long Beach, and the two England-based cars at the World Endurance Championship six-hour race at Silverstone.

How’d they do? Good. But they will have to get better to beat far more experienced teams, like the Corvette Racing C7.Rs and the Porsche 911 RSRs.

At Long Beach, the two cars finished fourth and eighth in the 10-car GT Le Mans class. Nothing big went wrong – nor has it since Daytona, really – but the visual takeaway from this race was Joey Hand in the No. 66 car trying to get his semi-gullwing door closed, as it flailed in the wind as he circled the track.

Said Hand: “It was not the day we planned on. A little thing caught us. We had a door latch that wouldn’t hold. I tried my best to fix it in the car, but it just wouldn’t happen. Because it was a short race, I pitted and got out to put Dirk in. It just got us down. The key to it is the stuff we learned. It’s a new program. We’ve been trying to get endurance out of this car. This is the first sprint race we’ve seen. We saw rain at Sebring. We saw a street course here. We’ve learned a lot of stuff and we’re just trying to take notes and make sure we’re ready for the next race.”

The best news from Long Beach was that Dirk Mueller clocked the fastest lap in the class, so clearly the cars have pace.

In England, the two cars finished fourth and fifth in class – but there were only seven cars in the class. The GTs were beat by two Ferraris and an Aston Martin.

As expected, Ford tried to put a happy spin on the first race for the European team. “Considering it was the first race with a new car and a new team we had a clean run,” said Raj Nair, executive vice president and chief technical officer, Global Ford Product Development. “We’re very happy that the car ran well mechanically. We had a couple of issues; we were caught out on safety car timing and we lost radio with Olivier (Pla) towards the end of the race, which had an impact on strategy.  This is a great start though and a good stepping stone to the Le Mans 24 Hours.”

Well, maybe. The U.S. team has only one more race before Le Mans – a long way to go, and a short time to get there.