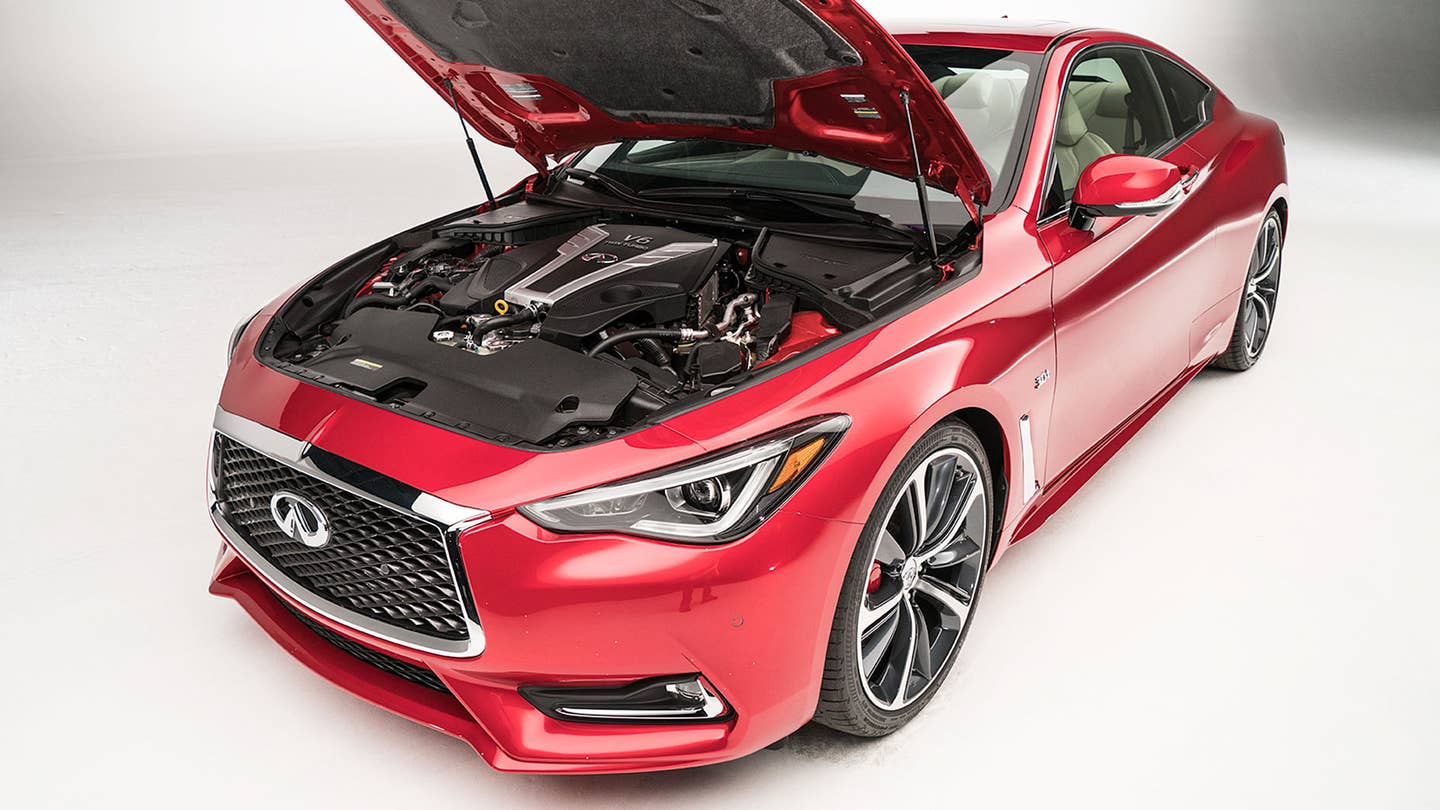 Infiniti just changed the game. The company has rolled out its new Q60 S at the Detroit Auto Show, and the coupe ditches its old 3.7-liter for a 3.0L twin-turbo V6. Output? A stout 400 horsepower and 350lb-ft of torque. (If you'd like the lite-mayo version, it’s still rocking 300 hp). Compare this to the just-updated BMW 440i's 320 hp and, yep, somebody in Bavaria just lost their schnitzel. How’d this happen?

When the BMW 3-Series first went to a twin-turbocharged straight-six, it was all toothy grins and forced induction thrust. The Germs had set a wolf among the chickens, and the competition scattered. Soon, however, the hunted were back with their own supercharged, turbocharged, or simply bigger-displacement sixes. So whereas once that 300 hp figure impressed, it became adequate. And, now, it's looking kinda feeble.

Over at Lincoln, the proverbial pleated khakis of the automotive world, the new 2017 MKZ comes with a turbocharged 400-hp V6. O.K., so we had to rush to Google to remember which one the MKZ was. But that's a hell of a roundhouse kick to pack into a pair of Dockers. Leave the luxury market and wander to the pony car corral, and four hundred horsepower becomes the baseline figure. Both the Mustang and Camaro lack the polish of German machinery, but unless you're packing an M or an AMG badge, you're gonna get bullwhipped by the Yankee cowboys (and not just on the straights). Both base models use V6s, and both are as powerful as their V8 counterparts a decade ago.

Three hundred horsepower is fine these days for a compact hatchback like the Volkswagen Golf R or Focus RS (though not quite enough for the current STI). But everywhere else, the six-cylinder is the new eight, and it’s recalibrating how we think about power. Unless the market starts getting more serious about shedding pounds, three hundred no longer cuts the mustard.

Consider Infiniti's gauntlet thrown: while we're hardly excited by the limp-handshake of drive-by-wire steering, that amount of forward thrust and a well-sorted chassis will make up for all the gauche fender vents in the world. Your move BMW.