Mad Max is gunning for Hamilton, hates the cockpit halo, and wants everyone to know he'd beat teammate Daniel Ricciardo in a kart race. 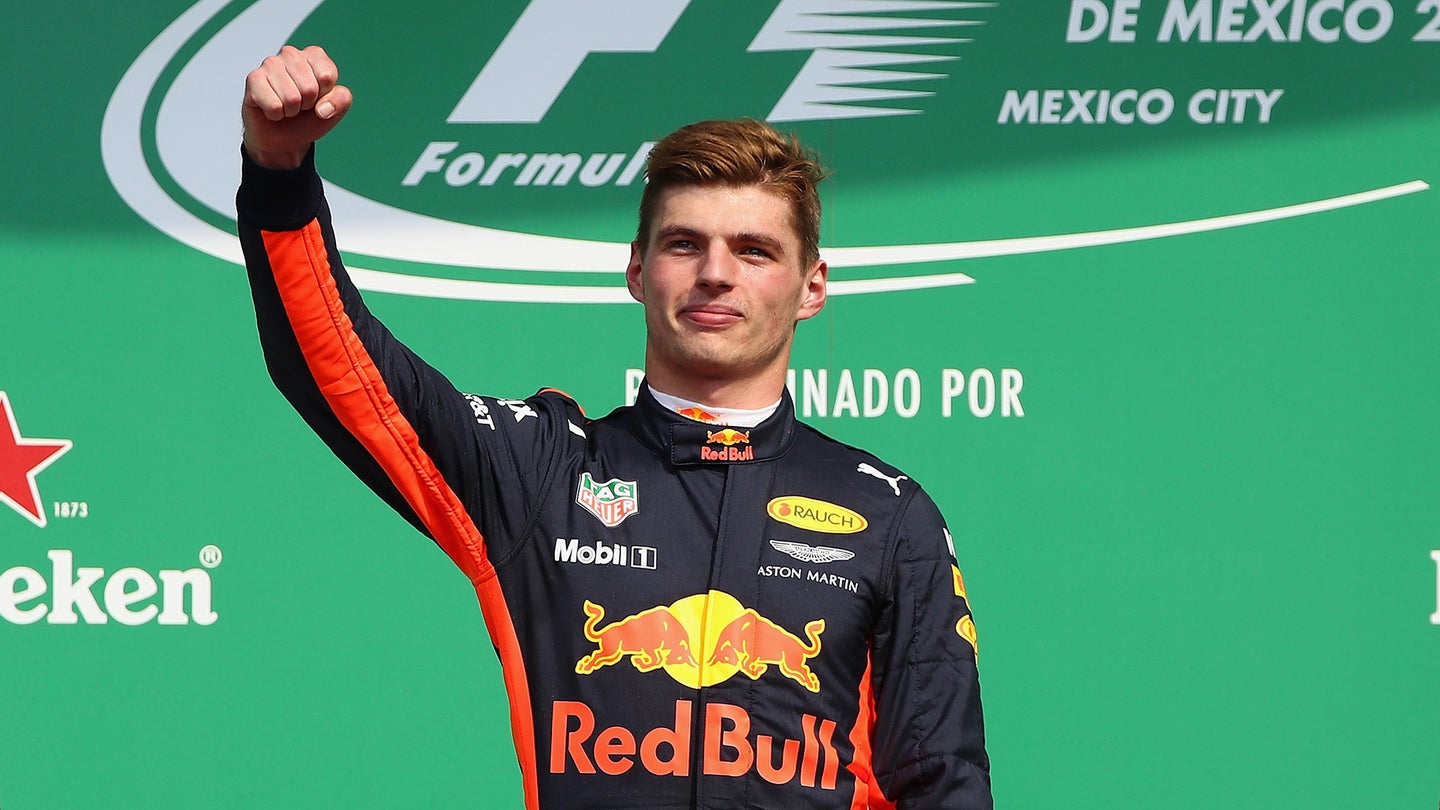 By all accounts, 20-year-old Red Bull F1 ace Max Verstappen is one of the most exciting young drivers in Formula 1 today. Though he got off to a rocky start in the 2017 campaign, he's hit another gear in the home stretch, notching up two victories and three podiums in the last four contests. Lewis Hamilton of Mercedes has already wrapped up the Driver's Championship, but Verstappen's hot finish has placed the sixth-ranked Dutchman within shouting distance of Ferrari's Kimi Raikkonen in fifth place – and theoretically, teammate Daniel Ricciardo in fourth place – with two races to go.

Despite rumors of some tension in the ranks, Verstappen and Ricciardo seem to have saved it for the track, and their competitive year helped maintain a solid third place in the Constructor's Championship for the Red Bull team. Both will return next year; last month, Verstappen signed a three year deal with Red Bull keeping him in the driver's seat until 2020. But for Ricciardo, who will be a 29-year-old free agent in his prime at the end of next season, the future is less clear beyond 2018.

Either way, it's apparent that Verstappen will be a key player in the future of both Red Bull F1 and the sport at large. The son of former Formula 1 driver Jos Verstappen, Max started his career in karts at a little over four years of age. He would go on to become the youngest driver to ever race in Formula 1 in 2015 at the age of 17 and a half, and the youngest driver to win a race when he claimed victory as an 18-year-old in the Spanish Grand Prix in 2016. After 2017's surefire top-10 finish, what will next year bring?

The Drive caught up with Mad Max as he took in the sights, sounds, and smells of his first SEMA experience in Las Vegas on Friday. We were curious to get his thoughts on how this season has gone, the changes he wants to (and doesn't want to) make for next year, how to beat Lewis Hamilton, and his friendly rivalry with Ricciardo. As usual, the gregarious Verstappen was happy to oblige.

The Drive: Is this your first time at SEMA? What do you think of the whole scene, with all that insanity?

Max Verstappen: It is quite impressive. It’s quite a lot bigger than what I’m used to over in Europe, so it’s great to see. I'm more into recent technology when it comes to cars, but I saw some old ones that were really beautifully customized. It was really cool.

TD: They do it big in Vegas.

MV: That’s how it should be done.

TD: So, congratulations on your impressive win in Mexico. That was some pretty smooth driving. It seems like it's all been coming together in the home stretch of the season for you, considering some of the issues you were experiencing earlier in the year. What's changed?

MV: Well, I turned 20 years old at the end of September, and then from there onward everything got a lot better. [Laughs] I have no clue to be honest. I haven’t really changed everything.

TD: Fair enough, though we're not the only ones who've noticed. Lewis Hamilton said this week that he'll need to raise his game next year to defend his title, singling you out as one of the main reasons why. How does that make you feel?

MV: Well, he has to. Absolutely. [Laughs] That’s nothing bad against Lewis, but when you win three, four world titles, your sharpness kind of disappears. So I think at one point if you have a real challenge again from someone, you have to raise your game. Because you’re not really used to fighting it out every single race for victories or podiums, which I’ve been doing for the last three years. I’ve never been in his position, so I’m really determined to get there. I’m really fired up to achieve that.

MV: I am very hungry, on track and off track. [Laughs]

TD: How do you beat a driver like Lewis? Is there something specific about the way he drives that you have to counteract in your own approach?

MV: I mean, a lot about it is the whole package. Of course, he has been in the best car for three years now, so that helps a lot. That doesn’t take anything away from Lewis, because he’s a very talented driver. He’s naturally gifted. That’s the difference compared to his teammates, for example, that’s why he’s winning the championships. He’s better than everyone around him. Hopefully, next year we will have at least a similar package so I can take up the challenge, but we have to wait and see.

TD: With that in mind, how do you feel about the development of Red Bull's 2018 car? I know you've said that you wanted to get it out earlier next season.

MV: Yeah. It’s a bit difficult to say how good it will be right now, but I think we’ve learned our lesson this year. We need to perform better in the beginning of the season, and like you said, get it earlier, fix things earlier. We don’t even need a lot of days, just running time. We need to do laps to understand the car. In preseason this year, we were really far behind compared to Mercedes and Ferrari in terms of the laps we’d done. It’s very crucial information, so that’s what we have to try and change for next year.

TD: You've still got one more year with Renault as Red Bull’s engine supplier, ahead of the upcoming changes being debated for next decade. What's your take on that?

MV: I think next year is pretty settled, so it’s more the years after that I think about – even I don’t know what’s going to happen with our team. But I’m not too worried about that. For next year, hopefully we get some more updates from the engine side, because this year the biggest updates were in the fuel and the oil from Exxon Mobil. That’s great, but I hope that Renault finds some more performance.

TD: Speaking of next season, what's your stance on the cockpit halo?

MV: I mean, I hate the halo [Laughs]. All right, I don’t like the halo. Maybe that’s a better thing to say. But I’m really against it. I don’t think it’s Formula 1. Of course, I understand the safety aspect of it, but at the end of the day, there are a lot of sports where it’s a dangerous game, and they don’t really change anything because that’s just the nature of the sport. I think now you’re basically changing the nature of Formula 1 and I think that’s not correct. But at the end of the day, it’s not our call. Rules are rules, and we just have to make the best of it.

TD: Before we get there, though, the Brazilian Grand Prix is coming up in a little over a week. Last year, obviously we saw you make that incredible push from 16th to 3rd in the final laps on a wet track. It was pretty insane. As Red Bull team boss Christian Horner said, maybe some of the best driving we’ve ever seen in modern F1. Were you just in the zone? Do you remember it clearly, or were you sort of one with the car, and your mind was almost on autopilot?

MV: Yeah. I’ve enjoyed driving in the wet since I was go-karting. But as soon as you have a good feeling with the car, and a good balance, you get more confident. You can brake later and harder. You can carry more speed through the corners, which heats up the tires more, which is crucial in the wet. The most important thing is to have confidence in the car, and that helped me pick up the field.

TD: Do you have any particular emotions coming into it this year? Are you hoping for another rainy race?

MV: I think we’d be a bit more competitive in the wet, of course. But our car lately, and the upgrades we have from the fuel side and the oils – that really helps us. I’m quite confident we can do a good job there. The only problem is that a lot of the straights are uphill, so that hurts us a little bit. But we’ll separate in the corners, so we can look forward to that. If it rains, it’ll definitely help.

TD: Speaking more generally, what is your approach to putting together a fast lap? What’s the balance between pushing the car to its limits 100 percent of the time, or keeping it on the racing line and maybe dialing it back a bit when necessary? Is it just back and forth?

MV: Well, let’s say in qualifying, you go 101 percent. You always go a little bit over the edge, you know, to try and achieve the most. But you cannot repeat that move 100 times in the race, because of the 100 times you do it, maybe 90 times it goes well, but the other 10 times you make a mistake. You’re pushing the limit, but that’s how you set a great qualifying lap.

TD: What is your relationship with Ricciardo behind the scenes like? And who do you think would win in a kart race?

MV: I would, because I’ve been driving since I was four years old. And I’ve got the best engines, because my dad tunes them. [Laughs] So I’d win. But he’s a great guy. Of course, on track we try to beat each other. But it builds respect, and off track we can have a good laugh. We don’t hide anything in terms of setups, we really share everything to get the best out of the car, and I think that’s very important.

TD: I'm sure you don't want to dwell on the past, but I gotta ask about the pass that wasn't at the U.S. Grand Prix in Austin. None other than Niki Lauda called your penalty the worst decision he'd ever seen in all his years with the sport. What's the fix there going forward?

MV: Yeah, it’s difficult to say. A bit more consistency would be nice. We have to look into what we do with stewards – maybe have the same stewards for the whole season. But that’s a long conversation, and we’ll see what we can improve for next year.

TD: What's your favorite track on the schedule?

MV: Spa, because it’s kind of like a homecoming for me. And I always enjoy driving there. It’s a great track – lots of fast corners, not too many stop starts. And especially during qualifying, it’s really enjoyable to do a lap.

MV: Right now I have the new Aston Martin DB11. It's a great car, you know, a GT. It's so great to drive. And it's beautiful.