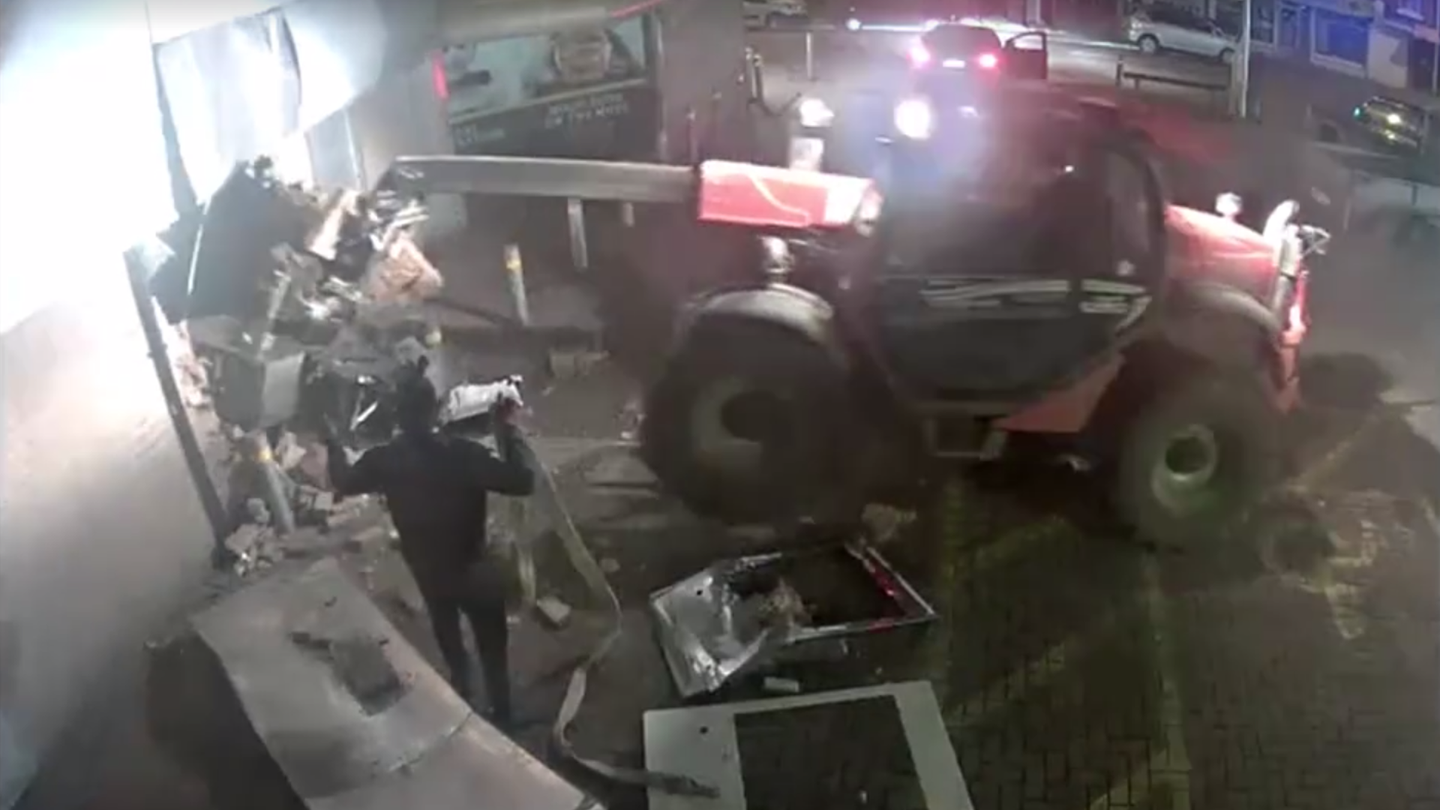 Police in England are searching for a crew of at least three thieves who were caught on camera using a telescopic handler to bust through an exterior wall of a local supermarket and extract the cash-stuffed ATM that was mounted inside. What, no Donald Trump masks this time? Sad!

The Derbyshire Constabulary released footage of the bizarre August 3 heist today after failing to track down the crew over the last two weeks. In the video, recorded on a parking lot security camera, the thieves arrive with the telehandler, a getaway car, and an SUV towing a small trailer. After blocking the entrance to the parking lot with the getaway car, the thief driving the telehandler lines up at around 0:40 and guns it straight into the wall.

It's worth noting just how unsubtle this whole operation is—they have a big noisy piece of construction equipment, they opt to keep the telehandler's flood lights on, and of course, they're ramming it into a brick wall. All in the middle of the night, surrounded by homes and apartments. Surprisingly though, not a single nosy neighbor comes out to investigate.

Predictably, the steel boom punches straight through the bricks, and the driver spends the next several minutes tearing large chunks out of the wall until he's able to pull the guts of the ATM out. Once that happens, one of the thieves ties a heavy strap around the ATM and the telehandler driver simply lifts it once more and drops it into the back of the waiting trailer. They then abandon the telehandler in the parking lot, hop into the two waiting cars, and take off to presumably figure out how to crack open the cash machine.

So where was, you know, the entire town and local police while all this was happening? In its post, the Derbyshire Constabulary notes that police arrived on scene just as the crew was making its getaway, and that one of the men threw a "metal bar" at officers. The decision was made not to pursue in the interest of public safety, and commenters on Facebook are currently raking them over the coals for that choice.

Police chase tactics are certainly a contentious subject, but whatever side you fall on it's also funny to watch whoever runs their Facebook account parry these attacks with some classic British sensibility. In response to one person accusing the force of "letting" the crooks escape: "There is no suggestion that we 'let them go', that would be extremely counter-productive. We did begin a search but unfortunately they managed to avoid us which is why we're now asking for the public's help, which is not uncommon practice."

The SUV, trailer, and ATM were all found abandoned about thirty miles away in the village of Markfield. There's no word on how much money the enterprising bandits actually made off with.

Admittedly, it’s probably the best use of a RAV4 we’ve ever seen.