It seems like cyclists getting struck by cars are becoming an increasingly caught-on-camera theme as of lately. Sometimes it might be the car's fault, while other times the two-wheeled variant may be the one to blame for the accident. Whatever the cause, this video showing a cyclist getting struck by a car in an Ottawa crosswalk might change the way you observe yourself and others on the road.

Reddit user 26Drunk decided to buy a dashcam. He went on Amazon and bought a $75 Auto-Vox dash cam, installed it in the car the night before filming, and set out for lunch with his girlfriend. To his surprise, within two hours of the camera's use, a cyclist blew through the intersection in front of their car, narrowly missing the couple. But the camera-car may have obscured the view for the cyclist, who wasn't so lucky when only moments later, another car collided with the bike, sending the rider and his bicycle flying through the air.

Fortunate for everyone involved, a police officer was close by who witnessed the incident as well, and was able to quickly tend to the cyclist to ensure injuries were minimal.

She witnessed everything and was immediately in position to help. The rider luckily walked away with a sore hip. The driver and his wife were fine.

The man behind the camera later takes to Reddit to inform readers that only ten months ago, this same intersection was the site of a fatal accident involving a truck and a cyclist. As a result, this particular intersection was called "unsafe" for cyclists by many. As both a cyclist and car enthusiast myself, I cannot stress the importance of being safe on the road. The video goes to show that no matter if you have two wheels or four, obeying the traffic laws and, more importantly, being aware of your surroundings when in a car or on your bicycle, can help to save your life, or the lives of those around you.

Update: Local news sources have reported that the cyclist has been charged with a traffic violation following the incident. 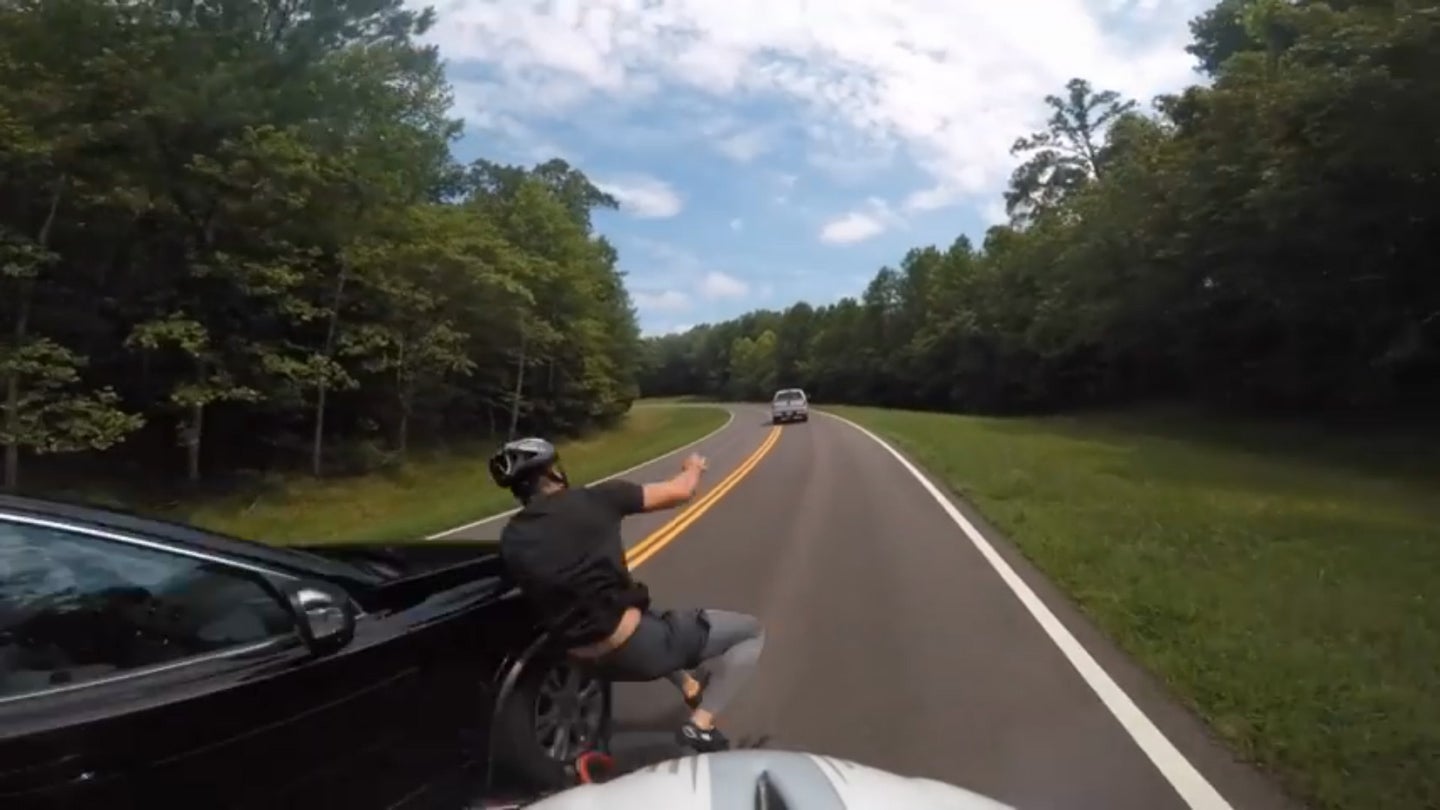 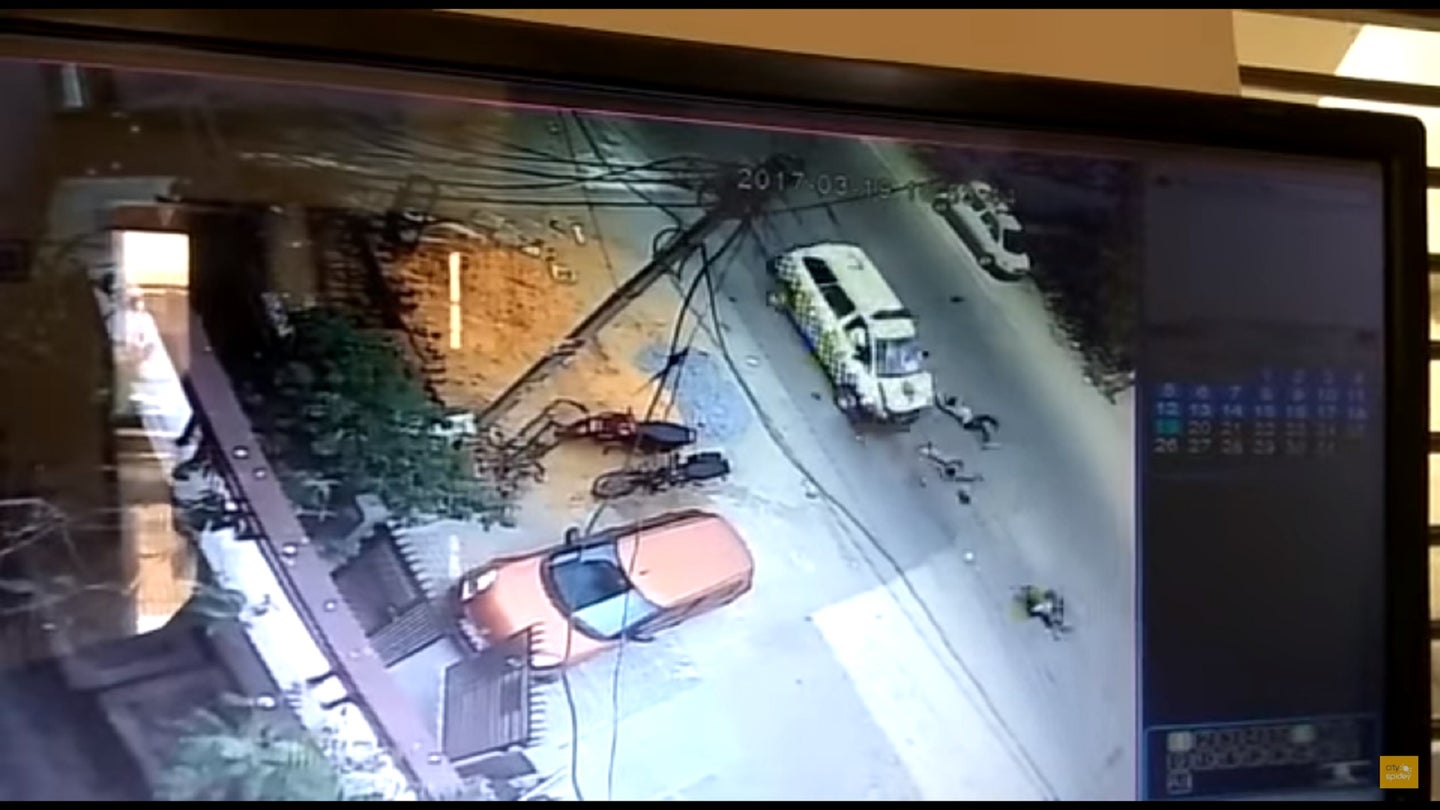 The crash caused two motorcycle riders to fall to the ground. 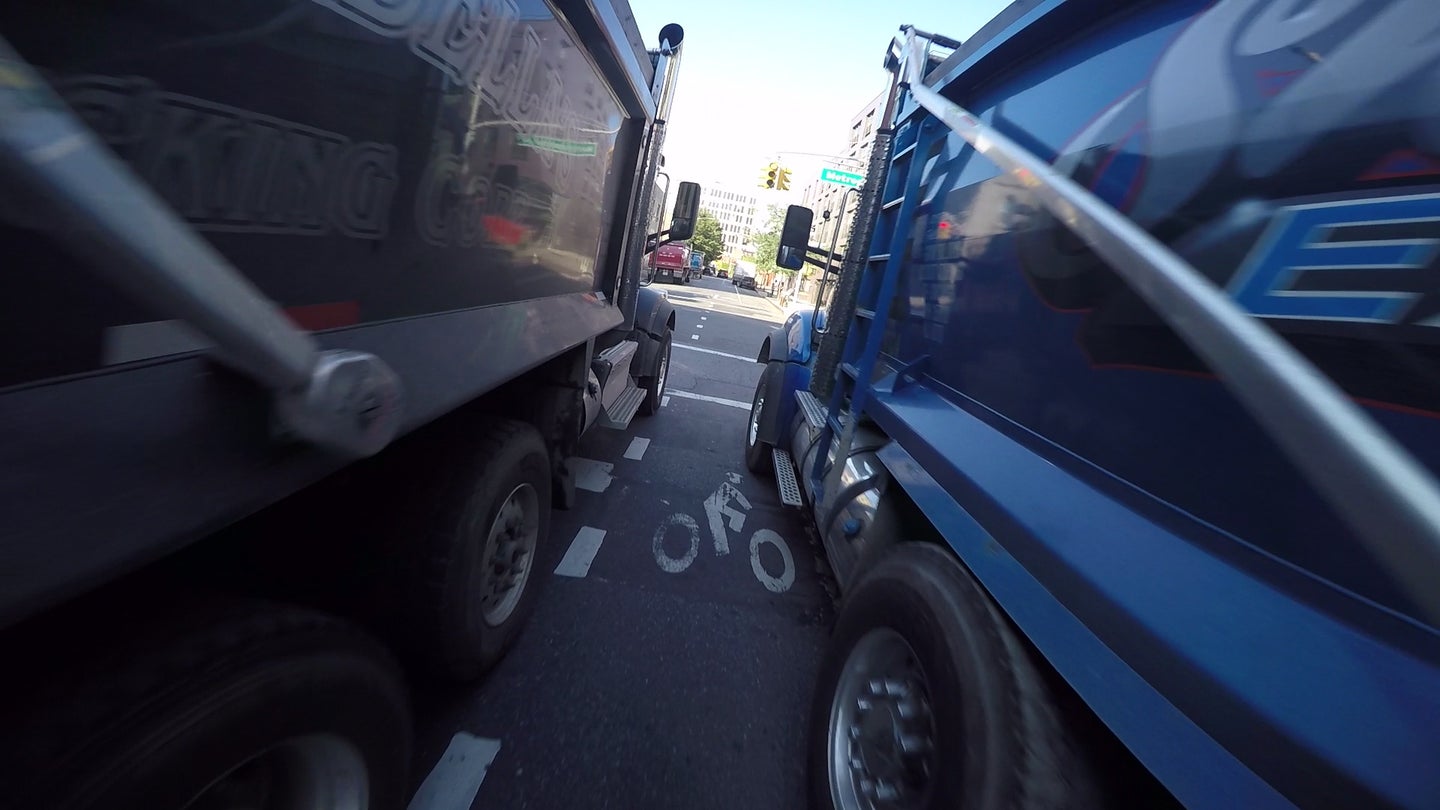 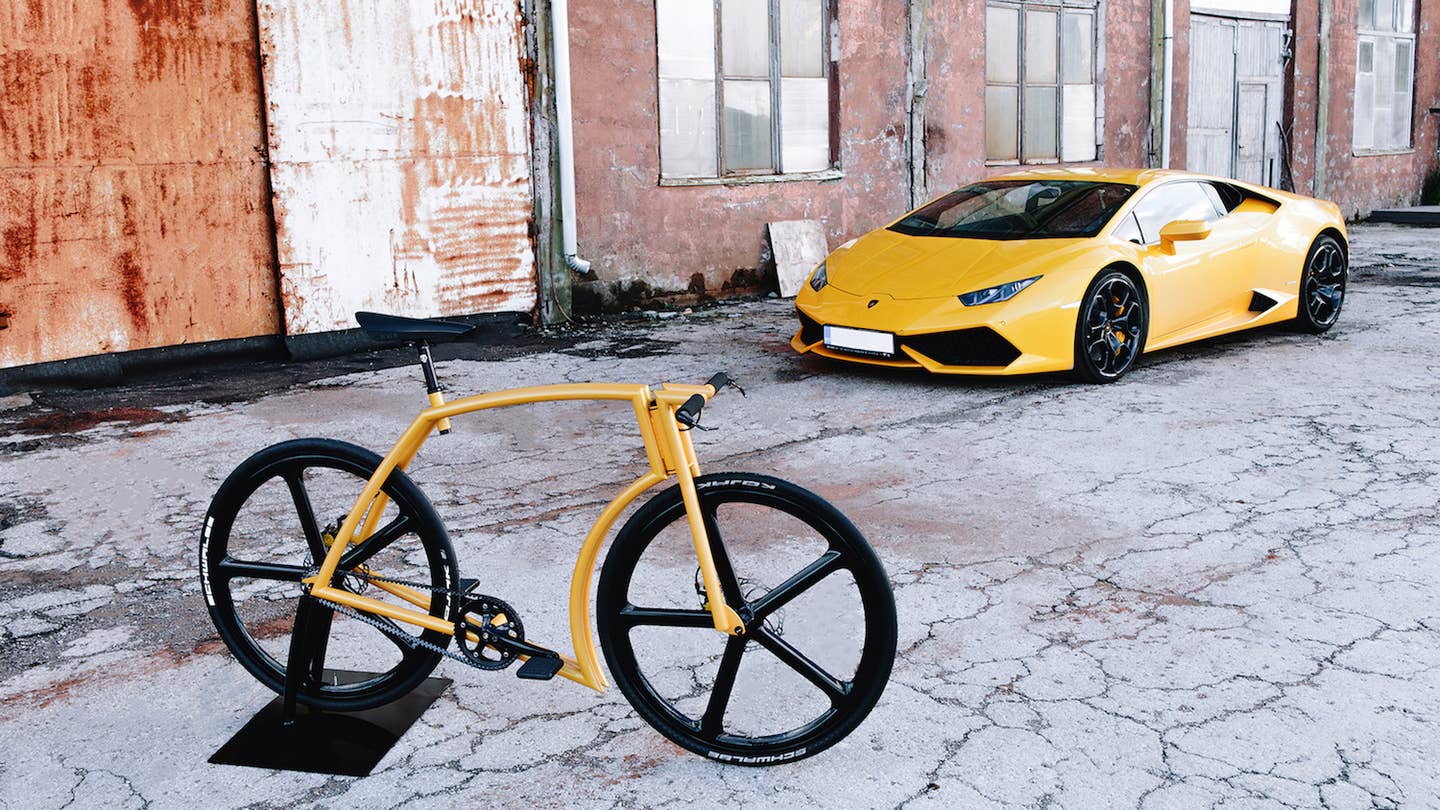 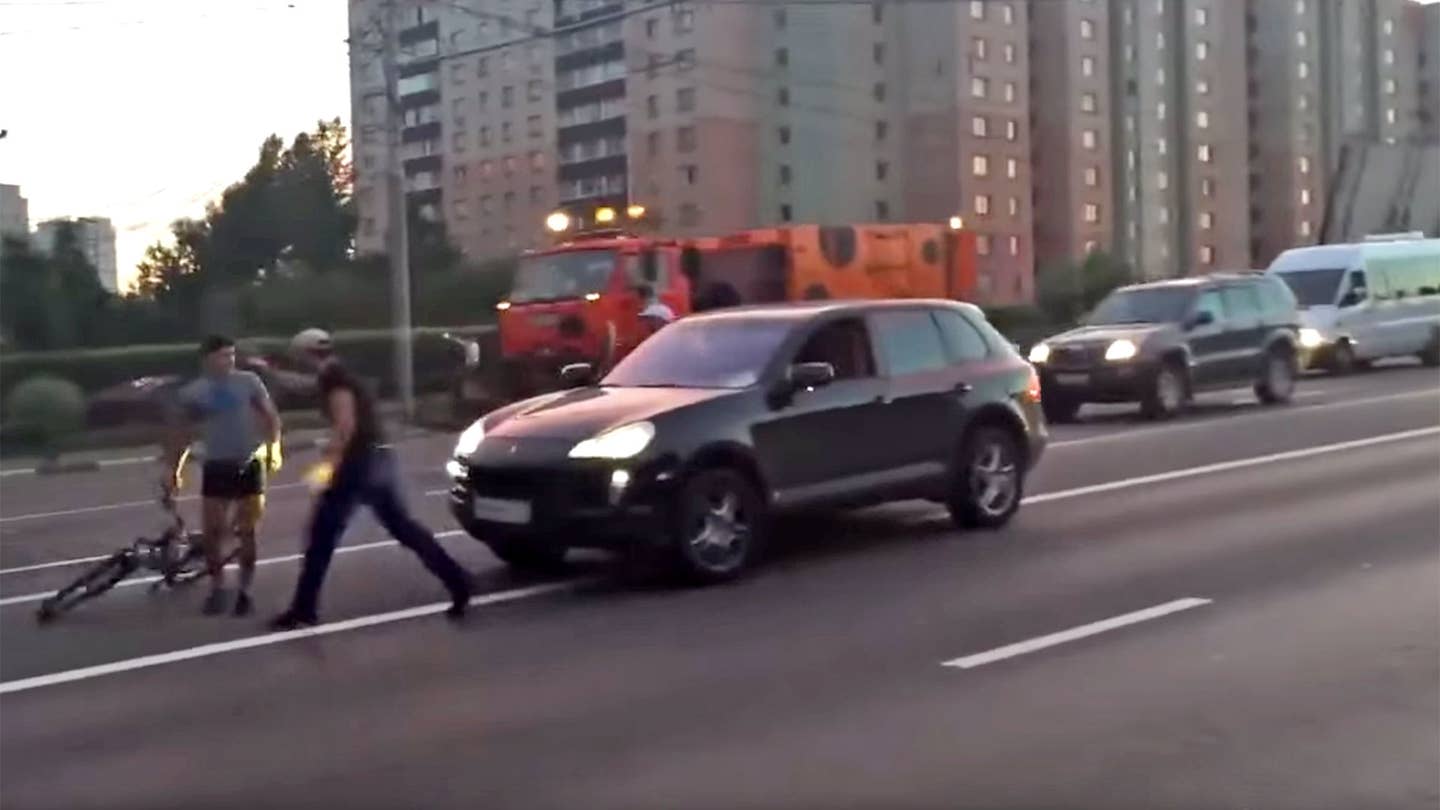