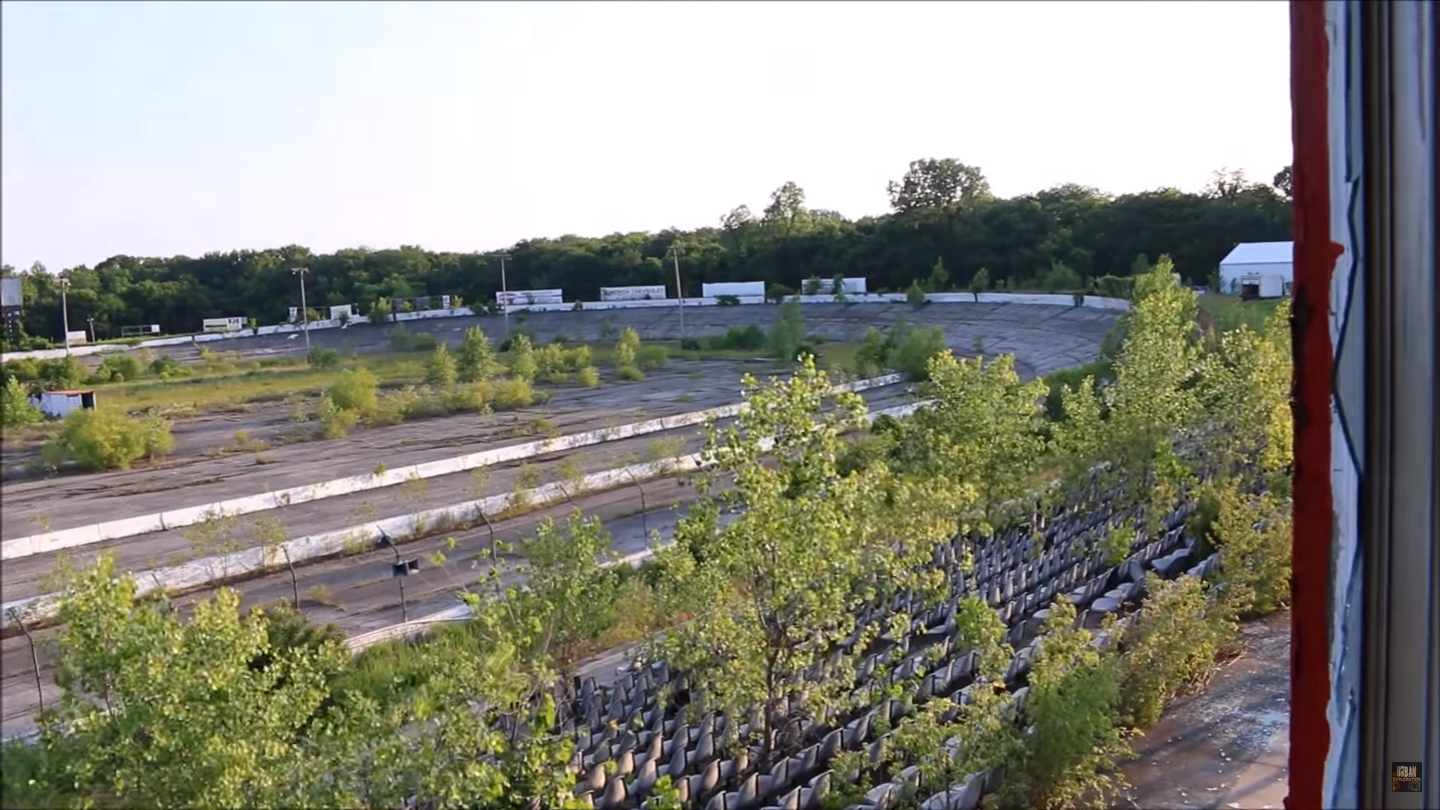 There's something about an abandoned property that stirs the imagination. The sight of nature reclaiming what was once a well-used, built-up area is a stark reminder of our own temporality in this world, no matter how indelible our marks may seem at the time. And an abandoned racetrack—well, it's hard to find a more evocative setting than that.

It didn't have to end this way for I-70 Speedway outside Odessa, Missouri. The high-banked half-mile oval opened in 1969 and hosted races every single year until its closure in 2008, helping to launch the careers of NASCAR drivers like Rusty Wallace and Clint Bowyer, and short track legend Larry Phillips. The speedway hosted the typical ecosystem of small-town racing—late models, modifieds, super stocks, enduros—as well as NASCAR Craftsman Truck Series races for a period in the late 1990s.

It was an incredibly popular during its heyday. With an unusually high banking on the turns, it was reportedly one of the faster short tracks out there. Video from 1995, the first year the Craftsman Truck Series used the track, shows a bustling infield, crowded asphalt, and most importantly, a packed grandstand. The grainy footage feels like an artifact from a bygone era, even though we're less than a generation out from those days.

The downfall was swift. A string of different owners in the twilight of the twentieth century robbed the place of its operational consistency, all while I-70 Speedway tried to cope with the same forces that doomed so many small-town tracks—economic troubles, a shrinking fan base, and increased liability concerns. A last-ditch effort to register the track with the American Speed Association to provide some stability yielded little more than a nostalgic press release. In 2008, at the onset of the financial crisis, its last owner closed the doors and walked away for good.

It doesn't feel like enough time has passed for the place to be in literal ruins, but this is I-70 Speedway today:

As you can see, nature has made short work of just about everything. Large trees have sprouted out of mere cracks in the concrete grandstand, trashed outbuildings are near collapse, and the line between infield and asphalt is blurrier than ever. Still, there's an amazing amount of detritus from almost forty years of racing—everything from commemorative plaques to waiver forms to race cars themselves—simply left to rest in peace.

Be sure to stick around for the explorer's "victory lap" around the crumbling track on his motorcycle. Compare that to what drivers in the Craftsman Truck Series saw from behind the wheel twenty years ago: