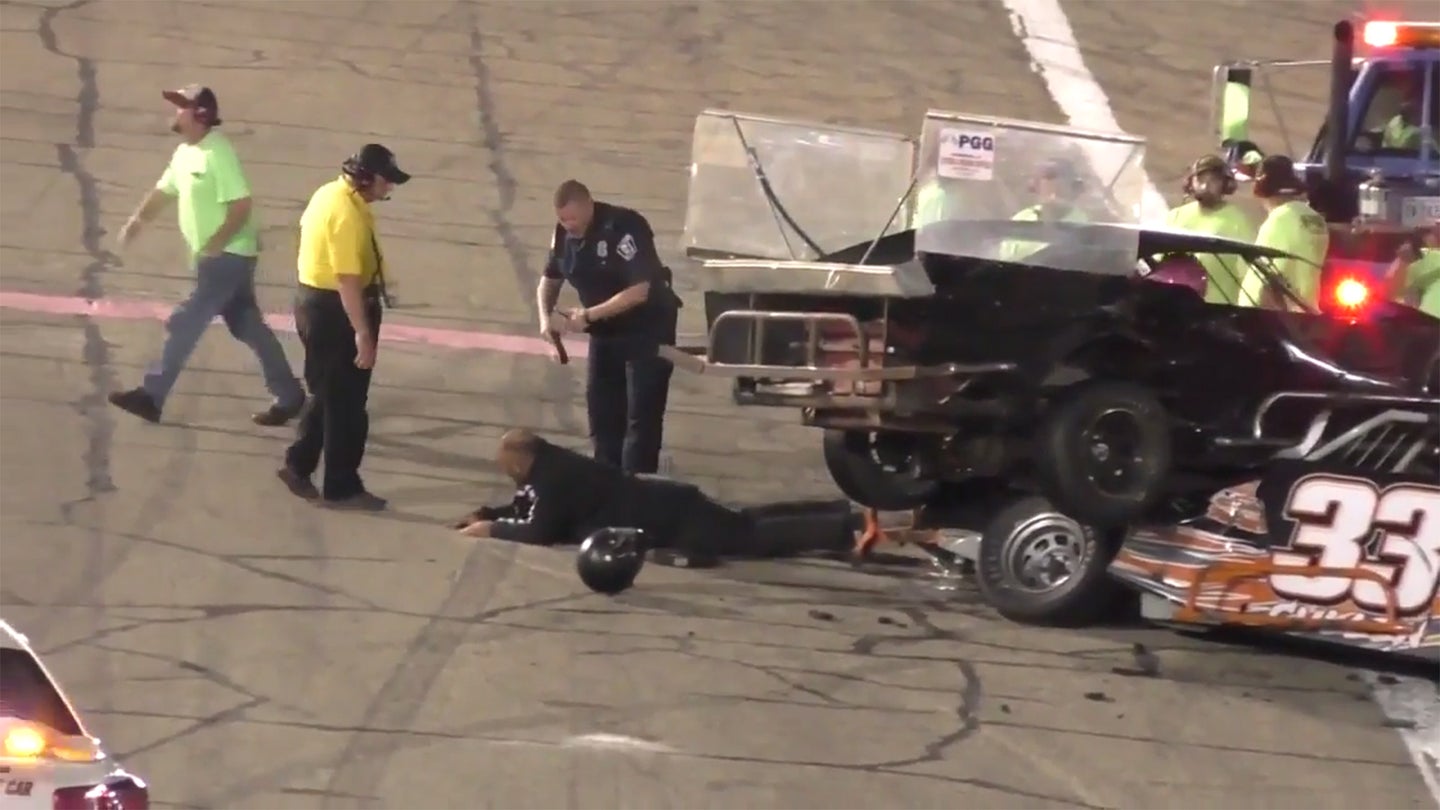 A figure-eight race isn't quite the pinnacle of polite motorsport, but the Saturday night feature event at an Indiana speedway got far crazier than anyone could have imagined this weekend. Tensions between two racers boiled over into a wild fight, one that started with some intentional ramming and ended with one man getting tasered on the track—and both parties under arrest.

Anderson Speedway hosted a 10-race Stock Car Festival on Saturday, but it wasn't until the second-to-last race that competitors Shawn Cullen and Jeffrey Swinford got tangled up. According to the official recap, the pair traded paint several times throughout the event before things totally unraveled on lap 24, when Cullen was forced into the pits for a tire change. He rejoined the field while driving under caution behind the safety car...and that's where the video below begins.

After the green flag dropped, the pack barely made it half a lap before Cullen bumped Swinford on the inside of a turn and spun him out. The collision also damaged Cullen's steering, and he coasted through the infield and stopped on the front straight.

Meanwhile, Swinford turned the right way 'round and immediately gunned it towards Cullen's crippled car. After a few angry hand gestures, Swinford floored it and rammed Cullen's car, mounting the hood in the process.

Meanwhile, Cullen jumped out of the wreckage, ran around to Swinford's car, and immediately started punching him through the open window. Track security guards stood there helplessly until a uniformed police officer came running in from the stands and tasered Cullen to stop the fight.

Both men were led away in handcuffs, and the owner of the track told the Anderson Herald Bulletin that Swinford has been banned for life from racing there.

"We actually had a great day of racing up until then," owner Rick Dawson said. "Swinford just got mad and used his car as a weapon. We've never had anything like that happen. It's just beyond my comprehension."

Whether or not you think Cullen deserved some form of retribution for a pretty obvious PIT maneuver on Swinford, resorting to violence is a guaranteed way to get yourself kicked out of a race. Cars aren't toys—a little more wheelspin on Swinford's ramming attempt and he could have speared right into Cullen's door. There's no excuse for this kind of behavior, especially among 40-year-old men.

Cullen will reportedly also face some sort of disciplinary action, but mainly for exiting his car during an active race.