Watch Courtney Force Walk Away After Her Funny Car Blows Up

When Funny Cars fail, they fail in the most spectacular way. 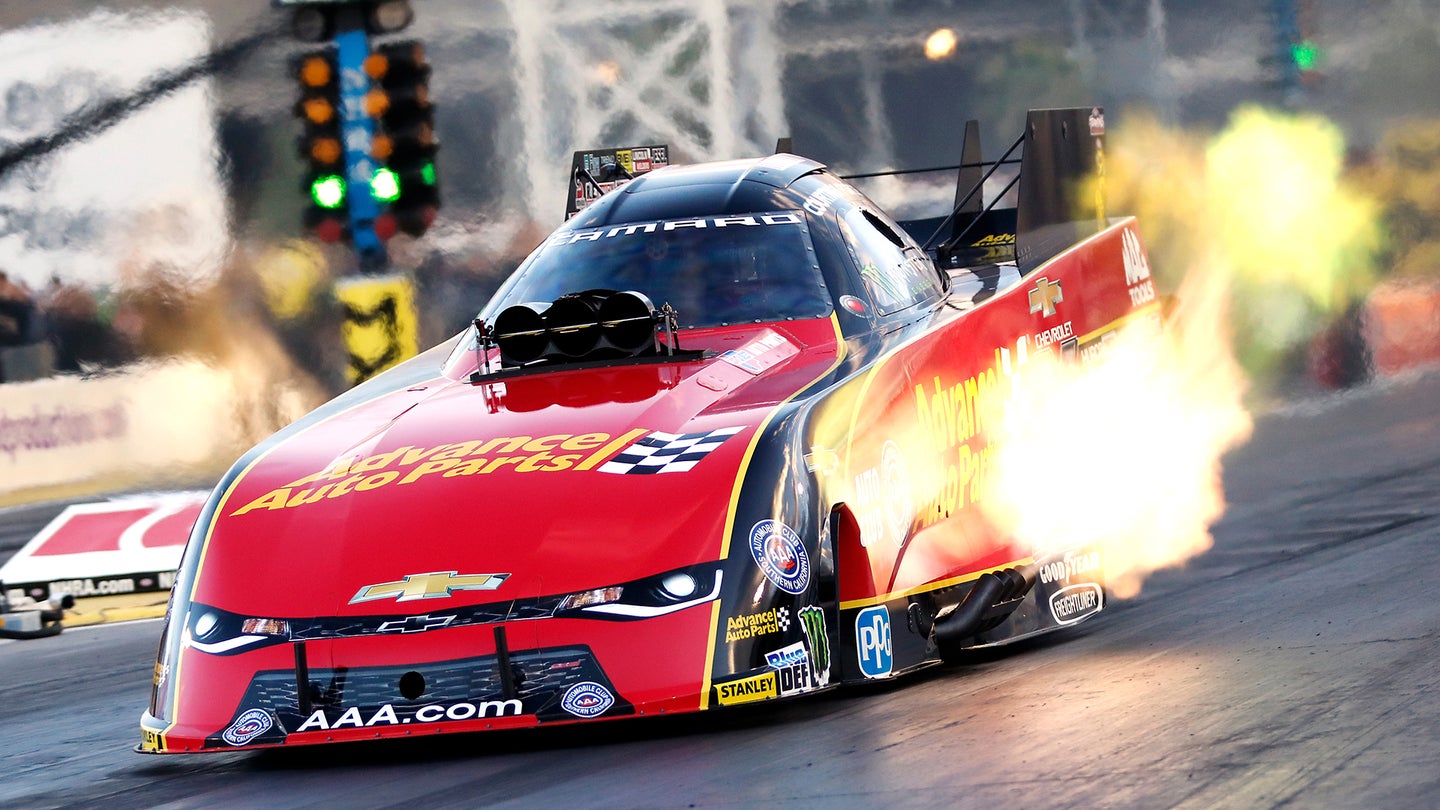 On Friday, at qualifying for the NHRA New England Nationals, Courtney Force had a slight mishap with her Funny Car. It blew up while rocketing down the strip at 330 mph. After the explosion, the car hit the wall, eventually came to a stop, and she hopped out like it was no big deal.

As with any form of racing, engine tolerances in a Funny Car are engineered to be on the verge of failure in an effort to get every last bit of power out of it. When engines on just about any other type of race car blow, the result is usually a little flame and some smoke. Sometimes, like in a recent IndyCar failure suffered by James Hinchcliffe, a large hole gets punched in the block (and through the floor of the car), and all of the car's fluids sadly dump out, forming a puddle of shame.

When it goes wrong in a Funny Car, it goes really wrong.

In a Funny Car, the engine is putting out somewhere in the neighborhood of 8,000 hp and 7,000 ft-lb of torque. In case you didn't know, that's a lot of power to send to two wheels. Everything has to work perfectly, every time. All that power is created by gallons of fuel per second getting pumped into and burned in the engine. When one little thing fails, the result is not pretty.

Once the engine is compromised, all that fuel still has to go somewhere and it still wants to burn. The resulting explosion rips the engine and body of the car to pieces in a matter of seconds.

Thankfully, this sort of thing is planned for. Besides being built for speed and power, the Funny Car engine is engineered to fail in a predictable manner. It's designed to give way at specific points, rather than having huge chunks of engine block randomly shooting out in any and all directions.

If you watch carefully when Force's engine lets go, you can see that the whole blower assembly is strapped on to the top of the block. When it explodes, this keeps all of the large parts from becoming deadly projectiles.

This isn't always the case, but more often than not, everything fails according to plan. Even after a successful run, the engine has pretty much destroyed itself and has to be rebuilt before it's next pass.

After the whole thing was over, Force seemed to take the explosion in stride, like it was just another day at the office.

Despite the blow up and a subsequent brake issue on the back-up car, Force is seeded in the second spot going into Sunday's elimination round. The time that got her that spot was from the run that ended in ka-boom.

If she advances to, and wins the finals, Force will be fighting for bragging rights at the next family dinner. Force is married to IndyCar's Graham Rahal, who won the first of two races in Detroit this weekend.

All of Sunday's NHRA action will be tape-delay broadcast on Fox Sports 1 at 4:30pm ET on Sunday, June 4.