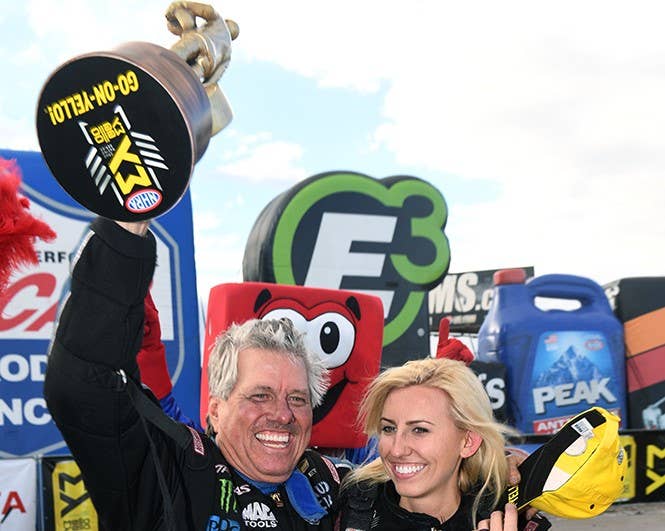 John Force is getting it done in the NHRA, but a little too late to contend for the championship. But the 67-year-old former truck driver from Yorba Linda, California, beat four drivers Sunday whose average age was 36, proof that experience can trump youth.

Force picked up his 147th win Sunday at the NHRA Toyota Nationals at The Strip at Las Vegas Motor Speedway. Force outran his daughter Courtney Force in Funny Car final, moving up from No. 7 to No. 5 in the point standings. But with just one race left, he’s not close enough to win the title.

“I never like defeating my daughter but we got two wins in the Countdown but we were just a little bit late. It is pretty exciting to see the stands that packed. We have sold out crowds and our TV with FOX is really hopping. I have young kids running this Peak Chevrolet led by (crew chief) Jon Schaffer. We are building a young group for the future,” said Force.

Courtney Force and the Traxxas Chevrolet Camaro took a starting line advantage, but at the end it was John with a winning time of 3.884 seconds at 327.19 mph against Courtney’s 3.906 second run at 325.85 mph.