Five Ways to Invest in Ferrari After its Monster IPO

You’re going to like the sounds of these blue chips. 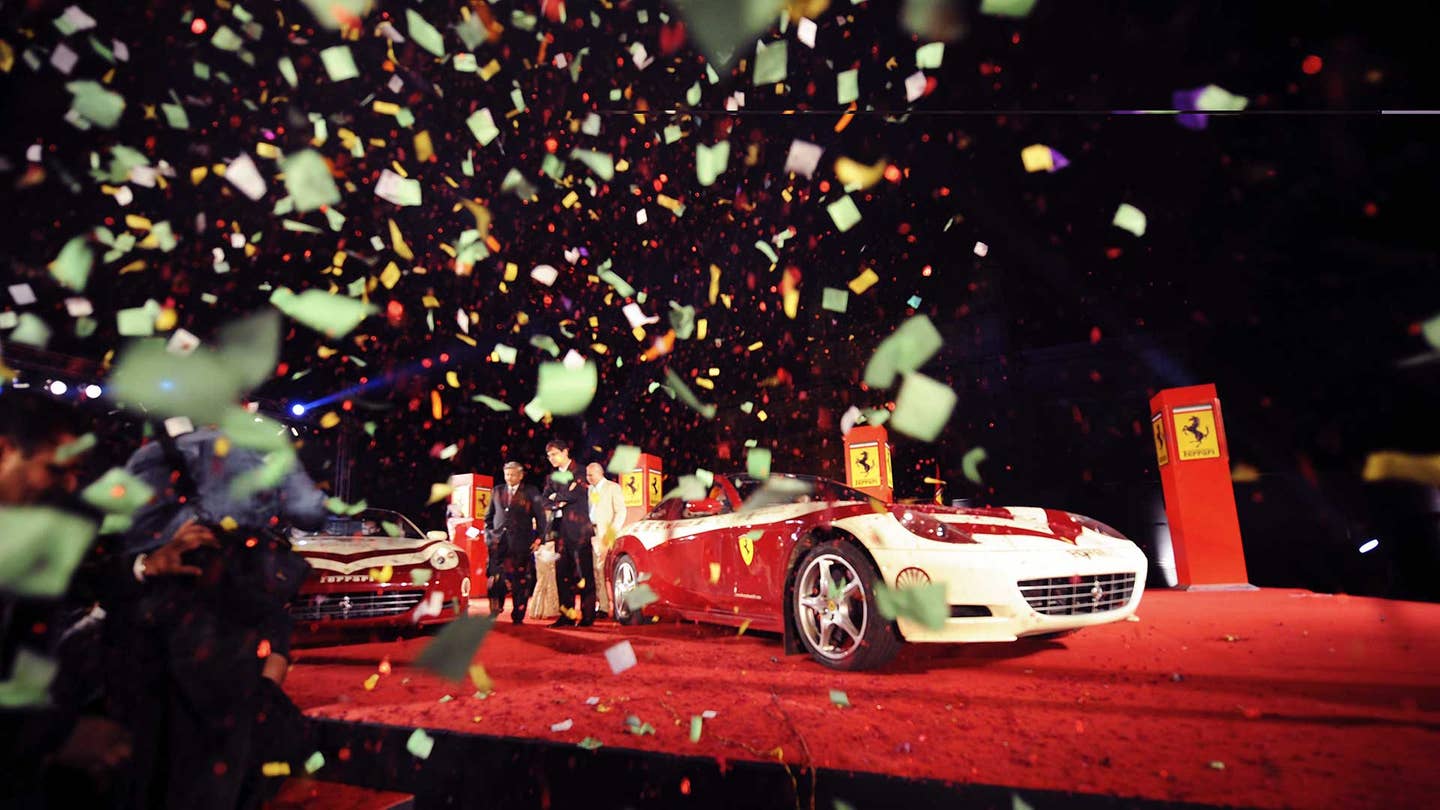 Even in the dry world of stocks, bonds and calculators, Ferrari is maintaining its customary machismo. The company will debuted a $11.9 billion Initial Public Offering under the incredibly muscular ticker symbol, RACE. Gird your loins, brokers. Ferrari is burning rubber all over the exchange floor.

The company's stock priced its initial public offering at $52 a share after the market close today. According to sources, the demand for shares was "well oversubscribed."

Unfortunately, absent a powerful stockbroker or a stable of Colombo V12s, chances are your portfolio won’t soon be padded with many shares of Ferrari’s blue-chip IPO. But fear not: There are solid ways for the moderately affluent to invest in Ferrari and harness the galloping returns of that iconic prancing horse. No worry, no stress, no fees.

The material asset? Ferrari’s cars, of course—altogether a more rousing investment than stocks. The top of that market remains silly hot—GTOs, 250 Californias and Lussos trade at seven and eight figures—and altogether inaccessible to the average investor. That’s why we’ve assembled a handful of options under $100,000, all of whose values are trending in tandem with their multimillion-dollar brethren. Any feelings of being left out of the scrum will dissipate as you stroke the fender of your appreciating neo-classic. A Ferrari in the hand, you know?

The Ferrari 400i has the dubious distinction of being the first Ferrari available with an automatic transmission, a soft-shifting three-speed GM unit. It is also the most rectilinear Ferrari, which knocks it out of alignment with the voluptuous Maranello output of the Sixties and Seventies. Yet with a proper five-speed, the 400i is a truly sporting drive, with a 310-horsepower V12 and pre-airbag, thin-rimmed steering wheel. Plus, the car’s clean aesthetic is beginning to be appreciated in its own right. Like the formerly unappreciated 330GT before it, the 400i is an undervalued Ferrari V12 with open road ahead.

Another V12, another unloved shape. While the 400i was criticized for its knife-edge styling, the 456 GT was labeled “a blob.” Uncharitably, it does have a touch of 550 Maranello too soon removed from the Jell-o mold; fairly, it bears the classic proportions of every front-drive Ferrari. The 5.5-liter V12 makes a mighty 436 horsepower and despite its prodigious output, remains one of the company’s most reliable engines. All the accouterments—Connolly leather, gated six-speed transmission, pop-up headlights—are included. We’d buy one and travel a few glorious miles while we waited for popular opinion to catch up with the beauty of this 2+2.

No small contingent finds the F355 to be the prettiest mid-engined Ferrari ever built. (Remember, a Dino is a Dino.) There’s no flab, with every excision marked by strakes, vents or inlets; the body is a study in tautness. An evolution of the 348, the F355 received five valves per cylinder and a slight displacement increase to, of course, 3.5 liters. As is always the case, the manual transmission cars are the most collectible.

This isn’t Magnum P.I.’s ride, but it’s close. The 328 GTB has a more powerful engine and an optimized shape, but maintains the delicacy of the original, 3-liter 308. Though a contemporary of the gargantuan Testarossa, the 328 avoids any of its decade’s excesses, and looks properly beautiful to this day. As a plus, the 328 is a rare mid-engine Ferrari whose engine doesn’t require removal before servicing. This particular car is rocketing skyward, with nicer examples gaining $25,000 in value in the last four months. Get shoppin’.

What is it about Ferrari 2+2s? The market runs toward anything with race experience or a raked windshield, leaving these GTs to languish. Well, all the better for you. Like the 456 before it, the 612 Scaglietti drove wonderfully but was criticized for its styling and footprint. Still, time has been kind to the 612, and it bears one of the last Ferrari V12s (shared with the 575 Superamerica)  hitched to a six-speed manual transaxle. The early models are reaching the basement of their worth: Strike while the iron (aluminum?) is hot.

All values via Hagerty.